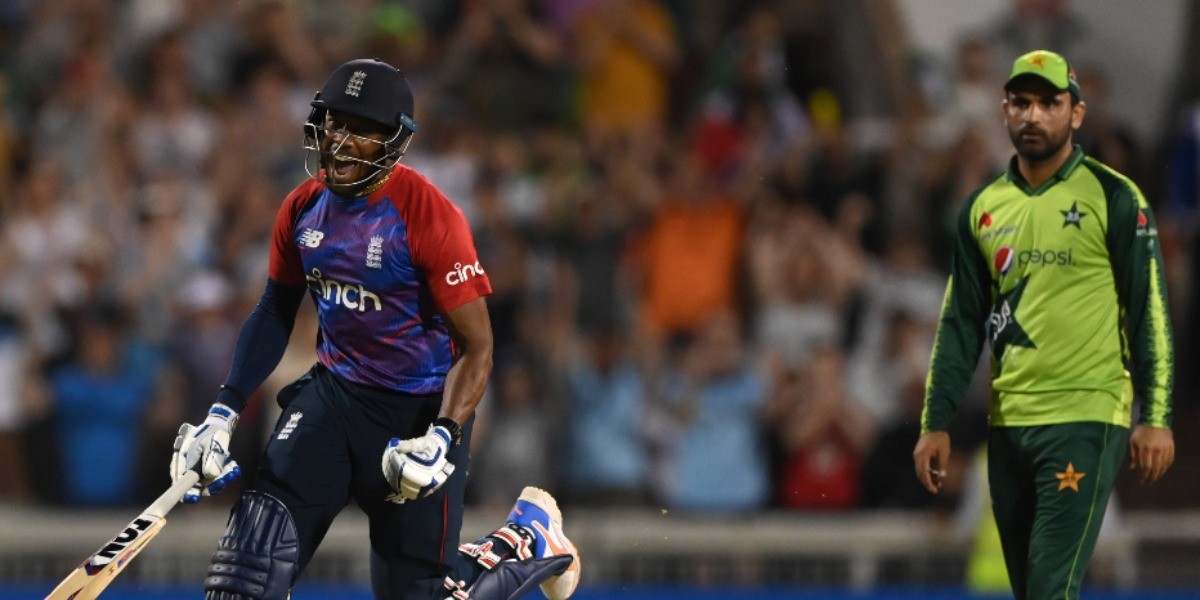 Jason Roy's swashbuckling 64 off 36 balls followed by skipper Eoin Morgan's 21 off 12 balls helped England beat Pakistan by three wickets to clinch the T20I series 2-1 in a thrilling encounter on Tuesday.

With the series tied 1-1, Pakistan skipper Babar Azam chose to bat after winning the toss at Old Trafford. On a slow pitch, Babar and Mohammad Rizwan got off to flier by adding 42 in 5 overs before leg-spinner Adil Rashid triggered a top-order collapse. He first got Babar stumped with a googly in the sixth over before removing Sohaib Maqsood and Mohammad Hafeez in quick succession, both caught on the boundary, in the ninth over.

Fakhar Zaman provided good support for Rizwan, who reached his eighth T20I fifty in 38 balls. However, Morgan's decision to bring in spinners Liam Livingstone and Moeen Ali dried up the runs for Pakistan who found it difficult to clear the long boundaries. Fakhar and Rizwan added 45 off 40 balls before Moeen trapped Fakhar leg before in the 16th over. Imad Wasim and Shadab Khan departed quickly while Chris Jordan gave away just five runs off the final over as Pakistan settled for 154/6 in 20 overs. Rizwan remained not out on 76 from 56 balls, while Rashid claimed his T20I career best of 4-35.

England began the chase aggressively with Jason Roy hitting Shaheen Afridi for four boundaries in the second over. Babar's decision to start with Imad Wasim's leg-spin troubled Jos Buttler, who struggled to get going. The pair put on 67 in 7.5 overs before Buttler skied Shadab Khan towards long-off where Babar took an excellent catch. Roy looked comfortable against the spin as he reached his fifty in 30 balls before miscuing Usman Qadir straight to Fakhar at long-off.

Pakistan's attack of four spinners pulled them back into the game as Imad got the wicket of Jonny Bairstow while Hafeez dismissed Moeen. Morgan, who joined Dawid Malan at the crease, found it difficult to score off the spinners as England needed 29 from 18 balls. However, the England skipper pulled things back with two massive sixes off Hasan Ali's 18th over.

With 16 needed off 12 balls, Hafeez castled Malan off the fourth ball but was helpless to prevent Liam Livingstone start with a towering six which brought down the equation. Livingstone was caught out off the next ball as England needed six runs off the final over. Ali, given the final over, got the wicket Morgan after dropping a catch off the first ball. Chris Jordan and David Willey then ran two doubles to seal a thrilling win for the hosts.