Sam Curran, expanding wings beyond his convenient mode of operation 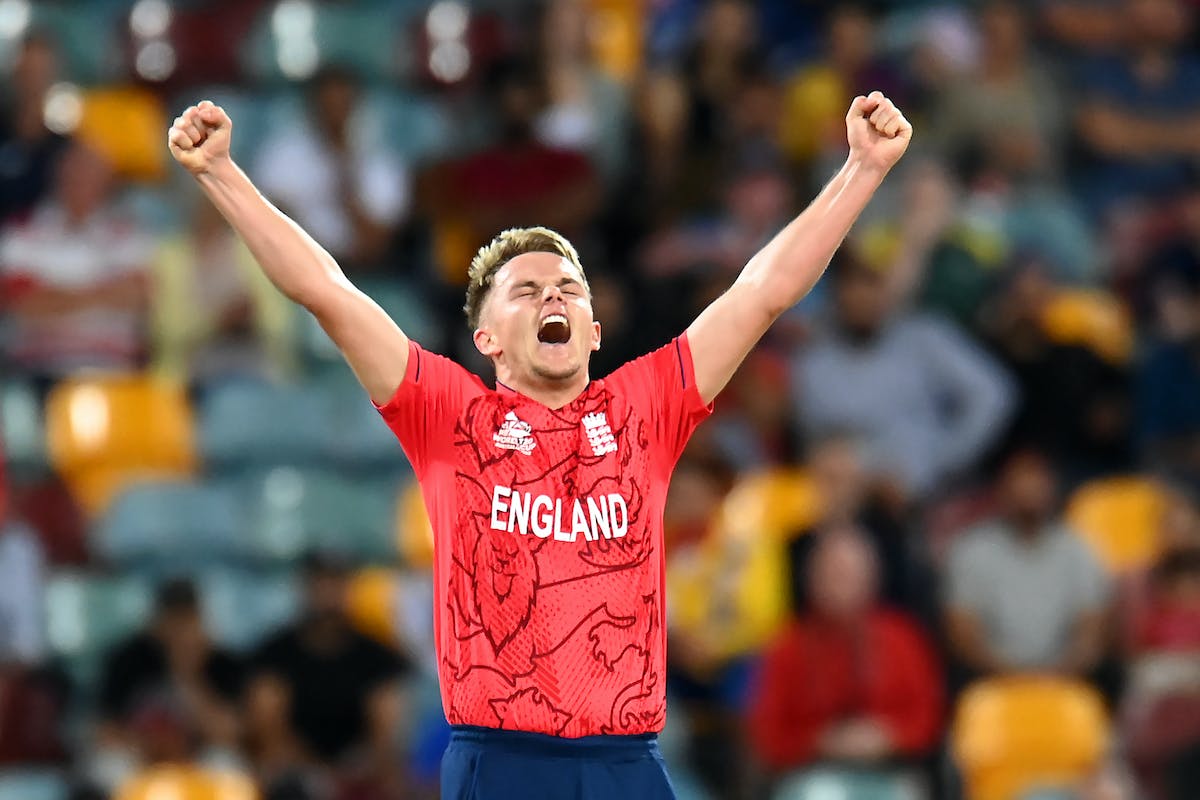 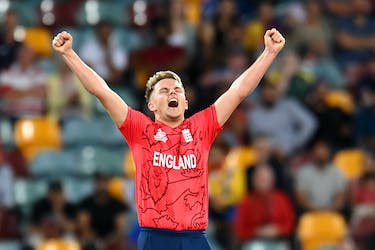 Sam Curran, expanding wings beyond his convenient mode of operation

From being a swing bowler to performing at the death, Sam Curran's development is a boon for England in this World Cup

Height - 1.75 metres. Slim built. Left-armer. At the first glance, knowing Sam Curran bowls seam up, you will guess he is a new ball bowler, tasked to swing the ball and curtail right-handers by bringing the ball in to them.

And that was the challenge for the left-hander. England have always been in danger of a pedestrian attack - pacers who swing the new ball but lack variations to have an impact in the death overs. The point is, Sam Curran didn’t have the role available to prosper with his modus operandi. However, there is no denying that he is a white-ball package. He is the best batter in England’s bottomless quiver of seam-bowling all-rounders which includes Chris Woakes, David Willey, and Chris Jordan for example.

Hence, it was important for England to find a role for Curran. He is too good a resource to let go. But the question remained, who is Sam Curran? Is he a batting all-rounder, a bowling all-rounder, an opening bowler, or just a bits-and-pieces of a cricketer? The death bowling duties were never a part of his resume.

That was a major area left for England to check in their weaker suite heading into the World Cup. The Three Lions eventually turned to Curran, as a means to include him in their World Cup plans. 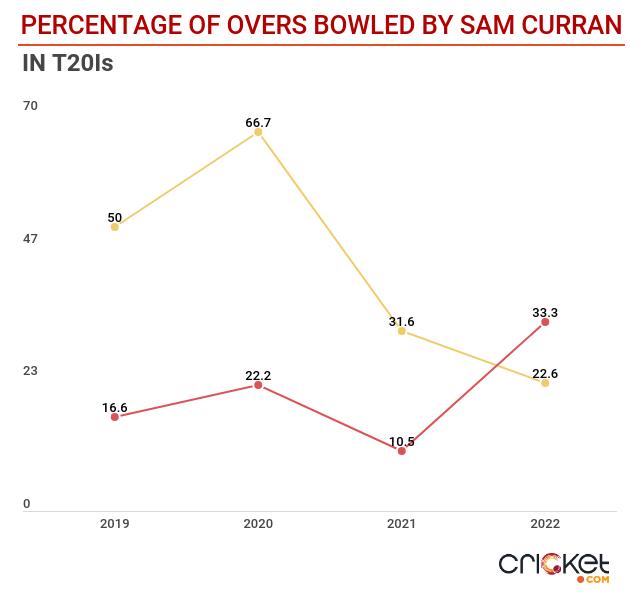 It is not that Curran had not bowled in the death before. But he was not the best in that business going around. In three years between 2019 and 2021, he bowled 27.7% of his overs at the death, conceding runs at 10.7 while picking 28 wickets at 20.2 runs apiece.

While these are decent numbers, something was still missing. Fair to say, England were taking a punt when they opted to use Curran the bowler majorly post the powerplay. But someone had to step up with likes of Woakes, Mark Wood and Reece Topley already earmarked for the new ball spells. It was more of a risk since Curran’s return from injury in July 2022 was his first match in the format in over a year.

“You don't just want to be a cricketer who is set for one role which I think is one of my strengths: to be as adaptable [as possible] for the captain and for guys in the team," said Curran prior to the seven-match T20I series in Pakistan in September 2022.

At this point, Curran has bowled 19.4 overs in overs 16 to 20, second only to Reece Topley, by just two balls. He has most wickets - 13 - at an economy of 8 runs per over. His bowling average is 12.2 runs per wicket. This is a remarkable improvement from his T20I death numbers between 2019 and 2021 mentioned above.

For starters, Curran is nailing his yorkers a lot more. From 4.8% of yorkers in the death overs between 2019 and 2021, the 24-year old has nearly doubled the tally to 9.4%. He has cut down on the full tosses considerably. He is yet to be hit for a boundary whenever he has pitched it in the yorker zone. 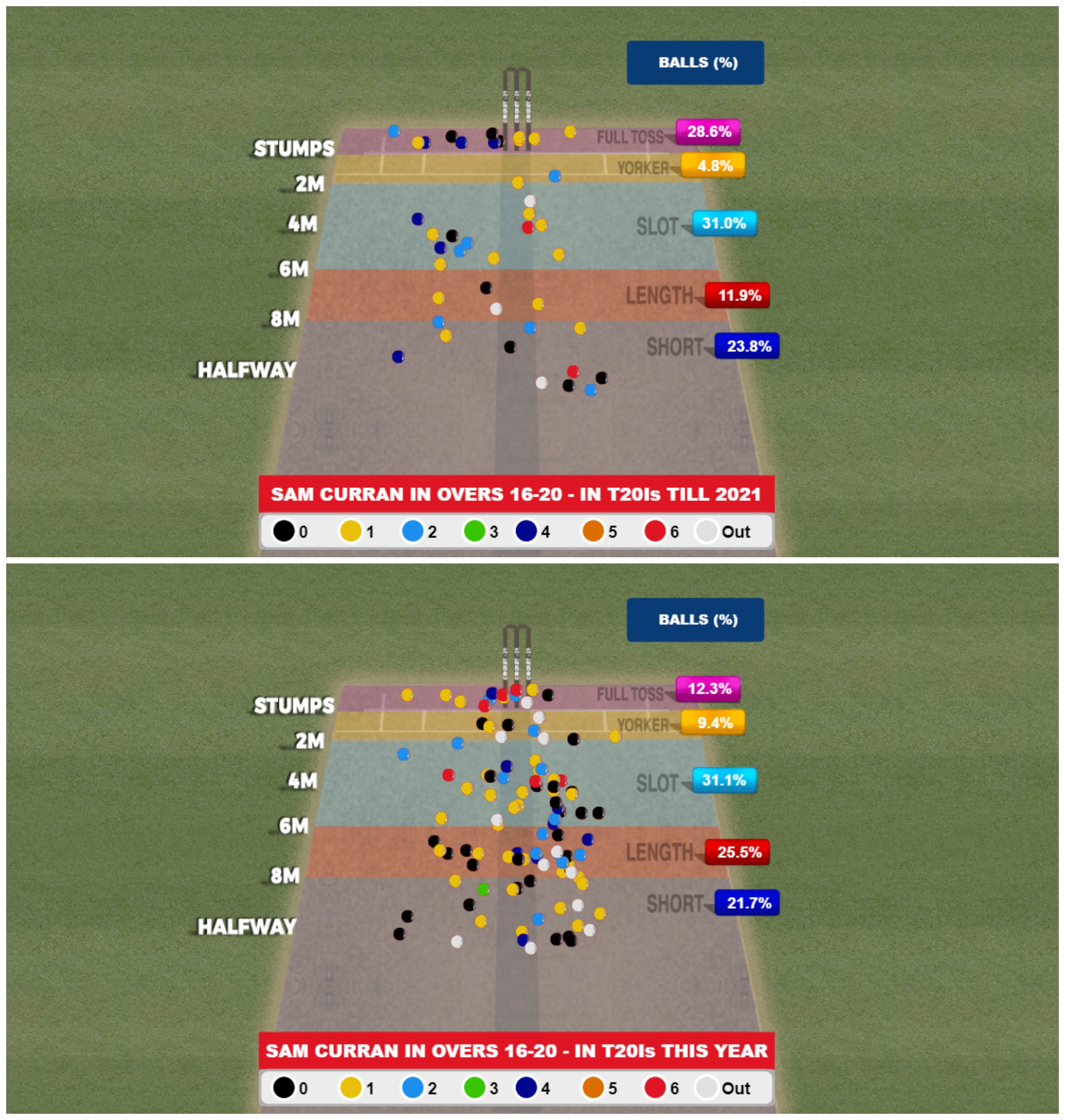 But that is not it. Curran has added many variations to his kitty. As the pitch map suggests, he is mixing the yorkers well with exponential growth in his length deliveries.

Using his left-armer’s angle, he has aimed for the wide yorkers. Many of them have been pitched in the slot or become a low full toss, but as long as the right-handed batters are reaching for it, they are not in full control. He has also beefed up on the back-of-the-hand delivery and slow bouncers that has kept the batters guessing.

You have to be consistent with your inconsistency during the death overs. For that, you need to execute multiple delivery types. The Surrey man doesn’t have a lot of pace but has mixed the line and length brilliantly to restrict the scoring opportunities for the batters. He has three wickets each on yorkers and bouncers which vindicates the same. The economy rate on both kind of deliveries is under 6.

There is a success story around the wide line to the right-handers. Until 2021, he went at 10.3 runs per over against right-handers at the death. That number has come down to 7.3 this year.

Facing New Zealand in a do-or-die game on Tuesday (November 1), Curran was the only pacer in the match who didn’t concede a boundary, delivering figures of 2/26 in four overs. It is a notable stat from this game given the pacers went at 9.3 runs per over. Pace was the easier bowling type to score against on a Brisbane pitch that had grip for the spinners. And Curran bowled some tough overs. 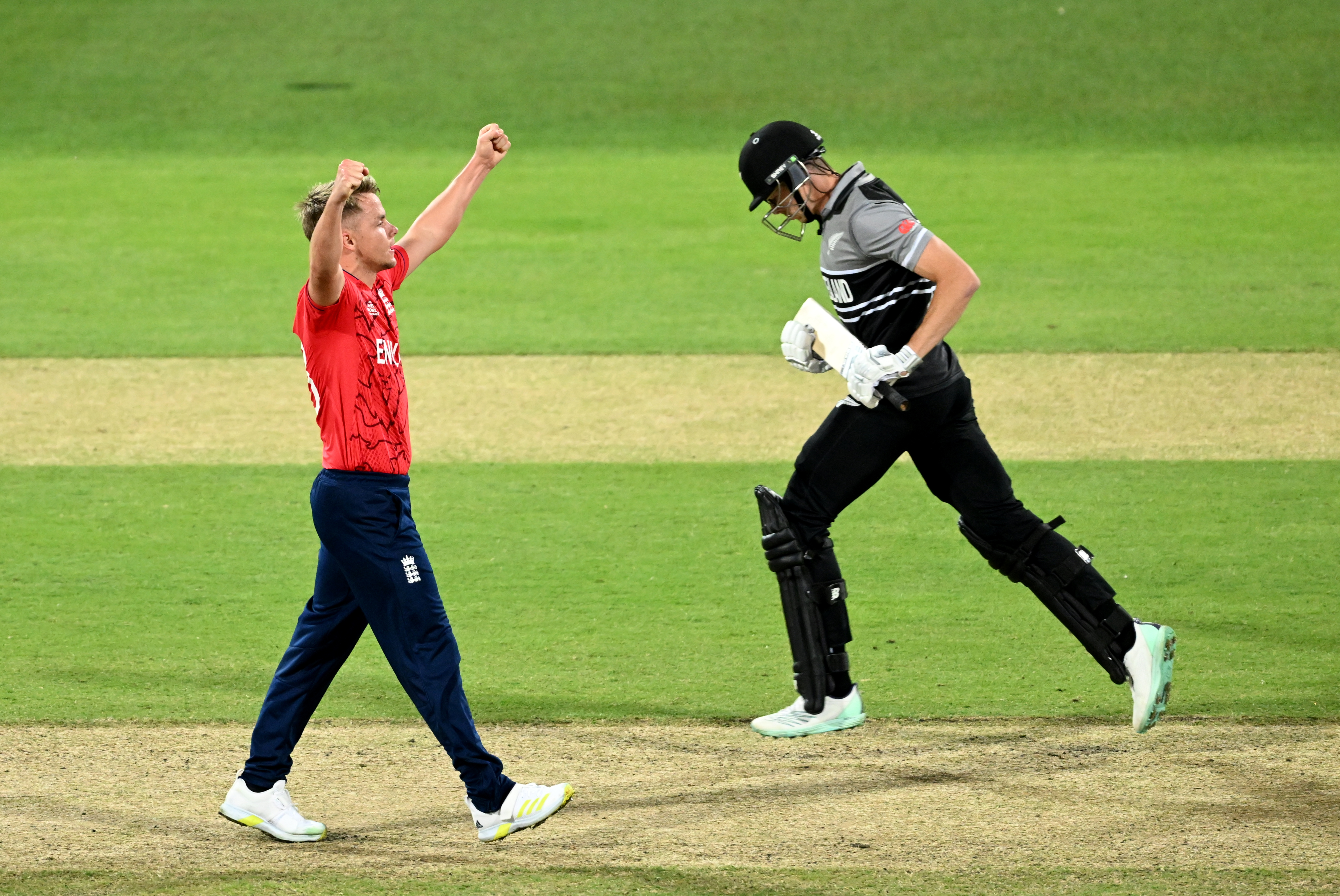 His first was the fifth over of the innings. By this time, the ball is not swinging as much as it did in the first couple of overs. The batting side is trying to accelerate, to make the best use of the field restrictions. Curran got the better of the most prolific powerplay batter since 2021 in this over - Finn Allen.

When he returned for his final spell - last two overs - in the 18th over of the run chase, the Kiwis required 49 runs to win. Curran killed the game within the first three balls, getting Glenn Phillips, New Zealand’s only hope throughout the chase, caught in the deep.

Curran also attributes his recent success to the consistency in chances. “A consistent run in the side has given me confidence,” he said after bagging a five-for against Afghanistan.

July 2022 onwards, England have featured in 19 T20Is now with Curran being a part of 16 of them. It is a considerable number given the Three Lions tried many players in the build-up to this World Cup. But Sam Curran was a constant.

He is a complete T20 package -  a good enough lower-order batter who can also be promoted in the batting order to attain favorable match-ups and a fast bowler expanding wings beyond his convenient mode of operation.

England invested in him and the results are there for everyone to see.