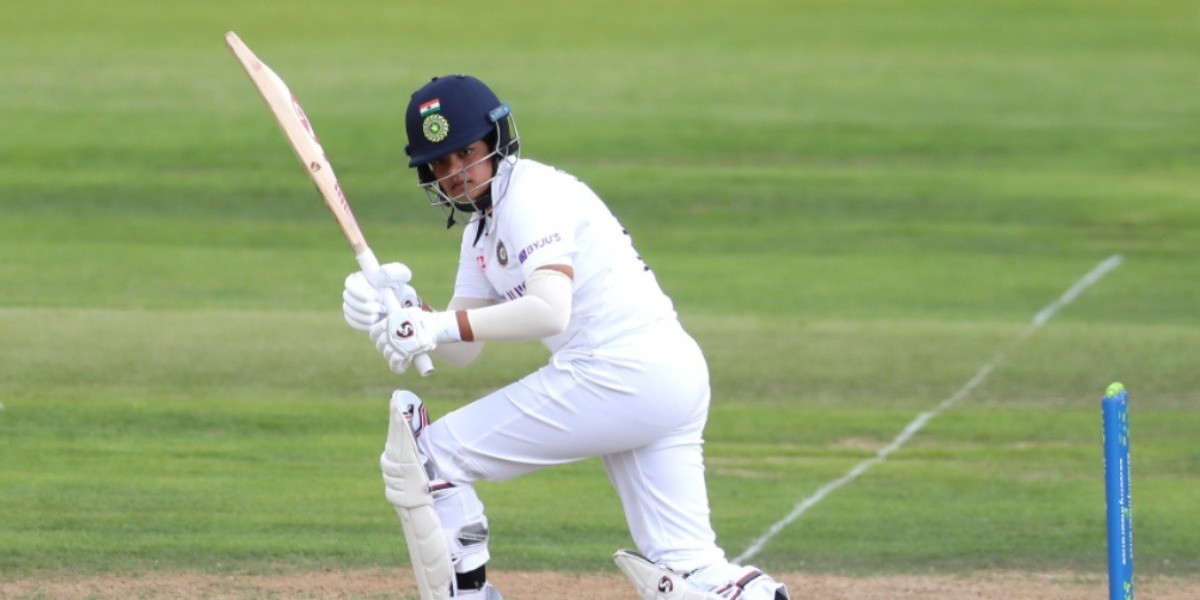 Shafali Verma continued to amaze the cricketing world with her audacious strokeplay as she became only the fourth player in the history of women's Tests to smash two half-centuries on debut, taking India to 83 for 1 at stumps on the third day of a one-off Test against England.

The teenage prodigy was batting on 55 not out off 68 balls in the Indian second innings when the day's play ended after the third session was washed out. Another debutant Deepti Sharma, who was promoted to number 3 after her resolute 29 not out in the first innings, was giving Verma company on unbeaten 18 after India were forced to follow-on.

Before Verma, Lesley Cooke (England), Jessica Louise Jonassen (Australia) and Vanessa Bowen (Sri Lanka) were the other players who have scored two 50-plus scores in their debut matches.

India trail by 82 runs with nine wickets in hand and they still need to do a lot of work to save the match on the final day on Saturday.

Only 45.5 overs were possible on the day with three rain delays or interruptions. With the third interruption, the umpires called for tea and that was the end of the day's play as the final session could not be resumed due to incessant rain.

The class and talent of Verma was written all over in her innings, studded with 11 fours as the England bowlers had no clue how to deal with the youngster under cold and windy conditions.

The Indian opener mixed caution with aggression as she sent the loose balls to the fence while leaving out the good deliveries.

The Verma-Deepti duo defied the England bowlers for 20 overs and added 54 runs in the post-lunch session which started 30 minutes late due to rain. England toiled hard for the whole second session without any success.

The other opener Smriti Mandhana was dismissed in the morning session for 8, caught in the slips off Katherine Brunt's bowling. Verma, who had hit 96 in her first innings, continued her impressive form as she hit six more boundaries in the second session.

Earlier, India Women were left with a mountain to climb after being shot out for 231 in their first innings, half an hour before lunch.

After a dramatic collapse on the second day on Thursday, India's batting woes continued as they lost five wickets for the addition of just 44 runs in 21.2 overs in the morning session, completely undoing the tremendous effort by Verma (96) and Mandhana (78).

Deepti (29 not out) and Pooja Vastrakar (12) put up a 33-run stand for the ninth wicket but could not save the team from following on in response to England's first innings total of 396 for 9 declared.

India scored their first run of the day after 20 balls and by then had lost two wickets, including the crucial one of vice captain Harmanpreet Kaur. She was out after an England went for review in the second over of the day without adding anything to her overnight score of four. She was ruled leg before off Ecclestone.

Tanya Bhatia fell two overs later without disturbing the scorer after facing six balls. She too was dismissed by Ecclestone, who then accounted for Sneh Rana (2) with a turning delivery to reduce India to 197 for 8.

England took the new ball after 80 overs and the Indian first innings ended 1.2 overs after that with the dismissal of Pooja Vastrakar (12) and Jhulan Goswami (1).