Shafali vs Brunt: A battle to savour for the ages 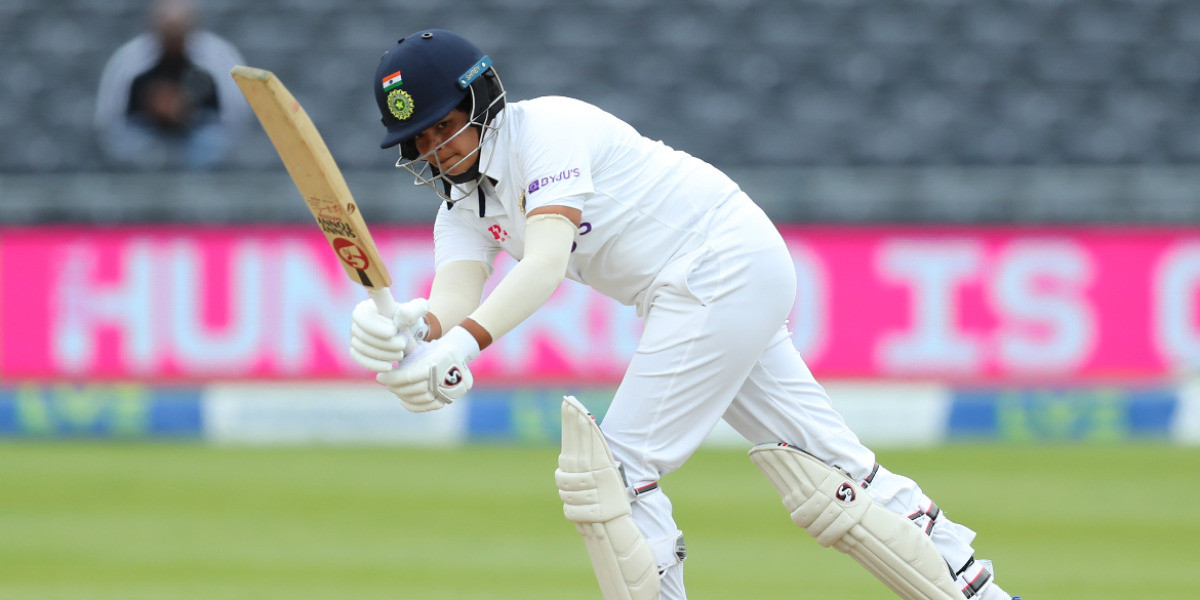 Shafali vs Brunt: A battle to savour for the ages

The trap that England laid to tackle India's teenage sensation

While the world of cricket was busy revelling in the intriguing summit clash of the World Test Championship, little did they know, the Indian women's team too was battling it out in the longest form of the game.

Away from the glaring eyes of the media, the young Indian contingent set foot at the County Ground in Bristol against England after a seven-year-long hiatus away from the Test arena for one of the historic days in the women's sport.

While the first day of the one-off Test for the visiting side was spent chasing leather, the subsequent days showcased glimpses of the riveting contest between two of the most dominant sides in world cricket.

With 396 runs on the board and a handful of people cheering the home team, it was time for Shafali Verma to take centre stage in her maiden appearance.

One of the stalwarts of England cricket, Katherine Brunt, with the new ball up against a child prodigy in her debut game, is precisely the reason Test cricket is the most challenging format of the game.

With constant chewing of the gum, a couple of solid defences and a streaky boundary to get off the mark, Shafali was up and running in the innings.

Displaying an array of strokes all around the ground, she fell agonisingly four short for her maiden century in the first innings. With a patient and matured 63 in the second innings, she announced her arrival at the international arena in the most challenging format.

In a month of fascinating content between two high-quality players with plenty of ebbs and flows, it was the veteran bringing in her wealth of experience in asserting her dominance against the teenage sensation. 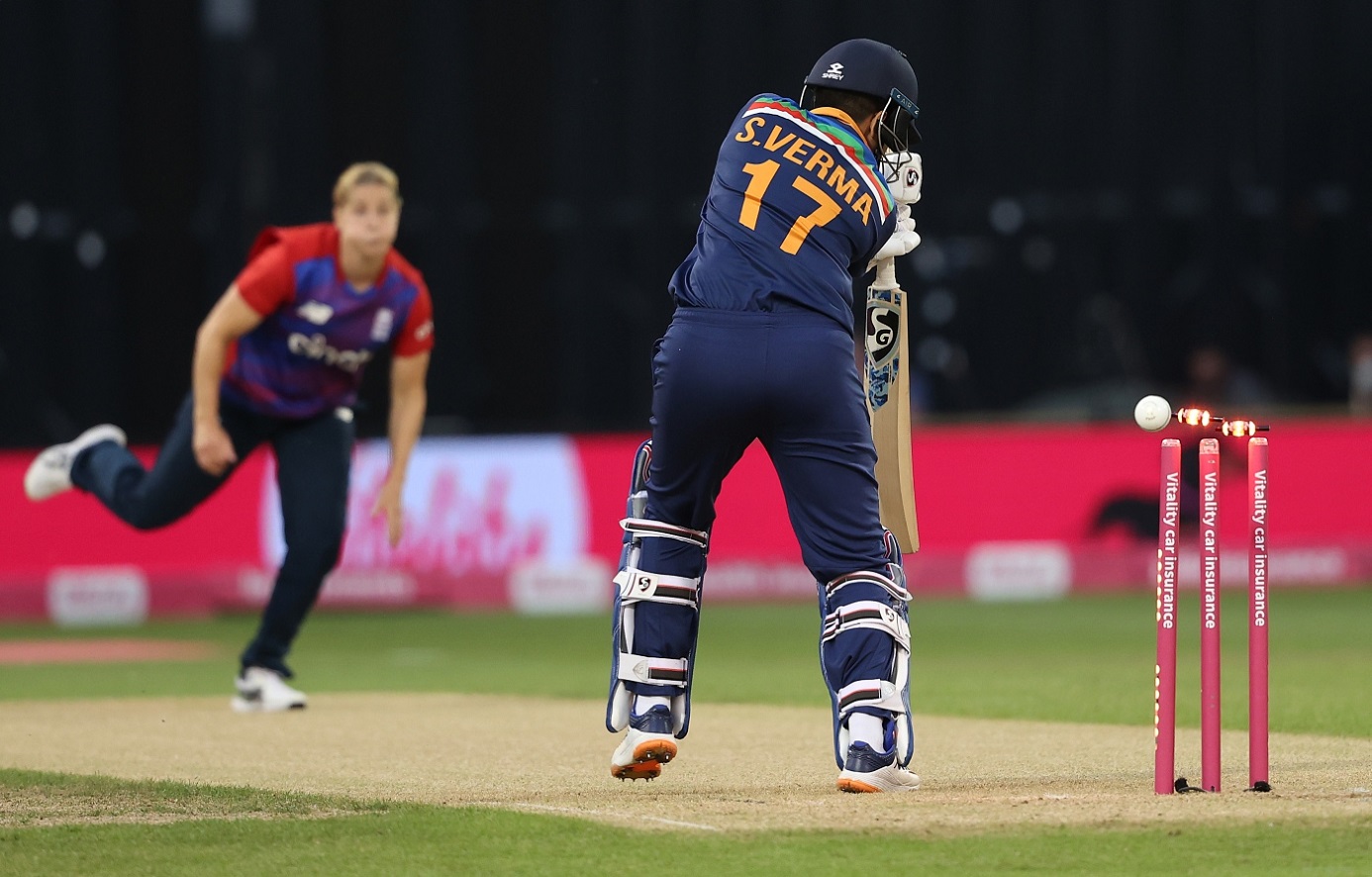 After toiling hard and dominating most of the game, Shafali's solid foundation at the top of the order and Sneh Rana's grit were the significant reasons for the home team failing to secure a famous win. Four gruelling days of red-ball cricket ending with an escape for the Indian team, England returned to the drawing board bruised.

As the two sides locked horns at the same venue, albeit in a different format, Brunt and England deployed a different strategy to tackle the resilient force of Shafali. With a barrage of short pitch deliveries targeting the body, Brunt exposed a possible chink in the armour of the youngster.

In the six limited-overs games, Brunt and the pace attack persisted with the rising deliveries, angling towards the body to unsettle her. While Shafali struggled with this new ploy initially, she tackled this in an unusual manner by creating room for herself and getting outside the line of the ball.

A detailed analysis post the completion of the series highlights that the opening batter scored 81.8% of her runs against pace in the deep mid-wicket and third-man region during the second T20I, the only one in which she got off the mark.

Why is that the case? To anything outside the line of the stumps, Shafali opened the face of the bat and carved it between point and third-man. Also, with the back leg firmly grounded, she moved the front foot away from the line of the delivery, allowing herself a full swing of the bat towards the on-side.

However, whilst this opened up areas on the leg side which helped her amass plenty of runs, it also exposed her stumps. In two of the three games in the T20 series, Shafali was cleaned bowled by the veteran trying to attempt a slog towards the leg side.

Furthermore, the England team management ensured she does not plant her front foot and attack the bowling unit down the ground as they hardly bowled anything in her arc to allow for swinging through the line. 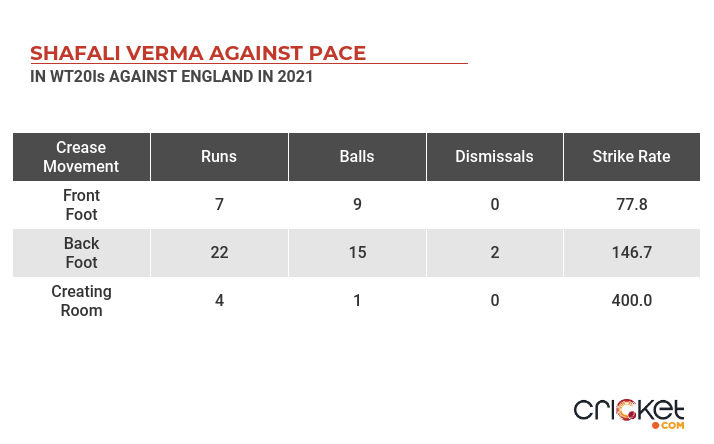 Despite this meticulous planning, Shafali enthralled millions of fans with her attacking style of play against Brunt in the second match of the T20 series. Backing away, she smashed five consecutive boundaries in the fourth over to swing the momentum back in favour of the visiting side.

However, the England team and Heather Knight missed a trick in the field by not placing the fielder in the proper position. With the line of attack set to be around her body, the home team would have benefitted with the deep fielder stationed at cow corner instead of an orthodox deep mid-wicket. The lack of control on connecting the rising delivery would have offered catching opportunities for the fielder in the deep whilst also saving plenty of runs.

A stern test awaits Down Under

While the world saw glimpses of her impeccable talent across the multi-format series, her journey from the age-group cricket to donning the national jersey inspires millions of people. Hailing from Rohtak, Haryana, Shafali showcased her immense talent on the world stage with some breath-taking performances.

However, one significant concern for the team management before the much-anticipated tour to Australia will be her back foot play. While Brunt exploited it in the white-ball format, the likes of Ellyse Perry and Tayla Vlaeminck will look to expose the chink in her style of play and dent the Indian batting unit on their tour Down Under.