The incident reportedly took place during day two of the match between Dhaka Division and Khulna Division in Khulna.

Hossain, who took more than 100 wickets for Bangladesh between 2005 and 2015, faces a one-year ban for his actions.

“Under the level four offenses a player will be banned from participating in any BCB competition for one year while he will be slapped with a fine of Tk 50,000,’’ a Bangladesh Cricket Board official was quoted as saying by ‘Cricbuzz’.

“Shahadat accepted the verdict and returned home. We have given the report of the match referee to the technical committee and they will decide his future but he has been barred of taking part in this NCL game,” he added.

Hossain reportedly lost his cool when Arafat questioned his ability to shine one side of the ball. 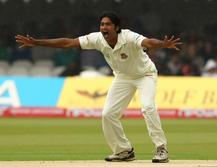