In the last 40 years, only three players from West Indies have scored twin hundreds in a Test match. Shai Hope is the 3rd after Brian Lara against Sri Lanka (2001) and Kieran Powell against Bangladesh (2012). Hope scored 147 and 118 not out at Headingley to see his team home and registering only their 4th overseas win in the last 20 years, excluding Bangladesh and Zimbabwe, in 88 Tests. Those twin centuries against England at Headingley gave a glimpse of Shai Hope’s hunger, determination and the technique required to get the job done against a rampaging home team, who in the previous Test had claimed 19 West Indies wickets on a single day.

Since that innings, Hope’s Test career has taken a dip, but it has made him a powerhouse in the 50-over format. Without attracting much limelight, Hope has silently etched his names amongst the best West Indies batsmen of all time.

While wickets tumble around him, Hope absorbs the pressure early on and works hard for every run. Often criticised for his below par strike-rate, Hope perhaps deserves a bit of the stick especially considering how he goes about his business in the first powerplay. Among batsmen who have played at least 400 deliveries in the first powerplay this year, Hope has the worst strike-rate. But once he goes on to make it count, laying an excellent platform for the rest to follow.

But one also has to give him credit for the way he builds his innings – slow, yet steady. Seeing off the new ball is an under-rated skill in one-day cricket today and given that now there is a new ball at either end, it becomes all the more necessary for the openers to negotiate the early swing and bounce. As a result, teams have taken a cautious approach in the first 10 overs, where keeping wickets in hand has become top priority.

As a wicketkeeper he has been assuring behind the wickets, having inflicted 28 dismissals this year already. Only Tom Latham (30) and Alex Carey (34) have more. His wicket keeping has not affected his batting in anyway. In fact, he is up there among the best in the business.

Since Hope’s ODI debut, West Indies have won 21 matches and his contributions in most of them have been immense. Has was often juggled around in the batting order, but more often than not has managed to hold the innings together, thereby giving his team a great chance of winning. In fact, his strike-rate of 75.94 is the lowest among players who have played at least 20 innings in winning causes.

Many West Indian batsmen of late are nothing more than flash in a pan, but Hope is here to stay. While he as many greats before him, he backs his skill-set and also backs himself to get the job done for his side.

It’s a pity that West Indies wasted his talent at Nos 3 and lower, where he averages 37.69. Compared to his numbers as an opener, without a doubt, it looks very bleak. The next challenge will however be to score against the big teams in testing conditions. Against the likes of England (27.25), New Zealand (6.50) and Pakistan (30.25), he does not have the best of records, which he will look to improve upon. If West Indies continue to play him as an opener and also find a consistent partner for him, he will continue to win his side may more games.

Scoring another 227 runs this year will make him the highest run-getter for West Indies in a calendar year. Whether he breaks that record or not, in a few years’ time, Hope’s name could be taken in the same breath as some of the greats. He has already gotten the wheels rolling. 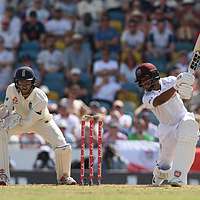