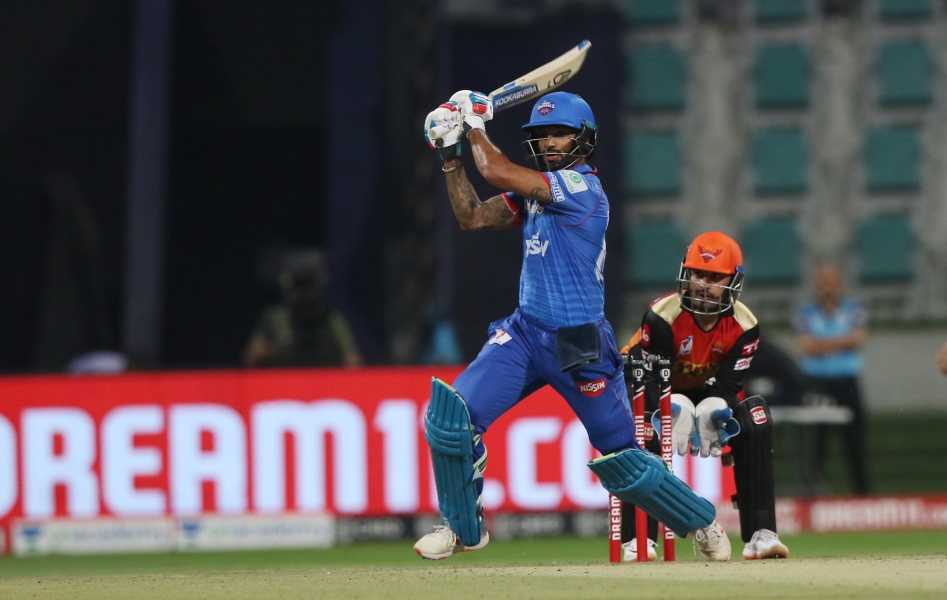 Delhi reached their maiden IPL final after defeating Hyderabad in Qualifier 2. Here are the major statistical highlights from the game:

The change in opening pair worked wonders for Delhi Capitals in Qualifier 2 against Sunrisers Hyderabad. Marcus Stoinis who has an average of over 50 as an opener since 2018 in T20s, came out to bat alongside Shikhar Dhawan. Stoinis was slow to start, but after a drop by Jason Holder when he was on three, he changed gears. The Stoinis-Dhawan pair smashed 65 runs without being separated at the end of the Powerplay. The 65 runs is the highest DC have scored this season in this phase. 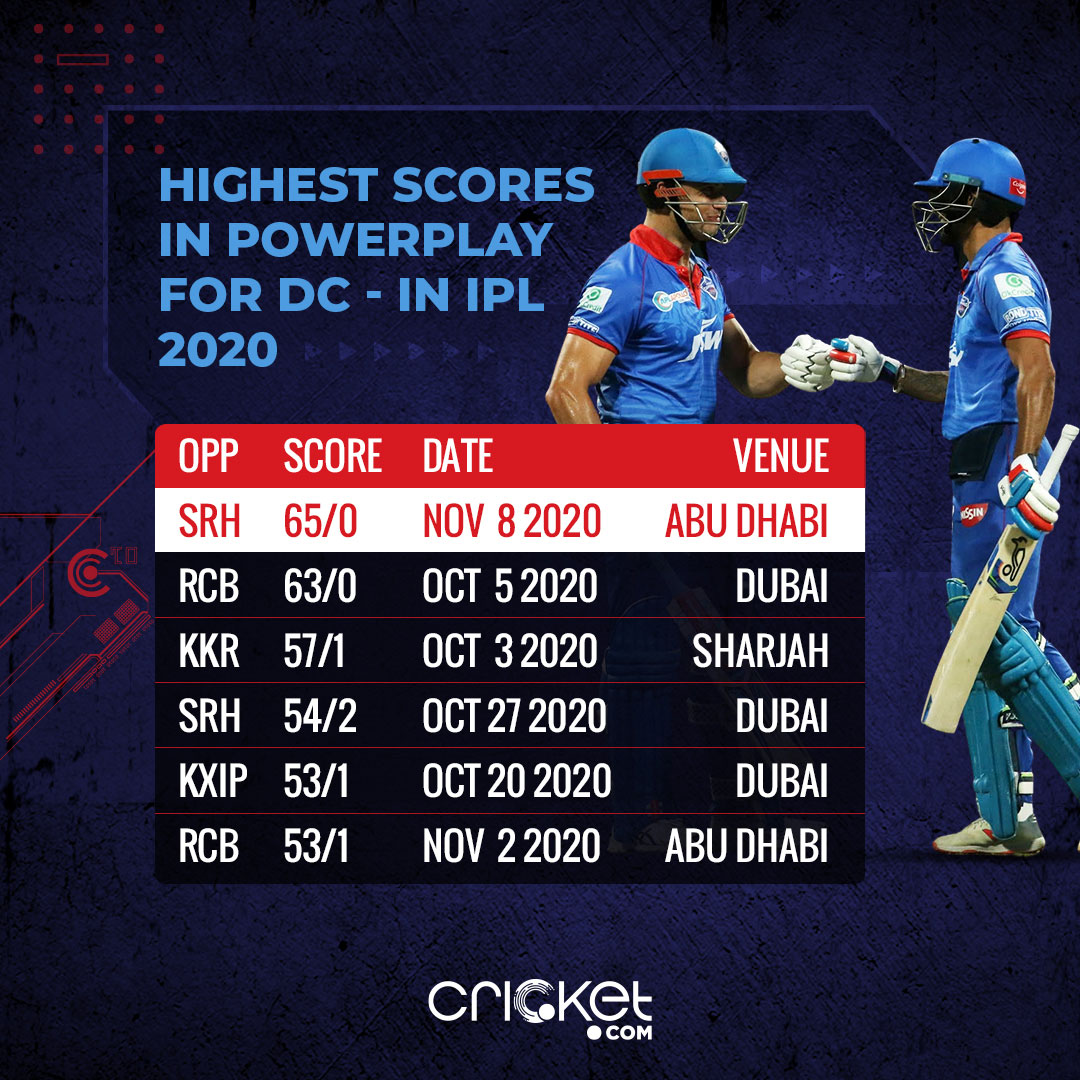 Most runs in a season of IPL

By virtue of his half-century against SRH, Dhawan breached the 600-run mark for the first time in an IPL season. Previously, his best came when he was playing for the now-defunct Deccan Chargers in 2012. He had posted 569 runs that season at an average of 40.6. On another note, Dhawan became the second DC batsman to score 600+ runs in a season of IPL. Rishabh Pant in 2018 had scored 684 runs, which is the best by a batsman for the Delhi based franchise in a season of IPL. 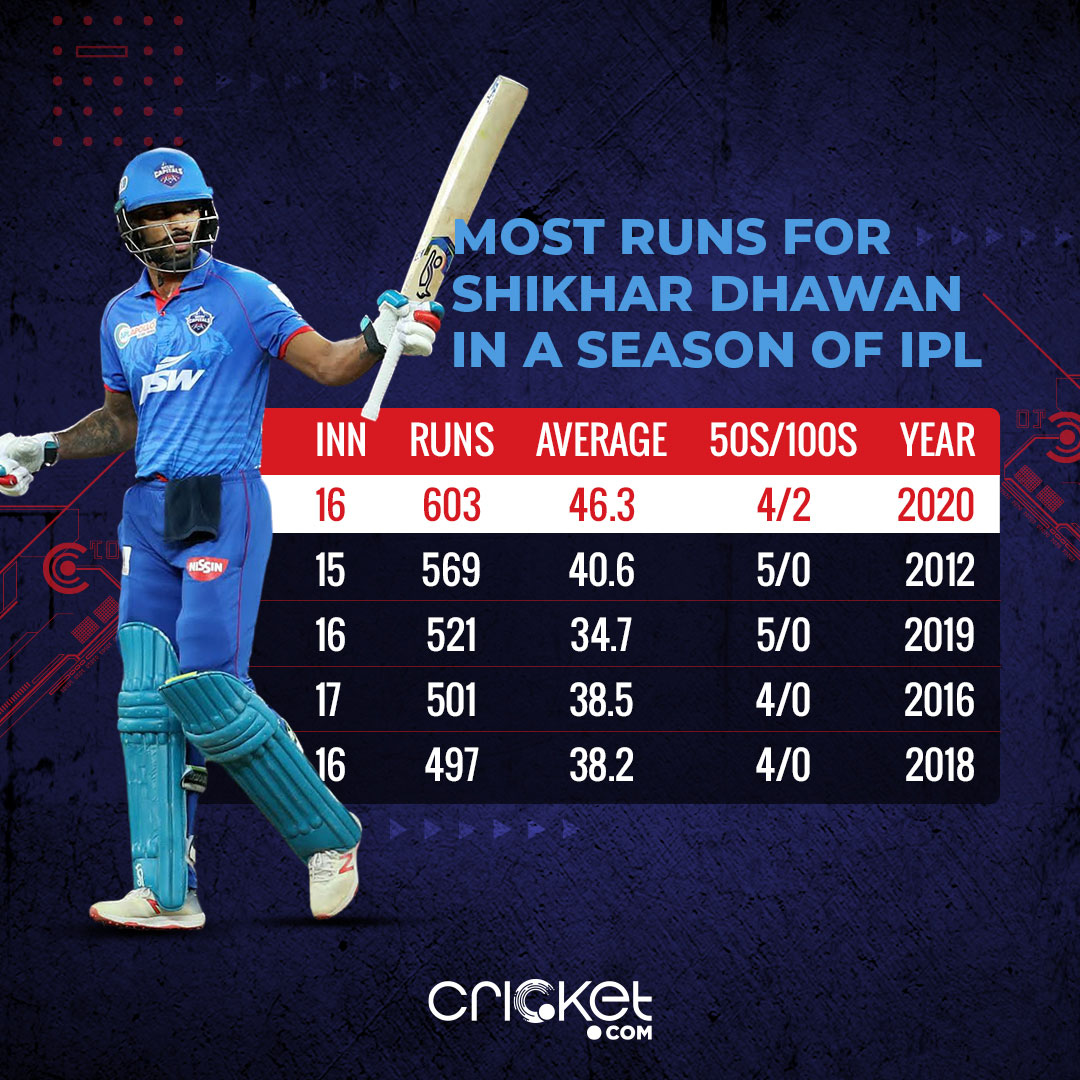 Apart from his first half-century against Mumbai Indians off 39 balls, Dhawan has been quick in the rest of his half-centuries. He has had six 50+ scores this season and three of them have come within the 30-ball range. Today (8th November), against SRH, Dhawan registered a 26-ball half-century, which is the quickest for him this season. Overall in IPL, this was his second quickest half-century. His fastest, a ball less than today’s, came against Rajasthan Royals last year in Jaipur. 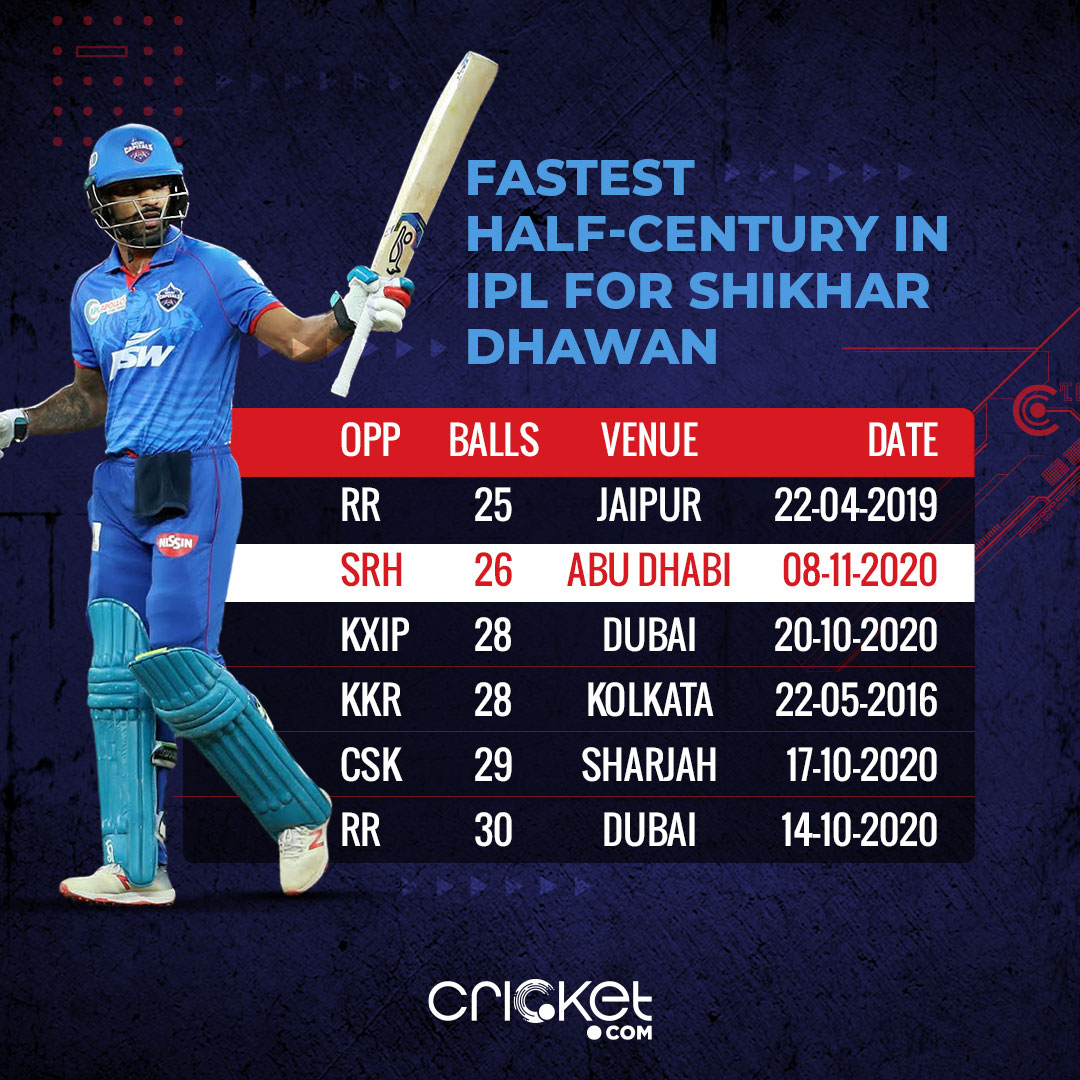 Second-most wickets by a bowler in a season of IPL

Kagiso Rabada has certainly been the gem DC were looking for. In the previous edition, Rabada had bagged 25 wickets. On the back of his heroics with the ball, DC had made it to the playoffs after six years. This season, he continued from where he left. In fact, it has been fine-tuned better than the last edition. His 29 wickets this season has been one of the reasons why DC have made it to their maiden IPL final. Rabada’s 29 wickets in IPL 2020, is the best for a DC bowler in a season and the second-most overall. Dwayne Bravo in 2013 had bagged 32 wickets for Chennai Super Kings, which is still the record. Rabada needs a four-wicket haul to break that record or a three-wicket haul to level the record in the final. 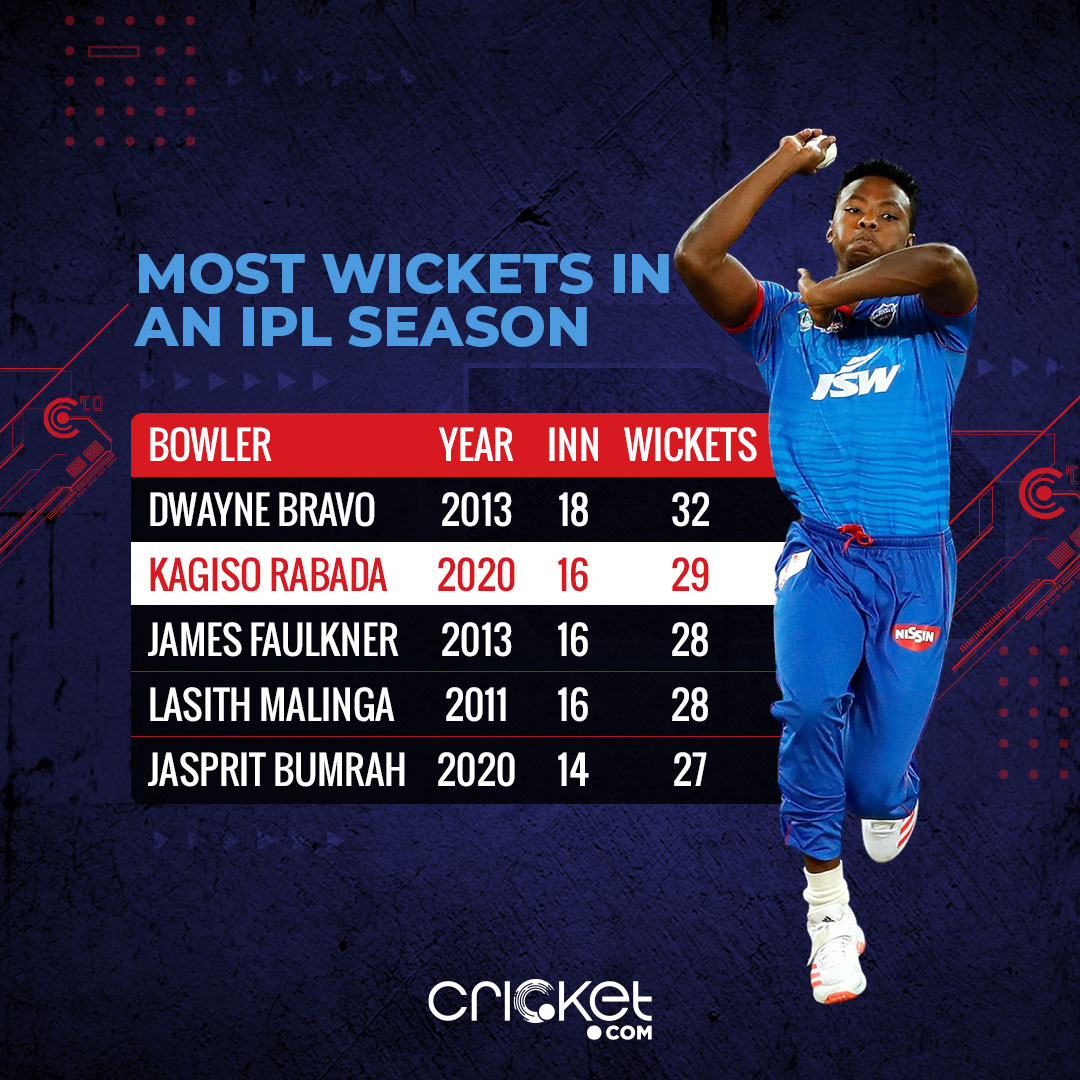 Losing more than two wickets for the first time this season

Generally, SRH had been one of the best batting teams during the first six overs in IPL 2020. Prior to their match against DC, they had lost only 12 wickets in the Powerplay, which was the least. Six times out of the 15 matches they played, their openers were unseparated in the Powerplay. However, in a crucial match, their top order collapsed inside the first six overs. This was the first instance of SRH losing three wickets inside the Powerplay. Probably, this was one of the reasons they fell short of the target.

After a long wait of 13 years, DC finally made it to the finale of an IPL edition. Among the current eight teams, DC were the only team that hadn’t featured in an IPL final. In the inaugural edition of IPL in 2008, DC had made it to the top four, but failed to win against RR in the semi-final. In 2009, DC were at the summit by the end of the league stage. However, they failed once again in the semi-final. Yet again, in the 2012 edition of IPL, they had topped the table, but lost in both qualifiers. Then there was a drought as they failed to make it to the playoffs for six consecutive years. In 2019, they won the eliminator against SRH, but lost Qualifier two against CSK. This season, they have gone all the way up.

Best economy by a bowler in a season of IPL

Although SRH have crashed out of the 2020 edition of IPL, their bowlers as usual have been exceptional. However, this Afghan leggie always stands out as the best in any T20 league. Usually, with technology around, any variation by a bowler is cracked by a batsman within months. Still unable to decode Rashid, batsmen take the safer route of playing out his overs. This is one of the reasons why Rashid is one amongst the best economical bowlers. In IPL 2020, he has bagged 21 wickets at an economy of 5.4. Amongst bowlers who have had 20+ wickets in a season of IPL, his economy of 5.4 is the best. 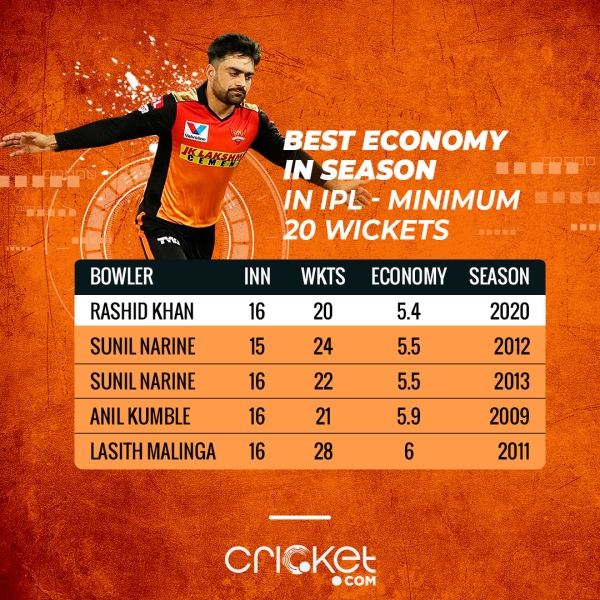