Shimron Hetmyer: Embracing a complex role in an effortless manner 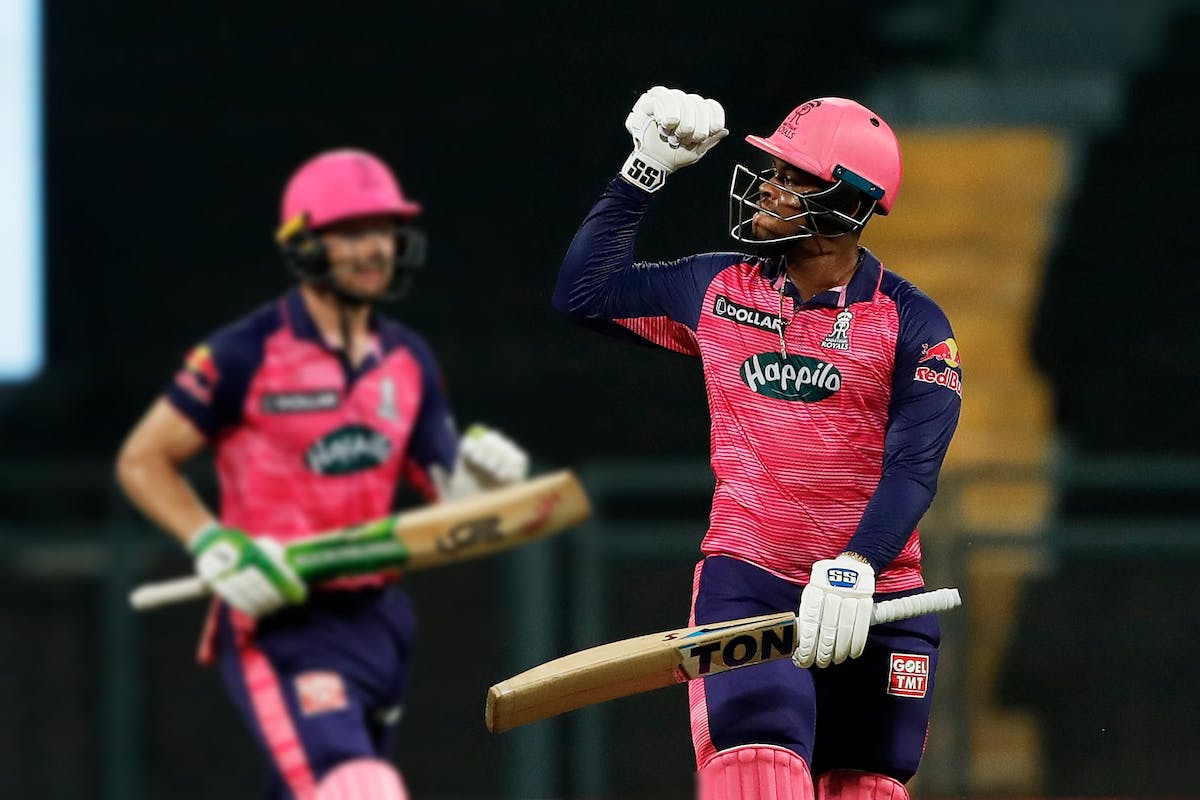 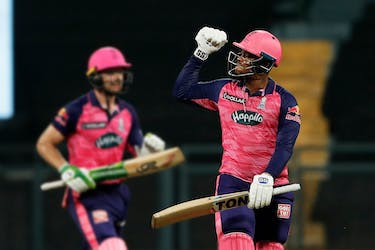 Shimron Hetmyer: Embracing a complex role in an effortless manner

While moving down the order is tricky for any top-order batter, the left-hander has mastered the art of finishing the innings

Moving lower down the order isn’t easy in white-ball cricket. It is further tricky in T20s. Especially for a batter who has played in the top-order for the most part of his career. However, Shimron Hetmyer has taken to the role like a duck to water.

Since his debut in 2016 until the start of the 2021 IPL season, Hetmyer batted 50 out of his 75 T20 innings at number 3 and three more as an opener. That constitutes nearly 71 percent of his innings in the top order. Only 16 of these innings came at number five and six, where the left-hander averaged 11.5.

The stats justify that Hetmyer grew up as a top-order batter. Although, he is only 25 and cricket demands continuous evolution, there is a scarcity of success stories when a batter has been pushed down in the batting order.

At Delhi Capitals in IPL 2021, the top-order role was not available for Hetmyer.

The role was available but with Marcus Stoinis not at his best, both on form and fitness terms, the team dynamics required Hetmyer to bat at five instead of his innate spot at three. He not only performed but may well have exceeded expectations, averaging 34.6 at a strike-rate of 168.1 in the season.

In IPL since 2021, Hetmyer has only batted at five or lower. His average entry point to the wicket has been the 15th over. The left-hander has responded to the litmus test by scoring more runs than any other batter in overs 16-20 in these two seasons. In terms of strike-rate, he is only behind the maverick AB de Villiers. 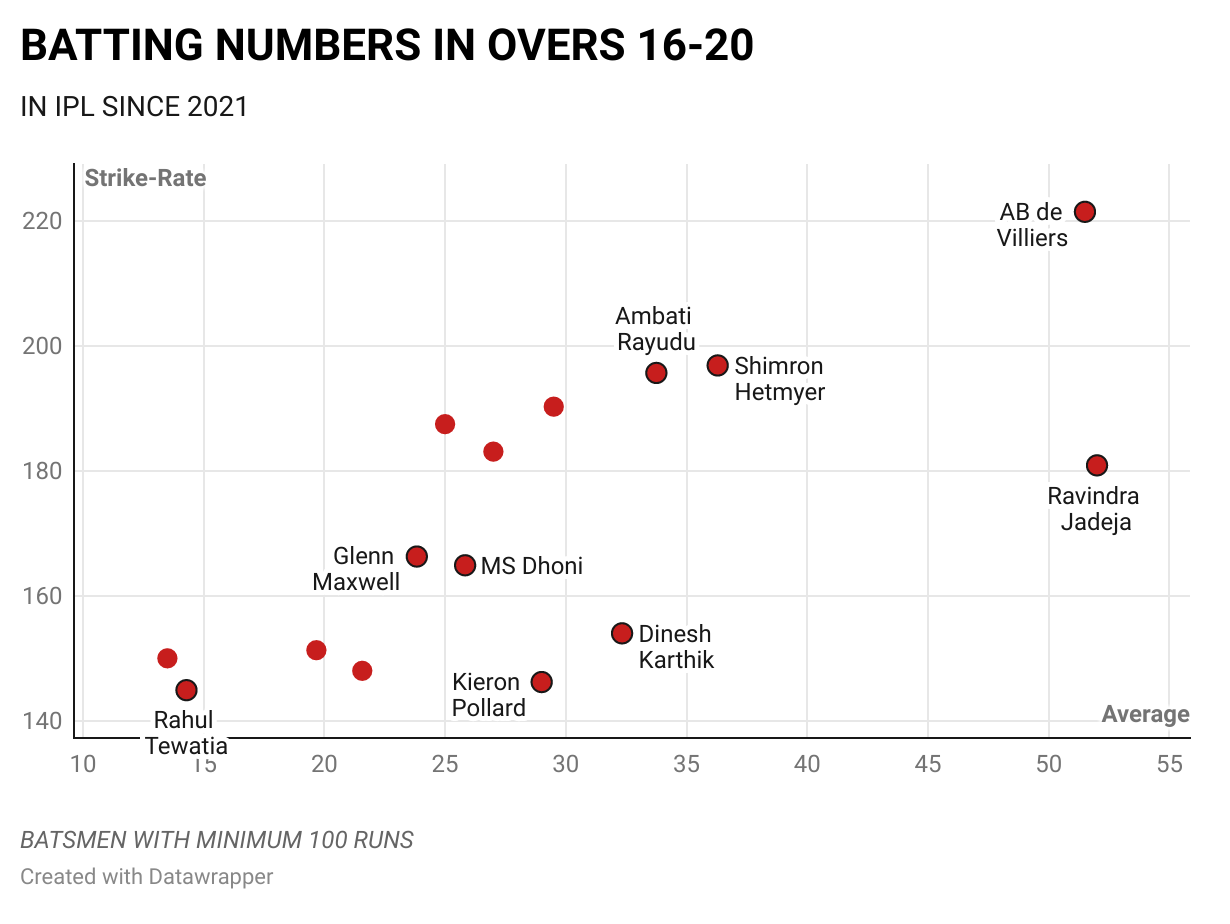 These are astonishing numbers for a top-order batter sacrificing the leverage of getting his eye in.

But the way Hetmyer has scored these runs indicates that he always had the game for such complex roles. His strong core helps him to generate strength despite staying low. This enables him to tackle the weaponries of the modern-day death bowlers such as the low full tosses.

Unlike other batters, he can hit them down the ground instilling enough power in his shots to clear the ropes. In the case of wide-yorkers that are harder to hit, Hetmyer opens up the point region to gain the maximum output. His supreme ability to find gaps, an attribute to his finesse as a top-order batter, helps him further.

Add to that the experience of facing Dwayne Bravo in the nets who is one of the most renowned death bowlers in T20 history. In Match 50 of IPL 2021, Hetmyer challenged Bravo’s wide full ball theory to close out a successful run chase.

The wagon wheel below reveals Hetmyer’s scoring options. His distribution of boundaries is well spread with a strike-rate in excess of 150 in each of the orthodox scoring regions. 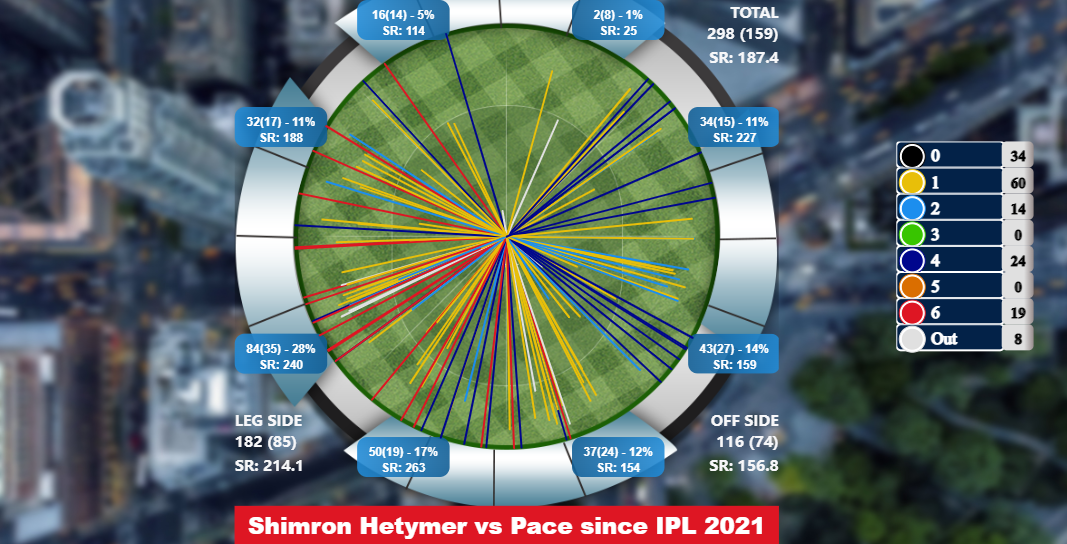 The same graph for other top middle-order batters clears the story. Rishabh Pant’s strike-rate against pace in the cover, long-off and long-on region is underwhelming - 124, 95, 127 respectively. Ravindra Jadeja’s strike-rate in the point region is 112 and in the long-off it dips to 100. Kieron Pollard has no boundaries in the point region in the considered time frame. The comparison is not to mortify anyone but to clarify what ticks Hetmyer in his new role.

Consequently, there is no length that has troubled him. Except the perfectly executed yorkers, he has a healthy strike rate in each zone. 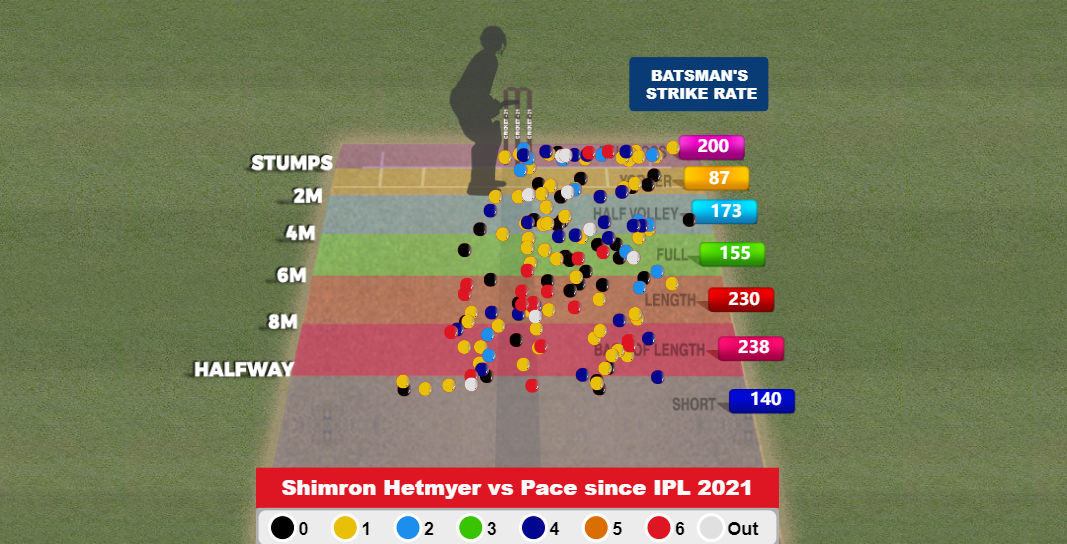 The last three of these knocks have come for Rajasthan Royals where he is used in the same fashion. Walking in at 148/3 in the 15th over in Match 5, he ensured the team goes past the 200-run mark. Against Mumbai, in a similar situation, his 35 off 14 was the point of difference.

In Match 13, he had a different situation to counter. His arrival in the 12th over had put Rajasthan’s shallow batting depth at risk. Hetmyer didn’t score off his first eight balls but once the onslaught began, he finished with 42 off 31 balls. The last ball six was another example of his flawless technique for the death overs. Going across the stumps, Hetmyer slammed a length delivery over the deep square leg with one knee on the ground. 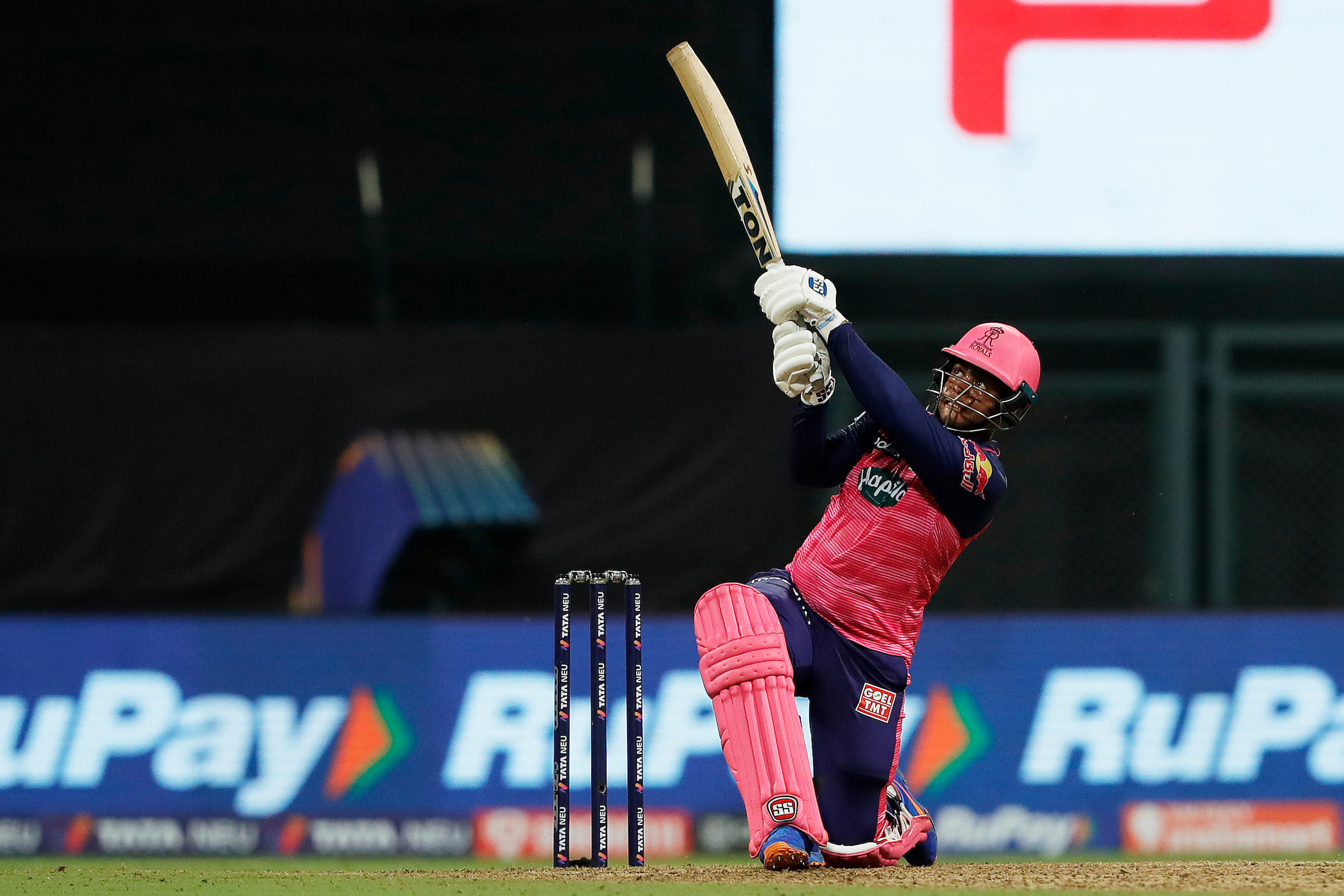 The aforementioned points are accentuated by his imperious form. In such circumstances, it's bewildering that West Indies have dropped him on grounds of fitness. The question arises if they are missing out on an impeccable batting resource for a trivial reason. After all, he was their highest run-scorer in the T20 World Cup last year, including a valiant 81 not out against Sri Lanka.

Considering that West Indies’ T20 fortunes are at an all-time low, it is safe to assume that the Caribbean selectors are eating humble pie for breakfast watching the Rajasthan Royals play (mind the time zone difference). Hetmyer’s consistent contributions may slip under the radar but they are too valuable in the T20 format.