For some time now it has been a battle to avoid the Indian Premier League wooden spoon for Royal Challengers Bangalore and Rajasthan Royals.

A wealth of talent on both sides has been wasted by some lacklustre decision-making and glaring inconsistency.

Being firmly rooted to the bottom of the table, RCB have had little to cheer all season and will look to put on a show for their fans when Rajasthan come knocking at the M Chinnaswamy Stadium on Tuesday.

It has been a happy hunting ground for Rajasthan, who have trumped the home side in four out of the seven clashes at the venue. Coupled with that, RCB have ended up on the losing side for three games on the trot against RR.

One of the few standouts in an otherwise miserable season for Virat Kohli’s men has been the form of Parthiv Patel at the top of the innings. In a side that consists batting superstars Kohli and AB de Villiers, the diminutive wicket-keeper has been striking the ball well, boasting a strike-rate of 147.70 in the Powerplay.

The last time these two sides met at the Chinnaswamy, Sanju Samson played a blinder of an innings with Royals notching a 19-run victory. Another standout performance in that game was local lad Shreyas Gopal, who managed to scalp both the big guns – Kohli and AB.

Gopal was prolific once again in the last outing between these two sides bagging Kohli and AB once again, while adding Shimron Hetmyer to his kitty. The leg-spinner has a tally of nine wickets against RCB at an average of 5.55 and an economy rate of just 4.16.

The men from the Pink City will look for an encore as they attempt to keep their last-four hopes alive.

After relinquishing the captaincy to Steve Smith four games ago, Ajinkya Rahane has played with a sense of freedom and given the Royals solid starts. But the opener has struggled against leg spin striking at 113.33 with a boundary percentage of 11.11. Yuzvendra Chahal has troubled Rahane in the past and will hope to do the same come Tuesday.

There have been troubles aplenty at RCB especially with the bowling unit that has gone for plenty especially at the death. Their economy of 11.15 between over 16-20 is the highest in the league so far this season, something that could stem from the fact that they haven’t been able to nail Yorkers with precision. 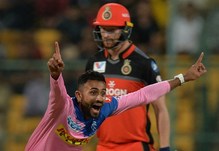