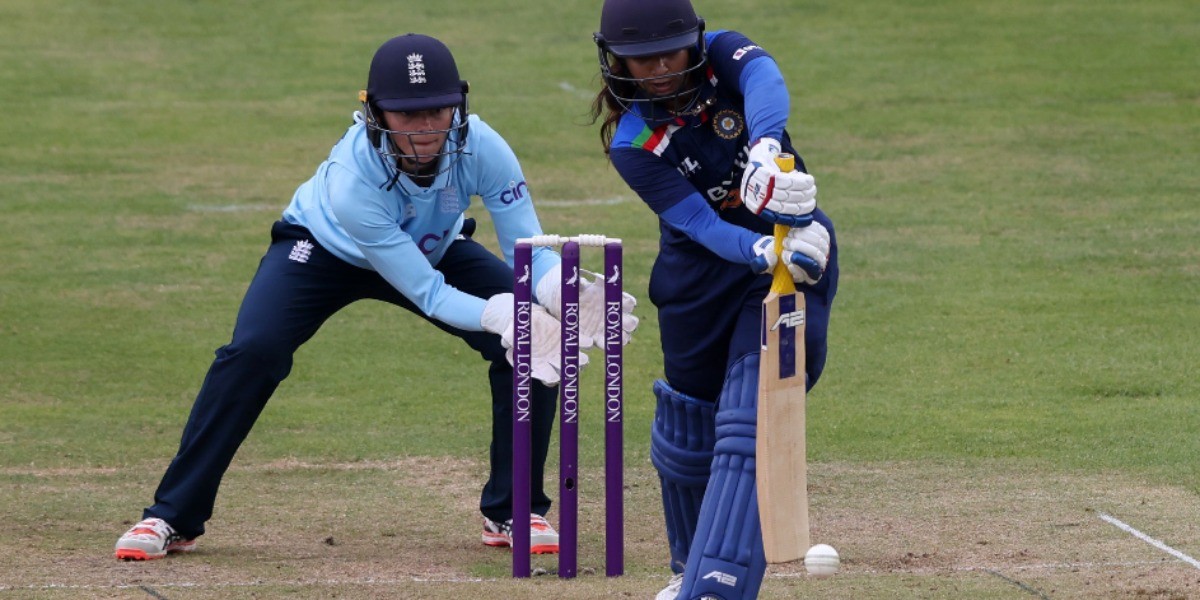 Mithali Raj and Co. have clearly struggled while batting first in ODIs and it's largely because of their overcautious approach

Mithali Raj and Co. played 181 dot balls in the first One-Day International against England in Bristol. That's more than 30 overs, and as a result, India could only manage a paltry total of 201/8 in their 50 overs. England batters Tammy Beaumont and Nat Sciver then smashed them all around the park and got the job done with more than 15 overs to spare. This game was a perfect example of what's wrong with India's brand of cricket. It's outdated!

India have made huge improvements in the last few years but are still way behind the likes of Australia, England, and New Zealand. Since 2019, the Women in Blue have the fourth-worst scoring rate (4.2) amongst the top nine teams in ODIs and have the highest dot ball percentage (61.9%). They do score a boundary in every 13.4 deliveries but end up playing way too many dot balls. "Clearly, yes, we need to look into that aspect and work on rotating the strike," said Raj after India lost the first of the three ODIs by eight wickets.

THINGS GET WORSE WHILE BATTING FIRST

India have won 10 of their 18 ODIs since 2019 but most of their wins have come while batting second. They have won seven of the eight games in which they have batted second and only three of the remaining 10 in which they had to set a target. In those 10 encounters, only once they have managed to breach the 250-run mark. Meanwhile, Australia (seven times in 10 innings), England (five times in 10 innings) and South Africa (three times in 10 innings) have all fared better than India in this time frame. India have the third-best batting average (25) and second-best balls/wicket ratio (37.1) but that's only because most of their batters don't take enough risks. 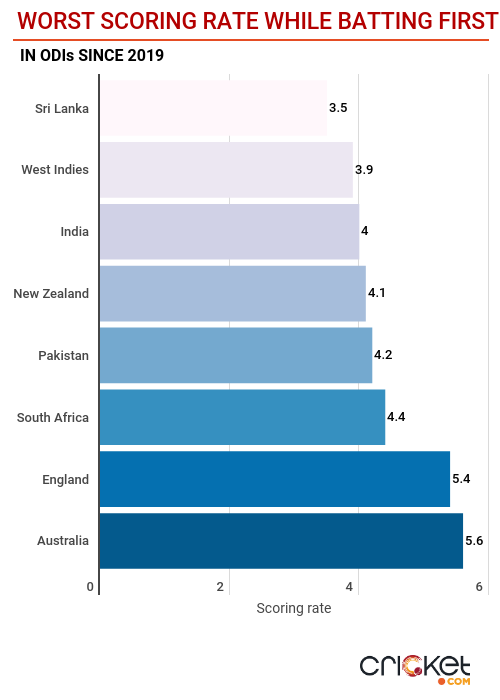 Since the 2017 ODI World Cup, India's average first-innings total has been just 213, which is the fifth-best amongst the top nine ODI teams. The likes of South Africa (227) and New Zealand (221) have done slightly better, but India will have to put in a lot more effort if they want to compete with England (259) and Australia (289). While batting first, Australia have won all of their 10 encounters since 2019 and have the best scoring rate, average (41.3) and balls/boundary ratio (9.9). The Indian batters have struggled to score at a good pace in all three phases of the innings. Since 2019, they have scored runs at just 2.8 in the powerplay. 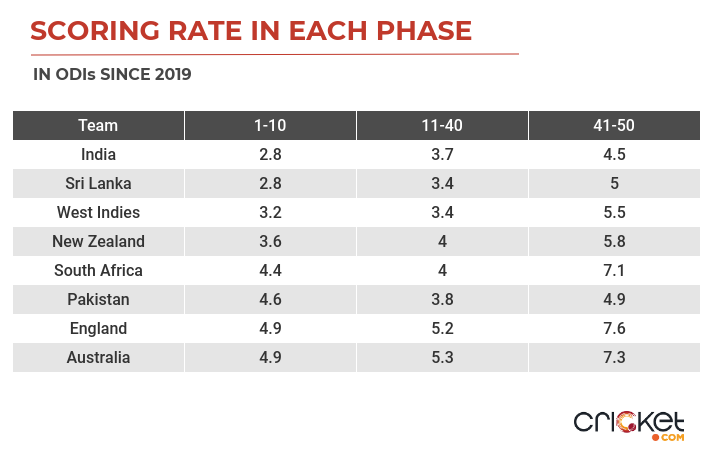 Harmanpreet Kaur (76.4) and Smriti Mandhana (69.7) are India's two most attacking batters but both of them have a strike rate of below 80 while batting first in ODIs since 2019. In fact, amongst batters who have played at least two innings, not a single Indian batter has a strike rate of more than 80. Mandhana (106.2) and Harmanpreet (91.7) have way better numbers in the second innings but haven't been able to replicate the same while setting a target. Then you have players like Ashleigh Gardner (124), Danielle Wyatt (109.3), Alyssa Healy (101.8) and Natalie Sciver (96.7) and that tells you why Australia and England are so superior. 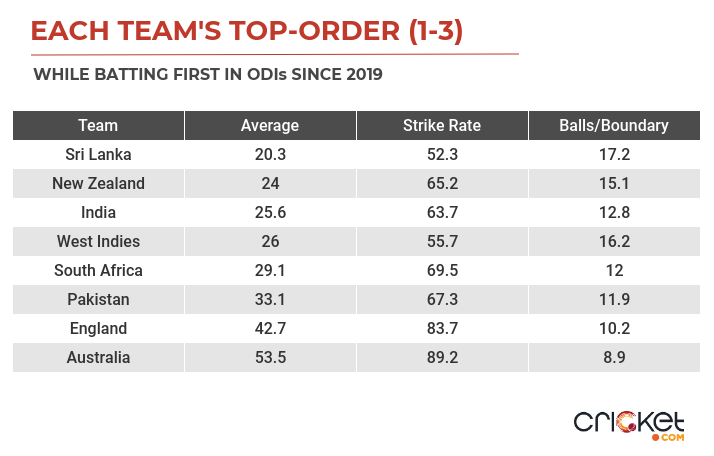 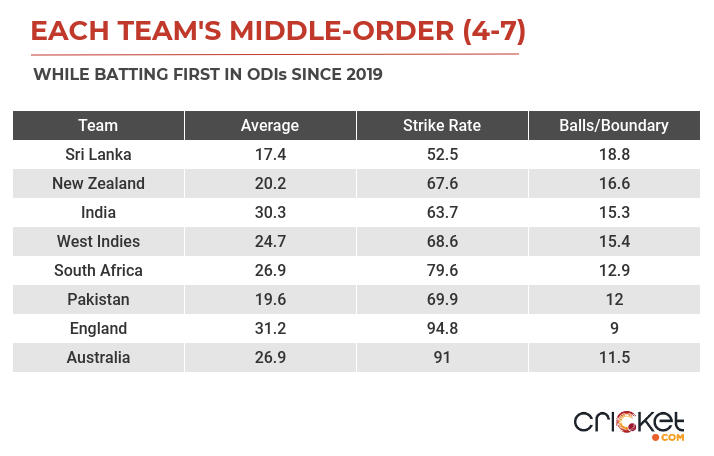 The above two tables clearly reflect what's wrong with India's batting. Raj spoke about how the top-order needs to get those big runs and set a platform for the middle-order, and she wasn't wrong. India's top-order has the third-worst batting average and strike rate in the first innings and that puts a lot of pressure on the middle-order. There are two routes that could be explored. You either go all guns blazing in the powerplay or preserve wickets for the second half of the innings and Mandhana and Co. have done neither.

Amongst batters who have scored at least 150 runs in the first innings since 2019, Deepti Sharma, Raj, and Punam Raut have the worst strike rate. The three of them were India's top-scorers in the first ODI against England but failed to put any pressure on the bowling attack. The three scored 134 of the 201 runs India managed at the County Ground but it took them 215 deliveries to get those runs. Raj has now started batting at No. 4, allowing Raut to take the No. 3 spot. The two have surely scored enough runs but have also ended up wasting too many deliveries. In short, India can't afford to have both Raut and Raj in the playing XI. 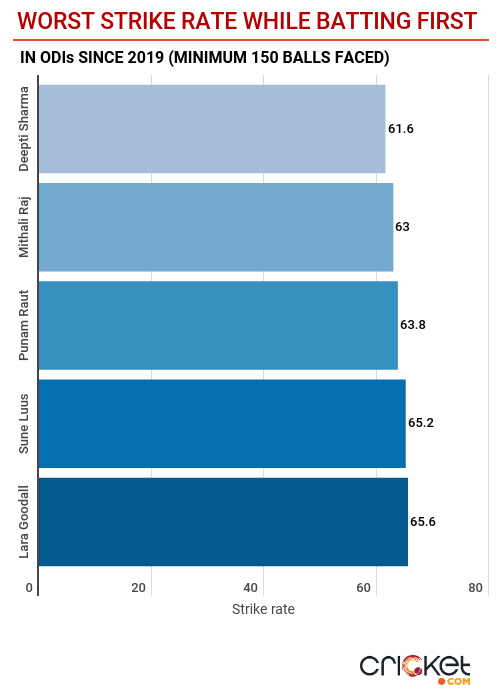 "We can't really fill (the line-up) with allrounders who sort of pitch in bowling or in batting. We need to have batters in the side who'll score runs. If I go at No. 4, I'm also giving an opportunity for the team because I know for a fact that I'm not going to play forever. I also need to groom players in a sense when I am around, and guide them in the middle," said Raj.

WHAT COULD BE DONE?

Shafali Verma made her much-awaited ODI debut in the first encounter but couldn't have the same impact she did in her Test debut earlier this month. However, the swashbuckling opener surely displayed a lot more intent than other batters, scoring 15 off 14 deliveries. Pooja Vastrakar (17-ball 15) was the other batter who looked good and the presence of these two in the top-seven would surely help India in this department. Meanwhile, Mandhana and Harmanpreet will have to find a way to make an impact while batting first just like they always do while batting second.

Jemimah Rodrigues and Indrani Roy (yet to make her international debut) are the two batters who are more free-flowing than Raut. The latter has a strike rate of 58.26 in ODIs, while Rodrigues operates at 71.13. Meanwhile, Jharkhand's wicketkeeper-batter Roy was a leading run-scorer in the Senior One-Day Trophy in 2020-21, smashing 456 runs in eight innings at an average of 76 and a strike rate of 86.52. The 2022 World Cup is hardly eight months away and India will have to get their act together as soon as possible if they want to go toe-to-toe with the likes of Australia and England.