SMAT 2021: How the quarterfinals panned out 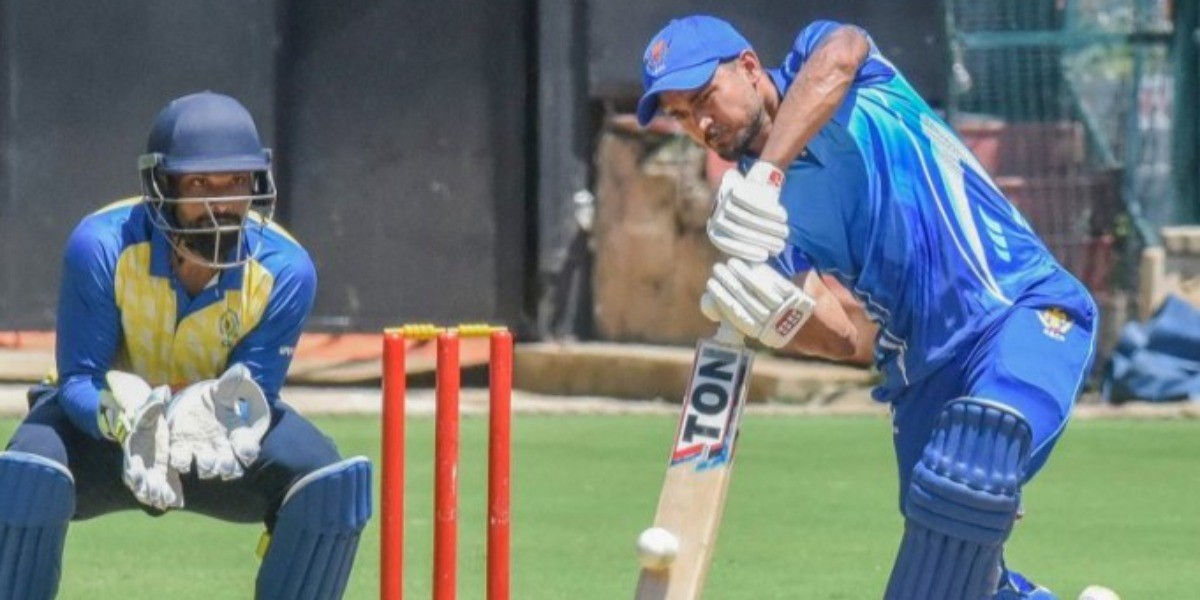 SMAT 2021: How the quarterfinals panned out

The semi-finalists of the 2021 Syed Mushtaq Ali Trophy have been decided and it is Tamil Nadu, Hyderabad, Karnataka and Vidarbha who are the four teams who will be fighting it out over the next three days for the championship.

From dominant wins to last over encounters and a Super Over, it was an exhilarating day of cricketing action at the Syed Mushtaq Ali Trophy on Thursday.

The quarterfinals witnessed plenty of spirited performances and fightbacks from the teams in fray. We take you through a summary of the four quarterfinals that were played today.

Tamil Nadu completed a spectacular run-chase to win a thriller against Kerala which went down till the very last over. Earlier in the day, TN skipper Vijay Shankar elected to bowl first after winning the toss.

The Kerala openers were off to a good start without losing any wicket in the powerplay overs. Murugan Ashwin got the first breakthrough to dismiss Mohammed Azharuddeen. His opening partner Rohan Kunnummal went on to score a half-century.

Sanjay Yadav then wreaked havoc with his twin strikes to dismiss Kunnummal and the in-form Sanju Samson in a space of three balls. He continued to bowl tightly and conceded just 23 runs in his four-over spell. Kerala were 119/3 after 17 overs with Vishnu Vinod and Sachin Baby at the crease.

This is exactly where Vishnu went bonkers with the bat. He hit Sandeep Warrier for 16 runs in the first three deliveries of the 18th over before the latter walked off the field due to injury. The right-handed batter continued his onslaught with four more sixes to complete his half-century from just 22 balls.

Kerala ended up scoring 62 runs from the last three overs which included seven sixes, all coming from the bat of Vishnu Vinod. His knock of 65* (26) took Kerala's total to 181/4 at the end of 20 overs.

On the other hand, Tamil Nadu who got off to a quick start, lost N Jagadeesan early. Hari Nishanth scored 31 (22) before being bowled by Unnikrishnan Manukrishnan right after the powerplay. Once the left-arm pacer was off the attack, Sai Sudharsan got into the act, scoring 46 (31), adding 57 runs for the third wicket.

Important contributions kept coming in for Tamil Nadu with Vijay Shankar and Sanjay Yadav reaching the thirties. It was only when Manukrishnan was brought back into the attack that Kerala smelled a chance. Shankar was dismissed and the equation was down to 32 runs from the last three overs.

However, Shahrukh Khan's back-to-back sixes in the very next over sealed the deal for Tamil Nadu. Manukrishnan came back in the penultimate over to take the wicket of Sanjay Yadav but the damage was done. M Mohammed hit a six off his very first ball he faced to take Tamil Nadu to the semifinal.

Vidarbha dished out a well disciplined bowling performance to skittle the Rajasthan team for a low total of 84/8. They not only cruised to victory by nine wickets but also with more than five overs to spare.

Put to bat first, both Rajasthan openers were dismissed inside the first two overs. Speedster Darshan Nalkande then got the better of rival skipper Mahipal Lomror to reduce them to 16/3.

The Vidarbha pacers continued to capitalise in the powerplay overs. Yash Thakur picked two wickets in an over to send man-in-form Deepak Hooda and Salman Khan back to the hut. Rajasthan lost half their side with just 18 runs on the board.

A rescue act from Kamlesh Nagarkoti who batted for 48 deliveries to score 39 runs allowed Rajasthan to bat the entire 20 overs. They managed to crawl their way through a small total of 84/8 which was never going to be enough.

All Vidarbha bowlers got amongst the wickets with Yash leading the way by getting two scalps while fellow pacers, Nalkande and Lalit picked a wicket each. The spin trio comprising Akshay Karnewar, Akshay Wakhare and Atharva Taide also got a wicket a piece.

Chasing a modest 83, the openers laid a solid foundation with a 63-run partnership for the first wicket. While Ganesh Satish got out scoring 33, Atharva Taide stayed unbeaten on 40* to help his side register a comfortable nine-wicket win. Left-arm pacer Aniket Choudhary picked the lone wicket for Rajasthan.

Bengal and Karnataka got into an enthralling encounter that ended in a tie. After opting to bowl first, Bengal bowlers did a splendid job to restrict the run-scoring in the powerplay overs. Karantaka were 28/1 after six overs with Akash Deep dismissing Sharath cheaply. The bowlers continued to keep it tight as both Rohan Kadam and Manish Pandey scored a combined 59 runs from 63 balls before getting out.

The game-changer for Karnataka turned out to be Karun Nair who scored a quickfire half-century with three sixes and four boundaries. Abhinav Manohar and Aniruddha Joshi played important cameos with 30 runs coming from the final two overs. Karnataka managed to post a total of 160/5

Shreevats Goswami got Bengal off to a flier with 20 runs from the very first over. However, a couple of wickets in the next two overs brought Karnataka right back into the game. Skipper Sudip Chatterjee also couldn't do enough as Bengal were 52/3 at the end of powerplay.

With 53 runs required from 31 deliveries, Ritwik Choudhary took charge and brought the equation down to 20 runs from the last over. He then started off with consecutive maximums before taking a single. A boundary and a couple from Akash Deep narrowed it down to one run from the final ball. However, Manish Pandey's direct throw to the bowler's end took the game to a Super Over.

With Karnataka bowling first in the Super Over, leg-spinner KC Cariappa started with a dot followed by a wicket. Shreevats Goswami walked-in to face the third delivery and hit a boundary, but on the next ball, he was dismissed run-out for a second time in the game.

With only six runs required to win, skipper Manish Pandey took a couple before smashing a six to lead Karnataka to victory. While he played a slow knock of 29 (34) with the bat initially, it was his run-out that took this game to the next stage. Fittingly, Pandey finished the game off.

Winning the toss and opting to bowl first, Gujarat struck early to get the wicket of opener Pragnay Reddy. Tilak Varma, who came in at number three, immediately got going and scored a fabulous knock of 75 (50). He batted throug the innings and was run-out on the final ball.

There were also crucial contributions from skipper Tanmay Agarwal who scored 31 (21) and a quickfire cameo by Rahul Buddhi with an unbeaten 25* (16). Hyderabad managed to post a total of 158/5 on board. Piyush Chawla was splendid with the ball conceding just nine runs and picking two wickets. Right-arm pacer Chintan Gaja also got a couple of wickets.

As for Gujarat, they were put under pressure early with their score reading 8/2 and further 33/3. Het Patel and Piyush Chawla tried to extend their stay at the crease but got out in the 20s. The Hyderabad bowlers kept picking wickets at regular intervals and were also quite economical.

Ripal Patel tried to fight a lone battle with 35 (24) but the target went out of Gujarat's reach. They could only manage 128/8, falling short by 30 runs. A fantastic bowling show led by Ravi Teja's 3/27 and Chama V Milind's 2/28 took Hyderabad to the semis.