Smith will always be remembered as a cheat: Harmison

Smith will always be remembered as a cheat: Harmison

Harmison was part of England's Ashes-winning squad in 2005

Smith has been England’s tormentor-in-chief in the ongoing Ashes series, which Australia have already retained after winning the fourth Test in Manchester on Sunday.

Smith is having a fairytale Ashes series, already accumulating 671 runs, including a double century at a staggering average of 134.20.

But that didn’t stop Harmison from taking a dig at the former Australia skipper, who said Smith can never be forgiven for his ball-tampering act.

“I don’t think you can forgive him,” Harmison was quoted as saying by London-based sports radio station ‘talkSPORT’.

“When you’re known as a cheat - and he is, I’m not going to sugar-coat it, the three guys cheated - that’s on your CV. You’re marked and you take it to your grave. Whatever Steve Smith does, he’ll always be remembered for what happened in South Africa,” he added.

Harmison, who represented England in 63 Tests including all five games during the epic 2005 Ashes series, said Smith and his partners-in-crime David Warner and Cameron Bancroft will have to live with the “cheat” tag all their lives.

“I can’t see anybody’s opinion changing on Smith, Bancroft, or Warner. Because of what they’ve done, they’ve tarnished the game,” he said.

NEWS
Smith best player I've ever seen: Paine
Australia's No. 4 scored 211 and 82 in the Old Trafford Test that saw his team retain The Ashes

NEWS
Like to get in into tricky situations and take the team through: Smith
The former Australian captain scored a counter-attacking 82 to dig Australia out of a spot of bother in the second innings 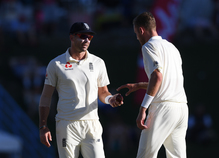