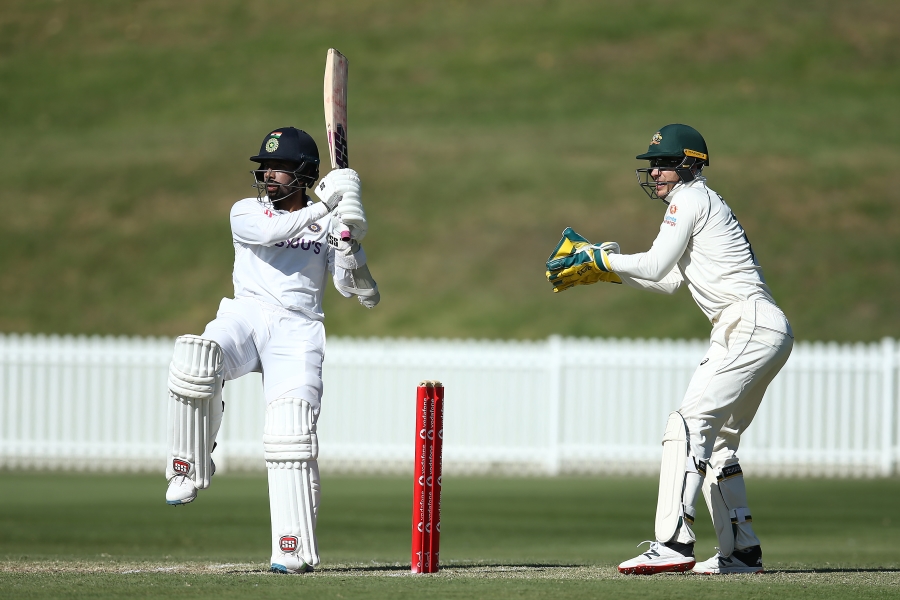 Medium pacer Mark Steketee, who returned impressive figures of 5/37, came in the way of what could have been a few sessions of good batting practice on the third and final day for the touring Indians

In the form of a sedate half-century, Wriddhiman Saha got himself some invaluable batting practice ahead of the first Test against Australia, but his other famed Indian colleagues failed to bat long as their warm-up game against Australia A concluded in a draw on Tuesday (8 December 2020).

Medium pacer Mark Steketee, who returned impressive figures of 5/37, came in the way of what could have been a few sessions of good batting practice on the third and final day for the touring Indians.

Making up for his first-innings nought, Saha top-scored for the visitors with 54 after facing 100 deliveries at the Drummoyne Oval on the third and final day of the tune-up.

Bracing for the first Test, the seasoned Saha found the fence seven times during his stay in the middle.

Beginning with a deficit of 59 runs, the Indians declared their second innings at 189 for nine and in reply, the Australians, needing 130 in 15 overs to register an outright victory, reached 52 for one when the stumps were drawn for one last time in the game.

India vice-captain Ajinkya Rahane, who is going to lead the team in the absence of Virat Kohli after the first Test, followed up his neat first-innings century with a knock of 28.

Cheteshwar Pujara, who made a solid half-century in preparation for the marquee series opener, however, failed to open his account in the second essay.

The young opening duo of Prithvi Shah (19) and Shubman Gill (29) added 37 runs for the first wicket before Cameron Green sent the former back.

Pujara did not last long and was bowled by Michael Neser, which brought to the crease Hanuma Vihari.

Vihari made 28 before Neser had him caught by Burns.

For the home team, Green enjoyed a fine all-round outing having scored a hundred in the first innings which ended at 306 for nine declared.

After his impressive performance in the first innings, during which he picked up three wickets, pacer Umesh Yadav added another scalp to his name when the Australians went out to bat again.

Australia were overnight 286 for eight with Green batting on 114.

In the first session of the final day, Green added another 15 runs before the hosts declared their first innings.

The Indians started on a promising note but soon started losing wickets at regular intervals, with Stekette doing the bulk of the damage.

The Test series starts with the Day-Night game in Adelaide from December 17-21.

REPORT - DAY 2
1st Warm-Up: Umesh, Ashwin make their case, Green ton takes Aus A to 286/8
Australia now have a 39-run lead after India A declared their innings at 247 for 9 in the first hour of the second day, with skipper Ajinkya Rahane remaining unbeaten on 117

NEWS
Rahane scores unbeaten century in drawn game against New Zealand A
In response to New Zealand A's 386 for nine, India A reached 467 for five in 109.3 overs when the game ended in a draw

NEWS
Rahane, Vihari hit half centuries in drawn game
Rahane, who has not scored a hundred in more than two years, made 54 off 162 balls