South Africa, England scheduled to face off as tour hangs in the balance 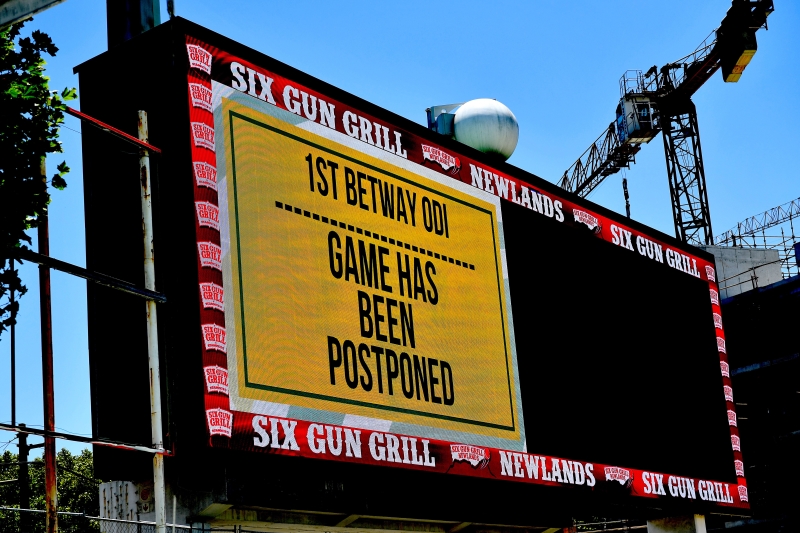 South Africa, England scheduled to face off as tour hangs in the balance

After there were two unconfirmed positive COVID tests in the England touring party, the Paarl ODI was called off on Sunday

The One-Day International (ODI) series between South Africa and England was first slated to begin on Friday (4 December 2020). A positive COVID test in the South African squad, though, saw a rearranged schedule. The series was supposed to then begin on Sunday (6 December 2020), but that match couldn’t go ahead as well after two members of the England touring party returned unconfirmed positive tests.

On Monday (7 December 2020), the two teams are currently scheduled to face off at Newlands, Cape Town. The situation is still pretty unclear, with the players presently self-isolating in their rooms. The environment that both teams have found themselves in over the last couple of days has been unfortunate and while it’s far from ideal preparation for an international match, they will have bigger things on their minds at this moment.

WORLD CHAMPIONS UP AGAINST A TEAM SHOWING PROMISING SIGNS

Heading into this series, England certainly seem to be the much stronger team. Recently, in the T20 International (T20I) series between the two sides, Eoin Morgan’s team came out on top in all three fixtures and that wasn’t a surprise, considering their prowess in white-ball cricket in recent times. Such mastery saw them lift the 50-over World Cup on home soil last season and while the victory in the final might have been by the finest of margins, there aren’t many arguments that can be made against England being the best team in limited-overs cricket at the moment.

On the other hand, South Africa haven’t been at their best over the last couple of years. While their results in Tests have been poor, they finished seventh in last year’s ODI World Cup. But at the start of 2020, they did well in ODIs, first drawing 1-1 against England and then whitewashing Australia 3-0. What was particularly impressive about the second of those series was the likes of Janneman Malan, JJ Smuts and Kyle Verreynne playing match-winning knocks.

In those two series, Lungi Ngidi was in magisterial wicket-taking form. Across four matches, he took 12 wickets and played a big role in his team’s success. His wicket-taking abilities, though, have never been in doubt. Across 26 ODIs so far, he has taken 53 wickets which is a fine return. It has been his economy rate that has been a concern at times, and if he can work on that, he could become one of the best bowlers in world cricket. This series will be a big test for him as he is the most experienced of the frontline bowlers for the Proteas.

While Kagiso Rabada will be missing for the hosts, England will also be playing without their premier fast bowler in Jofra Archer. So, it could turn out to be a key match for the fringe pacers on both sides to make a claim in the long run.

Between 2012-17, South Africa had the best run-rate (5.71) in ODIs among all teams. Since 2018, though, among teams that have played at least 25 matches in the format at the international level, only Zimbabwe (4.76), Afghanistan (4.83) and Ireland (4.84) have a lower run-rate than them (5.43). The most obvious difference between the two time frames is, of course, AB de Villiers. During the earlier period, he was at the peak of his powers and his retirement from international cricket in May 2018 definitely seems to have affected the scoring rate of the South African team. 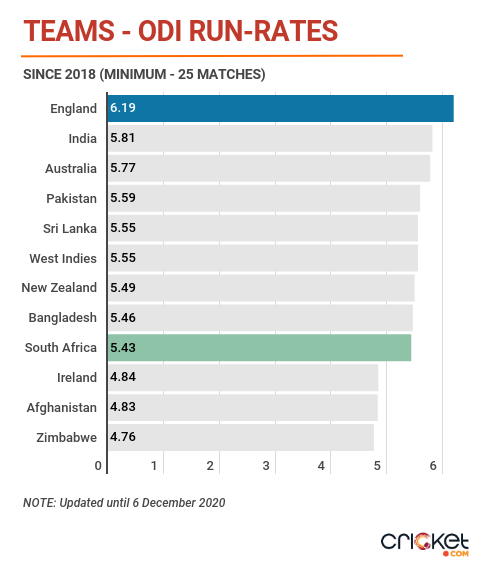 Meanwhile, when England had to endure an embarrassing first round exit during the 2015 World Cup, they were ridiculed by many for their failure to adapt to modern ODI cricket. What followed was nothing short of a cricketing revolution as they changed their approach drastically.

While they’ve been batting at an incredible scoring rate in ODIs since May 2015, in the time period we have considered – i.e since 2018 – they are easily on top, scoring at a run-rate of 6.19. That alone is spectacularly impressive, but when you consider that they have a 0.38 runs per over lead over the next best team – India – you truly get an idea of how extraordinary England’s batting has been in recent years in ODIs. On the back of that, not only are they the current world champions in the 50-over format, they are also the No.1 team on the ICC ODI rankings.

At the end of the day, though, it is far from certain that this match or series will go ahead at this stage. While we all love a game of cricket, the foremost priority should always be the safety and well-being of every individual.