Both scored their first hundreds on Indian soil

To all those including myself who did not give South Africa a chance in this match after the first two days, Dean Elgar first and Quinton de Kock later reminded us of the illusions that lie in presumptions.

Elgar’s hard-fought hundred was followed up by a fluent ton from De Kock that not only avoided the follow-on but also ensured that South Africa batted out the entire day and trail only by 117 runs.

Elgar’s defiance and counter-attacking approach stood out on a pitch that offered teasing moments of variable bounce against a bowling attack more adept than any other to exploit such conditions.

In one of the finest innings by a touring batsman in India in recent times, Elgar made the Indian bowler toil hard on another hot and humid day in Visakhapatnam. In three spells each from Ravichandran Ashwin and Ravindra Jadeja until tea, he provided a perfect blend of attack and defence.

Admired for his grit, Elgar relied on timing over power and played the field beautifully during his knock of 160. With a mindset to play with a straight bat, Elgar milked the long-on region by carefully playing the ball over the mind-on fielder frequently.

After a collapse during the end of the second day, South Africa did not start well. They lost Temba Bavuma in seventh over of the day when Ishant trapped him in front of the stumps to an incoming delivery. Starting the day with away-swingers, Ishant after a discussion with Kohli switched the approach to attack the stumps instead and it reaped a reward.

The tone of the rest of the day was set by the South African skipper Faf du Plessis. Facing his 13th ball of the innings, he hit Ashwin for two consecutive fours in an attempt to transfer pressure. Three overs later, du Plessis came down the track and hit him out of the park. Frequent boundaries forced Kohli to relax the field and offered easy singles to the batsmen. The pressure well and truly transferred albeit a little too early.

After reaching his half-century, Elgar took out a leaf out of du Plessis’s book and hit Jadeja for 16 runs in an over – first of four overs from the left-armer that went for more than 10 runs in the day.

India offered quite a few chances to the South African batsmen, the first off which came in the very next over from Jadeja when Wriddhiman Saha failed to collect a faint tickle off Elgar.

Du Plessis brought up his fifty after lunch but could not convert it into a big one when he edged one on the stumps from Ashwin to Cheteshwar Pujara at leg slip.
Elgar brought his first Test hundred on the Indian soil with a slog sweep maximum off Ashwin as he became the first South African left-handed batsmen to score a century in India since Gary Kirsten, who scored one in 1996.

De Kock, playing his first Test in India was given an initial lifeline when Rohit Sharma could not hold a tough chance at silly point off the part-time offie Hanuma Vihari, who was mainly deployed on two occasions – to change ends for the premier spinners or to bowl the overs leading up to the new ball.

After the chance, De Kock continued where Du Plessis left off. In his typical flamboyant fashion, De Kock hit Ashwin for consecutive fours and then Jadeja for a four and a six in the next over.

India used Vihari and Rohit Sharma for seven overs before the new ball, a period that was milked by De Kock and Elgar. The new ball did not help India’s cause as De Kock continued his aggressive approach as he first hit Ashwin for two fours and then Vihari for two consecutive boundaries who was once again brought in to change the ends of the ‘Ravis’.

Somewhat defensive field placement denied India another opportunity post-tea, as Ishant Sharma induced an edge of a cross-seam ball that climbed on Elgar only to go through the vacant slip cordon.

Jadeja, struggling to find the right pace on the pitch, was too quick to extract the turn that was on offer for slower balls (below 85kmph, Jadeja’s average was around 88 kmph). He was hit for two consecutive boundaries in an over by Elgar twice post-tea.

Slightly getting carried away with aggression, Elgar mistimed a slog sweep off Jadeja’s next over straight to deep square-leg where Pujara took a good running catch. Jadeja in his 44th Test hence became the fastest left-handed bowler to reach 200 Test wickets

Similar to his batting partner for the better part of his innings, De Kock brought up his fifth Test hundred by a six off Ashwin.

The off-spinner then plotted his revenge by deploying a three-ball set-up. He bowled two regular off-spinners to beat De Kock off the outside edge and then slipped a slider that bowled him through the gate. Ashwin then brought up his 27th five-wicket haul by bowling Philander through the gate, a dismissal similar to the one of Aiden Markram late on the second day.

Senuran Muthusamy, who was put down by Ajinkya Rahane on a tough chance at first slip in the first over he faced is looking solid at the crease and is accompanied by the fellow left-arm spinner, Keshav Maharaj.

Mohammed Shami, probably nursing a niggle, was well below par and lacked his usual rhythm and pace. Accept a jaffa he bowled to Du Plessis post-lunch that swayed away and went just over the stumps, Shami’s exploits with the ball throughout the day were forgetful.

While the demons of 2015 have been rested as South Africa claws their way back into the Test match, India is still ahead. Considering that the Proteas will have to bat on this wicket on the last day, another courageous effort will be needed to deny India an early advantage in the series. 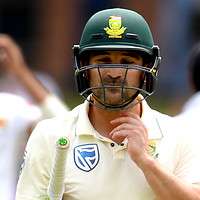