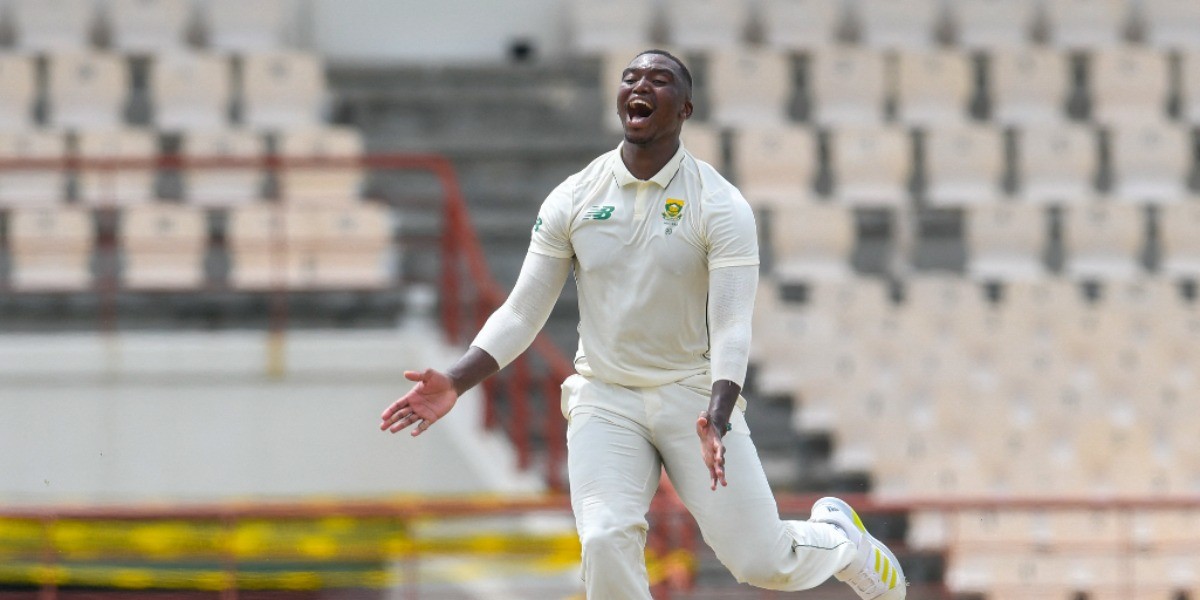 The Proteas have taken a 31-run lead with six wickets in hand on Day One of the first Test in St. Lucia

Lungi Ngidi mowed through the lower half of the West Indies batting order on the way to a five-wicket haul as South Africa routed the home side for 97 on the opening day of the first Test of the two-match series at the Daren Sammy Cricket Ground in St Lucia on Thursday (June 10).

Playing their first series in the Caribbean for 11 years, the Proteas reached the close of play at 128 for four, a lead of 31 runs. Opener Aiden Markram has top-scored so far with 60 but he was one of three wickets to fall to debutant West Indies pacer Jayden Seales, who also accounted for South Africa’s two newcomers Keegan Petersen and Kyle Verreynne.

Rassie van der Dussen will resume on the second morning in partnership with former captain Quinton de Kock. Ngidi’s haul of five for 19 was his second five-wicket innings haul in Test cricket, the bulk of his success coming in the afternoon session after seamer Anrich Nortje pushed the West Indies on the back foot with three of the four wickets to fall in the pre-lunch period.

He added another amid the final capitulation to finish with four for 35. That collapse featured a chaotic period either side of the lunch interval when the West Indies lost five wickets for 11 runs, including three with the score on 56, to be dismissed for their lowest-ever Test innings total against South Africa.

Jason Holder was last out for a top-score of 20, giving Ngidi the treasured fifth wicket. “We all decided on a particular plan of attack," said Ngidi of the disciplined off-stump line of all the fast bowlers which brought rich reward via safe hands in the slip cordon.

"It is really satisfying to get another five-wicket haul because I’ve come close a few times since that first ‘fifer’ so this is good reward for all the hard work."

It all looked very different though when captain Kraigg Brathwaite and opening partner Shai Hope successfully negotiated a testing first 45 minutes. But the introduction of Nortje brought almost immediate rewards in removing Hope to end an opening partnership of 24.

He then bowled Brathwaite in his next opener, the phlegmatic right-hander, who had chosen to bat first on winning the toss, paying the ultimate price for an error of judgement when he opted to offer no shot to delivering angling into him.

Rabada had toiled impressively at the other end without success until he got the deserved reward of the wicket of Nkrumah Bonner. Struck flush on the helmet when he was late on a hook shot first ball at Nortje, he could do nothing to a perfectly-pitched delivery from Rabada which took the edge through to wicketkeeper de Kock.

Bonner was subsequently diagnosed with a concussion and will play no further part in the match. His place in the West Indies eleven has been taken by opening batsman Kieran Powell. De Kock, leader of South Africa in their previous four Tests, had earlier opted to neither take a knee nor raise a right fist, unlike his teammates on the field before the start of play as the South Africans joined with the West Indies team in acknowledging the global Black Lives Matter movement and their concerns about racism and other forms of discrimination.

Nortje returned for a second spell just before lunch and despatched an unsettled Kyle Mayers without too much difficulty and then triggered the final early-afternoon capitulation with the wicket of Jermaine Blackwood.

That left Ngidi to feast on the rest of the batting and he did not waste the opportunity, reaping the rewards of a tight, disciplined line in prising out Roston Chase, Joshua da Silva and Roach in quick succession before adding Holder to end the innings.

This is the first meeting in Test cricket between the two teams in the West Indies since 2010 and the first time since their historic one-off meeting in 1992 in Barbados that the Caribbean side are ranked higher than the Proteas ahead of a series.