As teams get shorn of their foreign stars, the gaping holes cause fresh problems as the league enters the business end

Finally, daylight. Just 12 matches to go, including today’s clash between 4th placed SRH and 7th placed RR, before we get into the business end of an overlong league.

This is when a league tournament begins to resemble the final turn before the straight in a middle-distance race. The pace-setter (CSK) is out in front, hoping it has the legs to hold on during the final stretch. The principal challengers (DC, MI, SRH and just possibly, KXIP) are jostling each other and looking for the opportune moment to launch a spurt. The laggards (KKR, RR and RCB) provide the nuisance value; unlikely to make a podium finish but always threatening to trip up one of the front-runners.

In such situations, defeat to a lower-ranked team exacts an inordinate cost on a front-runner, which is why SRH, now on 10 points off ten games, is under tremendous pressure because it has to win, while the Royals with nothing to lose can play with free minds on its home ground.

This is also the phase of the tournament when teams, having spent the previous ten or so games fine-tuning their squads, have to go back to the drawing board and do it over, because pivotal players begin to leave for national assignments.

SRH has lost Jonny Bairstow, who formed the season’s best opening combination with David Warner - who, incidentally, is likely playing his last game before he too leaves. An immediate problem for SRH therefore is finding Bairstow’s replacement - an opener who is also a wicket-keeper.

SRH has two options: Wriddhiman Saha and Sreevats Goswami. In the 2018 season, Saha was first choice - his keeping skill is not in dispute; with the bat, he scored 122 in ten innings at 119.06. SRH benched him at the back end of the tournament and brought in Sreevats Goswami, who in three innings scored 52 at 130.0.

Neither is a like for like replacement for Bairstow, who ended a stellar 2019 season with 445 runs in ten innings, with a century, two fifties, two not outs and a strike rate of 157.24 which ranks him ninth among all players this year, ahead of even his partner David Warner who strikes at 146.05.

SRH will likely bring in Goswami, which solves one problem - and buys a brief respite before Warner leaves and SRH finds itself deprived of the two players who, between them, have scored 1019 runs of SRH’s aggregate of 1520 in ten games this season. (Incidentally, those two rank first and second in runs scored by all batsmen this IPL).

Against that, SRH’s captain Kane Williamson is back, which provides the team with a strong number three capable of coping with the loss of an early wicket - but it also creates its own problem, and his name is Mohammed Nabi.

This IPL has been full of inexplicable decisions, but none quite as bizarre as this: the Afghan finger-spinner was fielded in just four games, while Williamson was recovering from injury. In those games, his 15.5 overs cost him 87 runs. His economy rate of 5.49 is the best of all bowlers this season (and it is worth pointing out that he bowls in the powerplay, unlike his countryman Rashid). His strike rate of 13.57 ranks him fourth, behind Rabada, Harbhajan and Bravo.

Bringing Nabi in becomes all the more important because SRH lacks real pace at the death, as the chart above indicates.

So how do you not put Nabi’s name down as your first pick when selecting a playing eleven? Graeme Smith, one of the better commentators going round, made the point that teams tend to adhere to certain dogmas; finger spinners are relatively ineffective against right handers is one of them. All you have to do is look at the performances of Ravi Ashwin, Bajji etc to realize that a good spinner is a good spinner, period.

The most logical lineup for SRH is: David Warner, Sreevats Goswami, Kane Williamson, Vijay Shankar, Manish Pandey, Deepak Hooda, Mohd Nabi, Rashid Khan, Bhuvi Kumar, Khaleel Ahmed and Siddarth Kaul. The two players dropped are Shakib al Hasan (economy rate 9.0, strike rate 46.0, the worst of all SRH bowlers) and Yusuf Pathan, who with 37 runs in 7 innings (5 not outs) with a strike rate of just 90.24 batting at the death is clearly not worth his place. 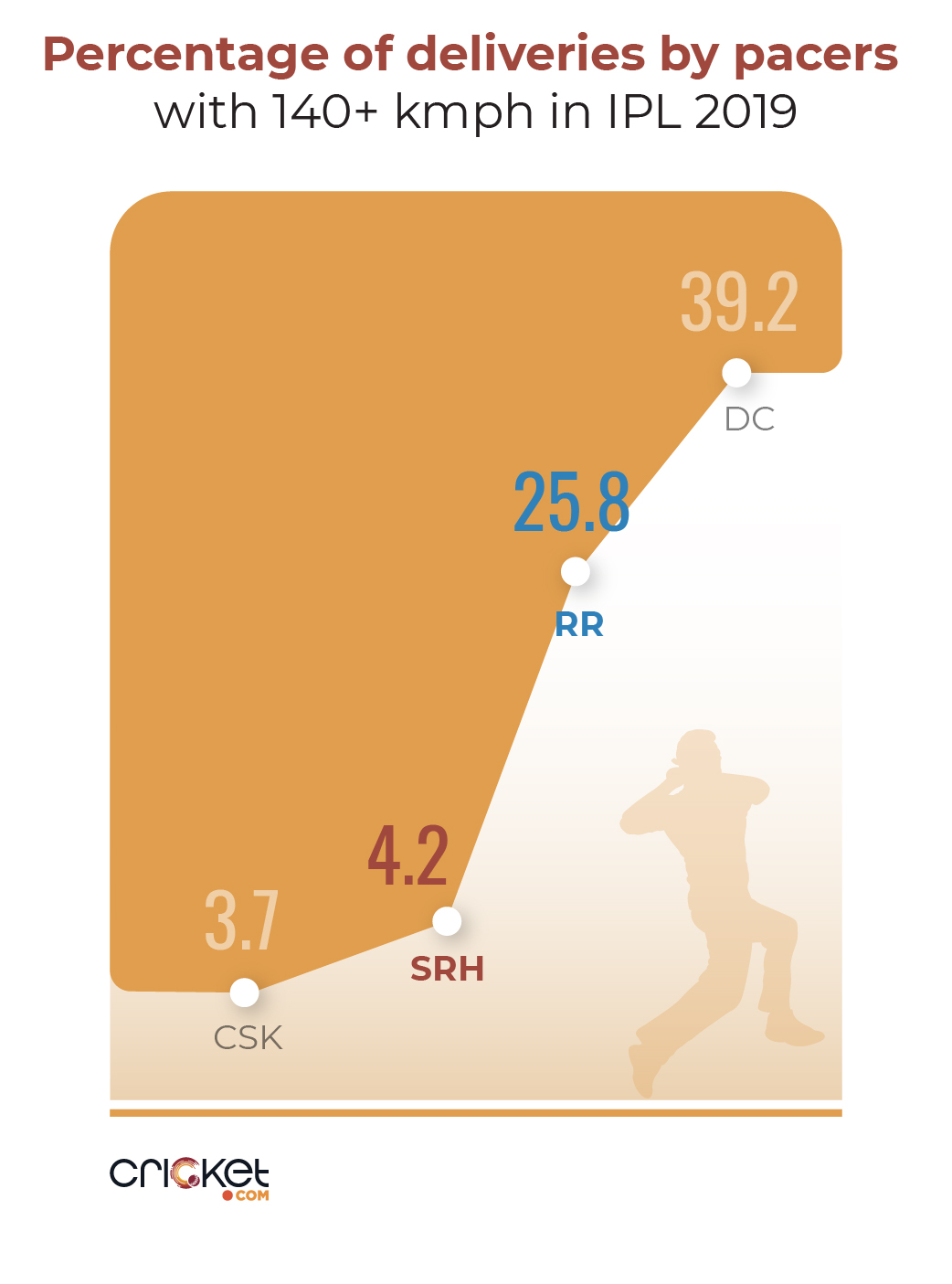 As with SRH, so with the Royals: The Rajasthan franchise has two huge holes in its lineup: Jos Buttler at the top of the order, Ben Stokes in the middle, and Jofra Archer as spearhead of the attack.

With Ajinkya Rahane back in form and paired with Sanju Samson at the top of the order, that is one problem solved. Archer’s absence is more crucial: his 11 wickets in as many games have come at an economy rate of 6.76, all the more impressive because he routinely bowls two overs at the death and at least one in the powerplay, and a strike rate of 23.45.

With his departure, Royals lose both pace and control – Jaidev Unadkat strikes at 27.71 and has an economy rate, if you can call it that, of 11.22; Dhawal Kulkarni has a better ER of 9.57, but against that his strike rate is 35.

Fortuitously for the Royals, Varun Aaron appears to have rediscovered his form - in the Royals’ heist against KKR at the Gardens on April 25, Aaron bowled with both penetration and control, taking two wickets for 20 in his four overs (in which an impressive 17 were dot balls) at an economy rate of just 5 - a remarkable performance, albeit on a pitch with more pace and bounce than the Sawai Man Singh Stadium will provide.

If he can maintain that form, then the Royals’ problem is mitigated: Aaron with Oshane Thomas bowl at both ends of the innings (though it needs mentioning that Oshane is not known for his death-overs bowling); Shreyas Gopal is the spin enforcer in the middle and Dhawal Kulkarni is the third seamer while Unadkat sits out. The question is who bowls alongside Shreyas in the middle; the logical answer is Krishnappa Gowtham. His record this far has been far from impressive: 16 overs in six games, for one wicket at a strike rate of 96 and an economy rate of 9.37. But the Jaipur ground, despite being conducive to reasonably high scores, does provide some assistance to spinners (the lowest on the ground this season was RR’s 139/3 against KKR, but that was a bad batting performance on a good track, as KKR showed when it chased down the runs with 6.1 overs to spare for the loss of just two wickets).

The logical lineup for the Royals would be Rahane, Samson, Steve Smith, Rahul Tripathi, Riyan Parag (who can chip in with a couple of decent overs), Stuart Binny, Ashton Turner (Yeah, he has enough ducks to start his own poultry farm, but hey, law of averages), Shreyas Gopal, Oshane Thomas, Varun Aaron, Dhawal Kulkarni.

The last time these two teams faced each other, the Royals put up a seemingly impressive 198/2 on the back of a Rahane 70 and Samson’s unbeaten 102 off 55, batting first at Hyderabad - but a dawdle in the middle overs meant that RR was below par for the ground, and SRH rubbed it in by chasing down the target with an over to spare.

In the return fixture, the stakes are sky high for the SRH - and it will look to David Warner, easily topping the table for most runs scored (there is a 129-run gulf between Warner’s 574 and next best Jonny Bairstow, who aggregated 445) to give himself an appropriate send off as he walks out for his final innings this IPL.