Afghanistan have had many memorable moments over the last few years and for a long time, it looked like another one would come against Sri Lanka at Sophia Gardens, Cardiff on Tuesday. It wasn’t to be though as Sri Lanka came up trumps with a magnificent bowling performance to win by 34 runs (via Duckworth-Lewis-Stern method).

Coming into the World Cup, the tournament was expected to be a series of high-scoring contests. While this match is still likely to be an exception rather than the rule, it was a reminder of how you don’t always need big hits to be entertained. On most occasions, you would expect the team batting second to chase down a target of 187 from 41 overs and that is what made Sri Lanka’s bowling effort so special.

With both teams coming into this game on the back of defeats in their respective tournament openers, few anticipated a match that would ebb and flow like this encounter did, especially during the second innings.

Chasing a modest total, the opening pair of Hazratullah Zazai (30 off 25) and Mohammad Shahzad (7 off 12) got their team off to a solid start, but once the latter was dismissed by Lasith Malinga (3/39) with the score on 34, the trumpets in the Sri Lankan section of the crowd started playing again. The trumpets got louder as Afghanistan slumped to 57/5 soon after.

At this point, it looked like Gulbadin Naib’s side would falter away quickly, but just like their previous game against Australia, it was the captain and Najibullah Zadran (43 off 56) who fought back brilliantly. The duo batted with great maturity and put their side in the driver’s seat once again.

It was Nuwan Pradeep (4/31) who did the star turn for Sri Lanka as he produced a remarkable spell to get rid of Gulbadin (23 off 32) and then the dangerous Rashid Khan (2 off 4). Pradeep, who had already got the better of Hazratullah and Hashmatullah (4 off 17) earlier, used the conditions stupendously to fox the Afghan batsmen with his crafty in-swinging deliveries.

From 121/5 to 123/7 in the space of nine deliveries and the match had firmly turned in Sri Lanka’s favour. Najibullah, though, wasn’t giving up. He found a reliable partner in Dawlat Zadran (6 off 18) who stuck around enough to give Afghanistan’s supporters hope once again.

Over the last decade, if there’s one bowler you’d want to bowl at tail-enders, it would be Malinga. The veteran pacer showed why as he produced a peerless yorker to end Dawlat’s resistance with the bat.

Najibullah kept fighting, slamming two boundaries off the next over, but as he attempted to sneak a single off the last ball, a direct hit from Dimuth Karunaratne at mid-on caught him well short of the crease. It was heartbreak for the 26-year-old who has shown immense mettle in the tournament so far.

Malinga finished proceedings with another perfect yorker and the Sri Lankans will breathe a huge sigh of relief after passing this topsy-turvy test.

Earlier in the day, the match was shaping into an entirely different direction as Sri Lankan openers Kusal Perera (78 off 81) and Karunaratne (30 off 45) took the attack to the Afghan pace bowlers early on. The Lankans raced off to 79/0 off the first Power Play and looked set for a big total.

It was Mohammad Nabi who changed the state of the game as he notched up career-best bowling figures of 4/30. The experienced all-rounder broke the opening partnership in the 14th over with Karunaratne gifting an easy catch to long-on.

It was the 22nd over, though, where the match turned on its head as Nabi picked up three wickets and Sri Lanka slipped from 144/1 to 146/4. What looked like a batting dream suddenly turned into a graveyard for the batsmen! Interestingly, before this match, the 34-year-old Nabi had just three World Cup wickets and he managed the same in just one over here!

Afghanistan’s bowlers didn’t let the opportunity slip and reduced Sri Lanka to 182/8 before the skies opened up. After a delay of almost three hours, play resumed and the 1996 World Cup winners were soon bowled out for just 201. With the DLS method coming into play, the revised target was 187 which the Karunaratne-led team defended superbly. 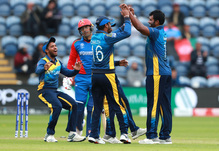