Sri Lankan wizards unable to put on a show together 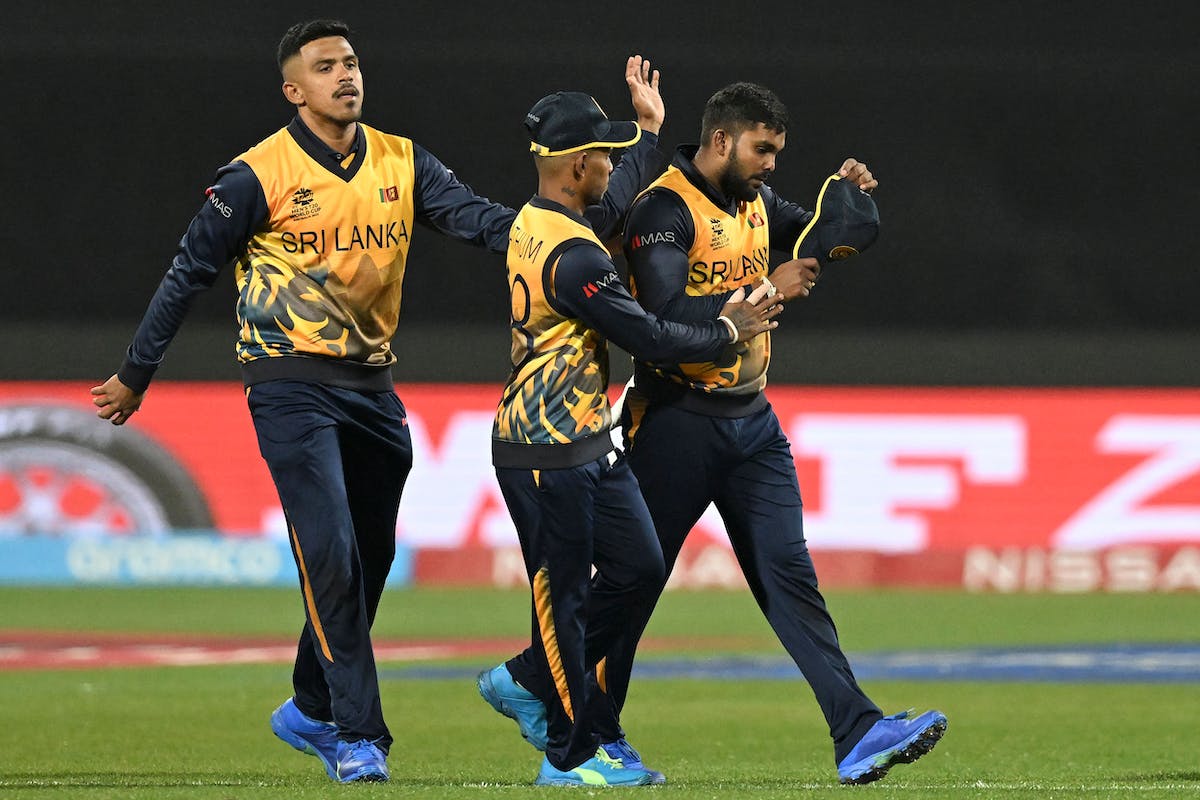 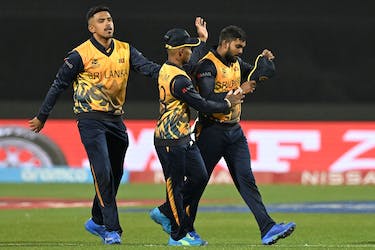 Sri Lankan wizards unable to put on a show together

If Theekshana comes good, Hasaranga doesn’t or the vise-versa, the story of Sri Lankan premier spinners this World Cup

Imagine an in-form Kagiso Rabada and Anrich Nortje bowling in tandem. That would be a nightmare for any batting team. Similar to them, Sri Lanka have a deadly duo in the form of Wanindu Hasaranga and Maheesh Theekshana. The only thing is, they aren’t fast bowlers, but top spinners.

These are decent numbers in T20s, but what Sri Lanka will be hoping for in their last and all-important clash against England is that both come good together. So far in the four matches played by Sri Lanka, one has blown hot and the other has gone cold. They have never shined together. 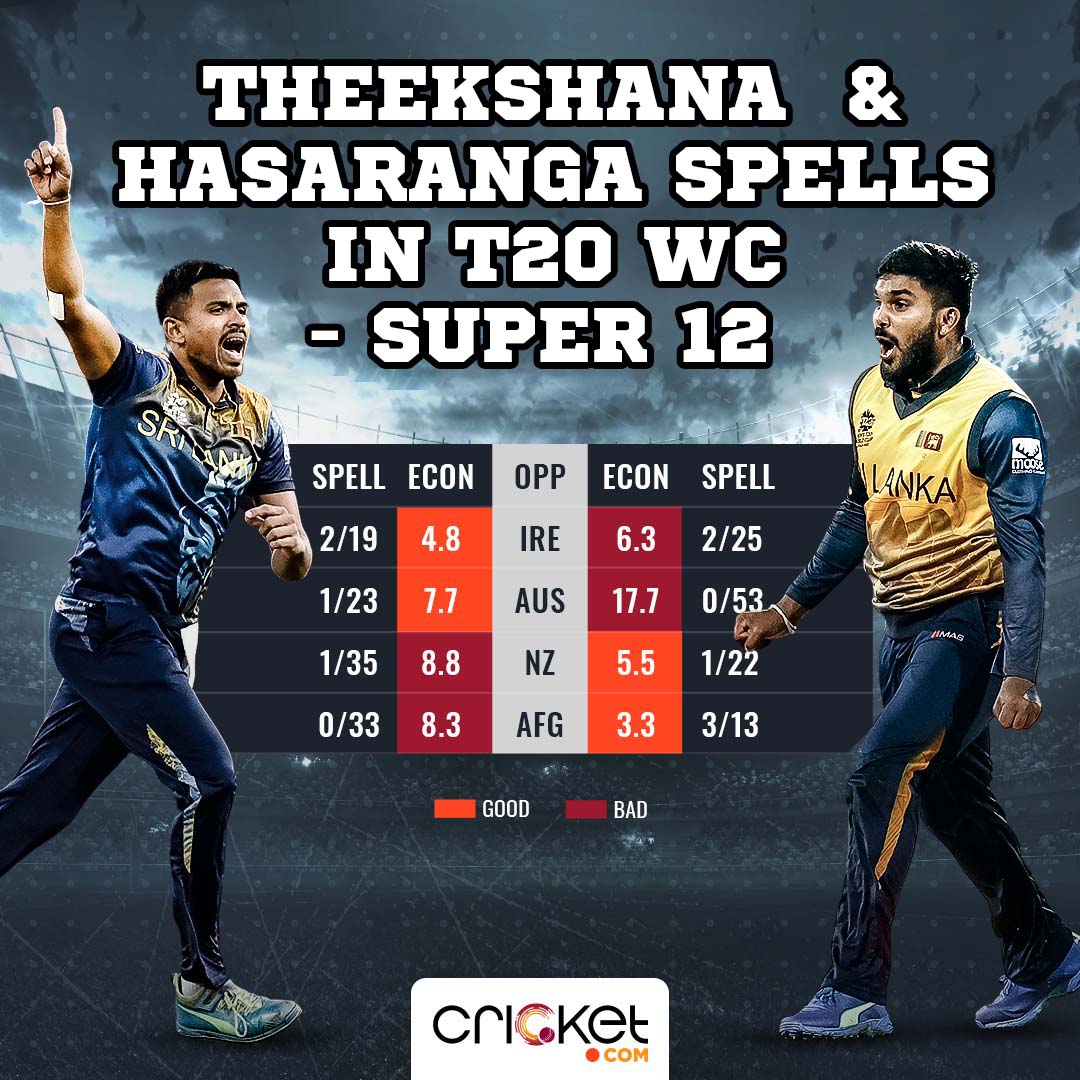 In the first two matches, against Ireland and Australia, Theekshana was the better bowler, picking 2/19 and 1/23 respectively. In the last two matches, Hasaranga has outperformed Theekshana, pouching 1/22 and 3/13.

Paltry contributions in the middle overs

Middle overs (7-15) are spinners' forte, but that hasn’t been the case with both the bowlers in this World Cup.

Theekshana’s 15 overs in the Super 12 stage have been split into five overs across the phases. On the other hand, Hasaranga hasn’t bowled a single over in the powerplay. 80 percent of his overs (12 out of 15) have come in the middle overs. 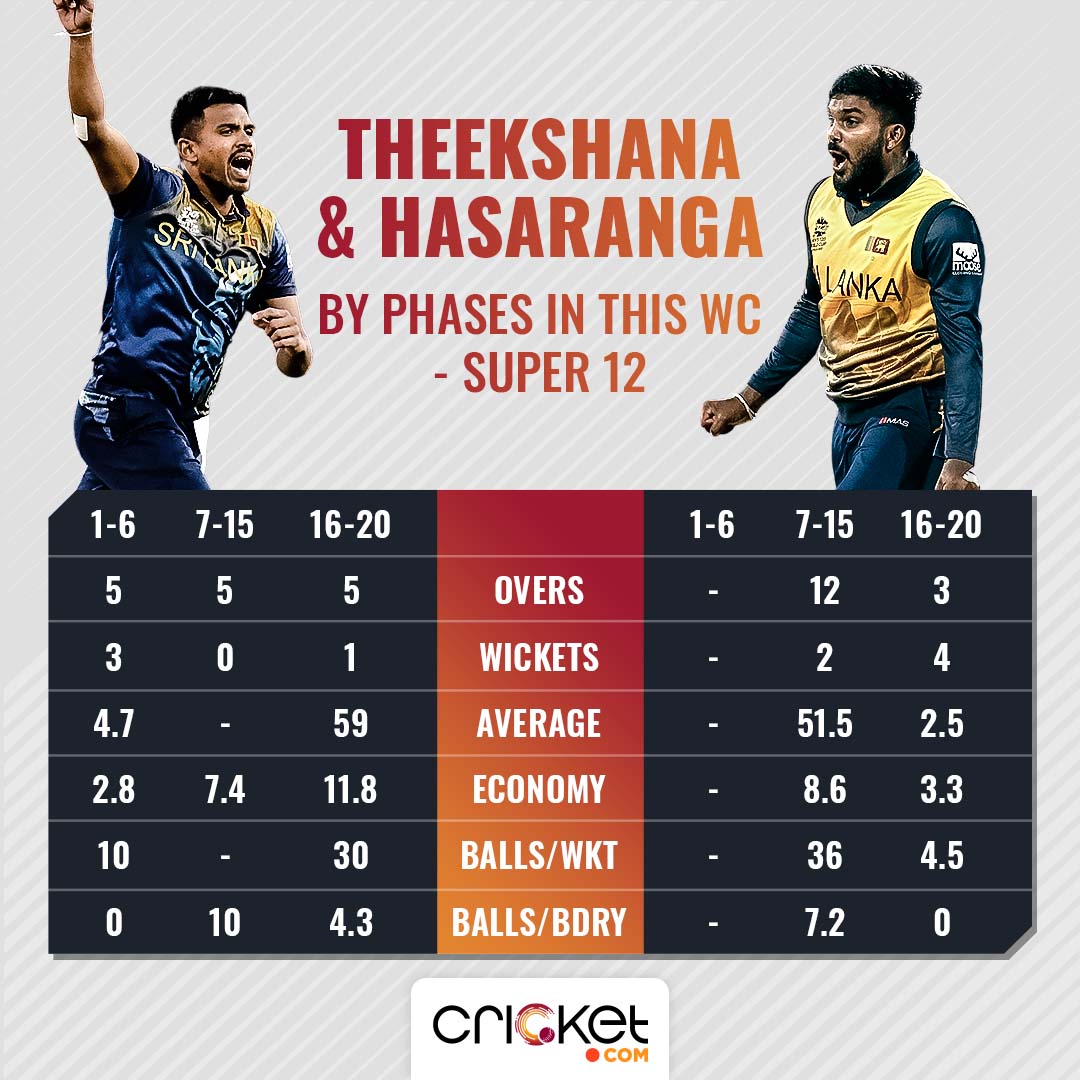 Three out of Theekshana’s four wickets have come in the powerplay at an economy of 2.8 and a bowling strike rate of 10. In the middle overs, the mystery spinner has been wicket-less and has conceded at 7.4. During the slog overs, he has been taken to the cleaners.

66.7 percent of Hasaranaga’s wickets (4 out of 6) have come during the slog overs. Withal, all his four wickets in the slog overs came against weaker opponents, Ireland and Afghanistan. In overs 7-15, Hasaranga has only two wickets at an economy of 8.6 and has picked up a wicket every 36 balls.

To sum it up, both bowlers have been fairly ineffective in the mid-phase phase. As an aftermath, Sri Lanka’s record in the middle overs has been poor. Their runs/wicket ratio of 36.5 and their economy of 8.1 is the third worst for a team in this phase.

The curious case of Theekshana’s usage

Theekshana has been underwhelming in matches where he was required to step up. Consequently, it cost Sri Lanka two matches. More than these two performing together, what has been more baffling is the usage of Theekshana, especially against Australia and New Zealand.

There is no doubt that Theekshana is a good powerplay bowler and his couple of overs in this phase are crucial for Sri Lanka. What about the rest of his overs? Let’s keep aside the first game against Ireland.

Hasaranga was then introduced in the eighth over and was carted for 15 runs. In the following over (ninth), Dhananjaya de Silva went for 13 runs and Hasaranga conceded 19 in his second. Theekshana bowled the 11th over and conceded only one run. He was immediately taken off, with two overs still remaining. 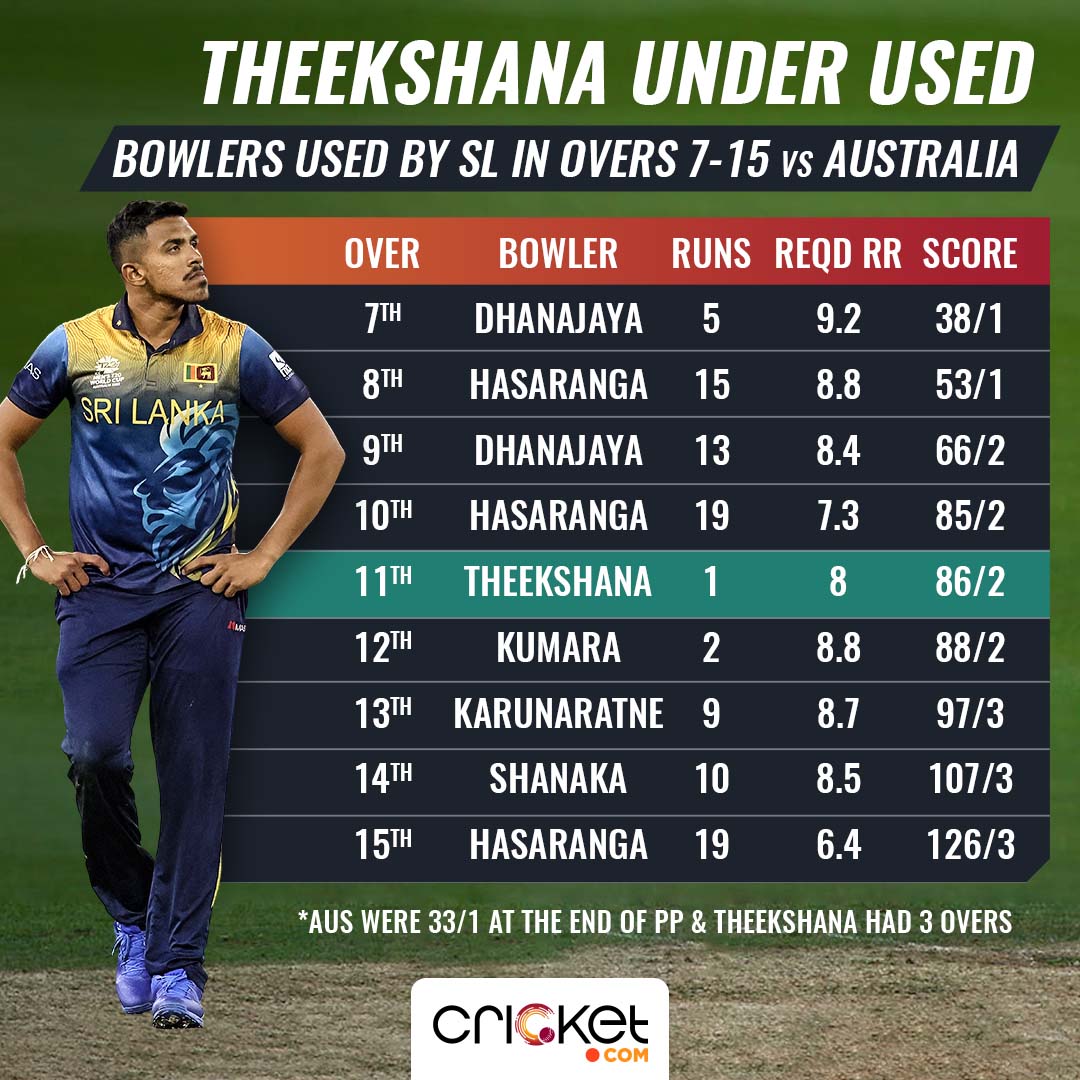 They let the momentum slip. Chamika Karunaratne conceded 9 runs in the 13th, Dasun Shanaka went for 10 in the 14th, and Hasaranga in his third (15th) again leaked 19 runs. By the time Theekshana was introduced for his third over, Australia needed 32 of 30 balls with seven wickets in hand. It was a waste of a precious resource.

Similarly, against New Zealand, he bowled two overs upfront and picked up the important wicket of Finn Allen. He conceded only seven runs in his two overs. At the start of the middle-overs phase, New Zealand were tottering at 25/3.

A team that struggles against spin, on a pitch conducive for spinners and the pressure of being 25/3 in the first six overs. Sri Lanka had the perfect platform to unleash their magicians. Astonishingly, that wasn’t the case.

Hasaranga at one end held things for Sri Lanka. He bowled all his four overs in between 7-15, and conceded at 5.5 with a wicket to go along. The damage was caused at the other end. When Hasaranga went at 5.5 runs per over, other Sri Lankan bowlers combined conceded at 11. 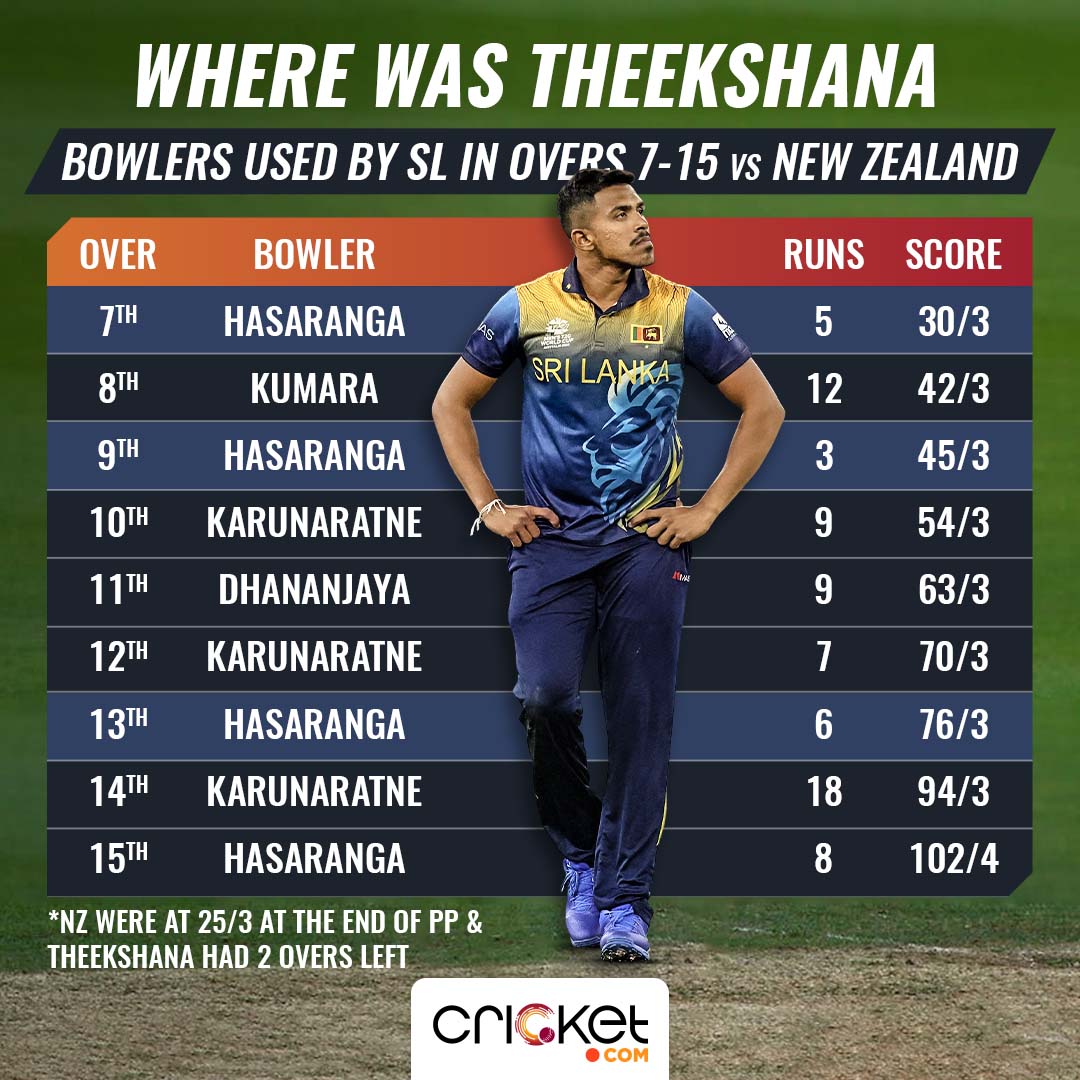 Despite pressure being leaked from the other end, Sri Lankan skipper Shanaka never looked to bring Theekshana into the attack. His remaining quota of two overs were bowled in the final five. By then, Phillips was well set and took the opportunity to ruin his figures. Out of the 12 balls Theekshana bowled at the death, Phillips alone faced seven and scored 23 runs.

Fair to say, in a big tournament like the World Cup, a team cannot afford to win matches against top quality sides with these kinds of blunders. Especially when the two have bagged 42.5 percent of the wickets for the team in wins in T20Is his year. Shanaka! If you’re reading this, you need to bowl your best bowlers in tandem if you are to win this.