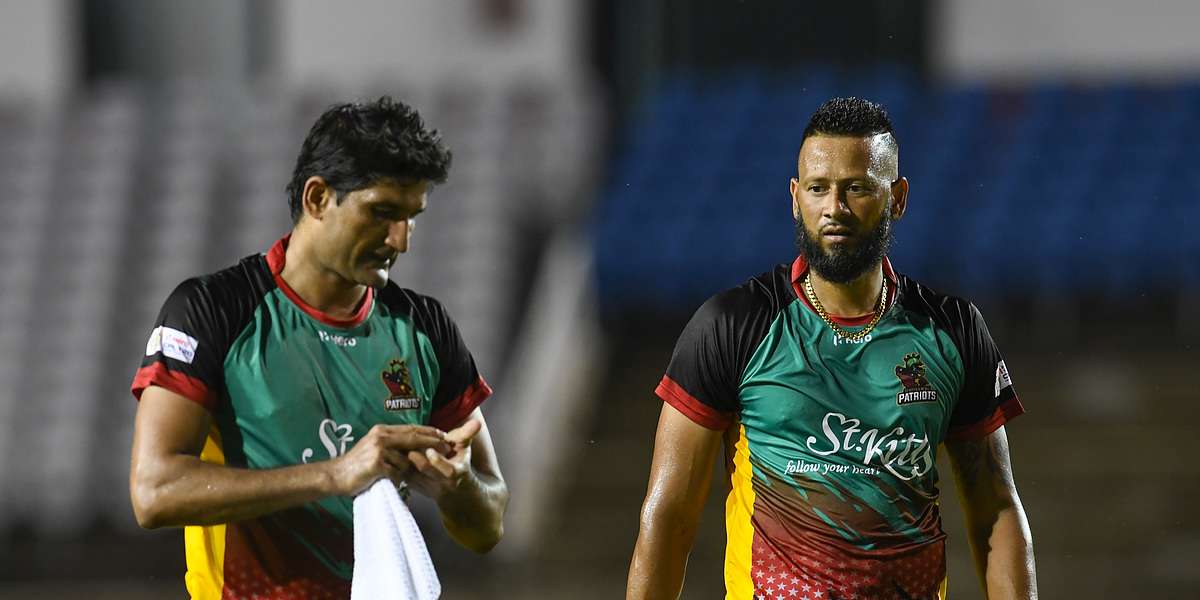 New gigs and a new start to the CPL 2020 as the 2nd leg of the season shifts to Port of Spain. Barbados Tridents will go up against St Kitts & Nevis Patriots in the 1st match at Port of Spain this season. Both teams are looking for respite, especially the Patriots. The Nevis Patriots are yet to get off the mark in the points table. As for the defending champs, they need to regroup. Tridents won their first match and have lost the next two. In any case, with a 36.3% win percentage overall for Tridents against the Patriots isn’t a good sign. In the reverse leg of the match, Tridents had the better of the Patriots in match 2. 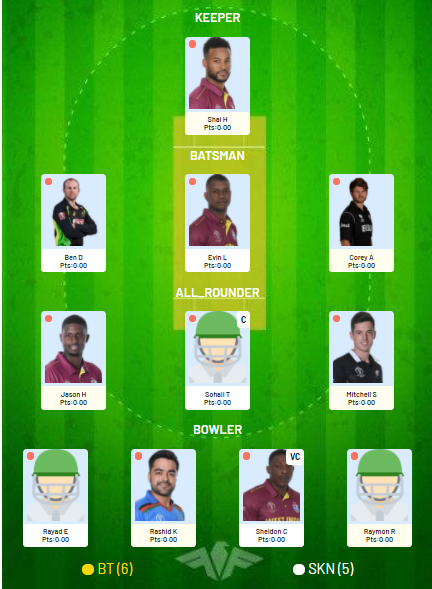 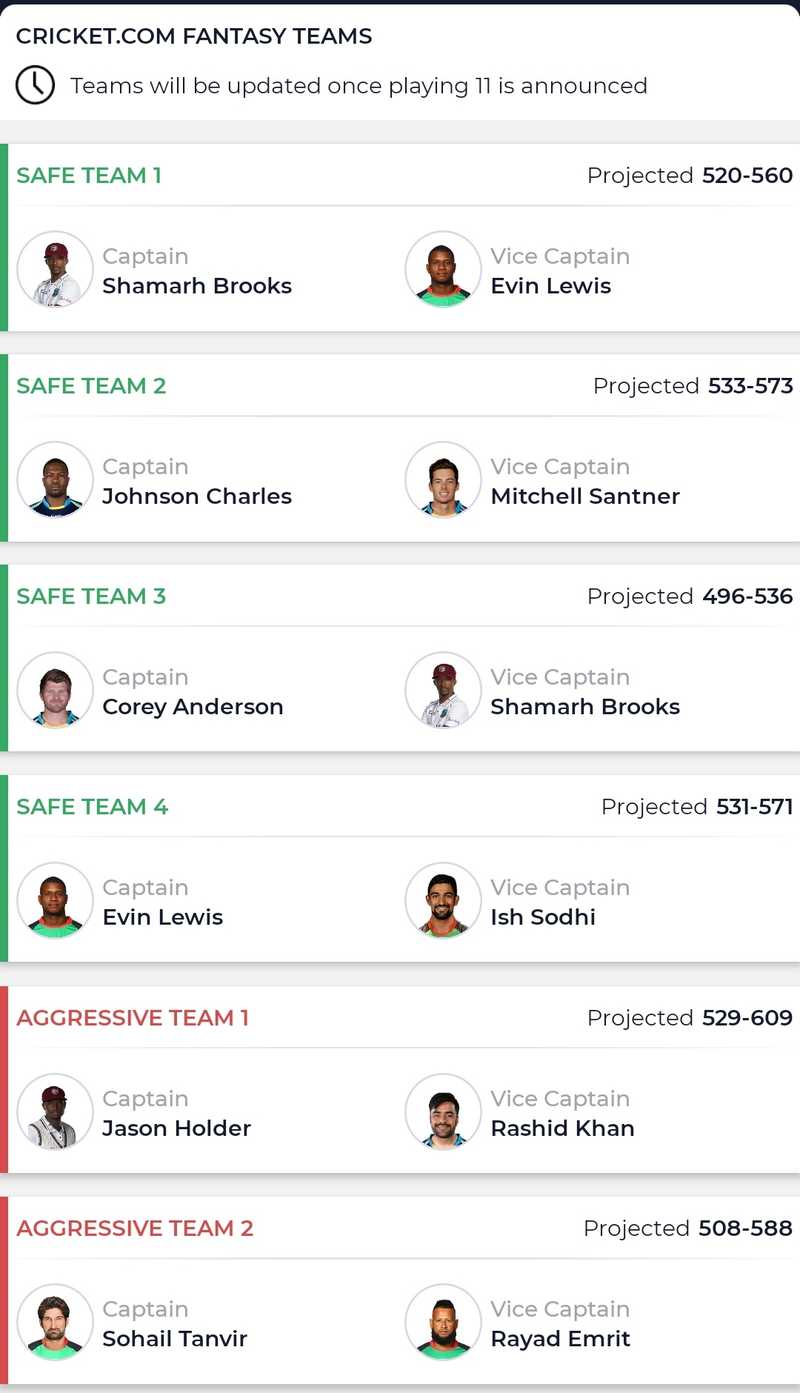 The pitch at the Queen’s Park Oval has been contrasting to the one at Brian Lara Stadium in CPL since 2018. At Tarouba, bowlers were on top, but at Queen’s Park the batsmen have done well. 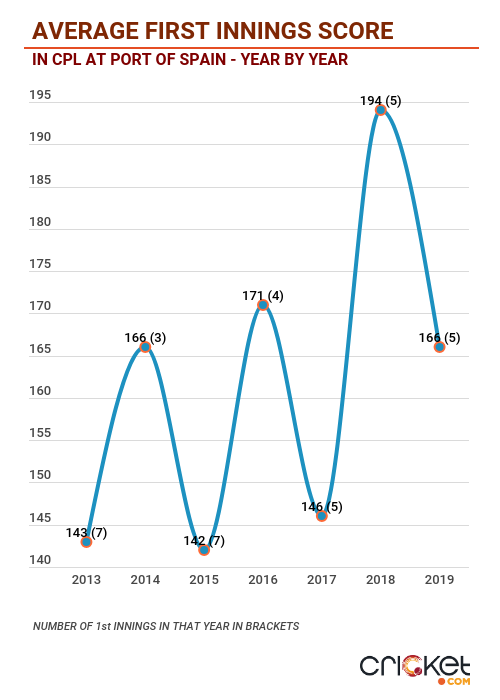 Since 2018, at Port of Spain, the pacers have been the most influential ones. In 20 innings, the pacers have bagged 64.5% of the wickets at a much better balls/dismissal and average. In fact, 35.5% of wickets bagged by the spinners is the lowest at a venue since 2018. 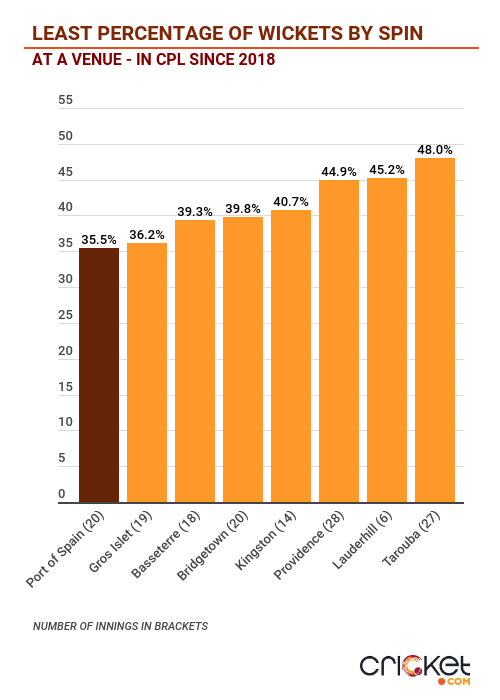 On the other hand, it’s the complete opposite for Tridents. The spinners have bagged 64% of wickets, which is the most and pacers have taken 27%, which is the least.

Both teams have a good set of allrounders, and both teams are slightly reliant on their bowlers. Packing it with bowlers and allrounders should be the way to go in this match.

The likes of Evin Lewis and Ben Dunk have the advantage of being left handers and Rashid Khan's record isn’t a happy one against the lefties. Chris Lynn against Rashid and Santner isn’t advisable.

Though it doesn’t support the spinners, Rashid isn’t a spinner whom you can drop. On any kind of surface, he can be deadly. Sheldon Cottrell, Rayad Emrit are also some of the must have pacers. The Tridents captain, Jason Holder, Sohail Tanvir and Mitchell Santner are hot picks among the allrounders.

Lynn generally is successful against the pacers, hence it isn’t a surprise that he has a good record against the Tridents skipper. Holder in the 4 innings he has bowled to Lynn in T20s has gone for runs at a strike rate of 222.2. 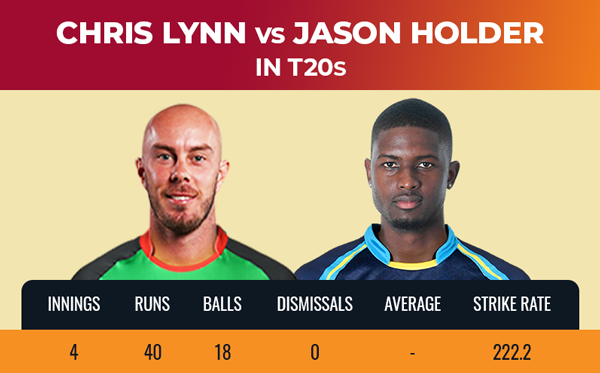 The Kiwi left-hander is yet to get off the mark against Cottrell in the two innings he has batted in T20s. On top of it, both the innings Cottrell has got the better of Anderson. 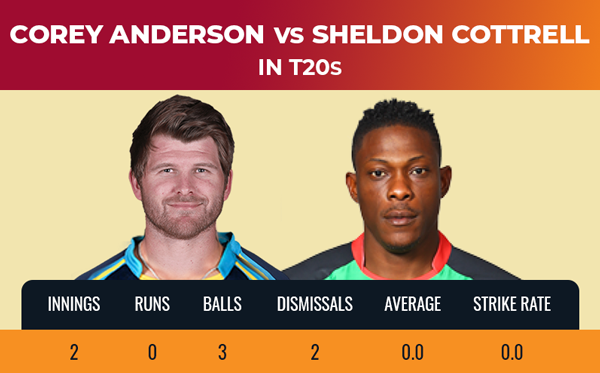 Charles has had his difficulties against Cottrell in T20s. In a competition versus the opening batsman and bowler, Cottrell has bettered it with three dismissals against Charles in a 7 innings face-off. 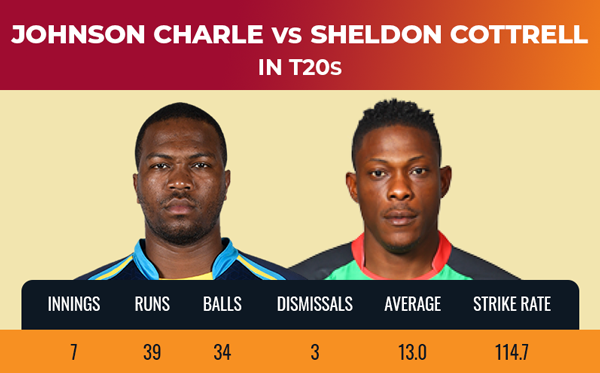 Throughout his T20s career, Hope has had the fame of being a batsman who can anchor the innings. But, that’s not the case when he has faced Emrit in T20s. In the 17 balls he has faced him he has a strike rate of 223.5 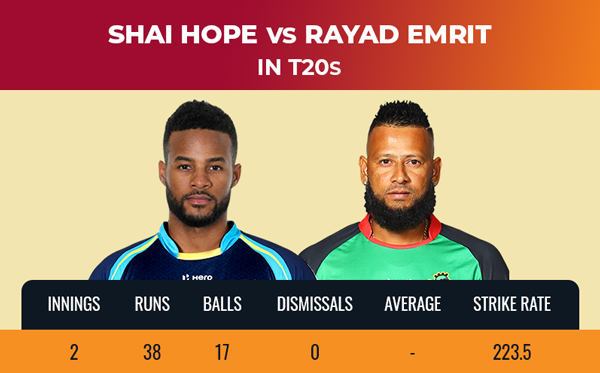 SOHAIL TANVIR: In the two matches this season the left arm pacer has done excellent. In both the matches he has bagged two wickets each. What’s fascinating is, his record against the Tridents is exceptional, which is why, he is our suggested captain. 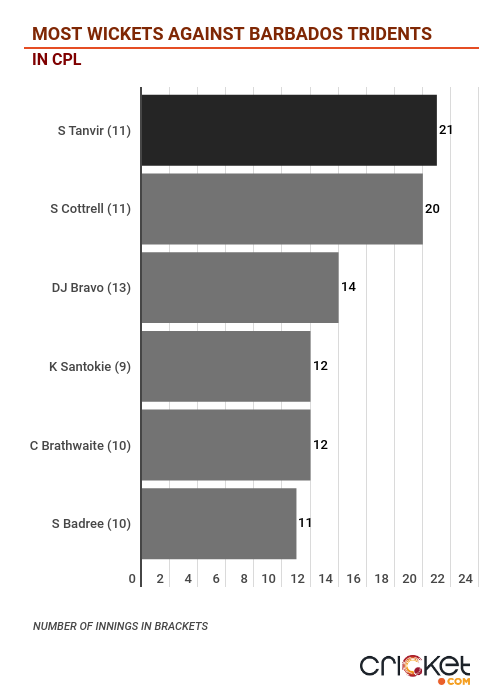 His 21 wickets against the Tridents in 11 innings is the most by a bowler against them in CPL. At the venue he has bagged 7 wickets in 5 innings he has bowled at a balls/dismissal ratio of 13.7.

Our Criclytics player projection predicts he would pick 0-3 wickets

SHELDON COTTRELL: The two opening bowlers of Patriots are hunters against the Tridents. If Tanvir has bagged the most wickets, Cottrell isn’t far off. He has bagged 20 wickets against them, the 2nd most against Tridents in CPL. Cottrell’s record against the current Tridents batsman is also staggering. Just as we saw in the match-ups, against the main batsmen of the Tridents, Cottrell has been a nightmare. This advantage surely makes him as one of the X-factors.

Our player projection predicts he would bag 0-3 wickets.

EVIN LEWIS: Lewis has been the most successful Patriots batsman in this season of CPL with 71 runs in three innings. Though it is not convincing, his record at the venue is something to consider. He has scored 225 runs at this venue, which is the 2nd most for him in CPL. 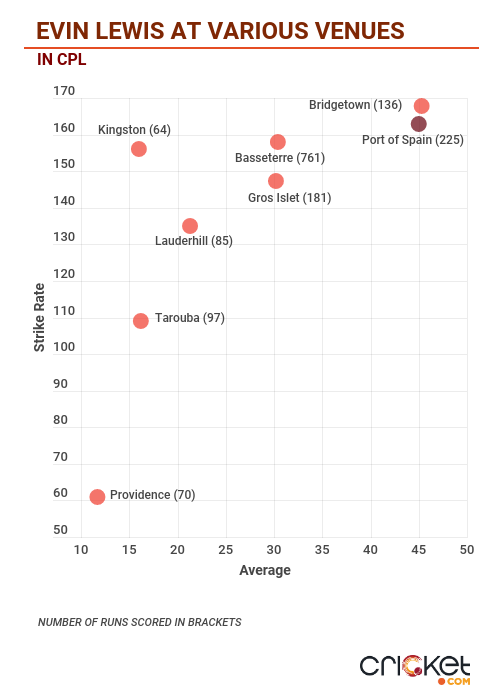 Against the Tridents as well, Lewis has a decent record in CPL. He has scored over 250 runs in 12 innings at a good strike rate of 143. With an advantage of both, venue and opposition, Evin Lewis is one of our X-factors.

Our Criclytics player projection predicts he would score 14-37 runs.

JASON HOLDER: Jason Holder has taken a liking towards the Patriots in terms of batting. His 144 runs against the Patriots is his personal best in CPL and his only 50+ score also came against them. Holder this season, has been more of a batsman than a bowler for Barbados. He is the highest run-scorer for them this season with close to 100 runs at an average of 49.5 and a whopping strike rate of 187.

Our Criclytics player projection predicts he would score 8-25 runs and pick 0-3 wickets.