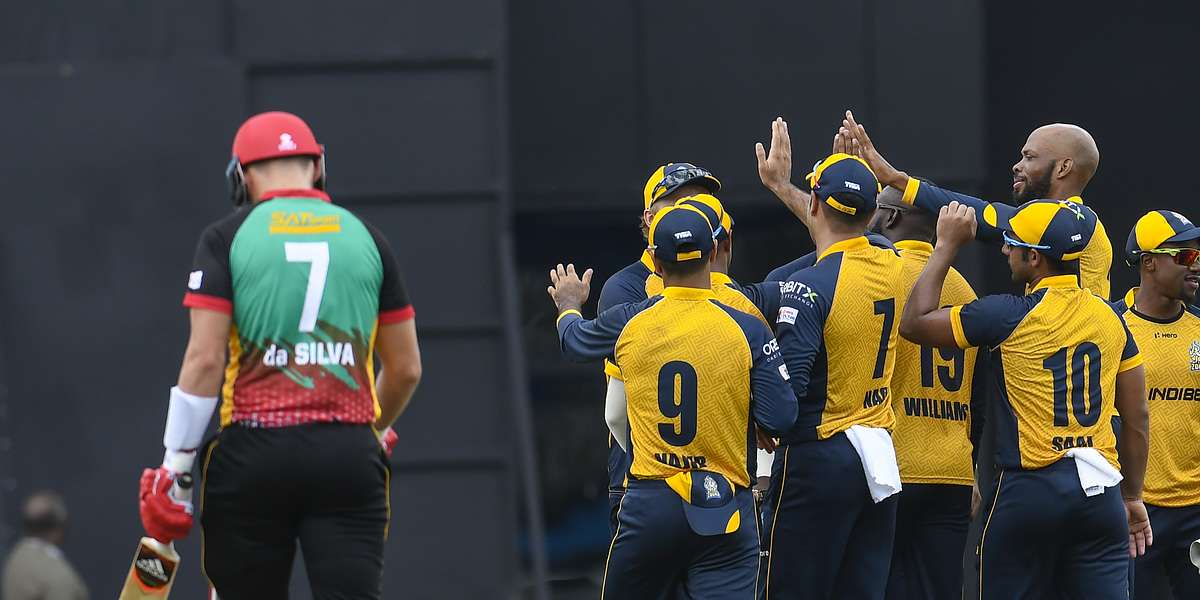 For a side that took the field to avoid their third defeat in as many games, St. Kitts and Nevis Patriots looked overwhelmed by the task rather than motivated to turn the tide. Their effort on the field was a compilation of undisciplined bowling, sloppy fielding and an uncovincing batting performance.

Though Patriots lost by only 10 runs but the margin was squeezed by Sheldon Cottrell's late flourish where he scored runs at a similar pace at which he leaked them with the ball.

They managed only 12 runs out of Roston Chase's four overs who was employed by Darren Sammy to establish the match-up between the off-spinner turning the ball away from the left-hander. Consequently, he dismissed the lynchpins of Patriots' line-up - Evin Lewis and Ben Dunk, both left-handers - alongside Joshua Da Silva to his pocket.

Lewis was the critical blow. On a pitch where run-scoring became tough as the ball turned softer, the southpaw launched Patriots to a brisk start almost single-handedly. He scored 28 off 16 balls in a score of 52 for two at the end of the Powerplay. Chase, however, got him out as soon as the field restrictions were lifted.

To his credit, Ramdin vindicated the promotion scoring 46 off 35 balls. His dismissal in the 16th over was the end of Patriots' fight. Sohail Tanvir was out next ball to confirm Patriots' predicament. Cottrell's cameo of unbeaten 26 from 11 balls will only affect the net run-rate which will mean little for Patriots until they put their campaign backon track. For Zouks, Scott Kuggeleijn picked four for 33 in his four overs.

At the toss, both the skippers expected moisture to help the pacers early on. With Patriots opting to bowl first, Cottrell's initial spell became crucial. However, the pitch turned out to be dead with absolutely nothing for the pacers. Cottrell was smashed for 23 runs in his first two overs, Tanvir failed to strike as well and Zouks had a happy-go-lucky start scoring 64 for no loss in their Powerplay. All this despite Rahkeem Cornwall (a strike-rate of 180.9 in the first six overs in CPL since 2019)  walking off the ground due to unknown reasons.

Andre Fletcher feasted on Patriots' awry beginning scoring 36 off 20 balls during the Powerplay being the major contributor in Zouks's powerful start. He was helped by Mark Deyal who began his innings with a six and scored 30 off 17 balls batting at three.

Both of them were dropped in John-Russ Jagessar's first over of the day - fourth of the innings. Dunk dropped Mark Deyal at first slip in the first over of the off-spinner, Jon-Russ Jaggesar. The offie missed out on another opportunity to take a wicket when Kieron Powell failed to catch Fletcher cleanly at deep mid-wicket. Powell stepped on the boundary cushion while trying to come back into the field of play after throwing the ball up in the air from beyond the boundary.

Fletcher was dismissed by the same duo at the score of 46 off 33 balls. His dismissal also gave Patriots the breathing space to come back in the game. Tanvir gave them a real chance with a brilliant 15th over taking two wickets - a well-set Najibullah Zadran and Darren Sammy. However, his moment of magic was overriden by Mohamad Nabi's excellence in the end. Fulfilling his role as the finisher, Nabi tonked three sixes and a four in the last two overs. His finishing touch elevated Zouks' total to 172 - the highest in the 2020 Caribbean Premier League season as yet. His assault ended Cottrell's figures at none for 49 in four overs.

Nabi eventually won the man-of-the-match award - his second in a row - adding Lynn's wicket to his contribution in the match. Lynn was caught to a one-handed stunner by Zadran in the third over of the innings.

Before the game, the Patriots were boosted by Tanvir's return to the side who sat out of their previous game due to injury. Overall, Patriots made three changes to their XI while Zouks fielded an unchanged side.

Zouks have now won two out of their three games while Patriots have lost three from three to languish at the last spot in the points table.