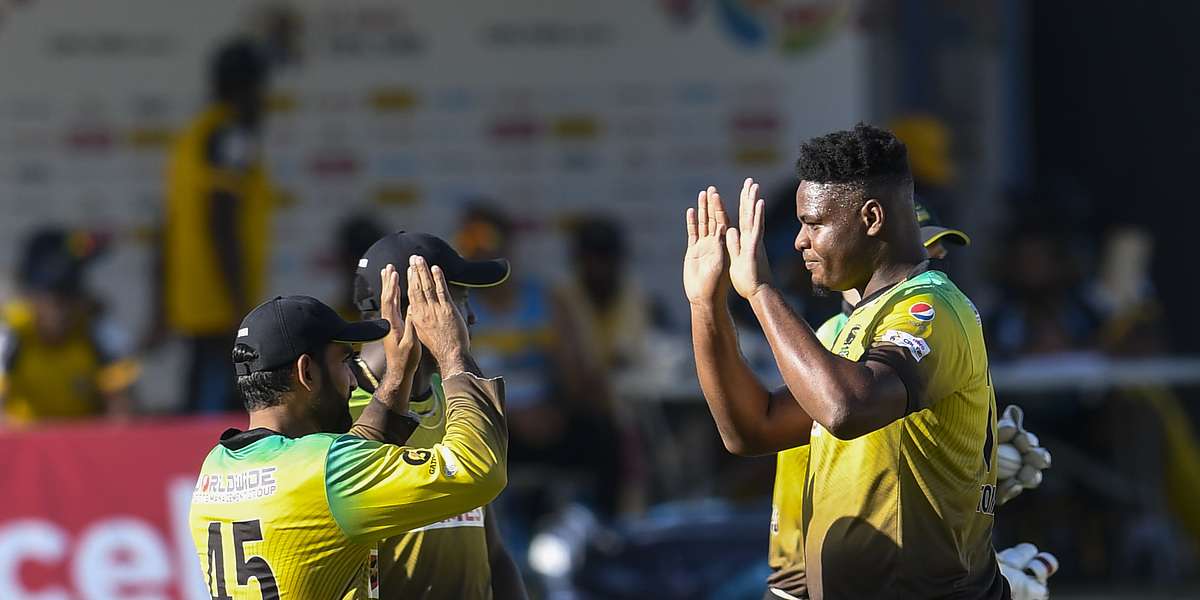 It's not how you start that matters, it's how you finish! Well, Jamaica Tallawahs did manage the complete opposite. They had a golden chance to move a place up to number 3 on the points table. A ploy was stationed. They promoted Andre Russell up the order, got a decent total but a lackadaisical effort saw them lose the game by 7 wickets.

The Zouks are likely to finish third on the points table and will take on the second-placed Guyana Amazon Warriors. The Tallawahs, on the other hand, will have to face the table-toppers and the unbeaten team in the league so far, the Trinbago Knight Riders. Match 30 of the CPL does give the impression of a dead-rubber but it's going to hold huge importance for both teams before the play the all-important semi-finals. 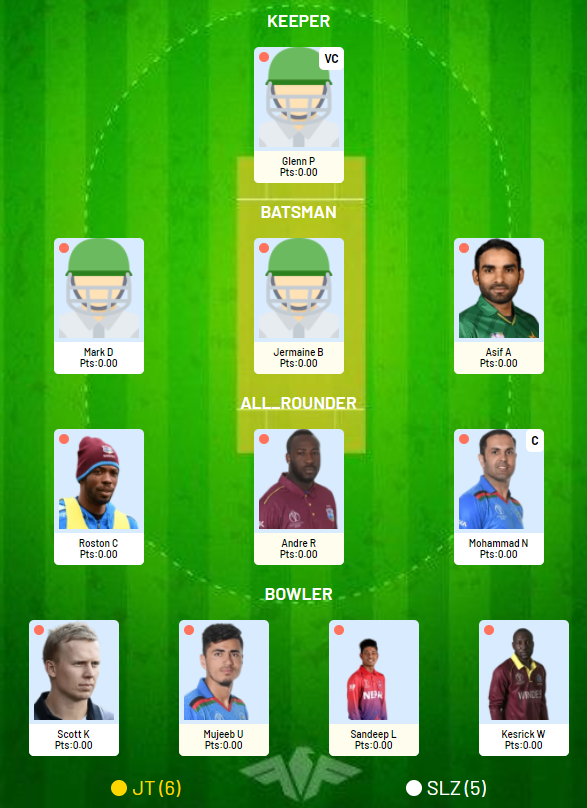 Jamaica Tallawahs lead the head-to-head battle by 9 games to 5. The last time these two teams met the Tallawahs chased down 158 with seven deliveries to spare. Asif Ali, for his 47* off 27 was adjudicated the player of the match.

While you could go for the above team, you also have the option of choosing your team from cricket.com Fantasy Research Centre. Based on algorithms we come up with six different teams that could fetch crucial points. 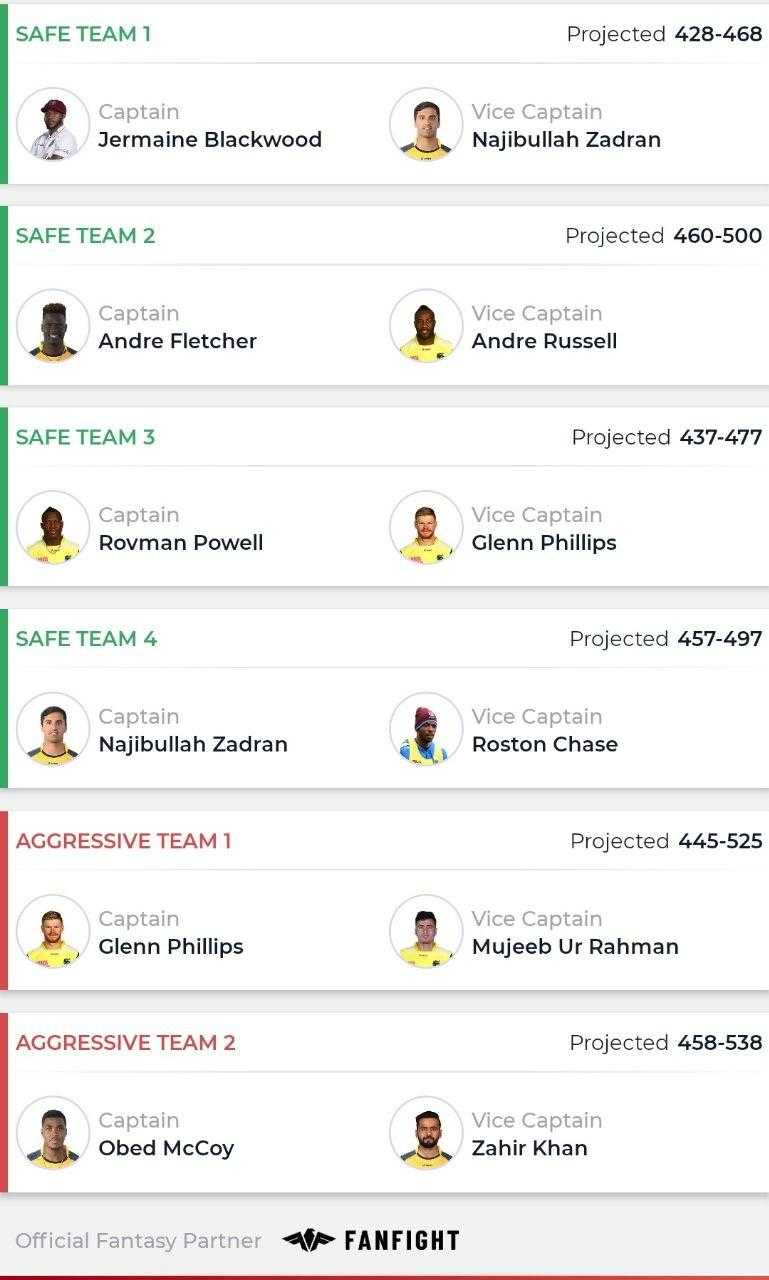 Tarouba has hosted 18 matches this season and the average score batting first is 139. The average second innings total drops down to 131 - an indicator that the pitch slows down as the game progresses. Teams batting first have won 8 matches while teams batting second have chased down targets successfully, 9 times.

At Tarouba, the pacers have picked 102 wickets compared to the 80 by the tweakers. The speedsters have managed to dismiss a batsman every 18.7 deliveries.

The Zouks have won 3 out of the 6 games they’ve played here while the Tallawahs have won only 1 out of 6. As far as run-scoring is concerned, the average runs per wicket at the Tarouba is 24.2 and 21.2 for Tallawahs and Zouks respectively. 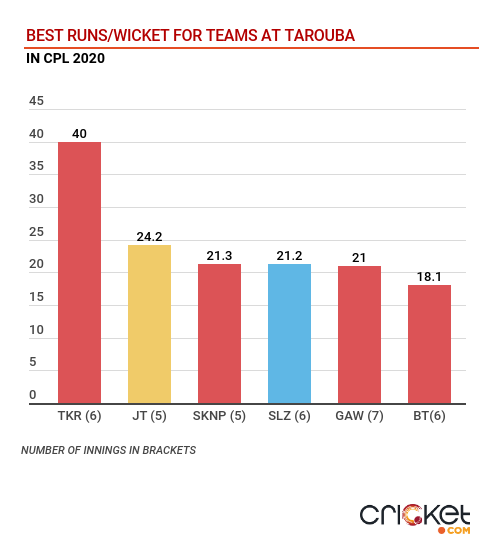 You have a plethora of stars to pick from for this fixture. Scott Kuggeleijn, Mohammad Nabi and Kesrick Williams have been absolute rockstars with the ball. Out of the 56 wickets, the Zouks have picked this season the trio has bagged 36 wickets.

The Zouks defended 92 against the Tridents, got the Patriots out cheaply, but their batting has surely let them down. Roston Chase, their highest run-getter this season features at number 13 on the list of highest run-getters has been their only hope. Nabi, Chase, Kuggeleijn and Williams are the 'heavy-on-wallet' inclusions while Andre Fletcher & Rahkeem Cornwall become your budget buys.

Mujeeb Ur Rahman, Glenn Phillips, Sandeep Lamichhane and Andre Russell will be the obvious choices from the Jamaican corner. Jermain Blackwood after his fine 74 off 59 deliveries could be a positive addition.

There are very few players in the league who can challenge Glenn Phillips’ class. The right-hander has scored 265 runs so far at 37.85. Phillips’ strike-rate versus Williams is a magnificent 166.7 and the opener's knack to nonchalantly smash sixes will make this a feisty battle. 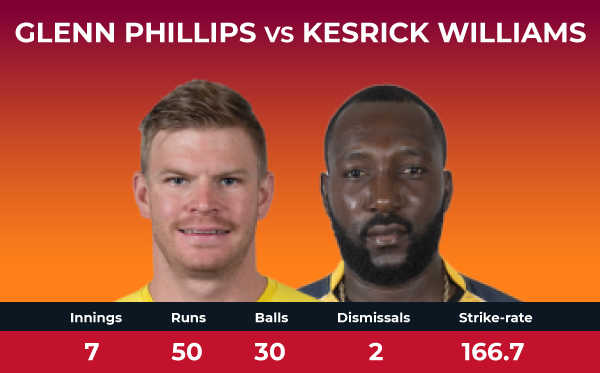 Mohammad Nabi vs Mujeeb Ur Rahman

Nabi vs Mujeeb will also be a battle to look out for. Nabi has succumbed to his Aghani teammate twice but his strike-rate against the leg-spinner is a mind-boggling 216.7 and he scores a boundary every 3.8 deliveries. Mujeeb has gone wicketless in the last three CPL games, but can he get the better of Nabi when the two go head-to-head? 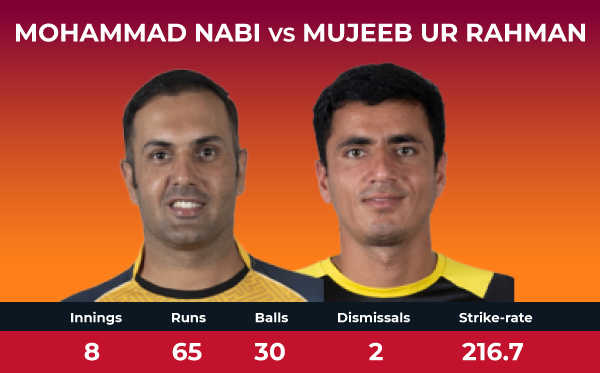 Mohammad Nabi is a match-winner of the highest order. The all-rounder has picked 11 wickets in the league so far and has bagged a wicket every 16.9 deliveries. Nabi has scored 530 fantasy points this season - a compelling reason to make him your fantasy team captain.

Andre Russell was moved up the batting order(number 4) and made an impact straight away with a quick-fire 54 off 28. Russell scores 145.5 runs every hundred deliveries against the off-spinners and his strike-rate against the right-arm pacers in T20s is a colossal 185.5. Watch out Kuggeleijn and Kesrick Williams.

Scott Kuggeleijn’s bowling strike-rate has been the best in the league. He’s dismissed a batter every 12.33 deliveries and is also the second-highest wicket-taker in the CPL 2020 season. The Kiwi pacer has picked 13 of his 14 scalps at the Brian Lara Stadium and is player to watch out for. 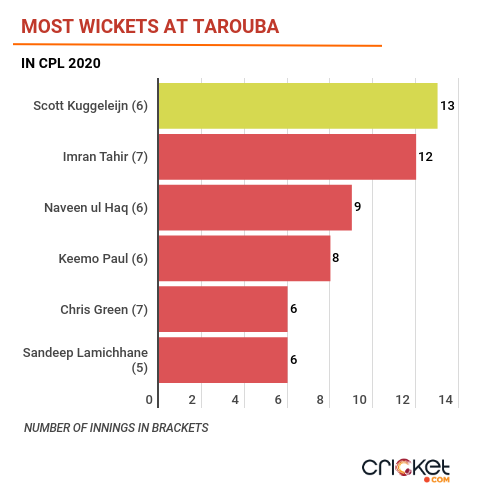 Sandeep Lamichhane: Sandeep Lamichhane has played the best T20 leagues in the world and has only gotten better every year. In CPL this year, the talented tweaker has picked 11 wickets at 14.71 and his balls/wicket ratio is a very sturdy 17.4. Watch out for Lamichhane’s googly. 7 out of his 11 wickets have come off the wrong-un.

Roston Chase: Chase has displayed plenty of class and quality this CPL season. He’s the highest run-getter for the Zouks with 171 runs at 34.20. Chase provides stability and if the Zouks lose early wickets, he’s always there to steady the ship for them. The all-rounder has also done decently with the white kookaburra in hand. 6 scalps at a miserly economy-rate of 5.26 and a balls/wicket ratio of 19. Chase can earn you some crucial fantasy points.