Stats: Australia bundled out for their lowest total at home 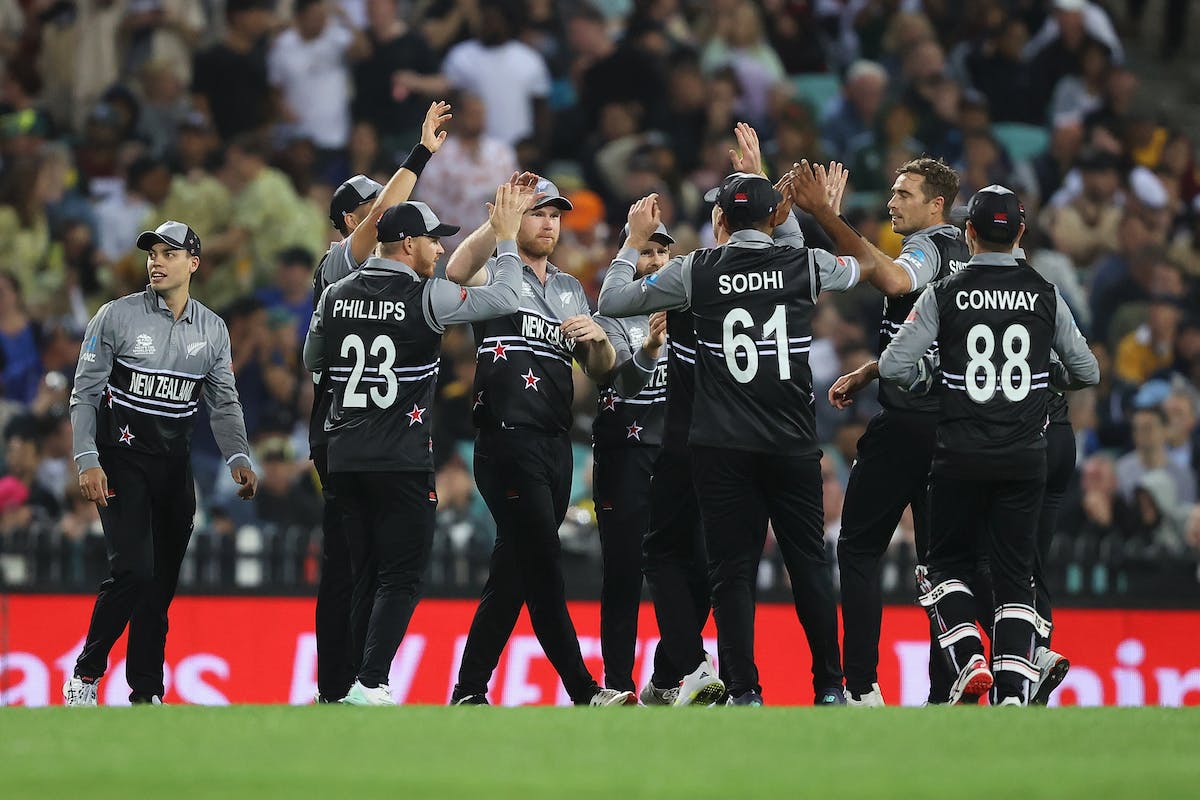 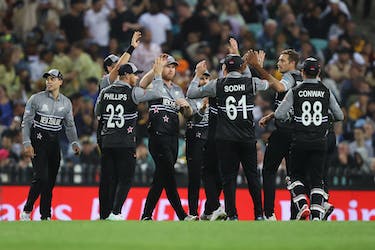 Stats: Australia bundled out for their lowest total at home

Here are a few noteworthy stats from Match 1 of the Super 12 stage of T20 WC 2022, between Australia and New Zealand

The defending champions are off to a horrendous start. Opting to bowl first, their bowlers failed to make an impact and conceded 200 runs. Their batters were under pressure from the start and lost the plot in the first six overs, scoring 37 runs at the expense of three wickets. In the end, all they could manage was 111 before being all-out.

Lowest total for Australia at home

A dismal batting performance for the home team resulted in them succumbing to their lowest total at home. 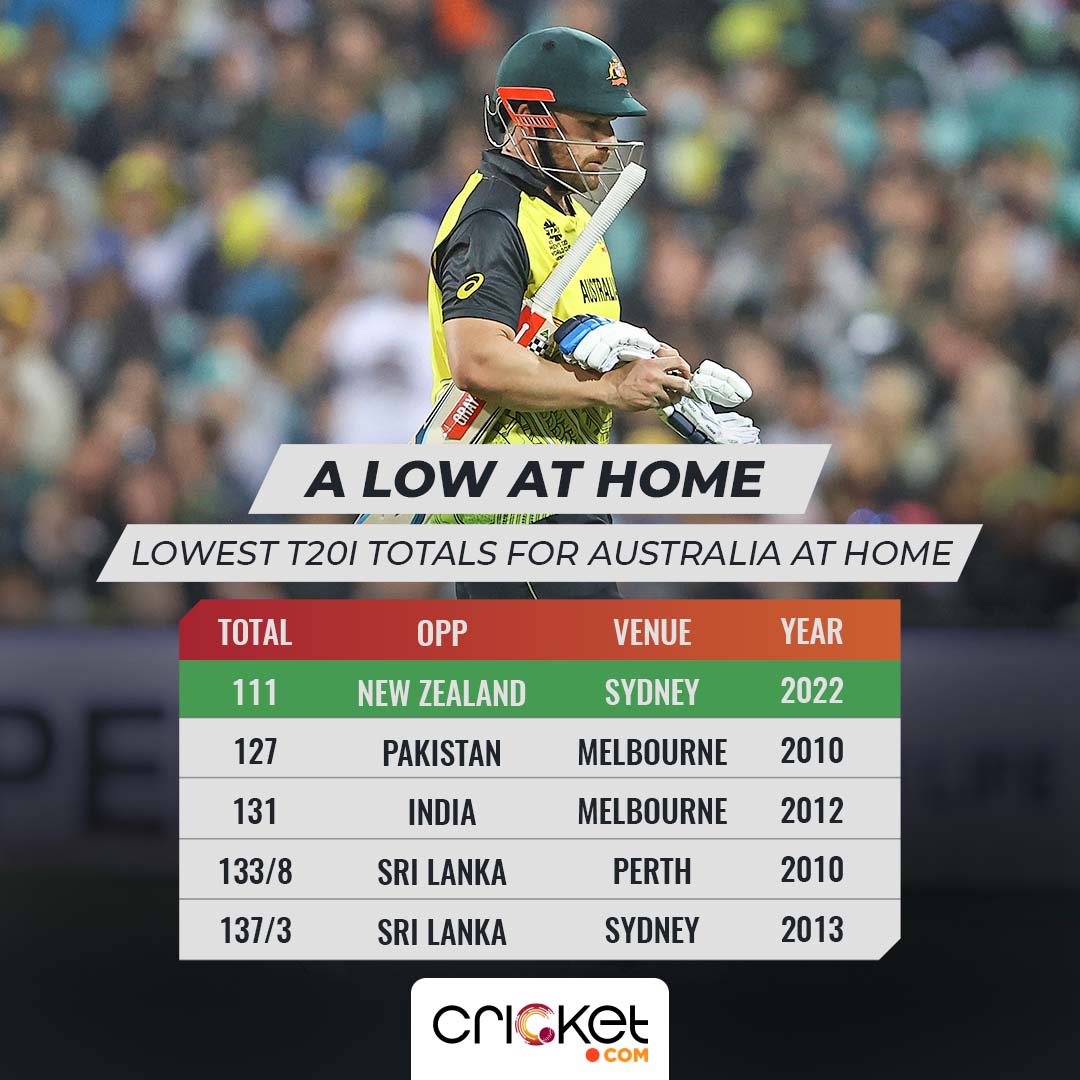 To add to their misery, it is also Australia's second-lowest total in the T20 World Cup. The last time they endured a much lower feat was against India at Mirpur in 2014, when they were all-out for 86. 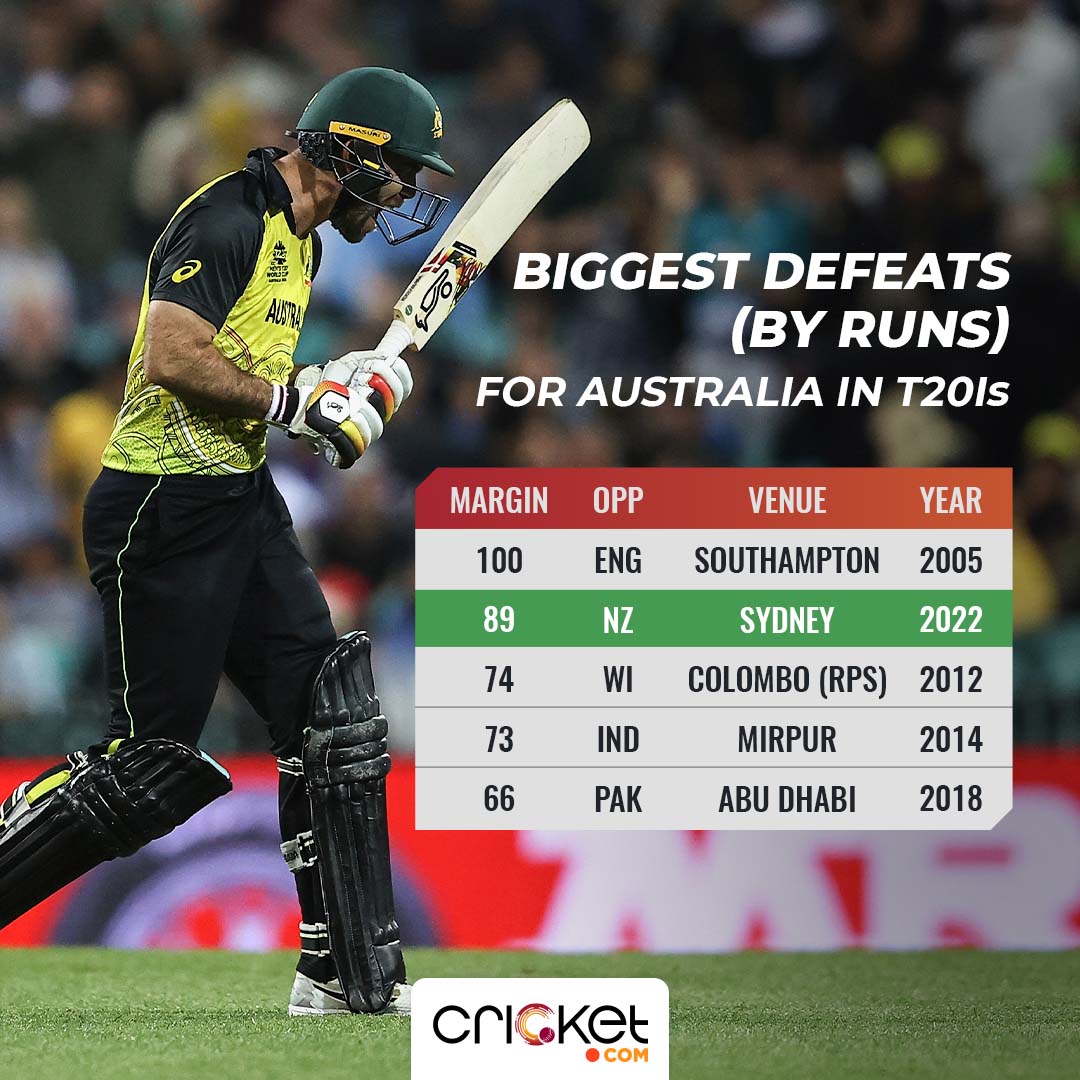 By virtue of their defeat by 89 runs, they suffered their biggest defeat in the T20 World Cup and the second in T20I history. Also, Australia are the second team after West Indies in 2014 and 2021, to lose their first match of the follow-up mega event as defending champions.

The runners-up of the last edition of the extravaganza, New Zealand, dominated the proceedings from the get-go, courtesy of a blazing knock from Finn Allen of 42 runs in 16 deliveries. His heroics in the first half of the powerplay helped New Zealand amass 65 runs, which is the best for them in the T20 World Cup (complete 20-over match).

En route to his destructive knock, he also registered the most runs by a Black Caps batter in the field restrictions of a T20 WC match. Previously, Aaron Redmond in 2009 against Ireland, had scored 40. Adding on, his strike rate of 262.5 in the first six overs was the best for any NZ batter who had played 10+ balls in a T20 WC innings.

Devon Conway produced one of his best knocks in the shortest format, scoring an unbeaten 92 off 58 deliveries to propel them to a formidable first-innings total. In this innings, Conway became the seventh New Zealand batter to score 1000 runs in the format. By reaching the landmark in just 26 innings, Conway is the joint second-fastest in T20Is to achieve the feat. 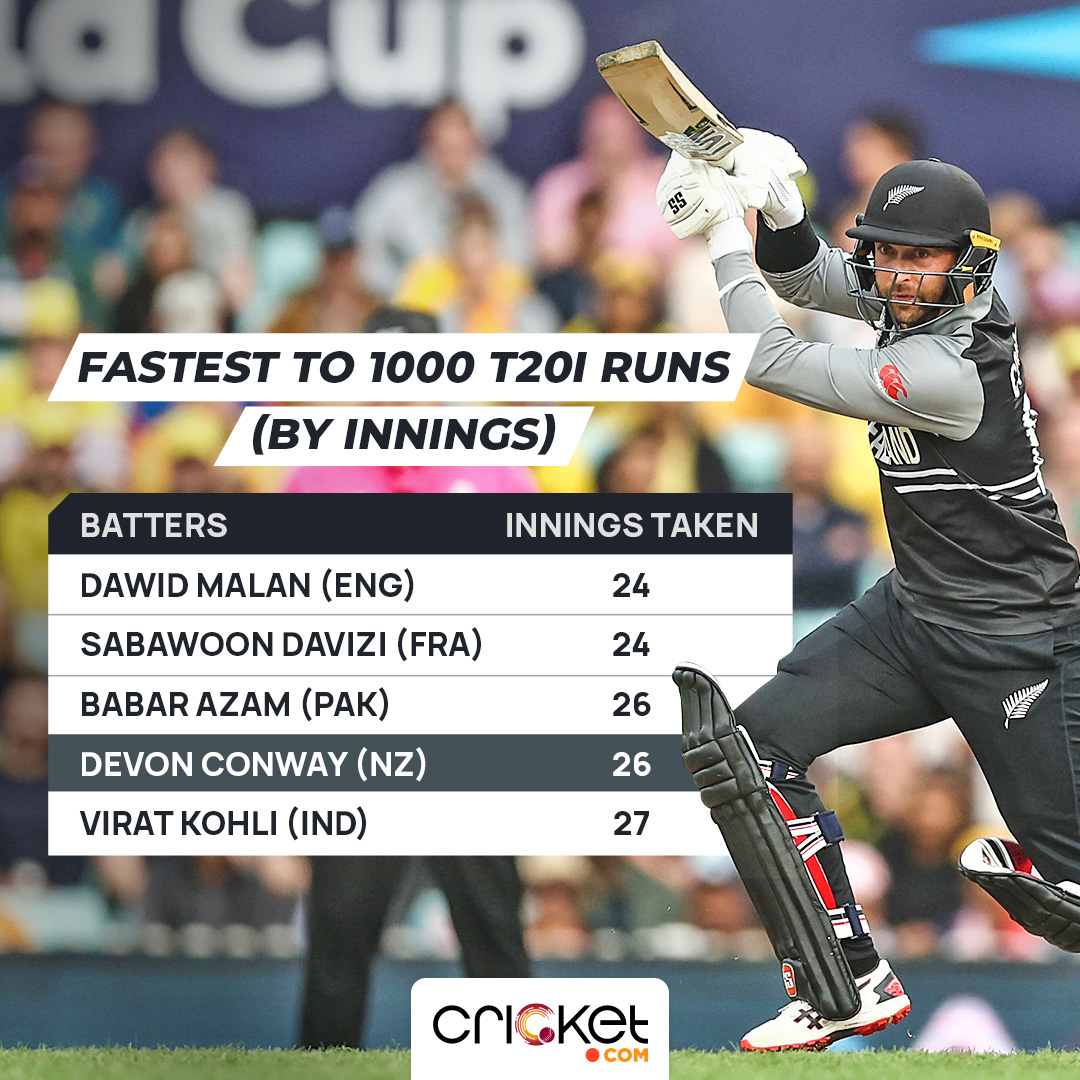 His knock of 92* is the third-best score by a New Zealand batter in T20 World Cups, with Brendon McCullum's 123 against Bangladesh in 2012 and Martin Guptill's 93 versus Scotland in 2021 being the other top two.

The 31-year-old also recorded the second-highest score against Australia in the World Cups, with only Umar Akmal scoring 94 at Mirpur in 2014.

With contributions from the top order, New Zealand breached yet another record in T20 World Cups. Their total of 200 for the loss of three wickets is their highest total in the history of the tournament. 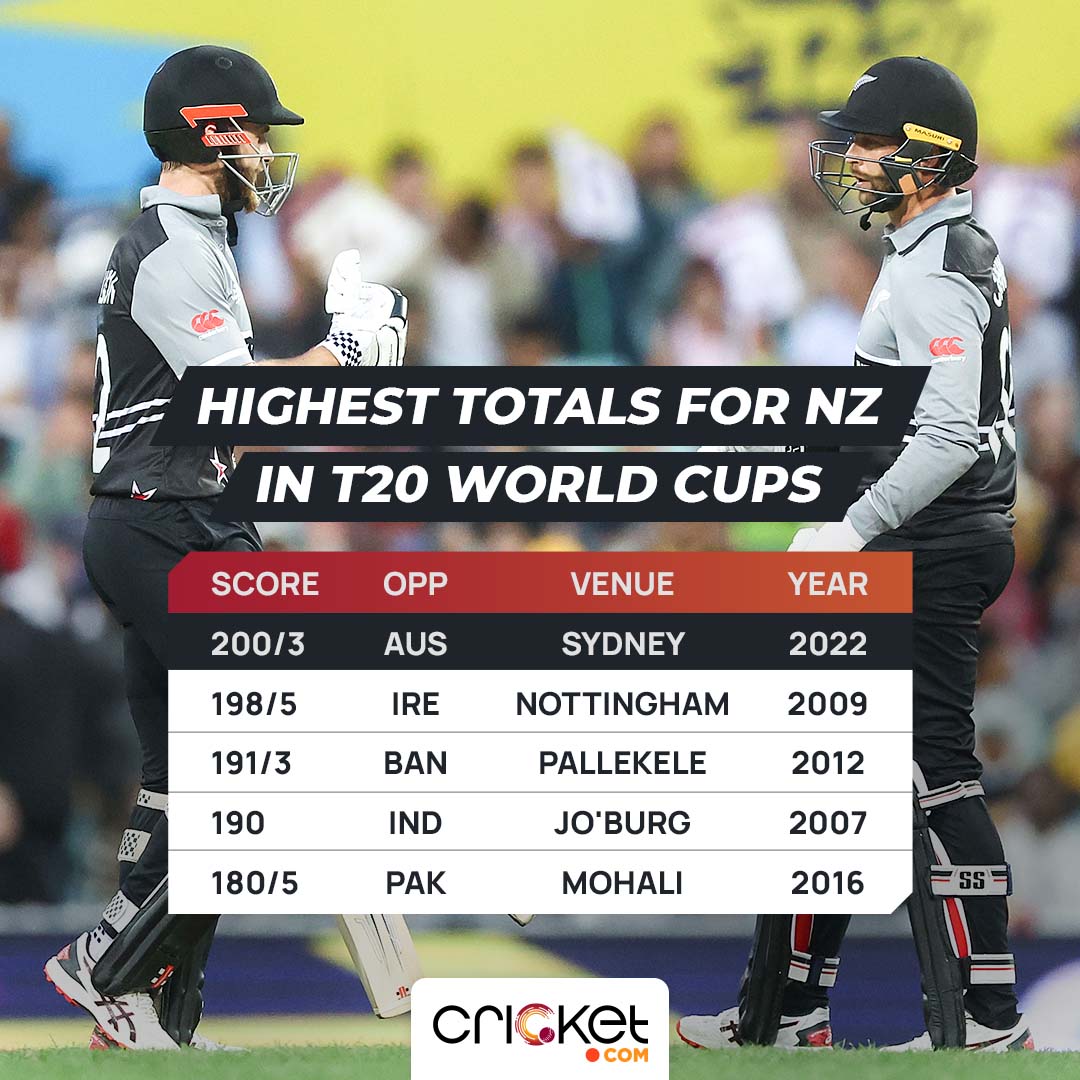 The last time they posted a mammoth title on the board in the competition was against Ireland back in 2009, when they posted 198 for five in Nottingham.

Not a Mitchell Starc start

Australia were hoping for their premier bowler, Mitchell Starc, to rattle New Zealand in overcast conditions after opting to field first. However, they were in for a massive shock as the left-arm pacer was taken to the cleaners in the first six deliveries of the innings.

While the first ball was defended well, Allen smashed the next two deliveries over mid-on for a boundary and six to score 10 off the first three deliveries.

He followed it up with a boundary straight behind the bowler's head to amass 14 runs, which is the most runs conceded by an Aussie batter in an opening over of the innings in a T20 World Cup. This is also the second time in a month that Starc has leaked 14 in his first over, the first one being against West Indies at home in the first T20I.

Australia have never been a happy hunting ground for New Zealand in the last decade. Post their win in the 2011 Hobart Test, the Kiwi outfit had failed to register a win across formats in Aussie land. Prior to this match, in 15 matches, they had 14 losses and one draw. However, after 10 years, they have finally managed to break the jinx.