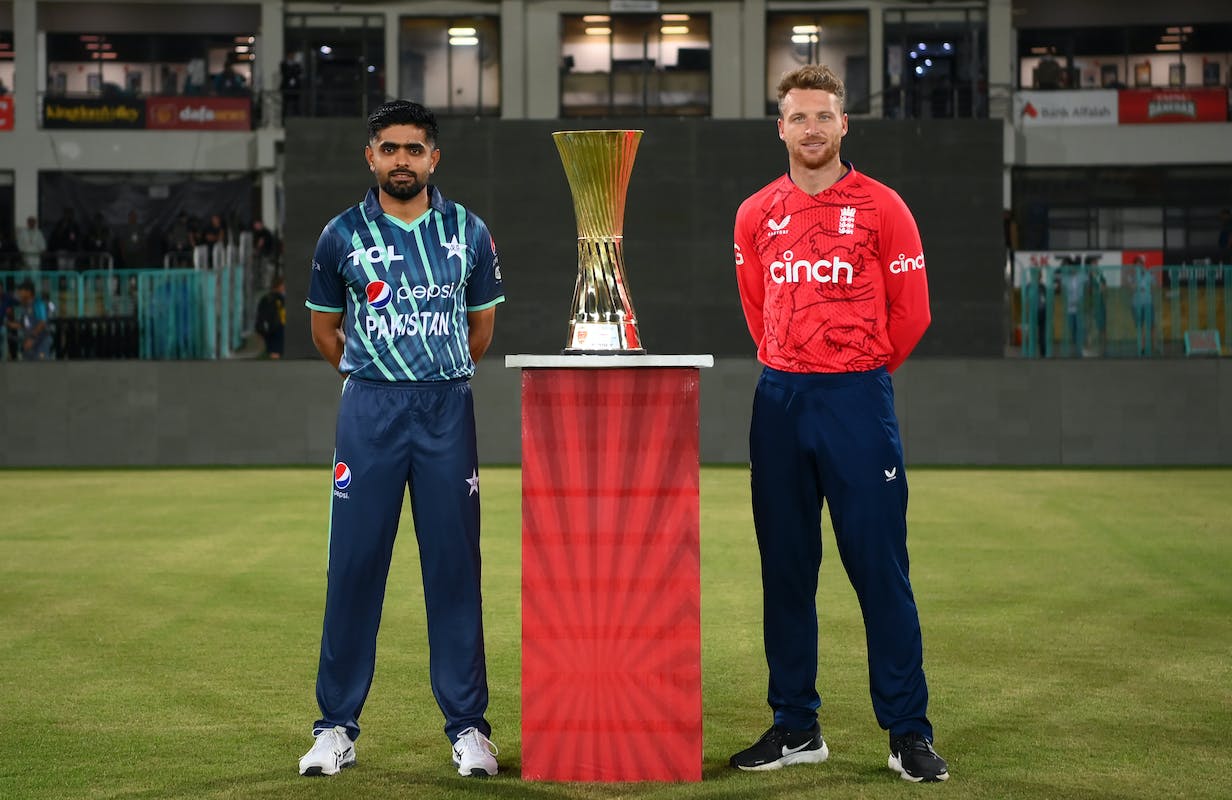 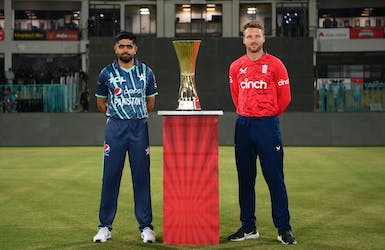 A statistical preview for the seven-match bilateral series between Pakistan and England in Pakistan, starting 20th September

In 2021, around the same time, England's both men's and women’s team were scheduled for a tour of Pakistan. However, after New Zealand pulled out from their tour at the last moment, England also called off their series. However, honouring their agreement, they decided to make a tour a year later, making it their first tour of Pakistan in 17 years.

The first four matches of the seven-match series are set to be played in Karachi. The second leg of the series will be hosted in Lahore.

Here is a statistical preview for the T20I series:

A series after a long gap

Following an unforeseen circumstance in 2009, cricket in Pakistan came to a massive halt. However, Zimbabwe, in 2015, were the first team to tour Pakistan in six years. Post 2017, gradually teams started to tour the country. Sri Lanka in 2017, West Indies in 2018, Bangladesh in 2019, South Africa in 2021, and lastly, Australia toured in 2022.

After 17 years, England will be playing an international series in Pakistan. The last time England toured Pakistan was in 2005 for a three-match Test and five-match ODI series.

The first ever seven-match bilateral series

England and Pakistan are making up for the long gap by playing the longest-ever bilateral T20I series consisting of two full member nations.

Generally, when the Test playing nations play a bilateral series, it is either a three-match series or a five-match series. For the first time, a seven-match T20I series will be played between two full member nations. Overall in T20Is, only once a seven-match series has been played. Mozambique in 2019, toured Malawi.

In T20Is, Pakistan have been a formidable force in Asian conditions. In 103 matches, they have won 67 with a win percentage of 65. They have played at least one match against 15 opponents, including ICC XI, and only against three opponents their win percentage is less than 50 percent.

Among the three, England have been their worst nemesis. In eight T20Is in Asia, Pakistan have won only two matches against England. Their win percentage of 25 is their worst against an opponent in Asia. In these eight matches, their batters have averaged 17.4 (excluding extras). Only against South Africa, the average is lower (16.1).

Pakistan yet to win a multi-match bilateral series against England 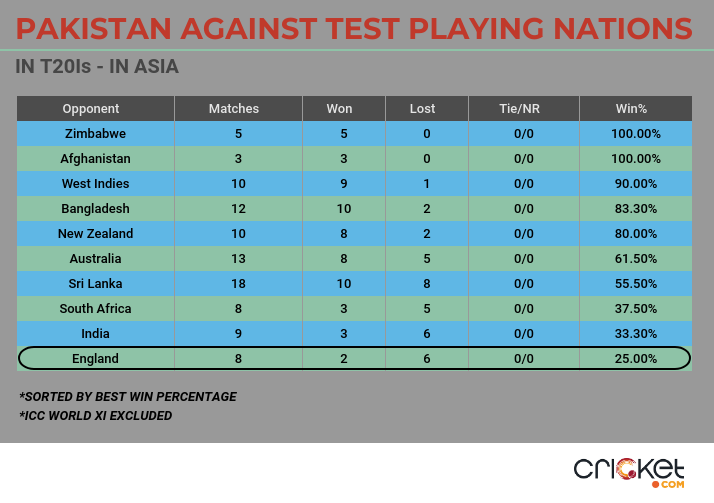 In the six bilateral series that has involved two or more matches, Pakistan have lost four and drawn twice. England have played three T20I series against Pakistan in Asia and have won twice and drawn once.

Despite a poor record against England in Asia, Pakistan will take confidence from the fact that they haven’t lost a T20I game in Karachi.

At the National Stadium, Pakistan have played seven games and have won all seven. Among full member nations who have played five-plus matches at a venue, Afghanistan at Rajiv Gandhi Stadium, Dehradun, is the only other team to win all the matches played at a particular venue (6 matches). India in Durban, have played five matches out of which, they have won four and one ended in no-result.

England’s troubles while chasing in 2022

Though England are deemed as one of the batting heavy teams, they have succumbed to the pressure while chasing in recent times. The chain of defeats while chasing, started from the 2021 World Cup. In their last match of the group stage, they lost to South Africa while chasing 190. Post that, England haven’t won a single game chasing. In this year, they have played 11 matches and have batted first five times and have gone on to win four. In the remaining six that they have chased, all have been losses.

However, he has hit a rock bottom this year. In six innings, Buttler has scored 87 runs at an average of 14.5 without a 30+ score. In a year in which he has batted five-plus innings, this is the worst he has averaged. From best to the worst, the last two years have seen it all. 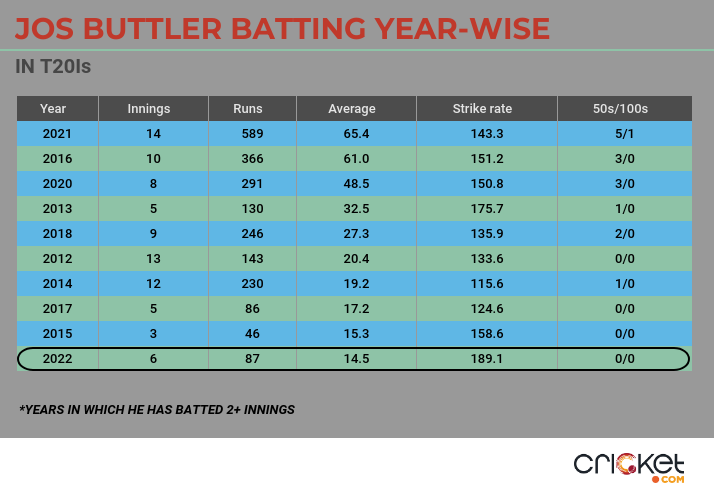 Adding salt to the wound, his numbers against Pakistan in the shortest format isn’t encouraging. In eight innings against them, he averages 18.5, the lowest against an opponent (3+ innings). Adding more, on English soil, he averages 32 in three innings as compared to 10.4 in Asian conditions (five innings). Already struggling to find form, Buttler has a huge task ahead of him.

Amidst his poor run of form in T20Is, there is a bright spot in Buttler’s batting. In all T20s this year, Buttler has been tremendous against the spinners. Most of it was in the 2022 edition of the IPL.

In the year 2022, Buttler has an average of 90.3 and a strike rate of 156.7 against spinners. He has hit a boundary every 5.1 balls. In terms of average and balls/boundary ratio, the year 2022, has been his best. In this edition of the IPL, Buttler was dismissed only once against spinners in 13 innings and had a strike rate of 153.8. Irrespective of the form, these are some handy numbers especially when playing against Pakistan in their backyard.

Pakistan skipper Babar Azam had a forgettable Asia Cup 2022. He scored only 68 runs six innings at an average of 11.3, his second worst series in T20Is.

In fact, post the 2021 WC, Babar played two multi-match series. Against Bangladesh (away), he scored only 27 runs in three innings at an average of 9.0 and against West Indies at home, he scored 86 runs at an average of 28.7. In the only T20I against Australia, he scored 66. In total, Babar has averaged 19 in 13 innings post the WC.