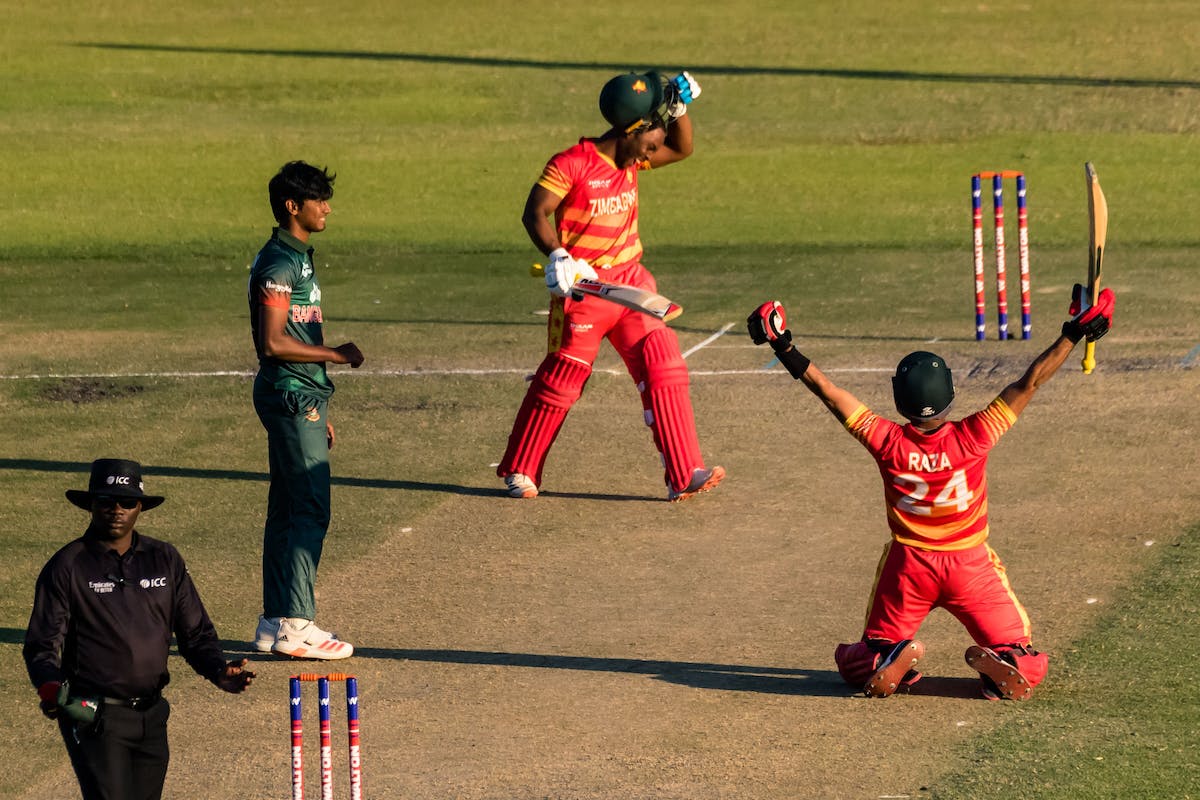 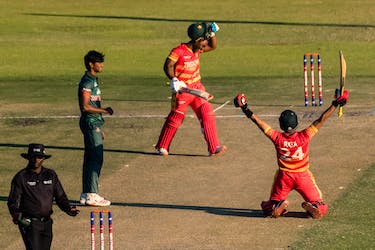 After winning their first T20I bilateral series against a full member nation, Zimbabwe, on the back of Sikandar Raza’s purple patch, went on to win the ODI series as well. This was their first ODI series win against a full member nation since 2017 against Sri Lanka. Raza, with back-to-back centuries, guided Zimbabwe to a 300+ chase in the first ODI and 290+ in the second. Bangladesh settled for a consolation win in the third and avoided a white-wash.

Baring his duck in the third ODI, Raza was stupendous throughout the white-ball tour. Even in the T20I series, he scored two half-centuries (65* in the first and 62 in the second T20I) and then suffered a duck in the third. En route to his two century knocks, Raza set plenty of records:

-Raza became the second batter after Kevin Pietersen (3) against South Africa in 2005 to score multiple centuries in a bilateral series batting five or lower.

-Overall, in any series (bilateral or multi-nation), he is the only one to hit multiple centuries, batting five or lower while chasing in a series.

-His 252 runs in this series are the most for a number five or lower batsman in a three-match bilateral ODI series. 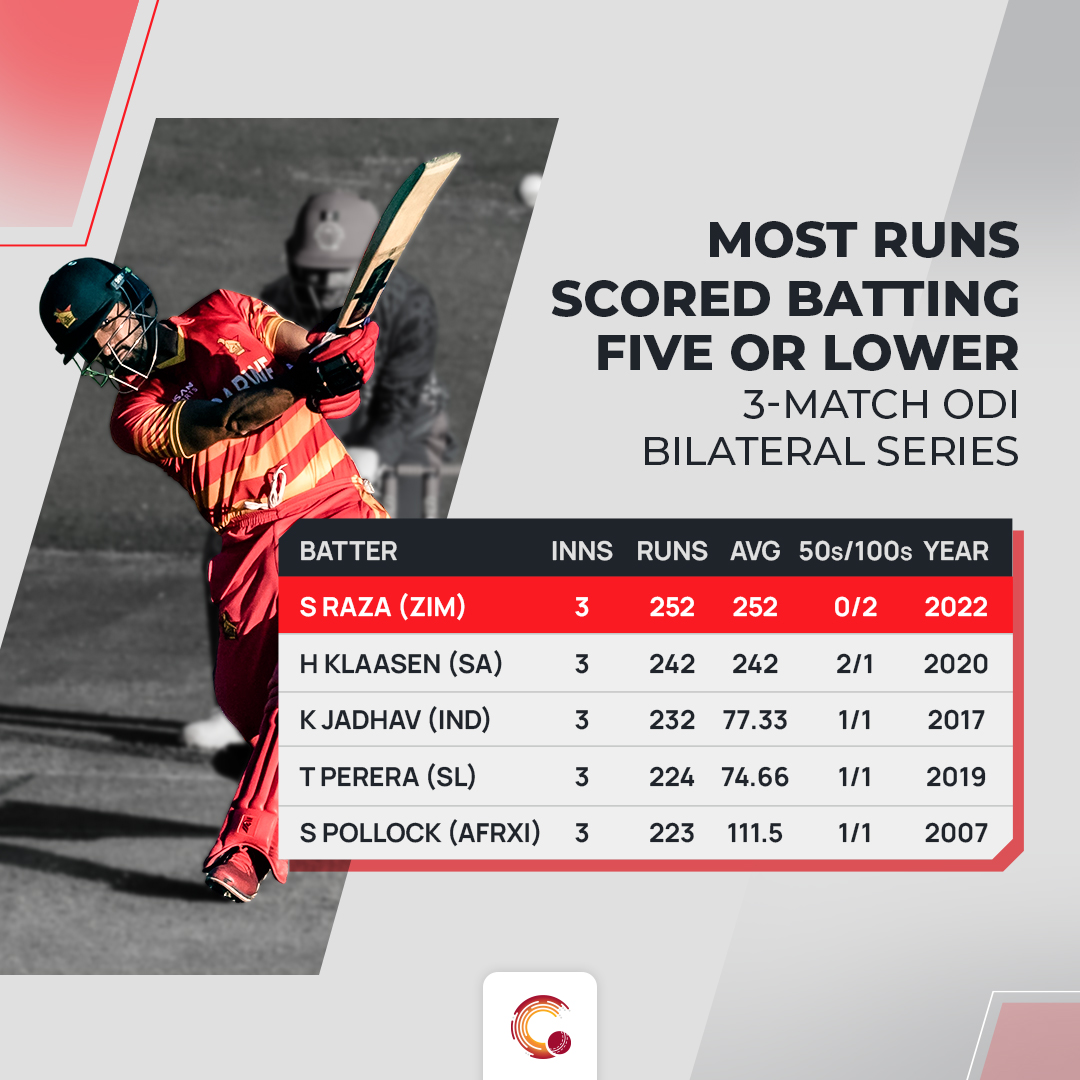 -Raza became the third Zimbabwean batter to hit two or more centuries in a bilateral series. Hamilton Masakadza against Kenya in 2009 and Brendon Taylor against New Zealand in 2011 are the other two.

-In this ODI series, Raza picked up five wickets to go with his 252 runs. By virtue of it, he became the only player to score 250+ runs and pick up five wickets in a 3-match bilateral series.

In both the ODIs, Zimbabwe chased in excess of 290 to win the series. In a bilateral series, this is the sixth time they have scored in excess of 290+ in multiple innings. To emboss more, both came in a chase, making it the first instance for them.

Four centuries in a series

Leading from the front, Raza scored two centuries in this series and Innocent Kaia in the second ODI and Regis Chakabva in the third ODI, added to the tally and took it to four centuries. In an ODI series, for the first time, Zimbabwe had four centuries with three different batters approaching the milestone.

The only longer streak of series wins they had was from November 2014 to September 2016. In this time span, they had won six consecutive series.

Bangladesh lost only two wickets while posting a total of 303 in the first ODI. Only West Indies against South Africa in 2004 had a higher score (304) in a losing cause after losing only two wickets (entire 50-overs).

This was only the second innings in which all the top four Bangladeshi batters scored a 50+. The other one came against Pakistan in Mirpur in 2014.

The unbeaten knock of 135 by Raza was the highest score by a number five or lower batter in a successful chase in ODIs. 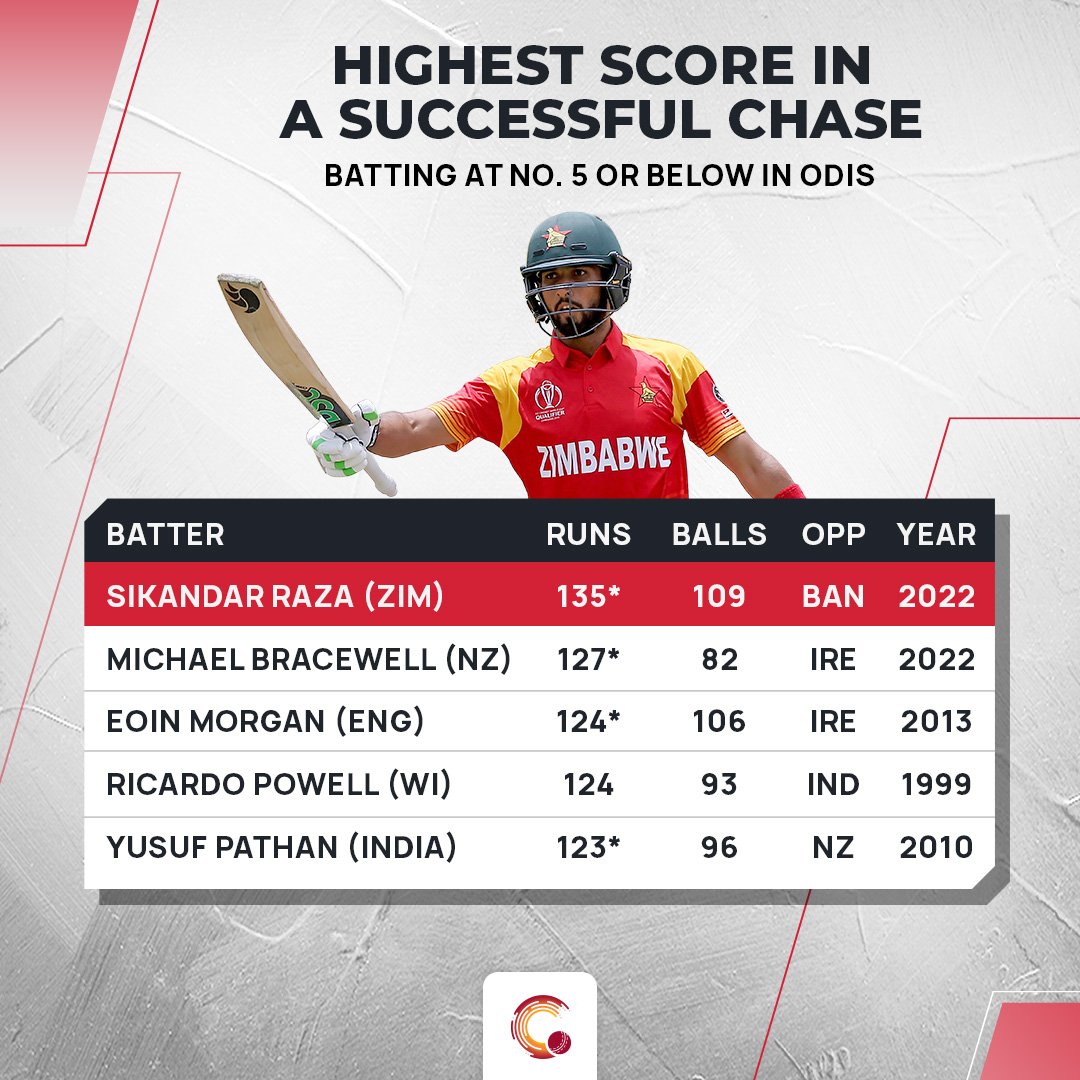 In the 27th over of the first innings, Tamim Iqbal became the first Bangladeshi batsman to score 8000 ODI runs.

The fifth wicket partnership between Raza and Chakabva of 201 was only the third double century stand for Zimbabwe in ODIs. Masakadza and Raza against Afghanistan in 2014, had put on 224, the highest, and Carlisle and Ervine against India in 2004, had hoisted 202. 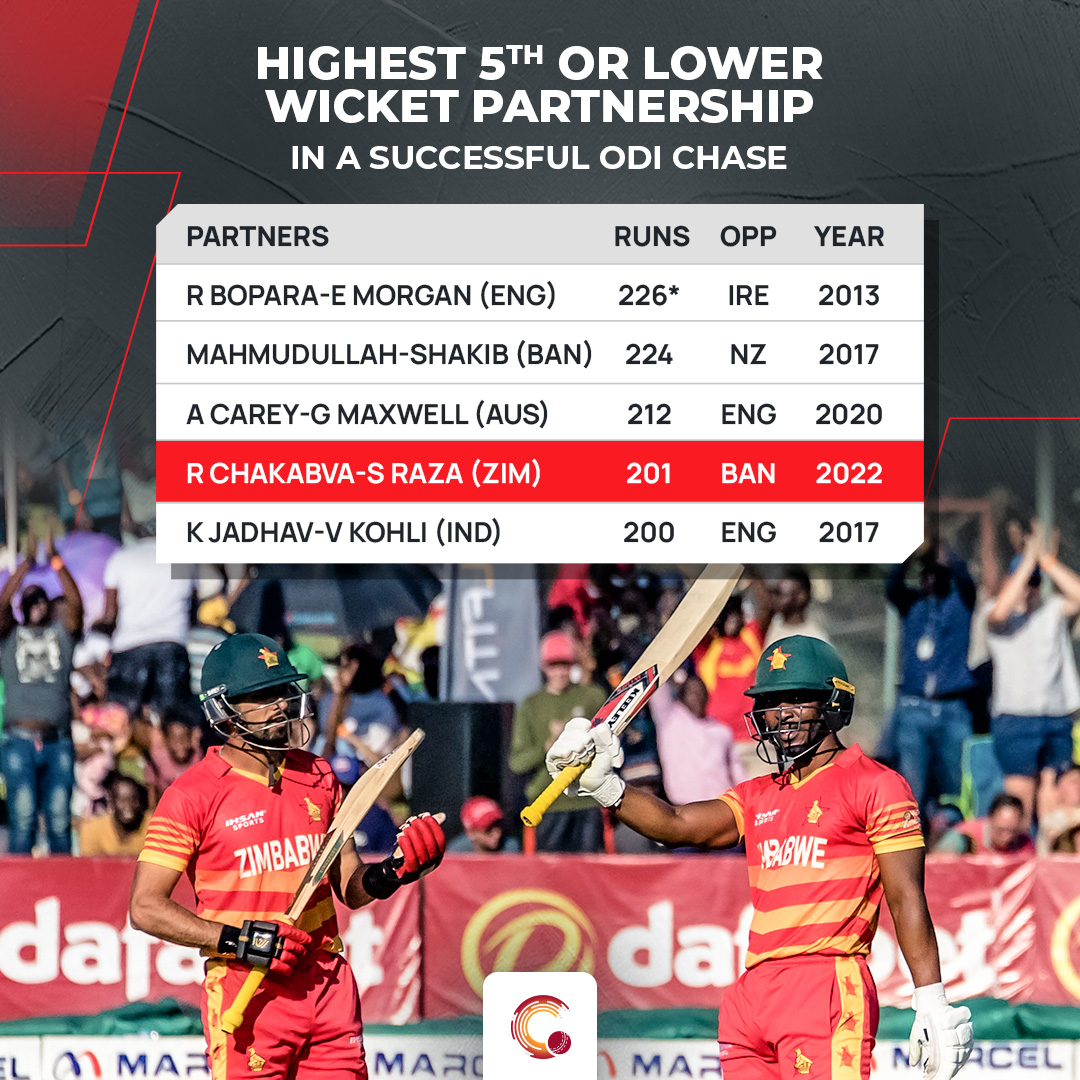 Overall, this was only the fifth innings in which a fifth or lower wicket pair had posted 200+ partnership runs in a successful chase in ODIs

The pair of Raza (117*) and Chakabva (102) added to the list of two centurions in an innings for Zimbabwe. Now, they have three pairs to have achieved this feat. 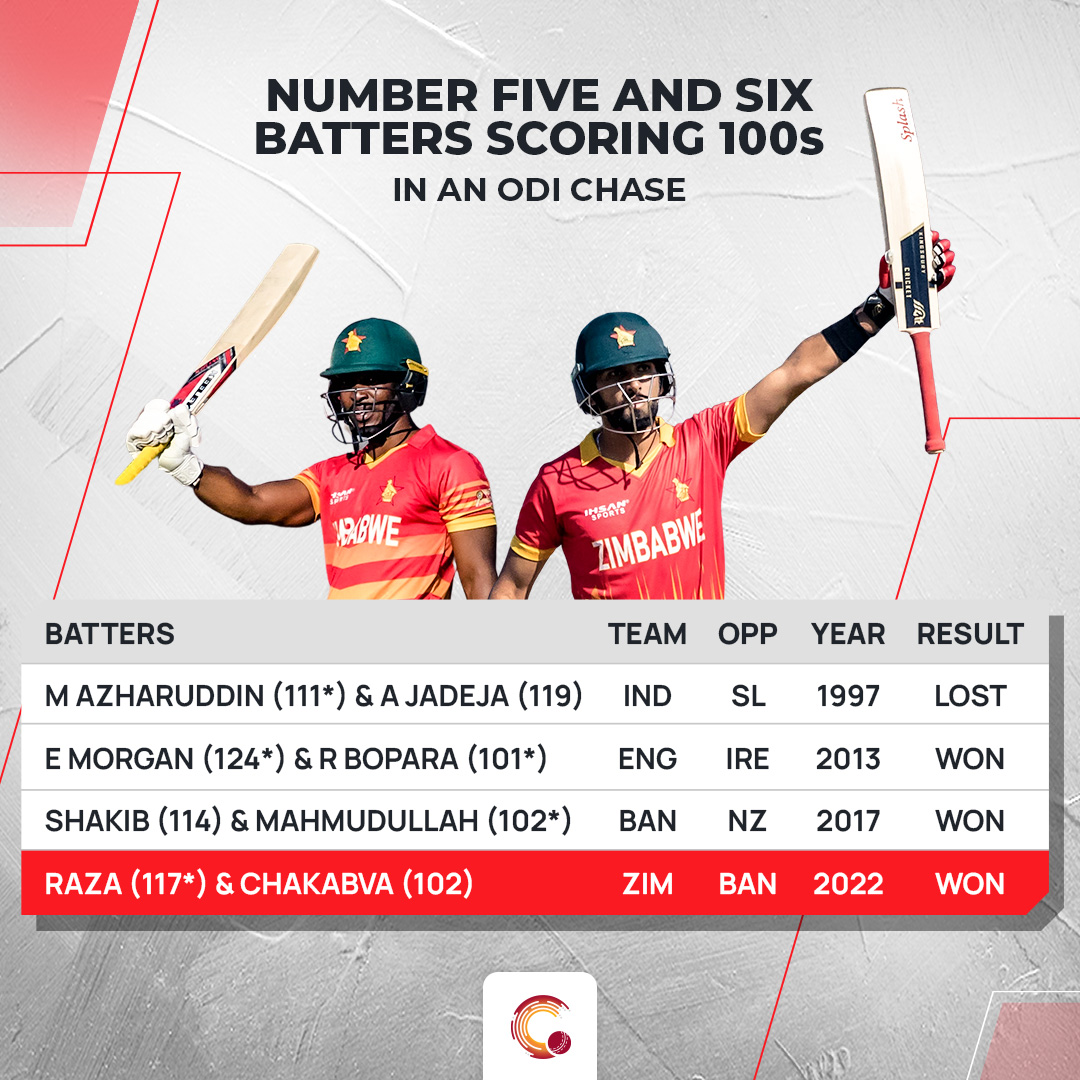 The pair of Raza and Chakabva were the fourth pair to hit centuries at number five and six in the same innings while chasing. In a successful chase, they were only the third.

Mushfiqur Rahim suffered his first ODI duck since April 2017. Before this innings, he had played 66 innings without one, which is the longest streak of innings without a duck for a Bangladesh batter.

Zimbabwe’s 10-wicket pair hoisted a 68-run partnership, which is the highest for them in ODIs. Previously, Shingi Masakadza and Ian Nicolson 2010 against Ireland had posted 60.