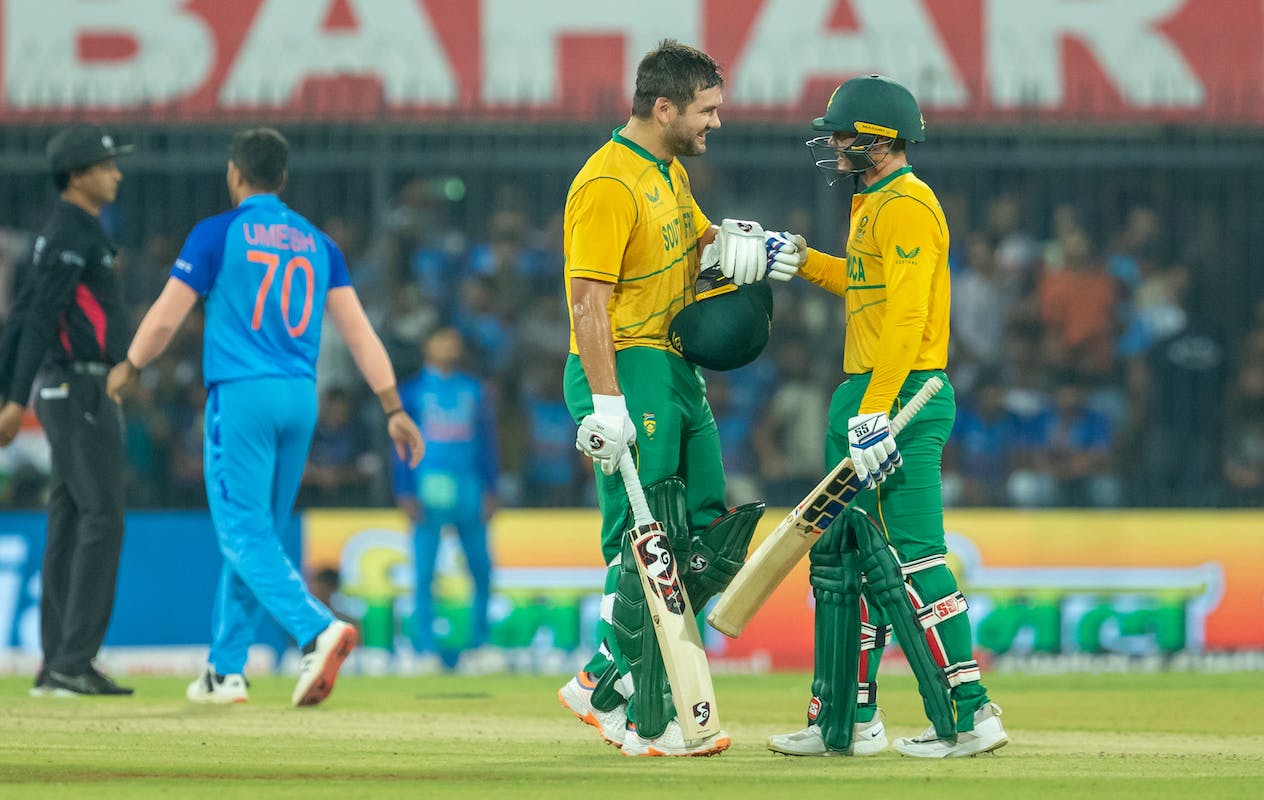 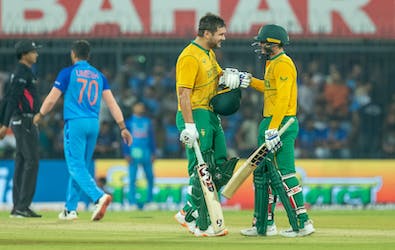 After a dull start in the first T20I, the last two turned out to be a runs fest. Thanks to a century from Rilee Rossouw, and a blazing half-century by Quinton de Kock, South Africa posted a mammoth total of 227/3.

In reply, India lost by 49 runs, but their approach was commendable. Despite losing wickets at regular intervals, Indian batters kept on charging. Though they were bundled out for 178, they scored at a run rate of 9.6.

In his first two innings this series, Rossouw suffered a first ball duck and a second ball duck. But, in the third T20I, he bounced back with a sensational century.

In T20Is, this was his maiden century. He became the fifth South African batsman to hit a century in this format. Against India, he is the sixth to achieve this feat. Overall in T20s, this was Rossouw’s fourth century, out of which three have come in Asian conditions. Interestingly, in all three, he remained not out on 100.

With an unbeaten 69 in the previous game, de Kock went past JP Duminy’s tally of 1934 runs to become the second highest run scorer for South Africa. 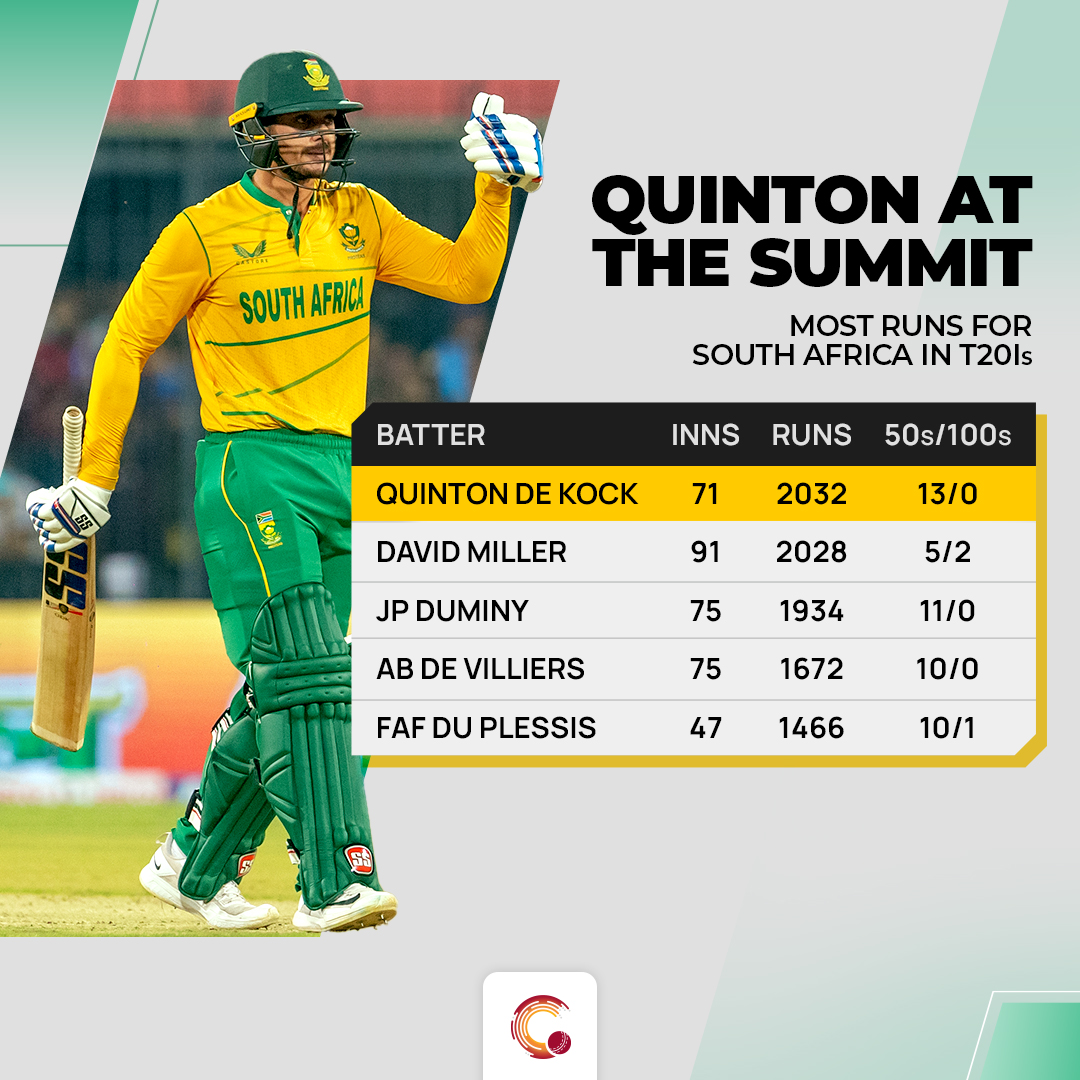 In this match, with another half-century (68), he became the second Proteas batsman after David Miller in the previous game, to score 2k runs in this format. He even surpassed Miller’s tally and became the most successful batter in this match. Only four runs separate the top two run scorers of South Africa.

Adding more, this was de Kock’s fifth 50+ score in India in T20Is, which is the most by a visiting batsman. Nicholas Pooran has hit four 50+ scores in seven innings.

Another high against India 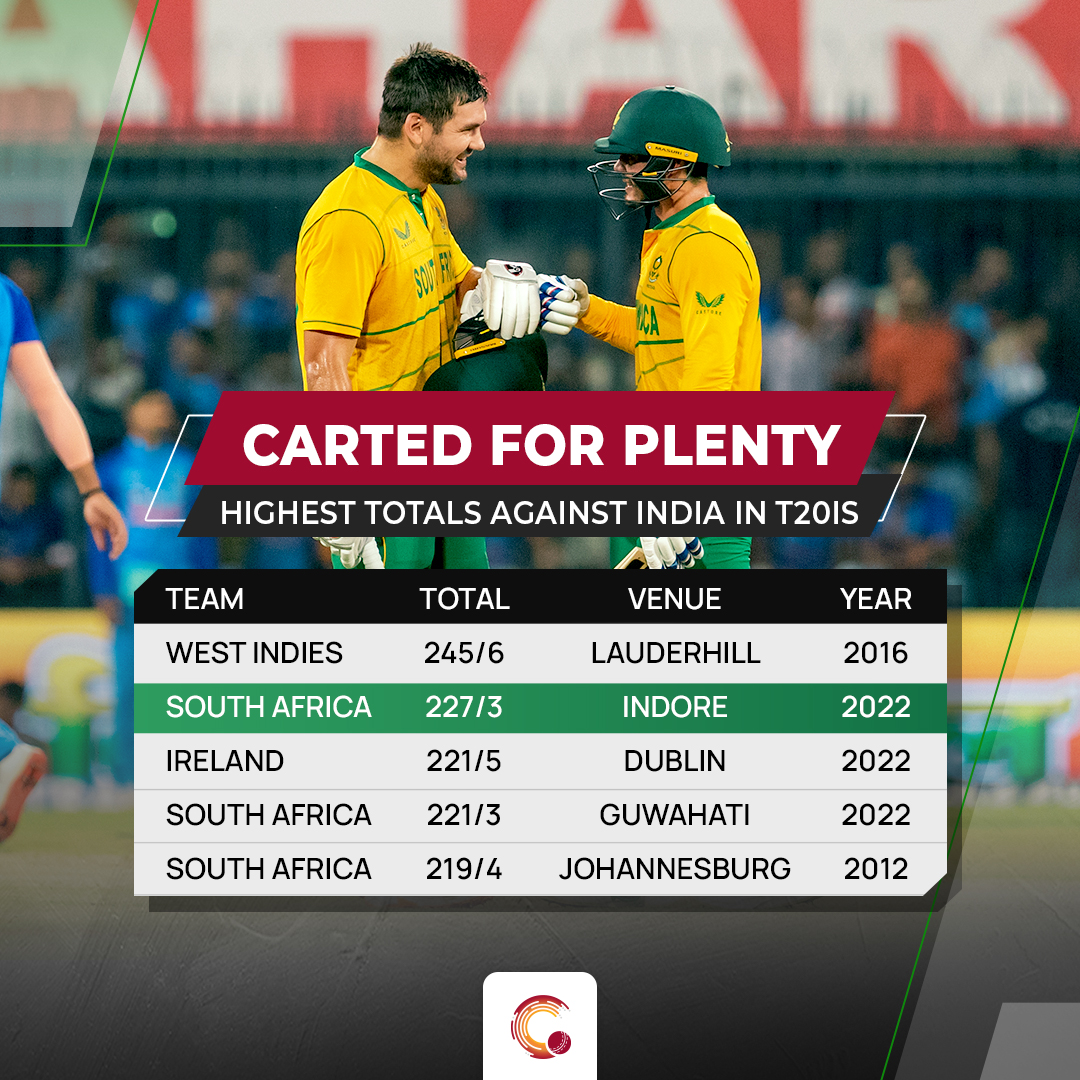 In this innings, South Africa smashed 16 sixes, which is the second most for them in a T20I innings. Only against England in 2009, they had smashed more sixes. 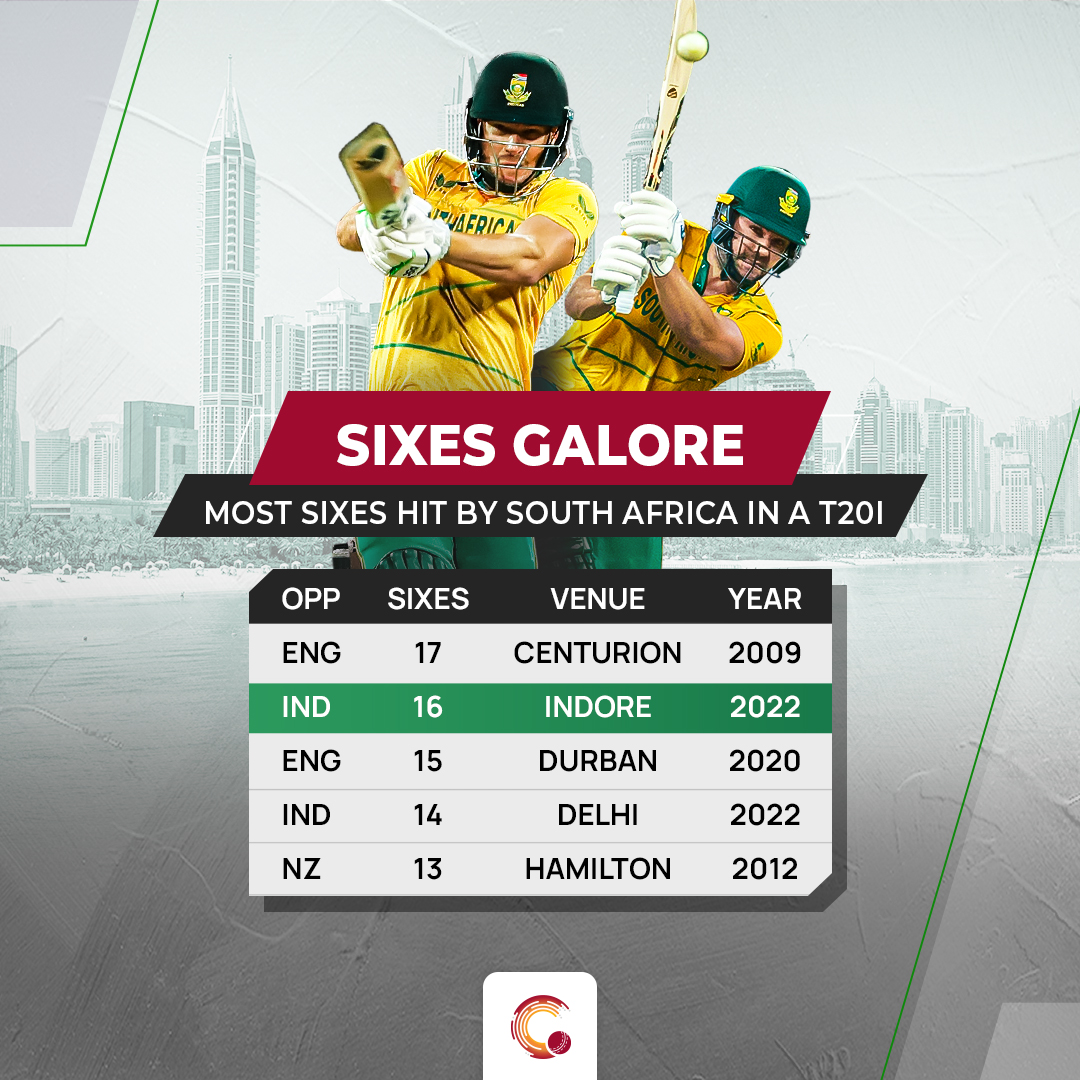 Another worrying record under Harshal’s name

Earlier in the Australia series, Harshal Patel recorded 33rd six in the year 2022. By virtue of it, he had the most sixes conceded by a bowler in a calendar year in T20Is. In total, he has conceded 38 sixes this year. 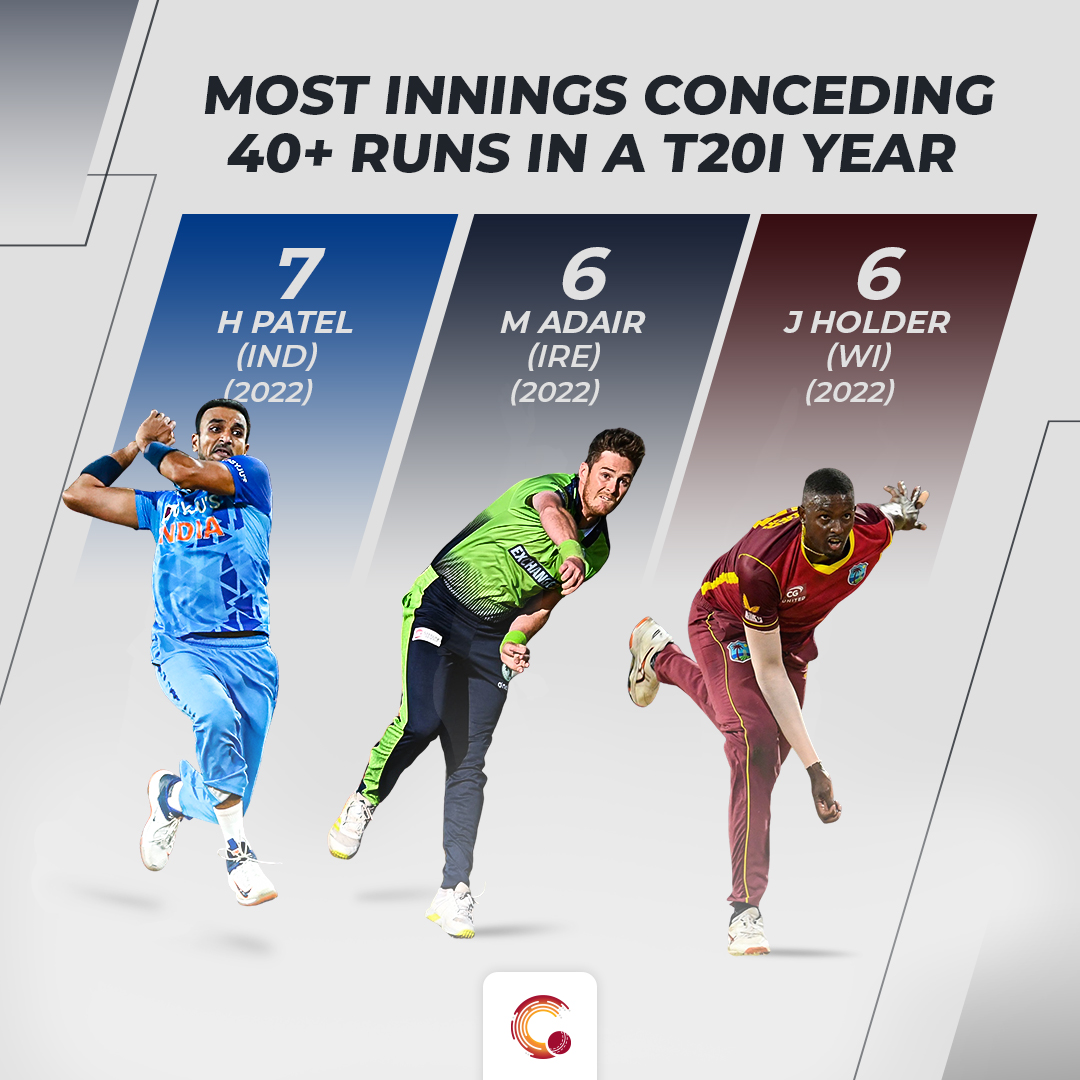 In this match, he conceded 40+ runs for the seventh time in the year 2022. No bowler has suffered this fate in as many innings as Harshal in a year in T20Is. In total, Harshal has conceded at an economy of 9.4 in 69.1 overs this year. Among bowlers who have bowled 50+ overs in a calendar year (92 bowlers), no bowler has conceded an economy of more than him.

Lungi Ngidi featured in two matches this series, and in both matches, he had horrible outings. In the second T20I (his first of the series), he conceded 49 runs in his four overs. In this match, it was worse.

In his three overs, he conceded 51 runs without a wicket. Among South African bowlers who have bowled three-plus overs in an innings, his economy of 17 in this innings is the joint worst. Kyle Abbott against West Indies in 2015, conceded 68 runs in his four-over spell (17.0).

From both innings, Ngidi conceded 14.3 runs per over in this series. Among South African bowlers who have bowled two-plus innings and five-plus overs in a series, his economy in this series is the worst. Previously, Beuran Hendricks against England in 2020, had leaked runs at 13 runs/over.

The captain who never got off the block

Nothing has gone Temba Bavuma’s way in the past one month. Being the captain of the National side, he was ignored in the auction of South Africa’s premier T20 league. 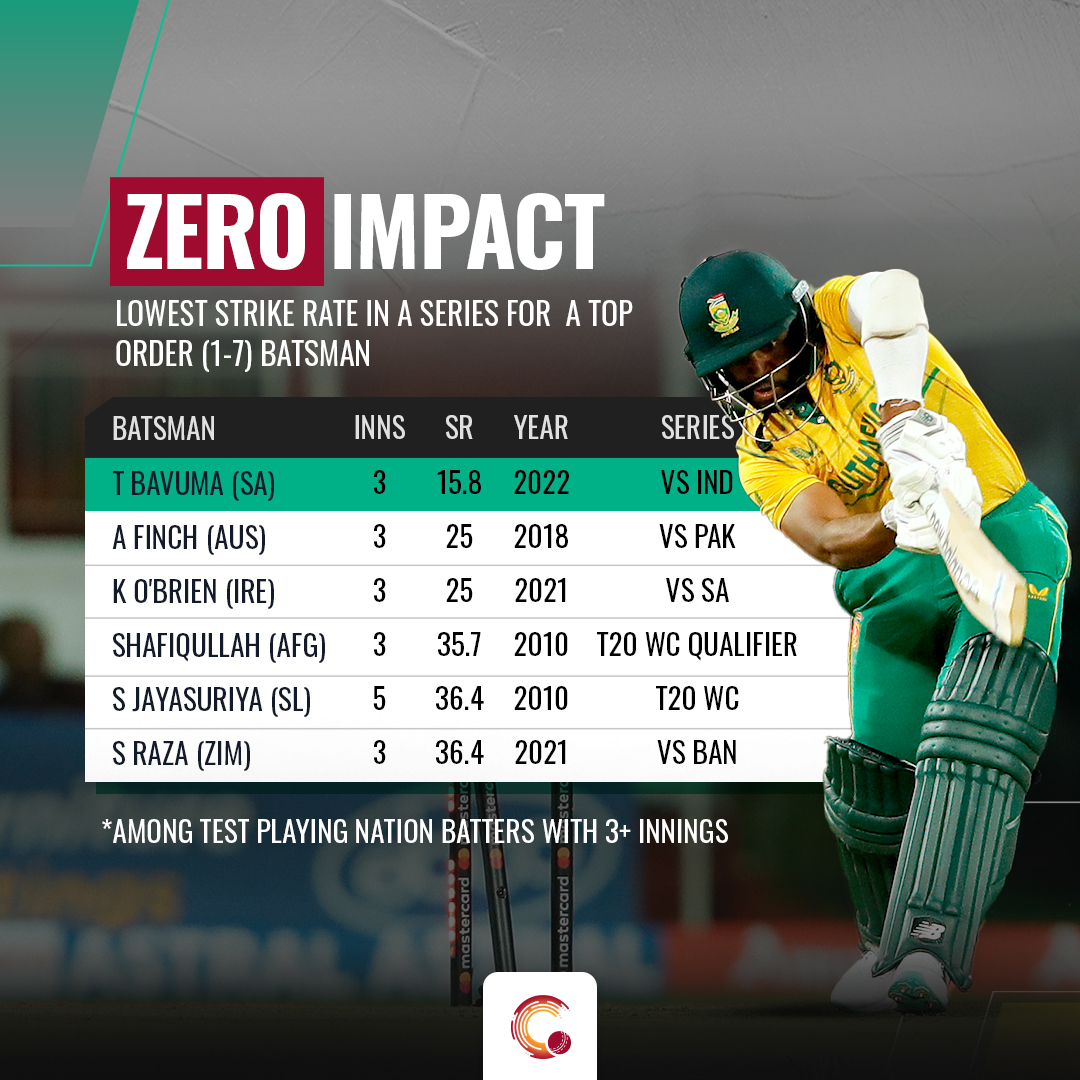 In this series, he started off with two ducks, a four-ball duck in the first and a seven-ball duck in the second. In the last T20I, he scored three runs. Throughout the series, he averaged 1.0 and had a strike rate of 15.8. Among top order batters (1-7) from full-member nations to have played three or more innings in a series, his strike rate is the lowest. In terms of average, only Kevin O’Brien against South Africa in 2021, had a poorer average (3 innings, 2 runs, 0.7 Average).

In the first T20I, Ravichandran Ashwin registered a spell of 0/8 in his four overs. That was largely because of the damage caused by the pacers in the opening burst. Post that, he had spells of 0/37 (4) and 0/35 (4).

Throughout the series, he went wicketless. Among Indian bowlers who have bowled 10+ overs in a series, only three bowlers were wicket-less throughout. Harbhajan Sing in the T20WC 2010, Varun Chakravarthy in 2021 WC, and Ashwin in this series.

In the 29 times India have chased at home in T20Is, this was only their fifth loss, a testimony of their dominance at home. Before this game, their biggest loss had come against New Zealand in the 2016 WC, when they lost by 47 runs. The 49-run loss in this match, marked the biggest defeat for India at home. Overall, this is their joint-second biggest loss. Their 80-run loss against New Zealand in 2019, remains to be their biggest.