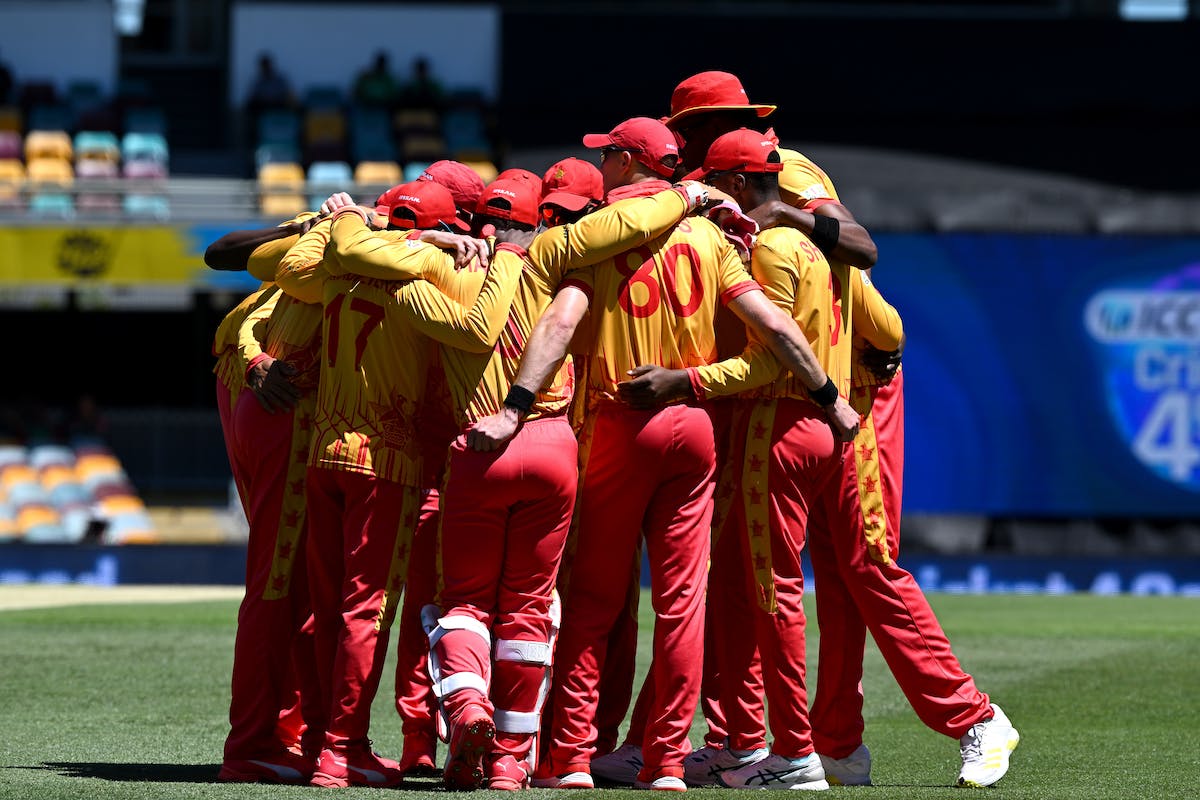 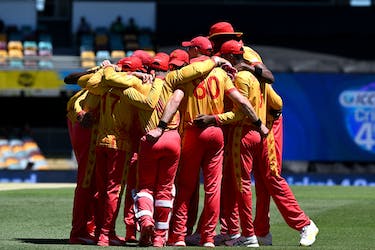 The good news for Zimbabwe is that the task is still very much straightforward: win the next two games and a semi-final spot is theirs

After Blessing Muzarabani wildly swung and missed the final ball bowled by Mosaddek Hossain (twice), the Zimbabwe players looked absolutely crushed. Their expressions almost tended to suggest that they thought their bid to make the semi-finals was over.

But what if we say otherwise?

What if we say that, for Zimbabwe, despite the loss against Bangladesh, nothing has changed. Absolutely nothing?

Victory against Bangladesh would have taken Zimbabwe to five points, but they still would have needed to beat both Netherlands and India to make it to the final four.

The defeat has meant that they have three points to their name instead of five, but the good news for Zimbabwe is that the task is still very much straightforward: win the next two games and a semi-final spot is theirs.

Assuming South Africa win *at least* one of their remaining two games (very likely, given they face Netherlands), the Proteas will get to 7 points.

Assuming India beat Bangladesh (again, very likely, everything points towards an India win), the Men in Blue will get to 6 points.

Zimbabwe will get to five points if they beat the Netherlands on Wednesday, meaning the points tally before the final match of the Super 12 stages between India and Zimbabwe will look like this:

All they need to do, then, is get the better of India in the final game. Of course that’s a ridiculously tough task, but difficulty is not the point here.

So, as things stand, Zimbabwe are very much alive in the race for the semis.

Which is why their clash against the Netherlands at the Adelaide Oval is HUGEEE!

Win and Zimbabwe will be alive in the race till the very final match of the Super 12 stage, notwithstanding other results. Lose and they are out!

Against a Netherlands side that’s beaten, bruised, low on confidence and barely put up a fight against the other sides, Craig Ervine’s men *should* fancy their chances.

Days ago they lost a contest in which they were deemed marginal favorites. We’re about to find out if they can make amends by winning a clash in which they are, without a shadow of doubt, overwhelming favorites.

A first look at the Adelaide Oval! 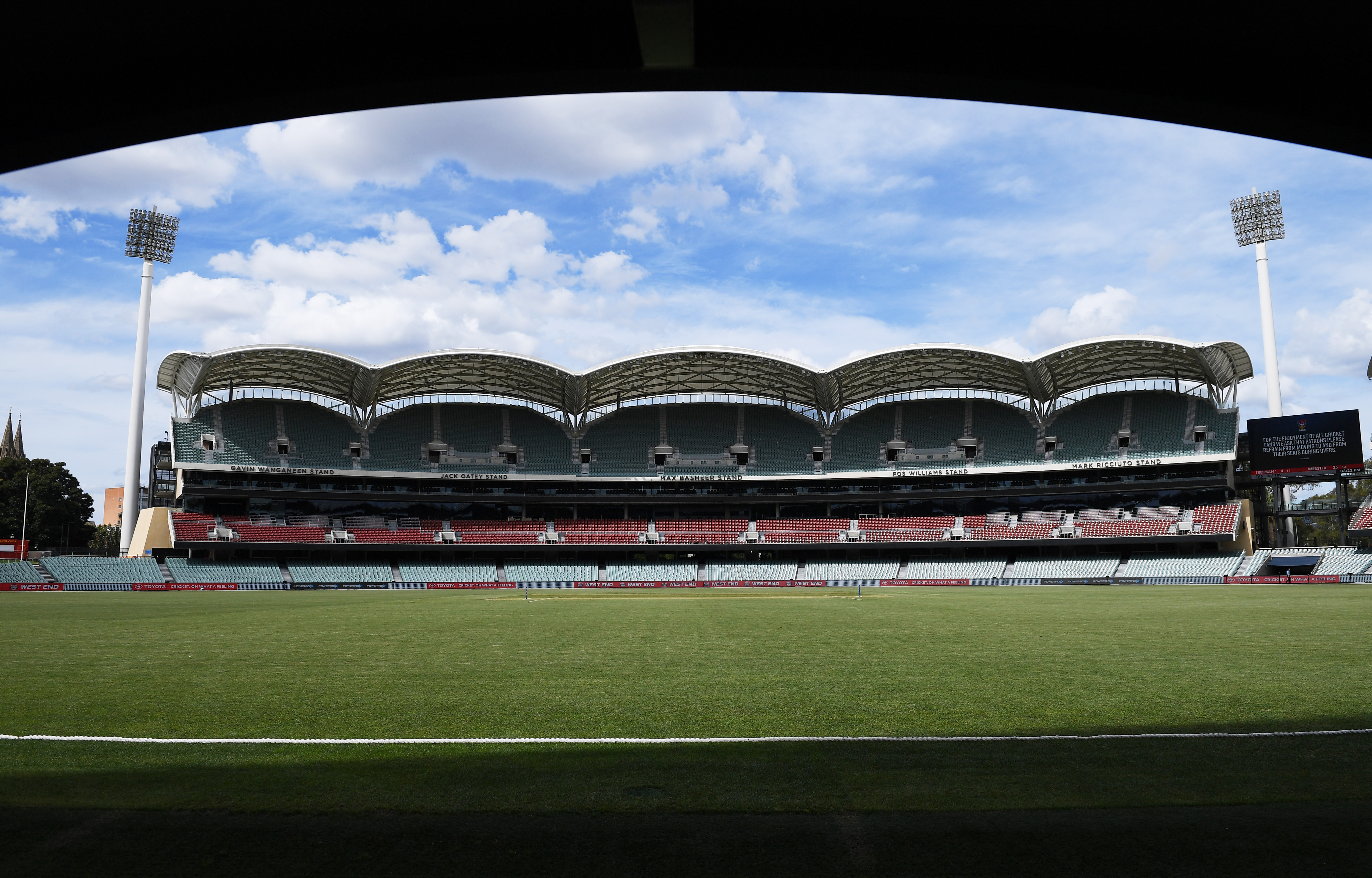 Scheduling hasn’t been kind to Zimbabwe. At all. On Sunday they featured in the first game at the Gabba in this T20 World Cup, and versus the Netherlands, they will be playing in the first match at the Adelaide Oval in this competition.

Ideally any side would prefer to play at a venue they know at least something about, but for Zimbabwe, it is what it is.

They will enter Wednesday’s clash trying to second-guess what the wicket ‘might’ offer. Will there be bounce? Turn? Early movement? Will the wicket be fast or slow?

It will once again be up to their players, therefore, to adapt to the conditions real-time.

Thanks to the mystery surrounding the conditions, the toss could just prove to be decisive. For there’s every chance that the skipper winning the toss might end up calling it wrong.

The good thing from a Zimbabwean perspective is that their opponents, Netherlands, will be as clueless as them about the Adelaide wicket heading into the contest.

Zimbabwe have done a lot of things right in this T20 World Cup, but one thing they’ve monumentally messed up is batting inside the powerplay. It cost them the Bangladesh fixture and almost cost them the South Africa encounter as well (they escaped thanks to rain). 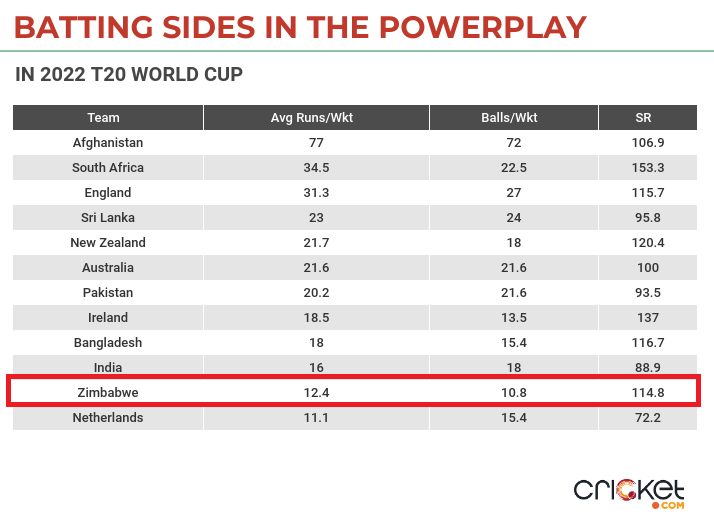 What’s not helped is how poor their skipper Ervine has been against the new ball. In the Super 12 stages, Ervine has perished inside the powerplay in each of his three innings and is averaging a shocking 9.67, the worst among all Zimbabwe batters who have batted thrice in the powerplay.

The others have not exactly covered themselves in glory but being a skipper and a very experienced campaigner, Ervine’s returns are simply not good enough.

What the collapses in the powerplay have done is expose Sikandar Raza to the new ball. Twice he’s fallen inside the first six overs and that’s a catastrophe, for Raza is someone that can do an incredible amount of damage outside the first six.

In this T20WC, the qualifiers included, his numbers inside vs outside the powerplay have been chalk and cheese. He’s averaged nearly 35 and struck at over 150 outside the first six, while in the first six, this number stands at 3.5 and 77.8 respectively.

Zimbabwe will go a long way in beating the Netherlands by just preserving their wickets up-front and giving Raza the best chance to succeed.