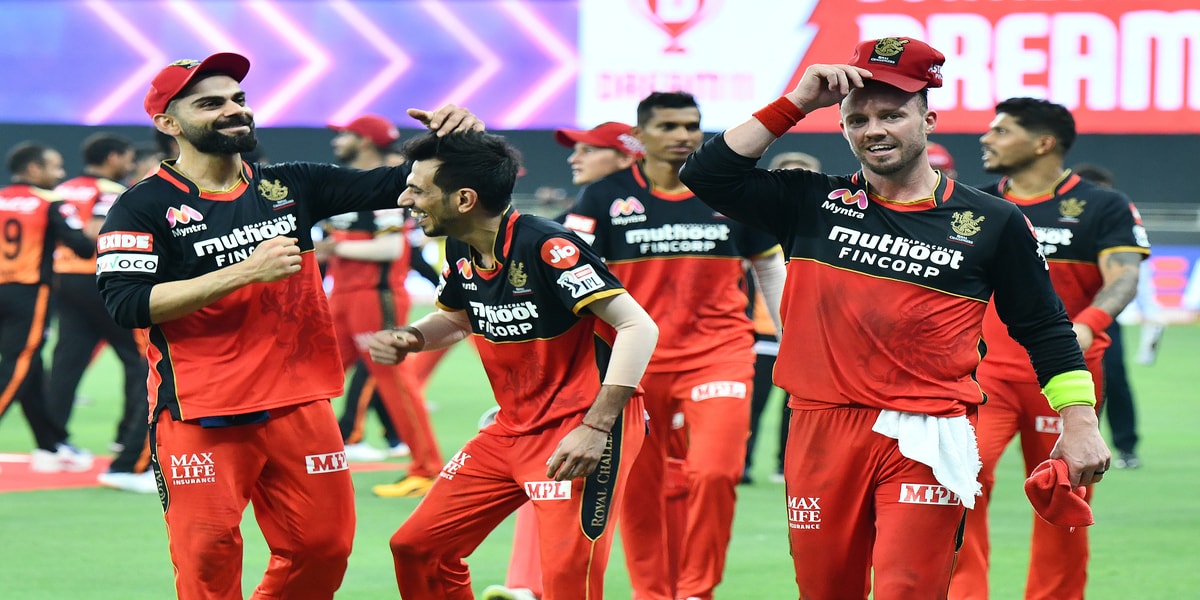 Sunrisers Hyderabad lost eight wickets for 32 runs as Royal Challengers Bangalore pulled off a superb come-from-behind win in Match No. 3 of the Indian Premier League 2020 at Dubai International Cricket Stadium on Monday (September 21). From 121/2, Hyderabad slipped to 153 all-out. Yuzvendra Chahal (3/18) was the destructor-in-chief for Bangalore who won the encounter by 10 runs and bagged two crucial points.

Asked to bat, Devdutt Padikkal smashed a superb fifty on his debut, while AB de Villiers too made an impact, but Hyderabad still managed to pull things back and restricted Bangalore to 163/5. Padikkal smoked 56 off 42 deliveries and put on 90 runs for the opening wicket with Aaron Finch. Hyderabad bowlers however kept picking wickets in the second half of the innings and didn't allow Bangalore to get that late flourish. Bangalore were 86 for no loss at the end of 10 overs but could only manage 77 in the final 10. Things could have gone even worse for Bangalore if not for de Villiers' 30-ball 51.

Jonny Bairstow, who smacked a 43-ball 61, kept Hyderabad in the chase before throwing his wicket away and that allowed Bangalore to make a comeback. All Bairstow had to do was play out Chahal's final over but the wicketkeeper-batsman got out while playing a wild slog. The inexperienced middle-order of Hyderabad then succumbed under pressure and got bundled out in 19.4 overs.

Earlier, both Hyderabad and Bangalore made a couple of eyebrow-raising selections, with the former opting for Mitchell Marsh ahead of Kane Williamson and Mohammad Nabi. They also left out the likes of Abdul Samad and Virat Singh and went with Priyam Garg and Abhishek Sharma. Meanwhile, Bangalore handed debut to Padikkal and Joshua Philippe and left out Chris Morris.

The local lad Padikkal wasted no time in stamping his authority on the big stage and announced his arrival by smashing Sandeep Sharma for two boundaries in the space of three deliveries. The left-hander looked in solid touch from the word go and scored the majority of the runs in the first six overs. Aaron Finch at the other end ensured Padikkal had most of the strike and the 20-year-old made the most of it. Padikkal then greeted T Natarajan with three boundaries in an over and scored 29 of the first 32 runs Bangalore managed in the first four overs.

The likes of Natarajan, Mitchell Marsh and Vijay Shankar were very inconsistent and that allowed Padikkal to play to his strength. Things went from bad to worse for Hyderabad as Marsh started limping and had to walk off after bowling just four deliveries. Warner had to bring in Rashid Khan straight away and that's when Finch finally decided to cut loose, smashing him for a four and a six in his second over.

In the ninth over, Padikkal became the fifth batsman to score a fifty on debut for Bangalore. Having done the same milestone in the Ranji Trophy, Vijay Hazare Trophy and Syed Mushtaq Ali Trophy, Padikkal tonked eight boundaries in his innings before he was knocked over by Shankar in the 11th over. Left-arm spinner Abhishek then pinned Finch right in front of the stumps in the very next over.

Hyderabad bowlers managed to keep Virat Kohli (13-ball 14) and de Villiers quiet in the next few overs and got the scoring rate down to less than eight runs per over. The two batsmen had to get a move on and Kohli tried to take on Natarajan but ended up getting caught at deep mid-wicket. De Villiers too looked far from his best and just couldn't get his timing right at the start of his innings.

There were occasional boundaries but it was in the penultimate over where he finally managed to break the shackles, smoking Sandeep for consecutive sixes. In the process, de Villiers became the second batsman after Chris Gayle to smash 200 maximums for Bangalore. De Villiers completed his fifty in the final over before he was run out with three deliveries to spare.

In reply, Hyderabad got off to a worst possible start as they lost David Warner (6) in the second over in an unlucky fashion. The left-handed opener was run out at the non-striker's end off a delivery that was hit back by Bairstow. The opener from England however found an able ally in Manish Pandey and the two batted smartly to keep the scoreboard moving. While Dale Steyn and Navdeep Saini were decent in the powerplay, Umesh Yadav struggled to get his line and length right and both Bairstow and Pandey pounced on every bad delivery.

Hyderabad raced to 72 in nine overs but Saini and Chahal kept things tight in the next three overs and it was the latter who broke the 71-run stand by getting rid of Pandey for a 33-ball 34. Bairstow however kept the momentum going by slamming Umesh for two fours in the 14th over and in the process also completed his fifty.

With 43 needed off 30, Chahal got rid of Bairstow and Shankar on consecutive deliveries and brought Bangalore back in the game. The inexperienced lower middle-order of Hyderabad allowed Bangalore to dictate terms, with the likes of Garg (12) and Abhishek (7) gifting their wickets. Despite conceding five wides, Saini bowled a superb 18th over and also got rid of Bhuvneshwar and Rashid to bring the equation down to 22 off 12. Marsh (0) tried his luck with an injured ankle but was left with too much to do.

It was Steyn who came back for the final over and completed the demolition by getting the last wicket. Bangalore might have ended on the right side of the result but they still have a lot of thinking to do ahead of their next encounter against Kings XI Punjab on Thursday. Meanwhile, Hyderabad will play their next match against Kolkata Knight Riders on Saturday.