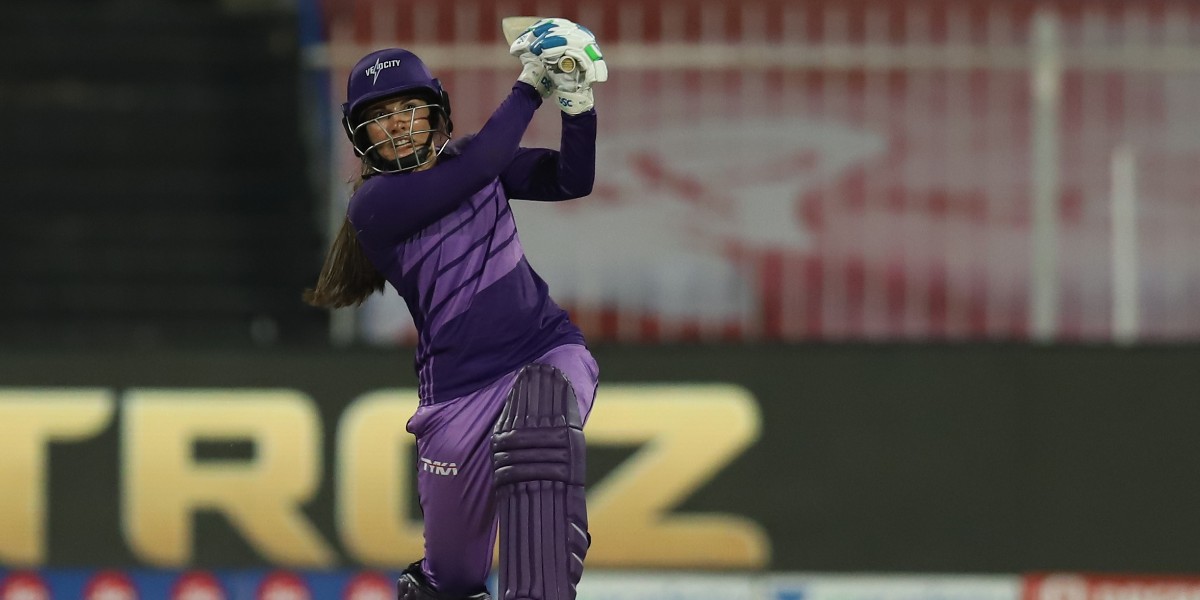 Velocity looked down and out at one stage but Sushma Verma and Sune Luus refused to give up and smashed 61 runs in the final six overs to propel their team to an outstanding five-wicket victory over defending champions Supernovas in Match No. 1 of the Women's T20 Challenge 2020 in Sharjah on Wednesday (October 4). It was a satisfying end for Mithali Raj and Co. who lost to the same opponent in the final of the 2019 edition.

Asked to bat, Chamari Athapaththu (39-ball 44) and Harmanpreet Kaur (27-ball 31) played handy knocks but the Velocity bowlers bowled with great control and allowed them to score only 126/8 in their 20 overs. In reply, they were reduced to 65/4 in 13 overs but Verma (33-ball 34) and Luus (21-ball 37*) put on 51 runs in 35 deliveries and helped Velocity defeat Supernovas for the first time in the short history of the Women's T20 Challenge.

SUPERNOVAS FAIL TO UP THE ANTE

Earlier, there was enough movement for Shikha Pandey and Jahanara Alam and the two seamers didn't allow Athapaththu and Priya Punia to get off to a rapid start. The two batters didn't get too many freebies and had to rely on strike rotation to keep the scoreboard moving. The first boundary of the tournament came in the second over when Punia glanced Jahanara through fine leg. The two managed to up the ante once the spinners were introduced into the attack. There were a couple of boundaries in the space of two overs but just when it looked like the two were getting a move on, Punia chipped one straight into the hands of the fielder at mid-on in the last over of the powerplay. The right-hander scored 11 off 15 before perishing to Leigh Kasperek.

Jemimah Rodrigues, who was the highest run-scorer in the last edition of the Women's T20 Challenge, couldn't contribute much and was dismissed for just 7. The No. 3 batter tried to go after Ekta Bisht (3/22) but was undone by the lack of pace and ended up getting knocked over. The onus was on Athapaththu and Harmanpreet to build a partnership and it was the former who finally decided to cut loose.

The left-hander from Sri Lanka smoked Manali Dakshini over extra-covers for the first maximum of the competition and then tonked Kasperek for yet another six to push the scoring rate over six. Meanwhile, Harmanpreet took some time to settle in before joining the six-hitting party in the 13th over. There were a total of three sixes hit in as many overs, but before Athapaththu could do any more damage, Jahanara sent her back to the hut for a 39-ball 44. The Sri Lankan hit two fours and as many sixes before miscuing one straight into the hands of the long-off fielder. 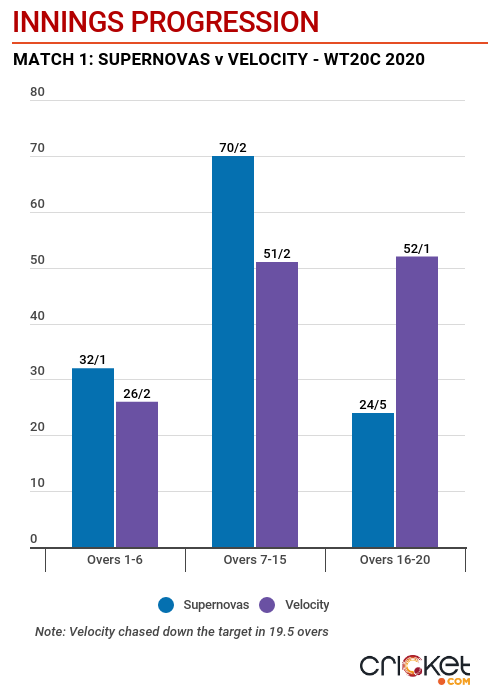 The burden of propelling Supernovas to a competitive total was on Harmanpreet but the skipper failed to make an impact in the last few overs and fell to Jahanara in the 17th over. Harmanpreet scored 31 off 27 but was dismissed while trying to play a fancy shot over fine leg. As expected, the batters looked a bit rusty, but that wasn't the case with Jahanara (2/27) and Kasperek (2/23). Shashikala Siriwardene chipped in with a knock of 18 but the defending champions kept losing wickets and could only manage 24 runs in the final five overs.

VERMA AND LUUS COME TO THE RESCUE

With not much runs on the board, Supernovas needed early wickets and it was Ayabonga Khaka who did the job for them. The right-arm seamer from South Africa dismissed Danielle Wyatt for a duck in the very first over but faced a tough challenge from Shafali Verma (11-ball 17) in her second over. The 16-year-old clobbered her for three consecutive fours but Shafali couldn't carry on and was caught at deep mid-wicket in the final delivery of the over. Velocity could only manage 26/2 in the powerplay.

Coming in at No. 3, Mithali Raj struggled big time and simply couldn't get going. The required run-rate kept getting higher and higher and the pressure started to build on the Velocity captain. The likes of Radha Yadav, Poonam Yadav and Siriwardene gave nothing away in the middle overs and Mithali tried to break the shackles by going after the latter but ended up getting caught at deep mid-wicket. Poonam was superb with her loopy legbreaks and kept the pressure on Veda Krishnamurthy and Verma.

Veda was doing the majority of the scoring and was the only one who was scoring boundaries at regular intervals. The right-hander from Karnataka kept Velocity in the game till she was there in the middle. Veda had four boundaries in her 28-ball 29 but failed to finish the job as she fell to Radha in the 13th over.

With 50 needed off 30 deliveries, Verma and Luus smacked Poonam for a six each and got Velocity back in the game. The two looked threatening and kept playing their shots. Sushma then got the better of Siriwardene and banged her for a maximum over long-on to bring the equation down to 25 off 18. Luus then managed to craft a boundary against her countrymate Khaka, but Poonam returned for her final over and had Sushma caught at long-on for a 33-ball 34.

Velocity needed nine runs from the final over and Luus paddled Siriwardene for a boundary and then sealed the deal on the penultimate delivery with an outside edge that went past Taniya Bhatia. The South African smoked four fours and a six and was named player of the match.