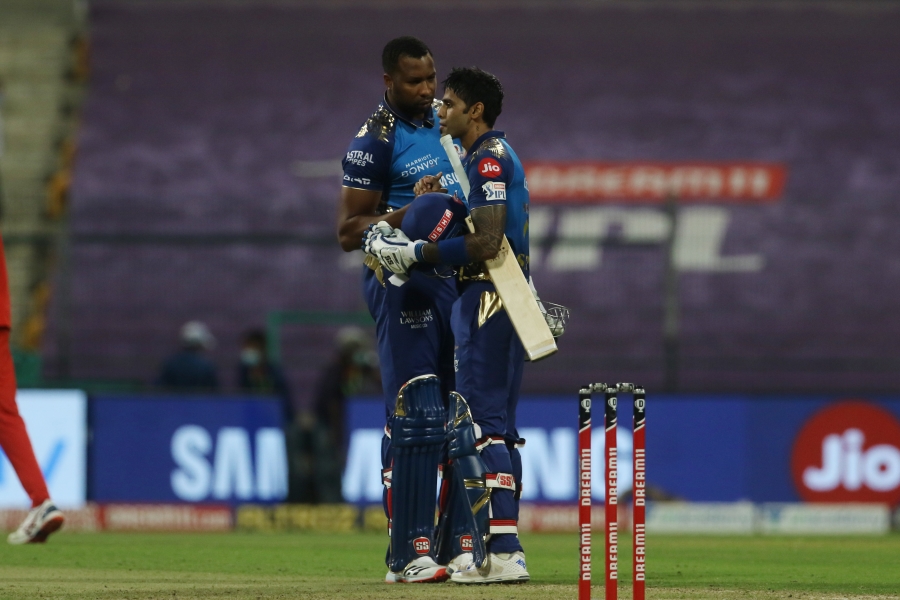 Mumbai Indians skipper Kieron Pollard was effusive in his praise for Suryakumar Yadav, who made quite a statement with a match-winning IPL knock after being overlooked for national duty, and said the batsman is driven by a "burning desire" to don the India blue.

After restricting Royal Challengers Bangalore to 164/6, courtesy effective death bowling led by lead pacer Jasprit Bumrah (3/14), Mumbai Indians rode on a blistering unbeaten 79 off 43 balls by Yadav to chase down the target and record a five-wicket win on Wednesday night here.

"It (Yadav's innings) was very, very valuable. We always spoke about one of the top three batters, or top four batters, bat all the way through if you are chasing, go all the way through and win the game for us. He (Surya) has done that more often than not," Pollard said at the post-match media conference.

"...he wants to do well and today again he showed his class on how well he can bat...and deep down inside the burning desire to don that blue, but again he continues to show consistency, which is all that he can do as an individual," he added.

Yadav was overlooked for India's tour of Australia despite his consistent run.

Pollard also said that it was a good bowling effort to restrict RCB to 164/6, as at one stage, the opposition looked like putting 190-200 runs on the board.

"At one point it looked like we were staring at the barrel at 190-200 and I thought we came back really well and to restrict a batting line-up like RCB, with wickets in hands, and the position they were in to 165 was well done to the bowlers.

"Bumrah coming back and getting wickets, Boulty (Trent Boult) as well, Krunal Pandya bowling four economical overs, so again, was a total team effort in terms of the bowl and restricting them was very good for us," he added.

He also conceded that getting AB de Villiers was crucial, else the momentum would have shifted in RCB's favour. According to Pollard, Mumbai wanted to come back stronger and get two points.

National coach Ravi Shastri has urged Suryakumar Yadav to "stay strong and patient" after the Mumbai Indians batsman impressed with an unbeaten 43-ball 79 in the IPL despite the heartbreak of being ignored for India's tour of Australia.

"Surya namaskar. Stay strong and patient @surya_14kumar #MIvsRCB," Shastri, who is in Dubai, tweeted after the match.

After the win, Suryakumar took off his helmet and signalled to the dressing room reminding them "to keep faith in him as he will get the job done".

"What a knock by @surya_14kumar! Don't know what else he can do to wear the national colours! Brilliant knock a treat to watch and hope to see you do the same in the Indian colours soon! #MIvsRCB #IPL," former chairman of selectors Kris Srikkanth tweeted.

Suryakumar has so far scored 362 runs from 12 matches at an average of 40.22. The legendary Sachin Tendulkar and veteran spinner Harbhajan Singh also lauded him.

Suryakumar took it away from us: RCB head coach Katich

Suryakumar Yadav's blistering knock pushed them out of the contest said Royal Challengers Bangalore head coach Simon Katich as his side lost to Mumbai Indians by five wickets.

After restricting RCB to 164/6, courtesy effective death bowling led by lead pacer Jasprit Bumrah, Mumbai Indians rode on blistering unbeaten 79 off 43 balls by Suryakumar to overhaul the target on Wednesday.

"He (Surya) is a very good player, he has had a good tournament and today he was the difference, getting that score and scoring as quickly as he did. (He) put (Yuzvedra) Chahal under pressure, with some good boundaries and sixes," Katich said at the post match press conference.

" there was period there (when they) were 3-70 and we looked like we were getting on top but then Suryakumar played a magnificent innings and got the momentum back in their favour pretty quickly after they lost that third wicket and then it was difficult for us to get back into the game," the head coach said.