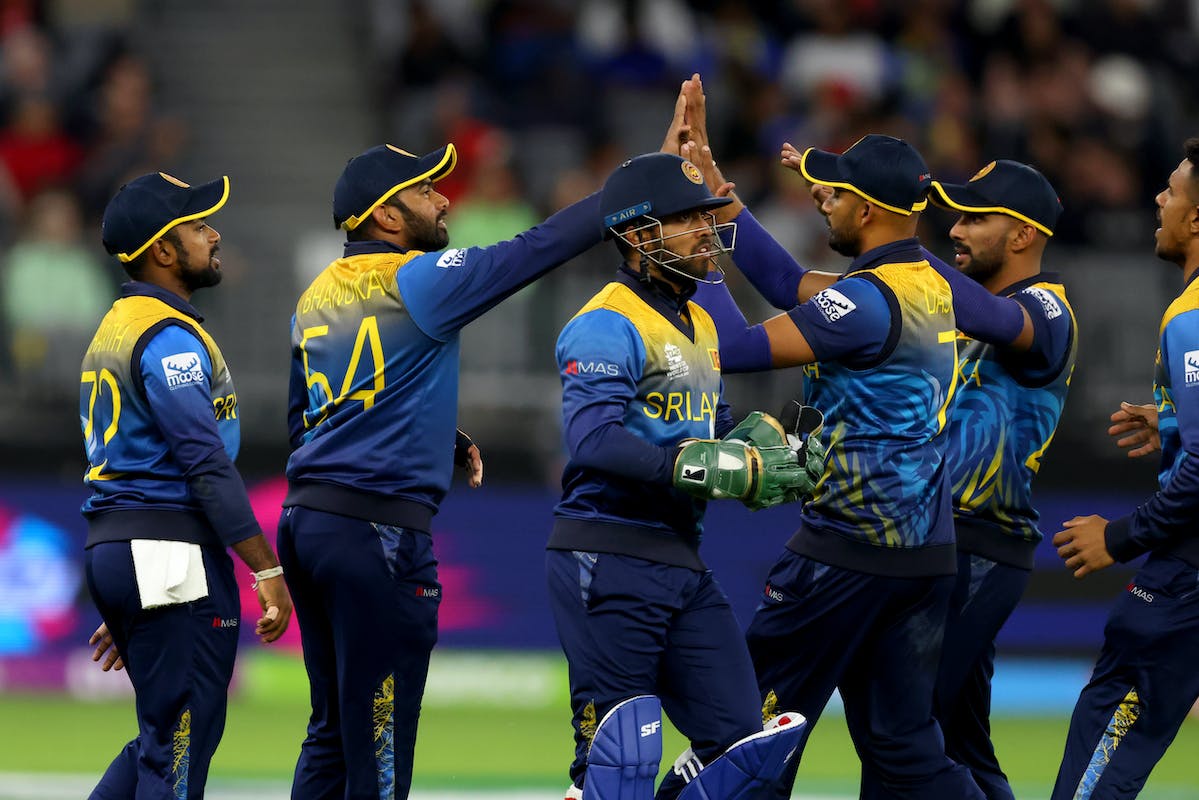 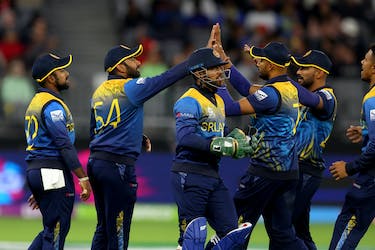 Prior to the Super 12s you would not have picked Sri Lanka vs New Zealand out as a marquee clash, but three successive washouts in Group 1 has, all of a sudden, turned this encounter into a hugely anticipated one.

For such is the scenario in Group 1 currently that the winner of this contest will put themselves in pole position to make it to the playoffs.

New Zealand saw a winnable game for them — the Afghanistan clash — get washed out, but despite the MCG clash serving as a missed opportunity, they will put themselves in the drivers’ seat by registering a win on Saturday. Victory on Saturday will take the BlackCaps to 5 points, ensuring that they go at least two clear of every other side in their group. For the Kiwis, the importance of this clash cannot be stressed enough.

It is not too different for Sri Lanka, who with a win will go top of the group, albeit just one clear of the other close contenders. You suspect that should Sri Lanka find themselves top of the group having played both Australia and New Zealand, they’ll really fancy their chances of making it to the semis.

The good news is that rain is not expected to play spoilsport. At least as things stand, the forecast is clear.

Fingers crossed that it remains the same. We could be in for an absolute treat at the Sydney Cricket Ground on Saturday.

Kiwis’ proficiency versus leg-spin makes for a fascinating contest

It is no secret that you go a long way in beating Sri Lanka in the shortest format by taking down their main man, Wanindu Hasaranga. That is precisely what Australia did in Perth a few days ago as they tore into the leggie, smashing him for 53 runs off just 3 overs — his worst ever figures in T20I cricket. The onslaught, orchestrated by Maxwell and Stoinis, left Sri Lanka shell shocked and knocked them out for good.

Normally, you’d think that against a team like New Zealand, Hasaranga has a golden opportunity to bounce back. The general stereotype around New Zealand, at least, is that you can boss them with spin.

But here’s where things get interesting. Especially for Hasaranga.

The Kiwis, in fact, have been the best performing T20I side against leg-spin since the start of 2021, averaging a mammoth 40.7.  They are the only side to average over 40 against wrist-spin in this period, and they’ve managed to do so while going at over 8 runs per over. 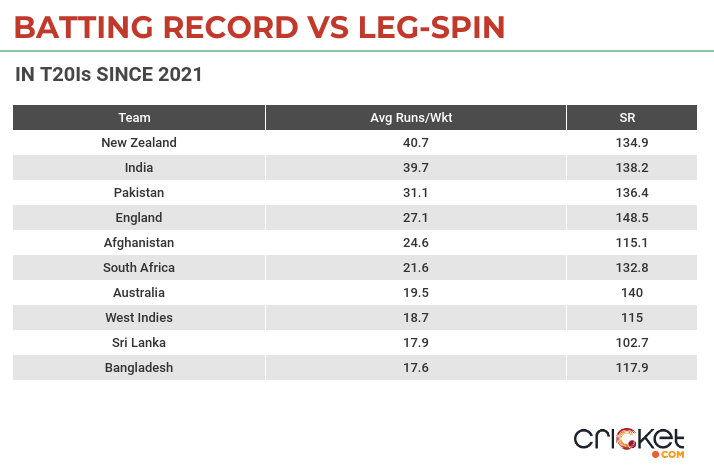 A lot of this has come down to the excellence of Devon Conway, who’s been close to impregnable. Since the start of 2021 in T20Is, Conway is averaging 71.5 versus the leggies, while striking at nearly 135. On paper it’s supposed to be a ‘favourable’ match-up, and Conway has done everything right from his part to boss the same. 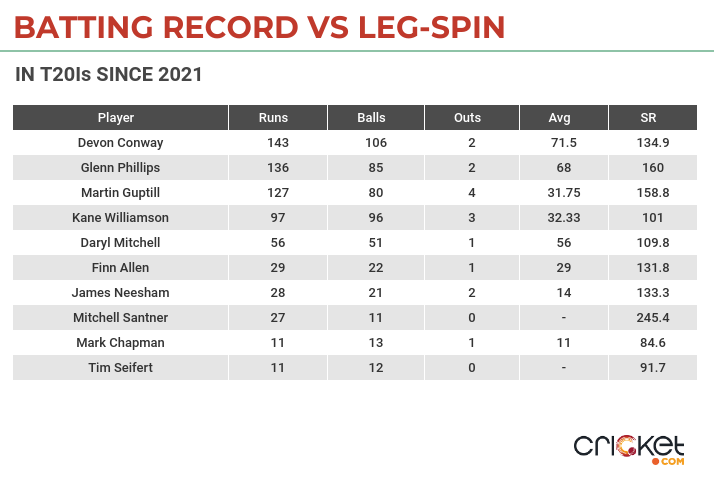 Against Australia in the first game of the Super 12s, it was Conway who was instrumental in the Kiwis neutralizing the threat of the Kangaroos’ trump card, Adam Zampa. The southpaw faced 17 of the 24 balls bowled by the leggie and made the fullest use of it, smacking 32 runs. Once Conway took care of business from his end, the Kiwis strolled their way to 200.

But Sri Lanka and Hasaranga also need to be wary of the threat possessed by Glenn Phillips who, evident from the table above, has the ability to tear into wrist-spin when he’s in the zone. Phillips has not faced Hasaranga in his career (all T20s), but in the 55 balls he’s faced against Zampa and Shadab Khan in T20Is, the right-hander has smashed 105 runs while being dismissed just once.

On paper, then, the Kiwis have the edge over Hasaranga. This sub-plot, therefore, makes two things extremely crucial: the need for the Lankan pacers to pick early wickets, and the need for Maheesh Theekshana to produce yet another worldie.

Sri Lanka need their lower/middle-order to step up 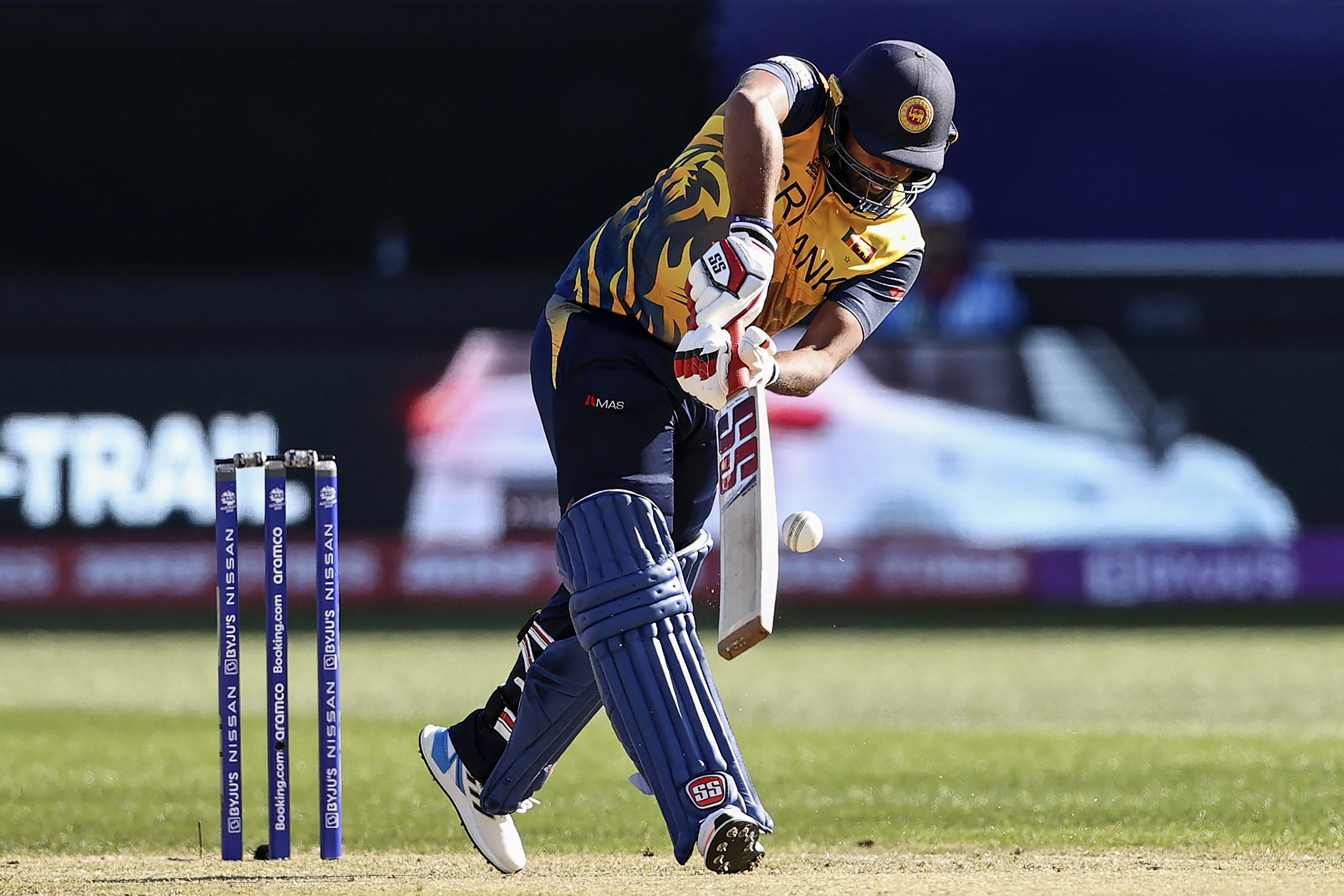 So much of Sri Lanka’s Asia Cup success was down to not just the top-order getting big runs, but the team’s lower-order chipping in with telling, impactful contributions in times of need. The top-order is still delivering, but Sri Lanka have been plagued by the fact that their lower-order has gone completely AWOL.

So far this World Cup, an astonishing 72.3% of Sri Lanka’s runs have been scored by their Top 4. This is not necessarily an alarming statistic if the team is winning matches convincingly and, say, if the lower/middle-order hasn’t had a lot to do. But it’s been anything but that. The reality is that the lower/middle-order batters haven’t shown up when they’ve had to, in turn hurting the side big time.

Take the Australia match, for instance. With six overs left, Sri Lanka had crossed 100 and still had seven wickets in hand, with Rajapaksa, Shanaka and Hasaranga all at their disposal.

Ideally, from this situation, you’d expect them to at least amass 60 runs more, with their big-hitters chipping in.

However, they would end up scoring just 37 off the next 5 overs, with a freak 20-run final over propelling them to 157. Between them, the aforementioned trio managed just 11 off 14 balls.

Perhaps we can cut Hasaranga some slack, given his primary job isn’t to bat or hit boundaries, but the Lankans have been let down big time by the experienced duo of Rajapaksa and skipper Shanaka, who have averaged 12.70 and 10.00 respectively, both striking at under 120.00.

Coming to the party against a well-rounded, world-class attack like New Zealand won’t be easy, but if Sri Lanka are to somehow make the semis, they need their big-hitters to hit the ground running.

So far, it’s been too little. One more off-day and it might be too late.

With Binura Fernando injured, Pramod Madushan is expected to walk back into the XI, having recovered from injury. Sri Lanka are unlikely to make any other change.

Expect New Zealand to retain the XI they fielded against Australia, given the venue is also the same.