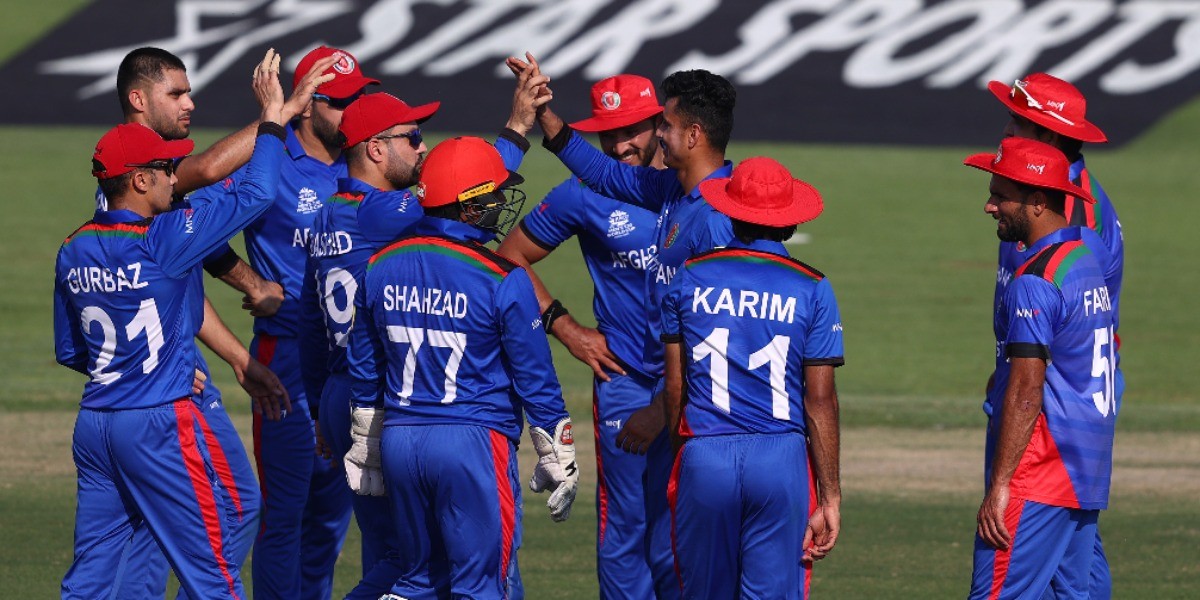 Despite the lack of international cricket this year, Afghanistan players have been part of franchise leagues throughout the year

Afghanistan enter the tournament with many things that are more concerning than cricket. The Taliban takeover of the country was followed by the resignation of Rashid Khan as the T20I captain and later the removal of CEO Hamid Shinwari. Adding to the raging fire, Cricket Australia decided to scrap their maiden Test against Australia later in the year. There is always the fear over the safety of their loved ones amid the escalating violence everywhere in the country. However, cricket offers the nation an identity separate from its political ideology and fighting to keep it remains their biggest motivation at the T20 World Cup. 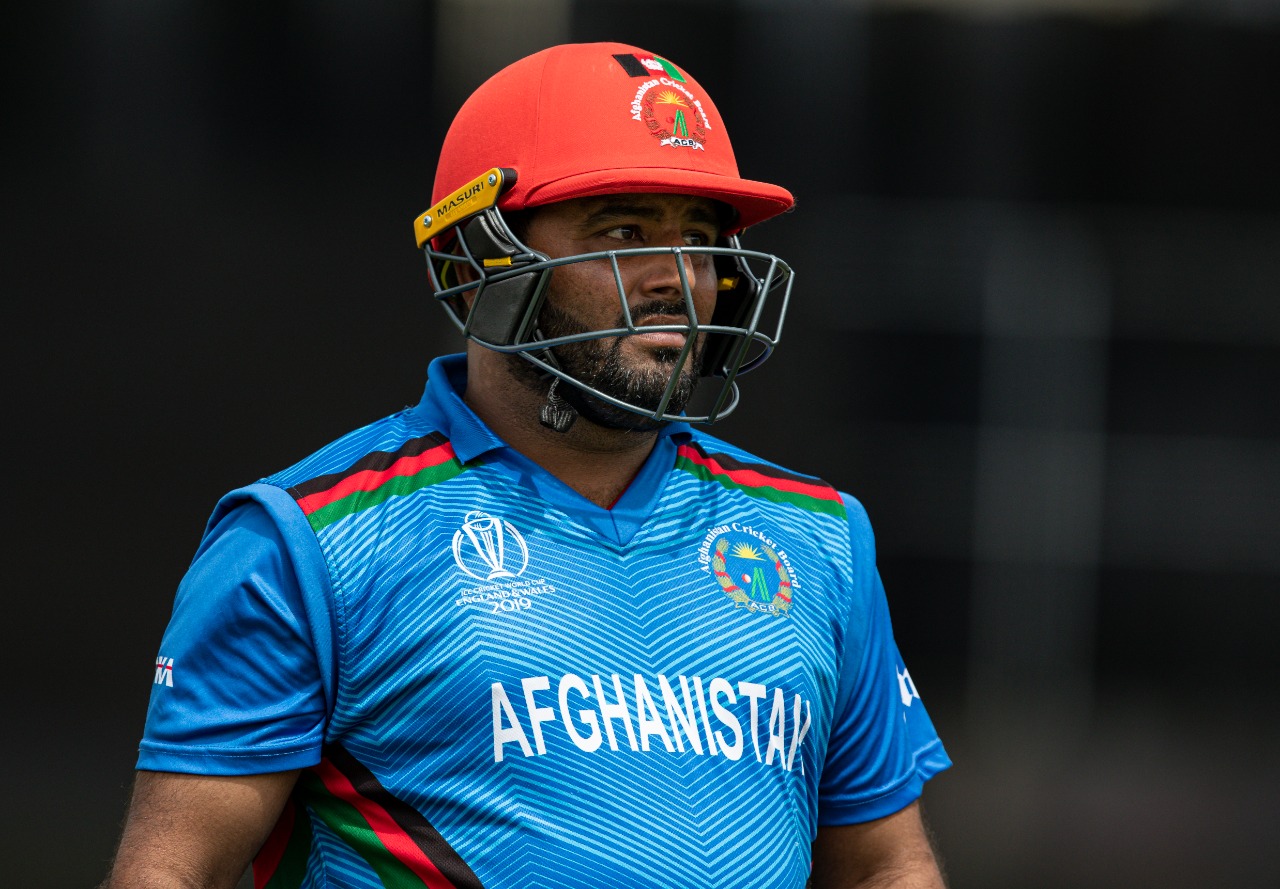 Afghanistan had managed to play only three T20Is in the entire year which came against Zimbabwe. Only four from their squad of 15 have played more than 10 T20s since the beginning of the year. Two of their top-order batsmen – Hazratullah Zazai and Mohammad Shahzad – were in great touch while playing in the Pakistan Super League and Everest Premier League respectively, but haven’t played any international cricket.

With domestic cricket season not even on the cards, the likes of Fareed Ahmed, Hashmatullah Shahidi, Asghar Afghan and Usman Ghani have not played after the Zimbabwe series. The resignation of Rashid as the captain also meant Mohammad Nabi had to step forth as the captain for the third time in his career. Despite Nabi’s influence as a senior player in the squad, the ACB selection committee’s constant back and forth with the leadership will bother the players.

Despite their vast spin-bowling reserves, Afghanistan have three frontline pacers in their final squad which includes all-rounder Gulbadin Naib. Left-arm pacer Fareed Malik hasn’t played since March, while Hamid Hassan is yet to play a T20 since September last year. In the warm-up game against South Africa Naib and Malik looked rusty as they leaked runs above 9 an over, which is something head coach Lance Klusener will be worried about, going into the Super 12 stage.

Despite being unable to play international cricket, Afghan players continue to make their mark in franchise leagues worldwide. Batting consultant Andy Flower pointed out the strengths that lie within their spin department going into the tournament.

“The advantage we have with our spinners is that they’re bloody good at what they do. Rashid and Mujeeb [Ur Rahman] have some mystery about them, they play a lot but they’re still not easy to pick and, even if you can pick them, they’re not easy to score quickly against. Those two allied with Mohammad Nabi gives us a potential 12 overs of spin in an area of the world where spin is effective,” he said in a recent interview with Guardian. 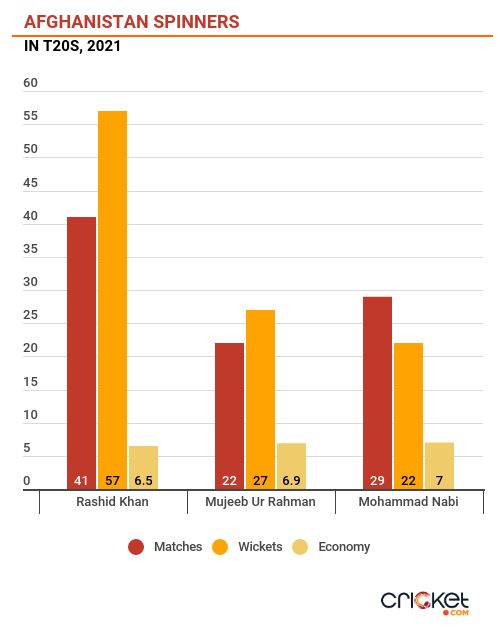 Rashid remains the show stopper for the side having played in this year’s IPL and PSL in UAE. He was the silver lining for Sunrisers Hyderabad, who endured their worst season ever, with 18 wickets from 14 matches at an economy of 6.6. This year, the leg-spinner is the leading wicket-taker in the shortest format with 57 scalps, two more than Bangladesh’s Mustafizur Rahman who has played three more games.

Naveen-ul-Haq’s medium pace remains a valuable asset for Afghanistan as he has the ability to pick wickets at any point of the innings. He comes off a sensational season in the Vitality Blast where he finished top wicket-taker with 26 wickets from 14 matches for Leicestershire. Mujeeb Ur Rahman did not play in the second leg of the IPL recently, but the all-rounder was superb for Brisbane Heat in the Big Bash League with seven wickets from four matches.

Nabi, despite being sparingly used by SRH in the IPL, was sensational in the first leg of the PSL 2021 with 174 runs from five matches. The all-rounder remains a key player with his vast experience playing in the UAE for various teams in the past decade.

It's a refreshing change for Afghanistan that they didn’t have to go through the qualification round. They face a steep challenge of making it through to the semis after being pooled with Pakistan, New Zealand, India and two tough qualifiers in the form of Scotland and Namibia. Afghanistan have been dominant against lesser-ranked teams, but an inconsistent batting unit and an underperforming pace battery has often robbed them of wins against bigger teams. They will need two big performances besides the winning against qualifiers teams to have a chance at the semifinals. 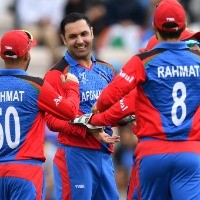 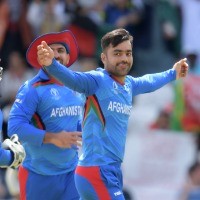