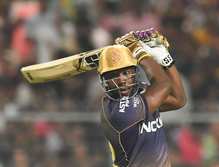 One team is top heavy; the other has all the weight at the bottom – and both teams need a win.

There was a moment, Friday (April 19) when RCB captain\nVirat Kohli looked up at a ball climbing the night sky, then dropped his head\nand stood there, frozen for long moments that seemed a lifetime, staring at the\nnothingness at his feet.

It was the last ball of the 15th over,\nbowled by Yuzvendra Chahal, and it had disappeared into the dark of the night\nover long on – the third of three successive sixes off the bat of Andre\nRussell.

Kohli’s expression was that of a man forced to relive\na nightmare. When the teams last met, at Bengaluru on April 5, he and AB de\nVilliers had played brilliant knocks to lift the home side to 205/3, and by the\nend of the 17th over was well in control of the game, having reduced\nKKR to 153/5, needing 53 off 18 balls with Dre Russ on one run off two balls.

And then came that moment familiar to fans of\nsuperhero films: The moment Clark Kent pops into a phone booth and emerges as\nSuperman, except that Dre flies without needing a cape. He clubbed 48 off 13\nballs (46 came off just eight scoring shots) and took his side home with an\nincredible five balls to spare.

Kohli must have thought, while watching Russell kick\ninto high gear with three successive sixes off Chahal Friday night, that he was\nwatching a replay. In the previous over, Russell had clubbed three successive\nsixes off Marcus Stoinis (Bowlers get celebrated for hat-tricks; how come\nbatsmen don’t get equally lauded for hat-tricks of sixes?). The ask before the\n15th over: 113 off 36. After that over, 93 off 30. After the 16th,\n76 from 24. And so it went until, needing 24 off the final over, from Moeen\nAli, Superman finally crashed to earth.

Think of it this way: When Russell walked in to bat at\nthe fall of Robin Uthappa’s wicket off the 5th ball of the 12th,\nKKR needed 135 from 49 with four down and no real batting left. Russell fell,\noff the 5th ball of the 20th, for 65 off 25 balls with an\nincredible nine sixes – and KKR lost by just ten runs. Or, as Russell said in\nthe post-match conference, “just two hits”.

It was sad, that press conference. Sad to watch\nRussell, couching his words diplomatically, saying exactly what we had said in\nour preview: That he is batting too low  in the order, behind players who are\nnot fit to be breathing the same air as him. When he was asked if he thought he\nshould bat higher up the order, Russell said “I believe that”, and then put his\nfinger on his lips, as if physically restraining himself from saying more.

KKR’s obstinate refusal to do the obvious cost it dear\non Friday – because in a tournament of this kind, where you are fighting for\none of four places in the playoffs and are placed sixth, the one thing you\ncannot afford to do is lose to a side ranked lower than you. KKR is now on 8\npoints from 9 games played with four wins and five defeats – if it had won RCB,\nas Russell and Nitish Rana nearly achieved, it would be going into Sunday’s\nfixture against SRH (which also has eight points) with ten from eight and in\nfourth place, ahead of KXIP which has the same number of points but a negative\nrun rate.

One factoid, just to rub this in: Robin Uthappa (nine\nruns from 20 balls including a four, which means that he scored five runs off\n19 balls) occupied the crease from the last ball of the 4th over to\nthe 5th ball of the 12th over, to make room for Russell.\nThis, when the team was chasing 214 to win.

The graphic is self-explanatory. Uthappa and Karthik together score less than Russell on his own – this, despite Russell playing the last three games with a visibly damaged right wrist). As for strike rate, we won’t even go there.

There is really little point in analyzing KKR’s bowling unit (which is actually pretty decent) and all-round strategies – the team’s single biggest problem is that they have the best impact player, by a distance, in this competition (Among the top ten batsmen in IPL 2019, the player who comes closest to Dre in terms of strike rate is Warner – at 145.16 to Russell’s 220.46.

Until captain Karthik gets his head out of the sand and realizes that his best lineup is Chris Lynn, Sunil Narine, Nitish Raina, Andre Russell, Shubhman Gill, Robbie Uthappa and Karthik himself, in that order, KKR will continue to lose more than it wins.

If KKR’s problem is that it has its batting cards arranged badly, SRH has the opposite problem: No batting cards worth speaking of.

815 runs by the two openers, 315 runs by every other batsman who has played at least one game. Enough said.

As if this untenable dependency on the top two were not enough of a handicap, SRH further shot itself in the foot with its decision to bring back Kane Williamson into the lineup. There is no doubt that the Kiwi skipper is one of the world’s premier batsmen – in the 2018 season, he was the top run-getter in the IPL with 735 runs in 17 games, striking at a very impressive 142.44.

But equally, there is no doubt that though Williamson has recovered from his injury, he is nowhere near anything resembling form. To repeat a point made earlier, Williamson has a total of 20 runs in three outings since his return; against that, the player he replaced – Mohammed Nabi – has not only scored double – 40 – in the three innings he got to bat, at a strike rate of 133.33 (against Williamson’s 86.95), but Nabi also has 7 wickets from just four innings, striking at 13.57 (that is just one wicket less than Rashid Khan and Sandeep Sharma, both eight wickets in eight games, and better than Bhuvi Kumar (five wickets in eight games).

Swapping Nabi out for Williamson to “strengthen the batting” was a bad move on two counts – names don’t strengthen batting, form does. And what SRH ended up doing was, it sat out a bowler who had the best economy rate and the best strike rate, a bowler who bossed powerplays whenever he got into the team, and who could strike a few useful blows, in favor of a batsman who is in no shape to bat.

Sunday’s game is being played at Uppal, which after starting out as a batting wicket has midway through the season done a U-turn and now plays on the slow and low side. In terms of comparative performances, SRH has the edge with its bowling (an edge that can be sharpened further if Nabi comes back): 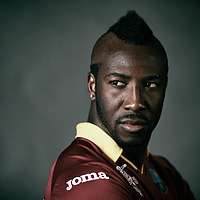