The Capitals’ rise to the top 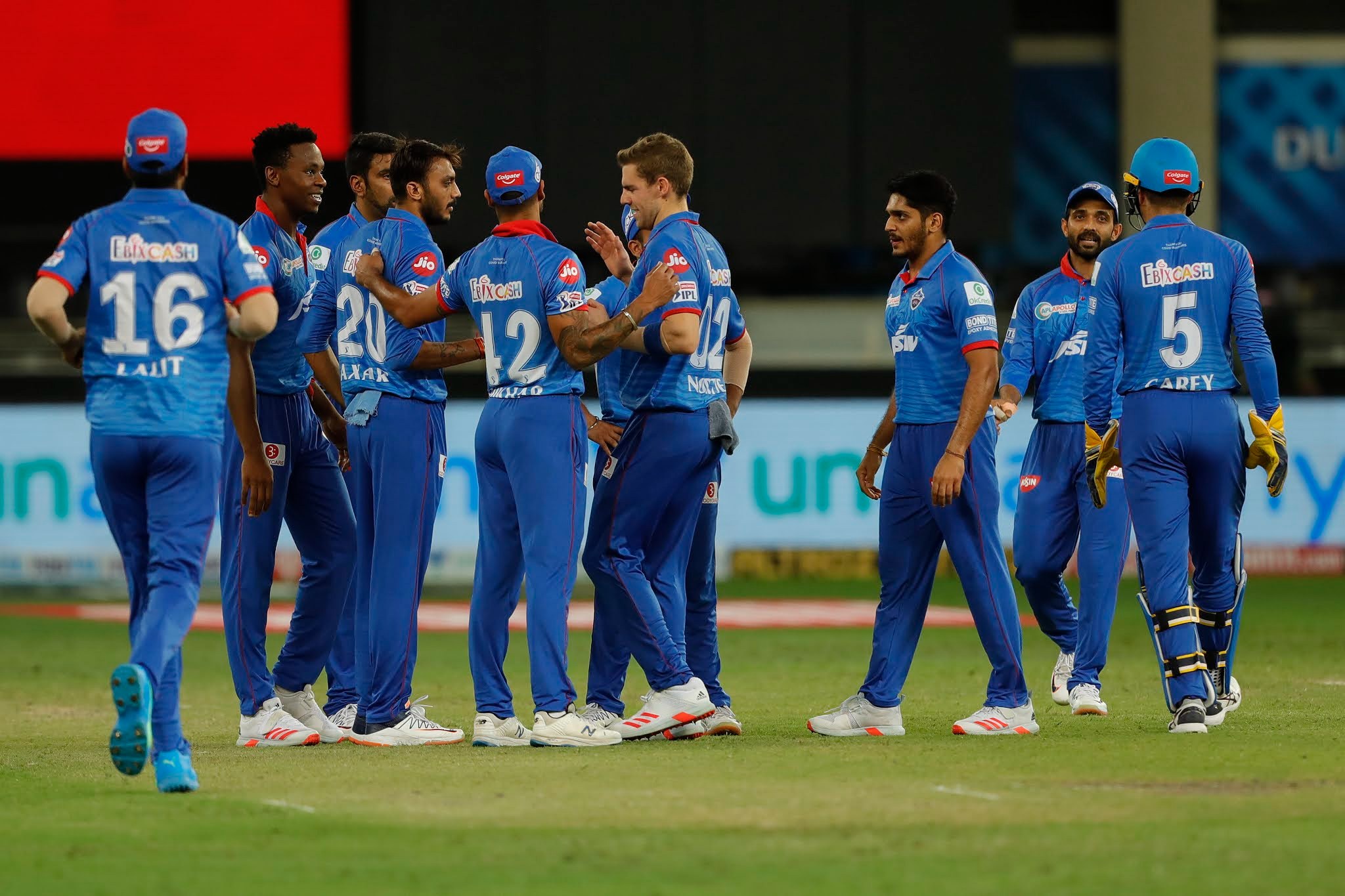 The Capitals’ rise to the top

Six years is a long time to languish in the bottom half of the points table and if you are occupying the last two spots consistently, it feels like an eternity. After topping the table in 2012, Delhi Daredevils suffered a string of poor results to the extent that they were merely seen as participants in the competition.

Rebranded to Delhi Capitals ahead of the 2019 season, the franchise has shown a new avatar on the field as well with their performances. They made it to the playoffs in 2019 and look more authoritative with their approach in 2020. With six wins in eight games, they don’t appear to be content with a top-4 finish anymore but are aiming higher instead.

A messed up auction

DC went into the 2020 IPL auction with fewer holes to fill than other sides. With a core of Indian batsmen and spinners, they had to find a finisher and a supporting pacer for Kagiso Rabada.

They plugged those holes but one may question if they picked the right players? Marcus Stoinis achieved success in the format as an opener while Chris Woakes was yet to prove his credentials as a T20 allrounder. Moreover, DC had an abundance of openers in their squad.

DC were quick to fix their mistakes. The deferral in the tournament helped. Jason Roy and Woakes pulled out. DC replaced them with two fast bowlers - thus finding support for Rabada - Anrich Nortje and Daniel Sams. Sams is yet to play but Nortje, an equivalent to Rabada in every sense barring the experience, has probably been the best debutant of the season.

Unforeseen nature of pitches helping out?

With the tournament shifting to UAE, the general consensus suggested that sides with good spin bowling attacks will be at an advantage. DC had a top-notch pool of spinners but the pitches in the first half offered sparse assistance for the tweakers. Instead, the tracks were conducive to pace.

DC were flexible enough though. They followed Mumbai Indians’ template of two overseas pacers unleashing Nortje and Rabada in tandem. It took the load off Rabada who was the one-man army in the pace department the previous year.

Nortje, as mentioned above, has been a revelation. He may have taken only 10 wickets in comparison to Rabada’s 18 but most of his scalps have been game changing. Criclytics rates his spell of one for 25 against Rajasthan Royals in Sharjah as the most impactful four-over spell by a DC bowler this season to date.

Except Mohit Sharma in their season opener, Nortje is DC’s only pacer to take a wicket in the Powerplay. At the death, he has been the tournament’s most economical pacer with a cut-off of 10 overs. 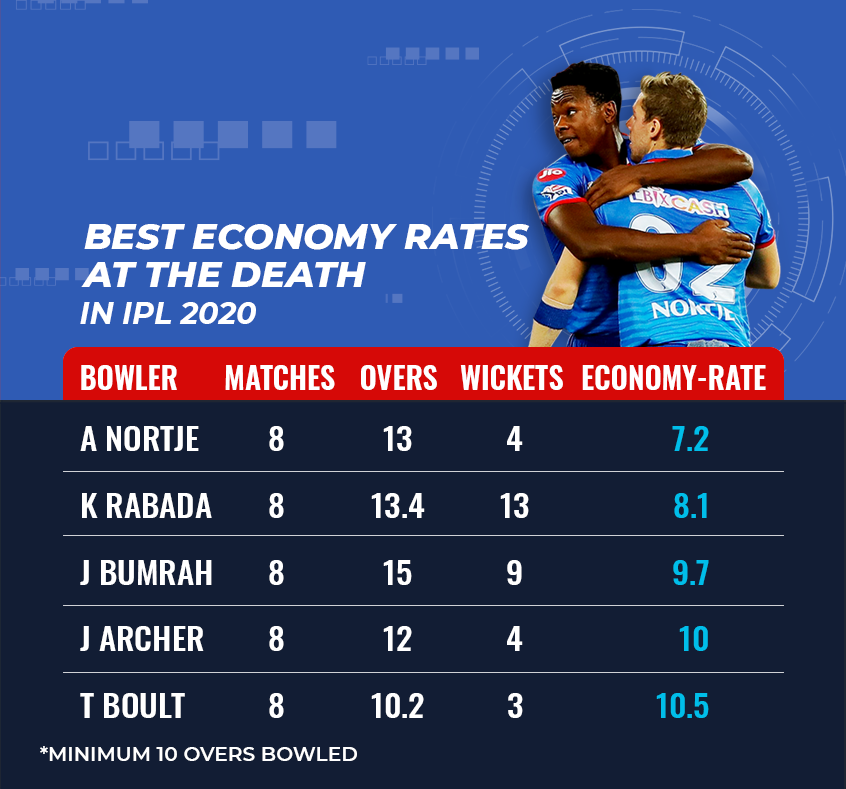 Bullying the batsmen with his raw pace, he has bowled the fastest ball in the tournament’s history this season clocking 156.5 kmph. In fact, he is the proprietor of three fastest deliveries bowled in the 13 editions of IPL. Pace has been an inspiring addition to DC’s squad which was earlier playing a majority of their games on the sluggish tracks of Feroz Shah Kotla. 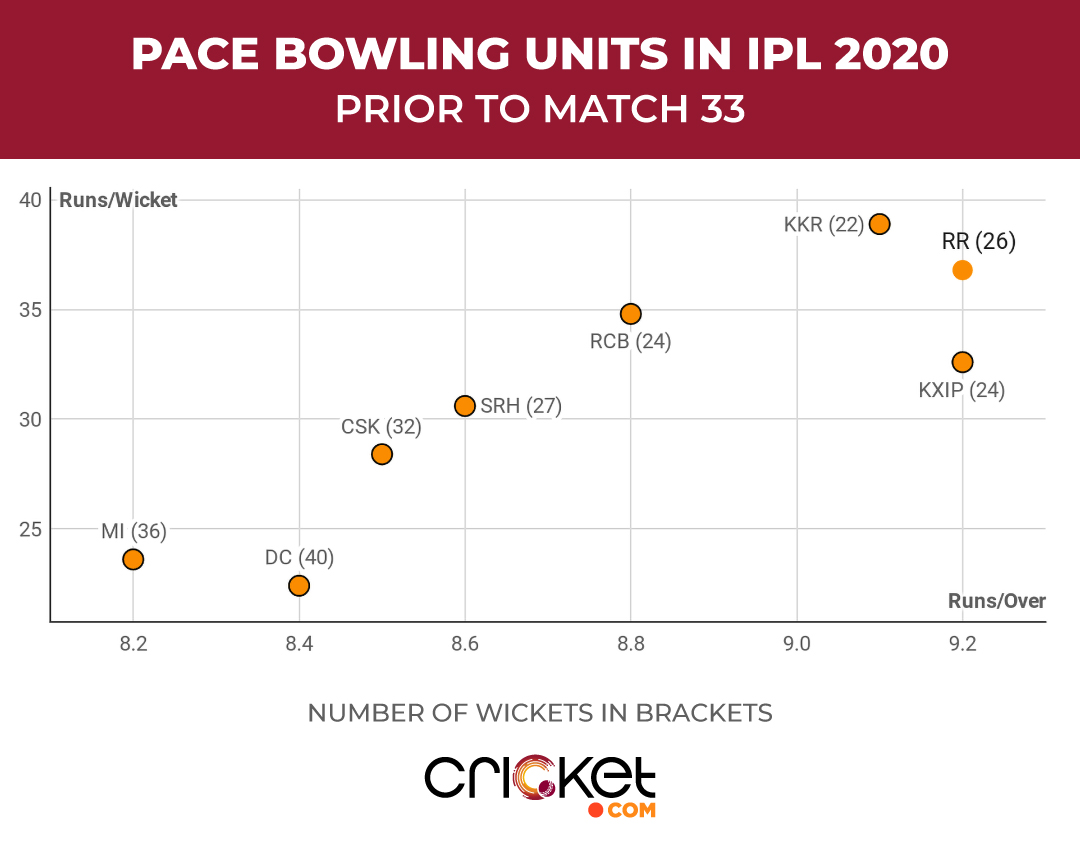 Overall, DC’s pacers have taken the most number of wickets in the competition till now with the second-best economy-rate. Rabada has extended his merry wicket-taking streak to 22 IPL games. The likes of Harshal Patel, Tushar Deshpande and Stoinis have chipped in as well.

The success of the pacers doesn’t mean DC are lagging in the spin department. The combination of Ashwin and Axar Patel has done wonders. Amit Mishra, before leaving due to a fractured finger, also played a key role. DC have been the best spin-bowling unit in the competition by a distance. 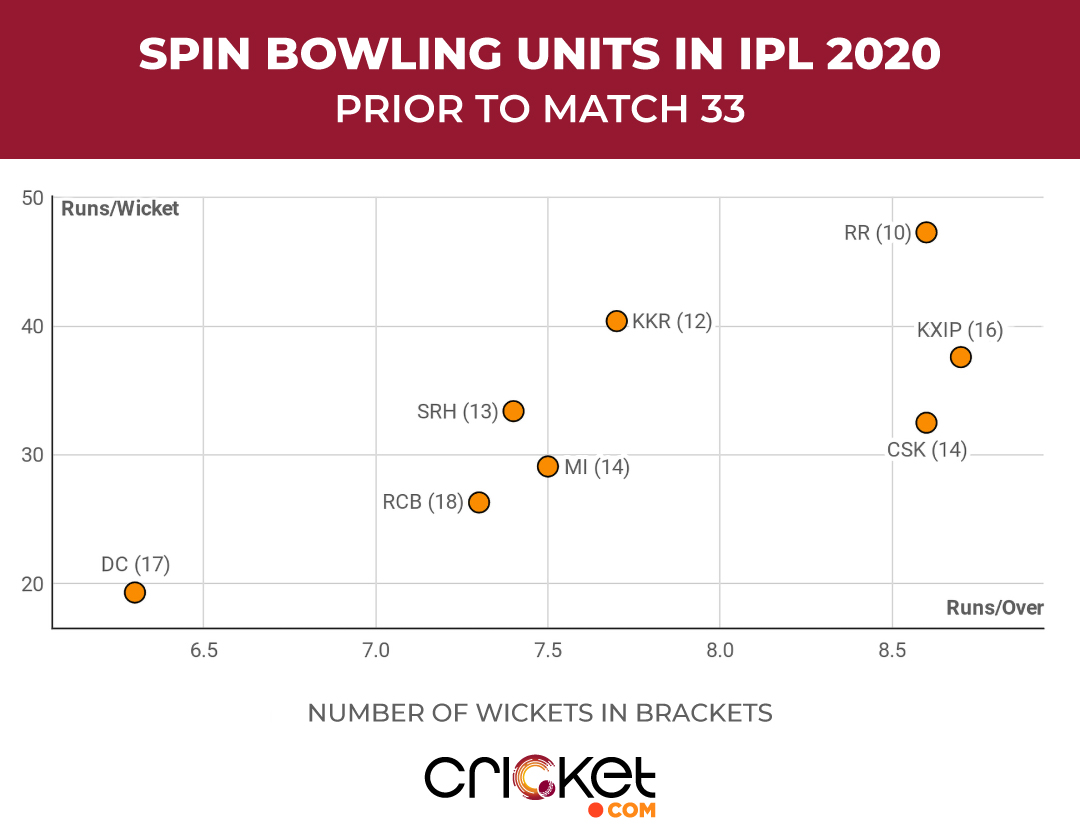 DC have keenly followed the old dictum, “Batsmen win you matches but bowlers win you tournaments”. They have won all their six games while bowling second.

DC’s top four batted 84.3 deliveries per innings in 2019 which was the third-best amongst all sides. This year, they are the sixth-best but the number has only improved going to 86 balls per innings.

Their only Achilles Heel in the batting department last year was the absence of a finisher. There has not been as many wickets during the middle-phase in IPL this year with a batting average of 34.3 - the highest in any IPL season. It has reduced DC’s dependency on a finisher. Shimron Hetmyer has not batted only 61 balls in six games which is an indication of a productive batting unit.

Hulk to the rescue

In the games where they have required a finishing touch, Stoinis has come to the rescue. In the first match, he tonked Chris Jordan for 30 runs in the last over. Against Bangalore, he struck an unbeaten 53 from 26 balls lifting DC to 196. 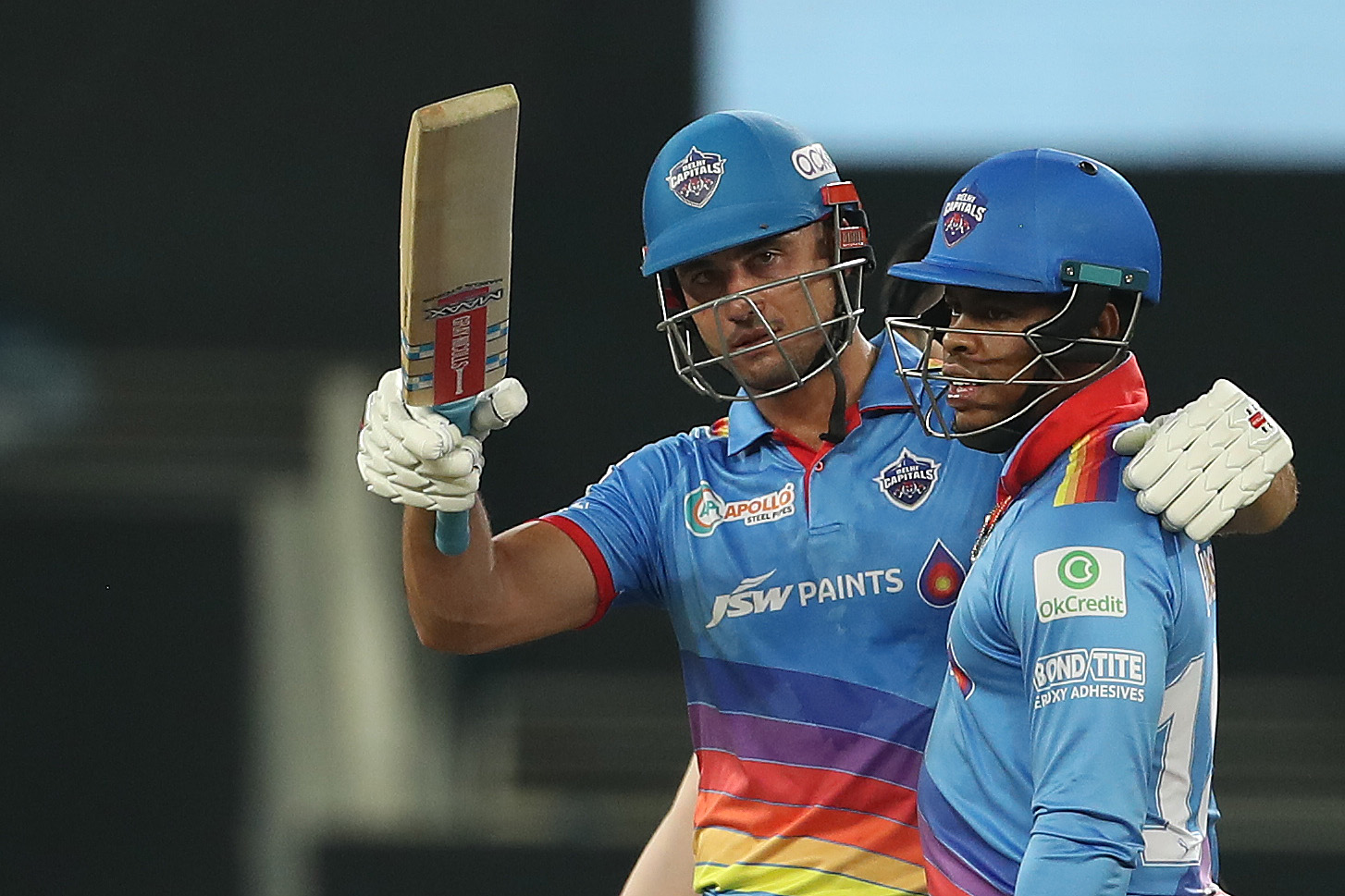 Amongst batsmen who have taken the finishing job (number five and six) for Delhi in previous editions, his strike-rate of 162.2 is second only to Rishabh Pant’s 170.8 in 2019 (minimum 100 runs in a season). An average of 32.2 is a further plus-point. He may not be in the league of Kieron Pollard and AB de Villiers but Stoinis is pumping DC’s batting line-up akin to his biceps.

A new hero every day

Their last three man-of-the-match award winners have been bowlers once again highlighting their strength in the department.

What is more encouraging about this fact is that their best bowler and best batsman - Rabada and Pant - are yet to win a man-of-the-match award.

DC’s campaign has hit a bump with injuries. Mishra and Ishant Sharma have flown back to India. Pant’s hamstring is a double whammy as it forces Hetmyer to sit out as well to accommodate the wicketkeeping option, Alex Carey in the XI.

With the pitches getting slower, they will miss Mishra as their only Indian legspinning option. Moreover, there is no news over Iyer’s injury who hurt his shoulder in DC’s previous game.

However, there is a silver-lining to their adding injury list. Pant will be back after a week. Carey and Ajinkya Rahane are getting crucial game time which ensures there is no rustiness amongst them if they are required at the business end of the season.

DC have shown heart by winning their second encounter against RR, overpowering the injury concerns by playing on their strength. The victory has put one foot into the playoffs’ door. They seem well placed for a top-2 finish to give them an extra bite at the cherry to qualify for their first IPL final. Although, Iyer’s return from injury will remain key to their prospects. 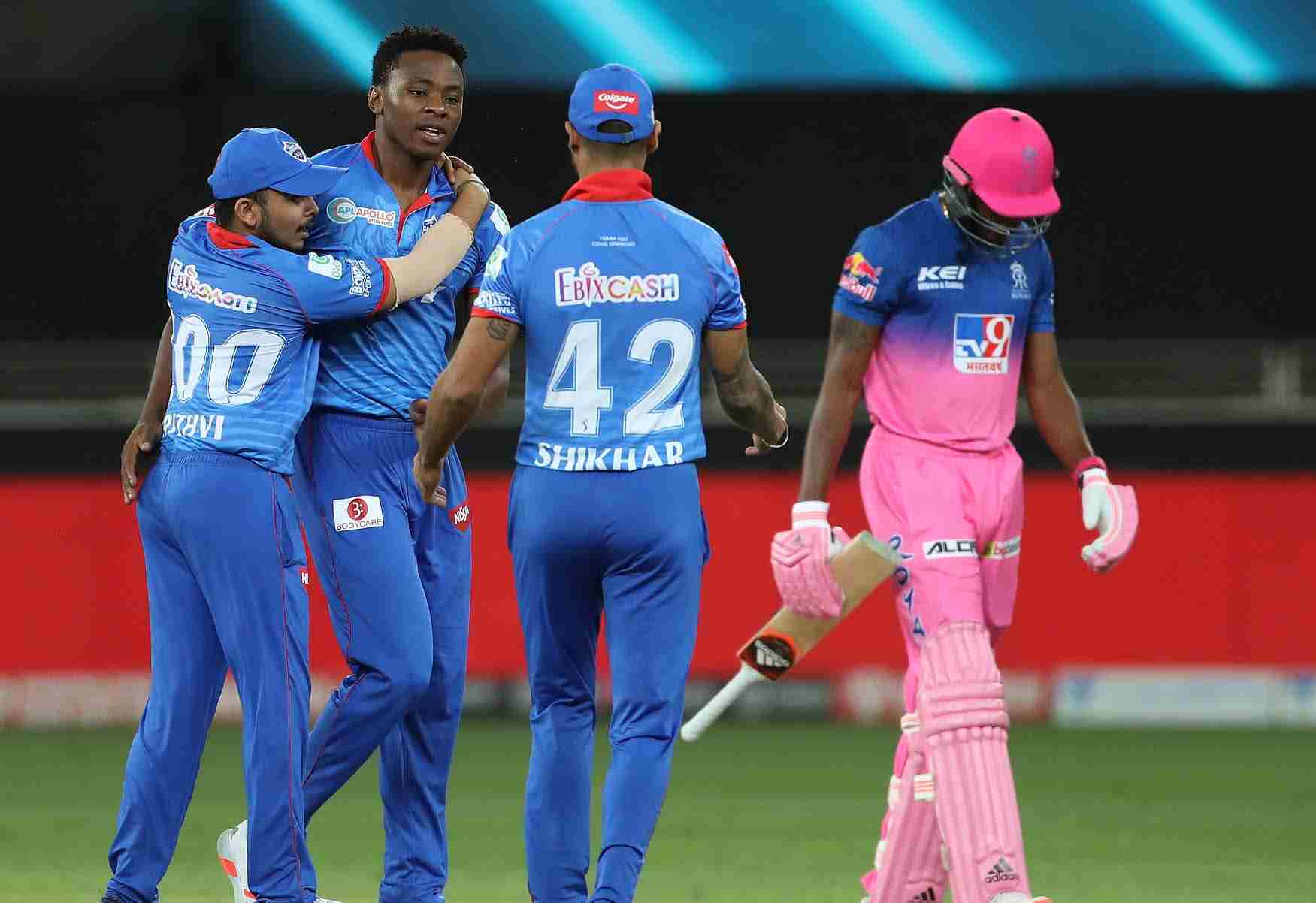