The DNA of a Winner

The DNA of a Winner

An analysis of who might go on to win the 2019 World Cup.

So who’s going to win the World Cup?

The question is central to endless speculation, fuelled by coffee, beer or other beverage of choice, before every global competition. And everyone has his “method” – some study form, others data; some go by recent anecdote, others go by gut. A camel, an octopus, a cat, a baby panda, Mystic Marcus the Pig and Citta the Elephant are among famed members of the animal kingdom that have been elevated to savant status over the years.

But what if there was a science to this?

Cricket, like any other global sport, does not stay frozen in time. The months and years before a competition are used by teams to refine old strategies, and come up with new ones. And generally, the ones who do the prep right end up winning more often than losing.

Over time, patterns develop, trends begin to emerge. And a study of these patterns, a closer examination of the trends, helps predictive analysis to an unsuspected degree.

To explain how, we look at patterns over the past two World Cups, and examine what winners did in the years leading to each summit clash – the idea being to use the past to divine the future. 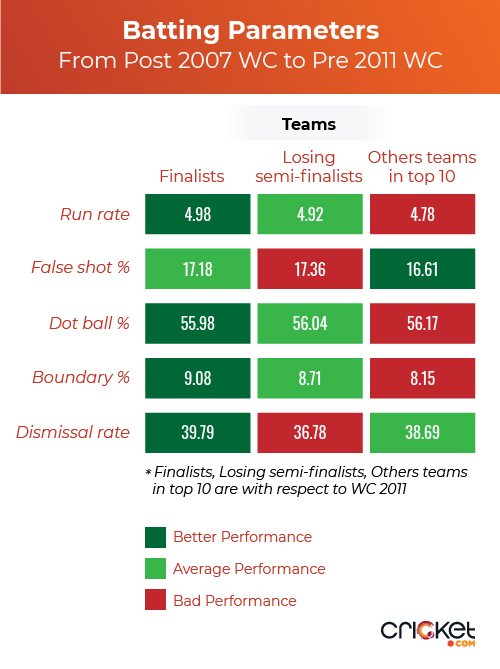 Consider the finalists: They scored faster; they played less dot balls – which is to say, they wasted less of the allotted deliveries; the boundary percentages are higher, and they lose wickets with less frequency than the less successful teams.

Consider also the false shot percentage: Teams in the top ten took fewer risks; the finalists, counter-intuitively, took more risk – a factor that can be attributed to the rise of T20s. But those risks, which could otherwise be negatives, helped the successful teams increase their run rates and score more boundaries. 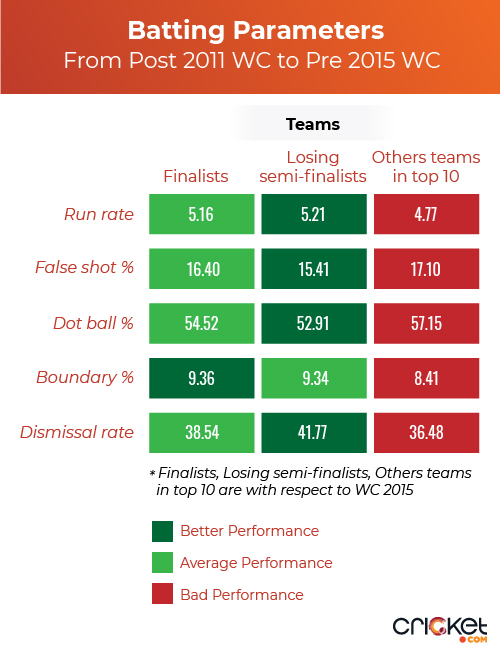 Leading to the 2015 World Cup, the good teams learned to find a better balance between rapid scoring and preservation of wickets. The false shot percentage went down, while the good teams kept their run-rate, dot ball percentage and boundary percentage high.

If this is the template of a winning team, how do the teams participating in the 2019 World Cup fare, and how have they worked on the key indices in the last four years? 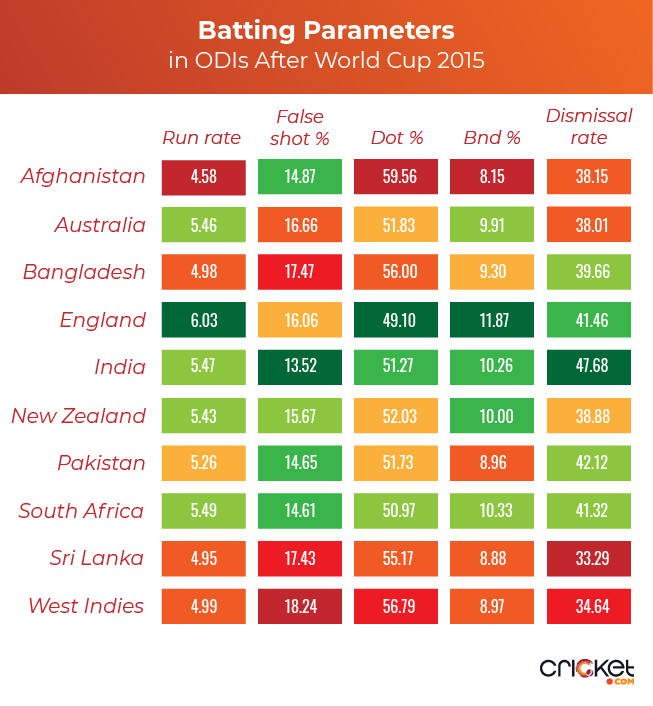 England has been best, overall, at working on the various levers that win games. Following their shock defeat in 2015, the team has worked on a no-prisoners approach of going hard from ball one; and creating a depth in batting which gives them the ability to bat fearlessly without worrying about preserving wickets.

Interestingly, though England takes risks at a higher rate than most, they have pulled it off and ensured they don’t lose wickets too frequently. The problem with this approach will surface during the knockouts, when one risk too many on one bad day can snuff out their hopes.

India comes next with, however, a contrary approach: the focus of the Men in Blue is to be more cautious than hosts England – a fact reflected in the dismissal rate. Thus, where England lose a wicket once every 41 deliveries (rounded off), India loses a wicket once every 47 deliveries, a difference of a whole over.

South Africa and New Zealand are the two other teams that fare well across the established parameters. The false shot figures for the West Indies reflects the Caribbean penchant for playing high risk cricket – when it comes off, they can produce unexpected results, but this could come at the expense of consistency.

Pakistan is way behind in terms of boundary percentage, and this factor, particularly in the middle overs, can hurt them badly. Australia’s figures need to be read with caution, since for a large chunk of time their influential batsmen Steve Smith and David Warner were absent. The Aussies already have a more than decent run rate; if the return of the prodigals helps them improve their dot ball percentage and also the frequency with which they find the boundary, they will be a force.

This is one half of the story. It’s said that batsmen win you matches but bowlers win you tournaments. So what do the better sides do well with the ball? 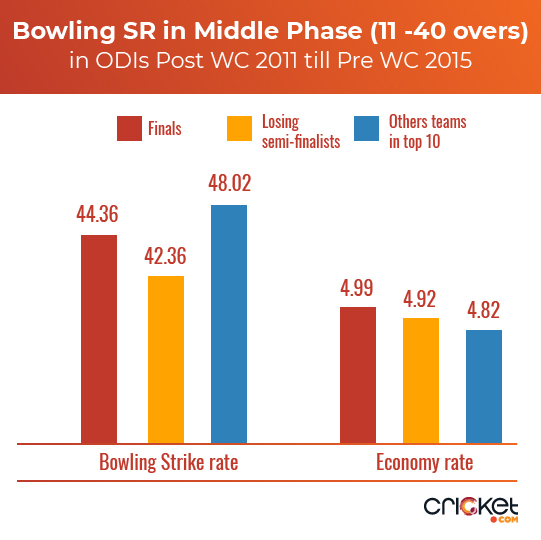 The numbers above relate to what teams have done during the middle phase of the innings (11th-40th over) in the period between the Cups of 2011 and 2015. The middle phase is crucial simply because it is the biggest chunk of the game, making up 180 deliveries out of the allotted 300. And clearly, the bowling units with the best strike rates in the middle overs have done well. 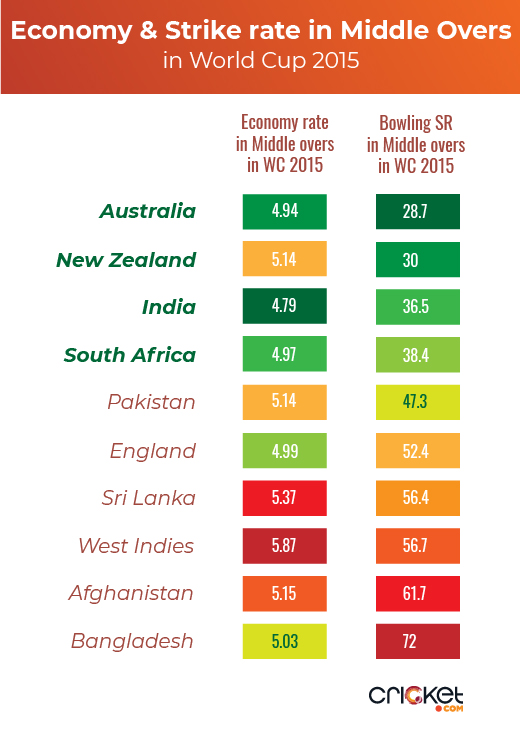 The above table, which captures the bowling performance in the middle overs, tells its own story: The best teams keep runs down, and take wickets more often, in the middle overs than the lesser sides. Note that the top four teams in terms of mid-innings strike rate ended up as semi-finalists. 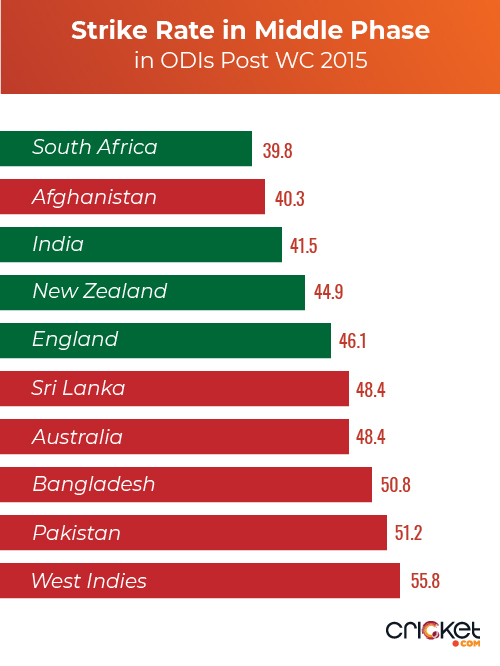 After the 2015 World Cup and till the start of the 2019 edition, South Africa has the best strike rate in the middle overs followed by Afghanistan, India, New Zealand and England.

Afghanistan’s numbers need to be read in context of the fact that they play more matches against weaker sides -- 75% of their matches in this period were against teams that are not contesting this World Cup.

Now put two and two together. With the bat England, India, South Africa and New Zealand have done better than the other six sides – and the same four are the sides with the best bowling strike rates in the middle overs.

So that’s our pick: England, India, South Africa and New Zealand to make the semis. Take our word for it. Or go ask Paul the Octopus or Marcus the Mystic Pig, if you prefer.

(With inputs from Prem Panicker and Kartik Kannan) 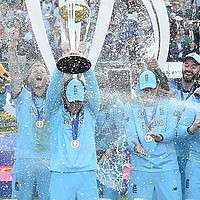