The love-hate relationship with Ajinkya Rahane 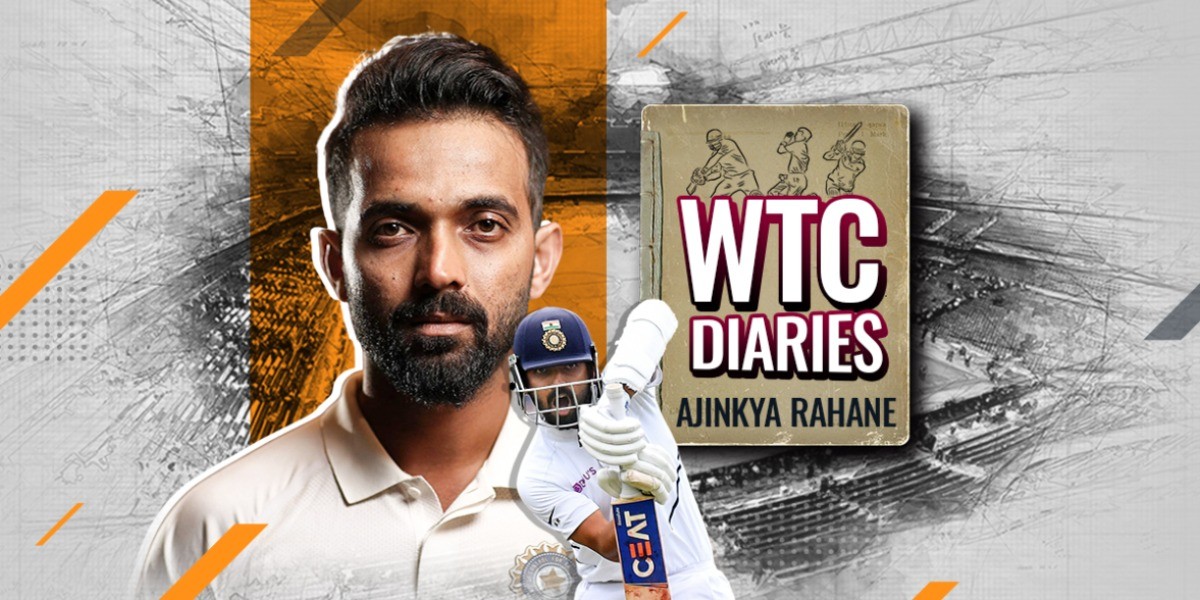 The love-hate relationship with Ajinkya Rahane

Being the highest run-scorer for India in the incumbent WTC cycle, Rahane should have an affirmed spot in the XI, but the equation is not that straightforward

With 1,095 runs in 28 innings, averaging 43.8, Ajinkya Rahane is India’s highest run-scorer in the maiden World Test Championship (WTC) cycle. He is the fifth on the overall list. One would think he has an affirmed spot in the India XI. Well, he has but the equation is not that straightforward.

During India’s last Test series, against England in February-March 2021, he was asked if he is doing enough to guarantee a spot in the Test side. His scores after an inspiring hundred in Melbourne were 22, 4, 37, 24, 1, and 0. Now, let’s rewind further to check the legitimacy of that question.

Rahane began the WTC cycle having averaged only 29.7 in his previous 27 Tests. Observing with a keen eye, one can divide Rahane’s career into three parts. 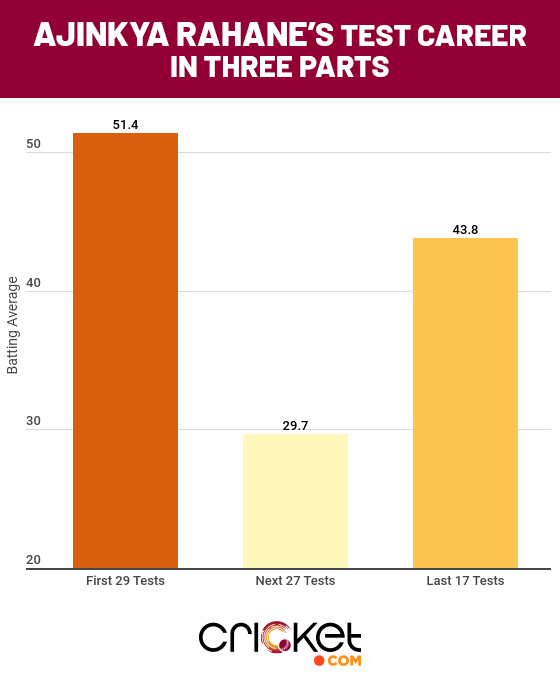 The first is where he averaged 51.4 in the first 29 Tests of his career. Rahane tackled the toughest of conditions against the most resilient bowling attacks to ascend everyone’s expectations. It was followed by the aforementioned period of stasis. His consistent failures were both inexplicable and frustrating. If you lost your patience with Rahane during this phase, we don’t blame you.

The Mumbaikar then showed signs of his old self in India’s first WTC game - the first Test against West Indies in August 2019. Walking in at 25 for three, he blunted an in-form West Indies’ bowling attack to score 81, forging crucial partnerships on the way. He steadied the ship in the second innings as well with a well-timed 102.

A couple of months later, Rahane notched up another hundred of similar pedigree - 115 against South Africa. The conditions in Ranchi that morning aided fast bowling and Kagiso Rabada was on song. Rahane walked in at 39 for three and batted with certitude, be it defence or his silken strokeplay. He took the backseat in a 267-run stand with Rohit Sharma but was at his resilient best in playing out the conditions.

India won all their five matches in these two series but in the bigger picture, the sense of the old-Rahane coming back to the horizon was one of the biggest positives.

However, it proved to be a sweet deception when India toured New Zealand in early 2020. The tour was a reminder of Rahane’s laborious efforts to get back to his blissful touch. He managed only 91 runs in four innings and ended the tour with a bizarre dismissal - dragging a Neil Wagner short ball onto his stumps while trying to paddle it fine. 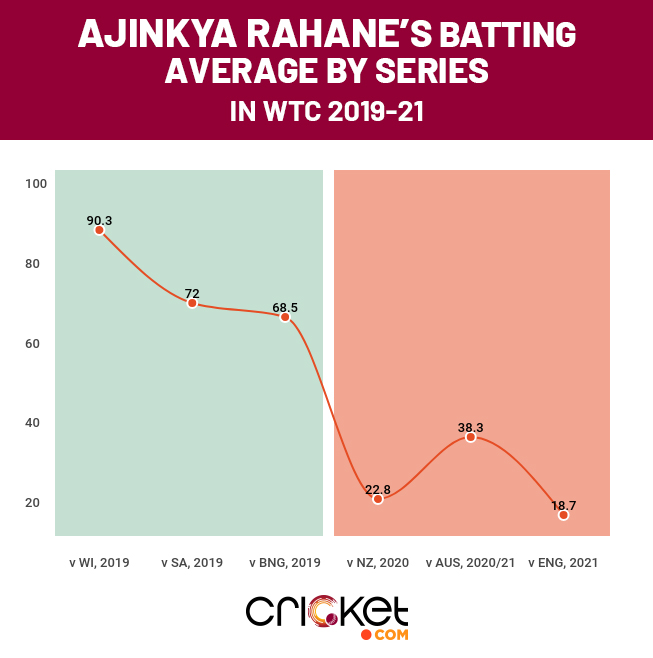 The graph has dipped then onwards. 33 batsmen have scored over 400 Test runs between January 2020 and May 2021. Rahane has produced  only two 50-plus scores in this period and has the worst 50-plus-knocks-per-innings ratio of 9.

It leads us to the said frustration again because he would get himself in and then get out. To make matters worse, a lot of these dismissals would come in an avoidable manner - the best example being his 42 in the first innings of the Adelaide Test. The right-hander had done well to reach 42 off 91 balls in tricky conditions when Australia took the new ball. It was pretty evident that Mitchell Starc will try to bring the ball back in to him. Taking the strike for the first time against the new cherry, Rahane was plumb in front of the stumps, expecting a straight ball that curved back in. It was one of those unfulfilled knocks which could not have been timed worse, especially after he sold Virat Kohli down the river in a terrible mix-up a few overs ago. 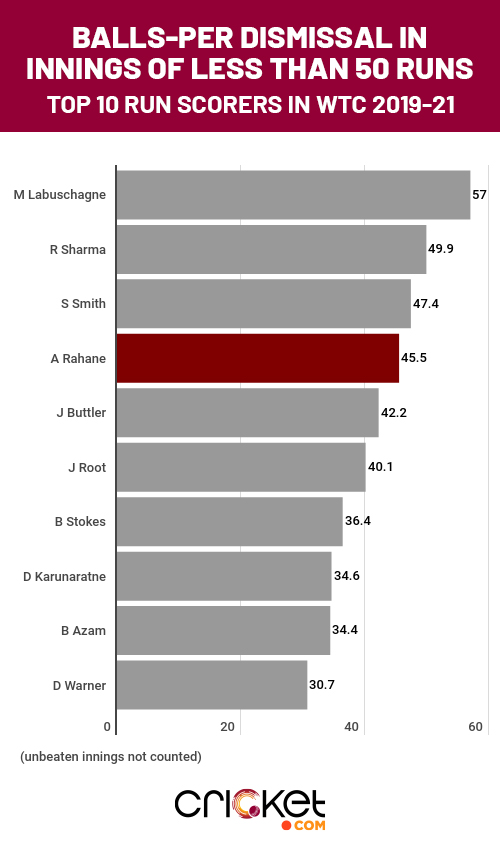 While 50s and 100s are only milestones, Rahane needs to go big. At number 5, he is the glue between the experienced Indian top-order consisting of Kohli, Cheteshwar Pujara and a raw lower-order which has youngsters rising through the ranks alongside all-rounders . When he is dismissed, India seem a wicket or two away from a collapse. Luckily, that hasn’t been the case , thanks to India’s productive lower-order. India have averaged 29.4 from number 6 to 9, the highest in the incumbent WTC cycle. In many ways, that has camouflaged Rahane’s inconsistency.

The team management’s belief in his potential to perform the disaster management duties has constantly cocooned Rahane. "I've said this many times in the past as well - along with Pujara, he [Rahane] is our most important Test batsman. We have believed in his abilities for a long time now and he's an impact player”, said Kohli during the home series against England earlier this year. Rahane’s spot has been a popular question that has received the same answer which now sounds like a broken record.

His 112 at the MCG is one of the most memorable match-winning overseas knocks by an Indian and added another chapter to his conquests away from home. But nothing around it is not acceptable from a batsman of his demeanour. 28 to 32 is considered to be a golden period for a batsman but Rahane’s average has dropped considerably in this period, from 51.4 to 41.3.

Has Rahane been bad for India? NO. But could he have done better? Definitely YES. The question is, for how long can Rahane continue to occupy a spot without being at his best. The question stands tall while representing a country like India which has a bottomless quiver of young batsmen knocking at the selectors’ doors.

Having said all that, he is inarguably India’s best bet at number five heading into the WTC final. There is no better occasion for the genesis of a more consistent Rahane. There have been batsmen with a delayed golden period. Having turned 33 last week, the Indian team and the fans will hope that the best of Rahane is yet to come.