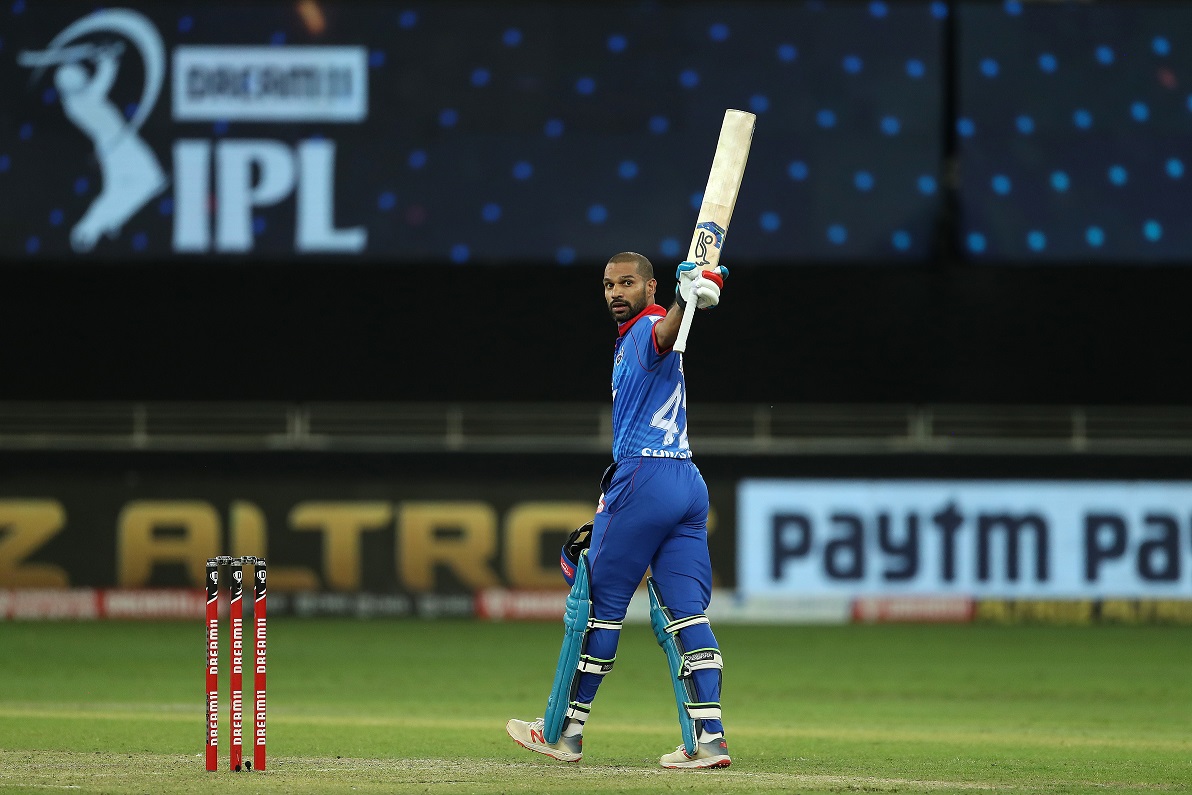 T20 is the most difficult format to assess the batsmen. For the bowlers, it is acceptable to be good in either of the two aspects – taking wickets or being economical. But, for the batsmen, earning cricket’s ultimate currency – runs - is not enough. Even the biggest knock of the match in terms of runs can be a match-losing one if not scored at a rate better than the average run-rate of that game.

In the IPL this season, KL Rahul was head and shoulders above all batsmen in terms of net runs. He finished with 670 runs, 52 runs more than the next-best Shikhar Dhawan playing three innings fewer. But, was he the most impactful batsman in the season? Especially when these runs came at a strike-rate of 129.9 that is lower than six other top-10 run-getters in IPL 2020.

In cricket.com’s feature criclytics, there is a report card for each of the 60 games in IPL 2020. Included in this are the MVP batting and bowling points awarded to each player based on their contribution in a particular match.  One way of assessing the best batsmen in this year’s IPL would be to gauge them by the net MVP batting points that each one of them accumulated throughout the season. However, when it comes to assessing the most impactful batsmen, this approach might not work for two reasons.

Number one – There will be a bias towards the batsmen who did not play all matches. E.g. since Dhawan had 17 innings with the bat, it is easier for him to collect more points. On the other hand, since Ishan Kishan played only 13, he will miss out, which he does as he is 11th on the list of players with highest MVP batting points in IPL 2020.

Number two – It is possible for a player to just be better than the average in most games and keep accumulating points to finish higher than a lot of other players. This will be irrespective of the number of high impact knocks he played in the season that made the difference for his side. Shreyas Iyer is one such example. He is sixth on the list of players with highest MVP batting points this season, but how many high impact knocks do you remember him playing? With a strike-rate of 123.3 this season, it is fair to say: not many.

There is no other side that has cracked the code of T20 cricket quicker than the Mumbai Indians. This reflects in their results. The key to their squad is having a bunch of players with the ability to win a game on their own. If six players within a team put their hands up to win two games each, the side will win the trophy in most seasons.

Coming to the crux of the argument, to identify the batsmen that had the most impact in IPL 2020, let us look at the players who finished as the best batsmen in a match on most nights. Using this as a parameter, here is the list of cricket.com’s most impactful batsmen in IPL 2020- 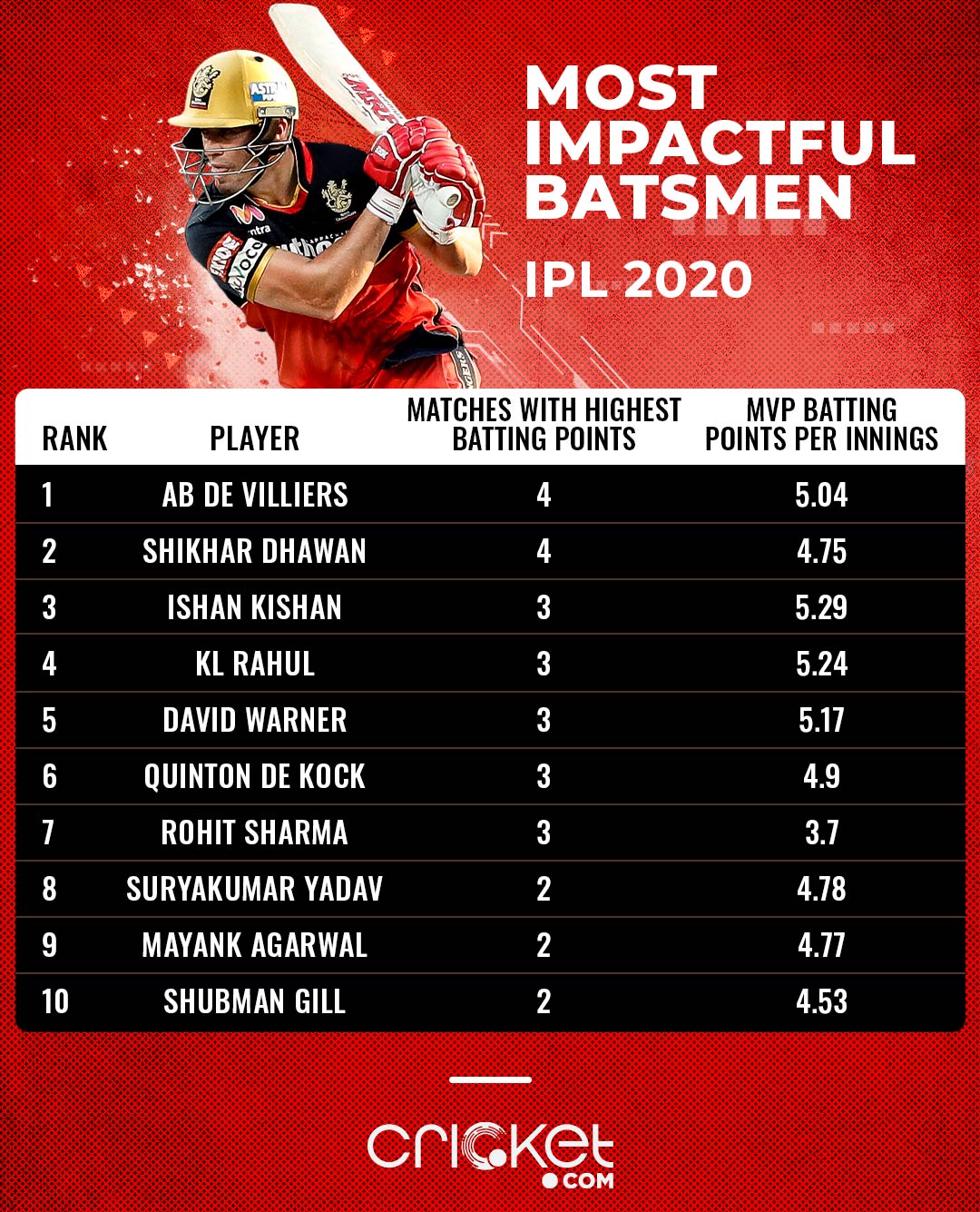 As both AB de Villiers and Dhawan finished as the best batsman on the night on four occasions, we have used the MVP batting points accumulated per innings as the tiebreaker.

This list gives us a better idea about the batsmen who not just scored big runs in the tournament, but those runs mattered for their side and in the match. Now, all these knocks need not be match-winning as there can be other factors at play but they were the best in a given match.

The leader of the pack, de Villiers, played a blinder against Jasprit Bumrah and co in Match 10 of the IPL. Then, he seemed to be batting on a different pitch against Kolkata at Sharjah. In the latter half of the tournament, he demolished the Royals on his own. With a little help from others and if not for Kane Williamson’s astute counter-attack, de Villiers could have carried RCB to the qualifier as well.

Not far behind was Dhawan who apart from his twin hundreds was Delhi’s match-winner with the bat in the Qualifier 2 as well against the Royals in Match 30. He also finished second in the list of highest MVP batting points in IPL 2020.

In what can be his breakthrough season, Kishan finished with the record of best batting points per innings. Not only did he hit the most sixes in IPL 2020, but he was also the best batsmen on the night on three occasions. Twice against Delhi, in the first qualifier and Match 51, and once against Chennai while opening the batting in Match 41.

In most of his knocks this year, Rahul had a strike-rate below the match run-rate. But, whenever he was more aggressive, twice against RCB and once against MI in the historic twin Super Over game, he was the best batsman in the game and a match-winner for his side.

Wrapping up the top-5 is David Warner who also leads the pack on highest MVP batting points accumulated in IPL 2020. Getting better as the tournament progressed, Warner was the best batsman in three matches including the all-important last league game against Mumbai Indians.

It is a surprise to see Rohit Sharma in the list who is 28th on the list of highest MVP batting points. But, whenever he delivered, he created a difference. His high impact knocks came against MI’s second and fourth game against KKR and KXIP when they were playing after a loss in their previous game. He was also the best batsman in the final.

This analysis also rewards players like Mayank Agarwal who spent some time on the bench due to injury and could not finish among the top run-getters. 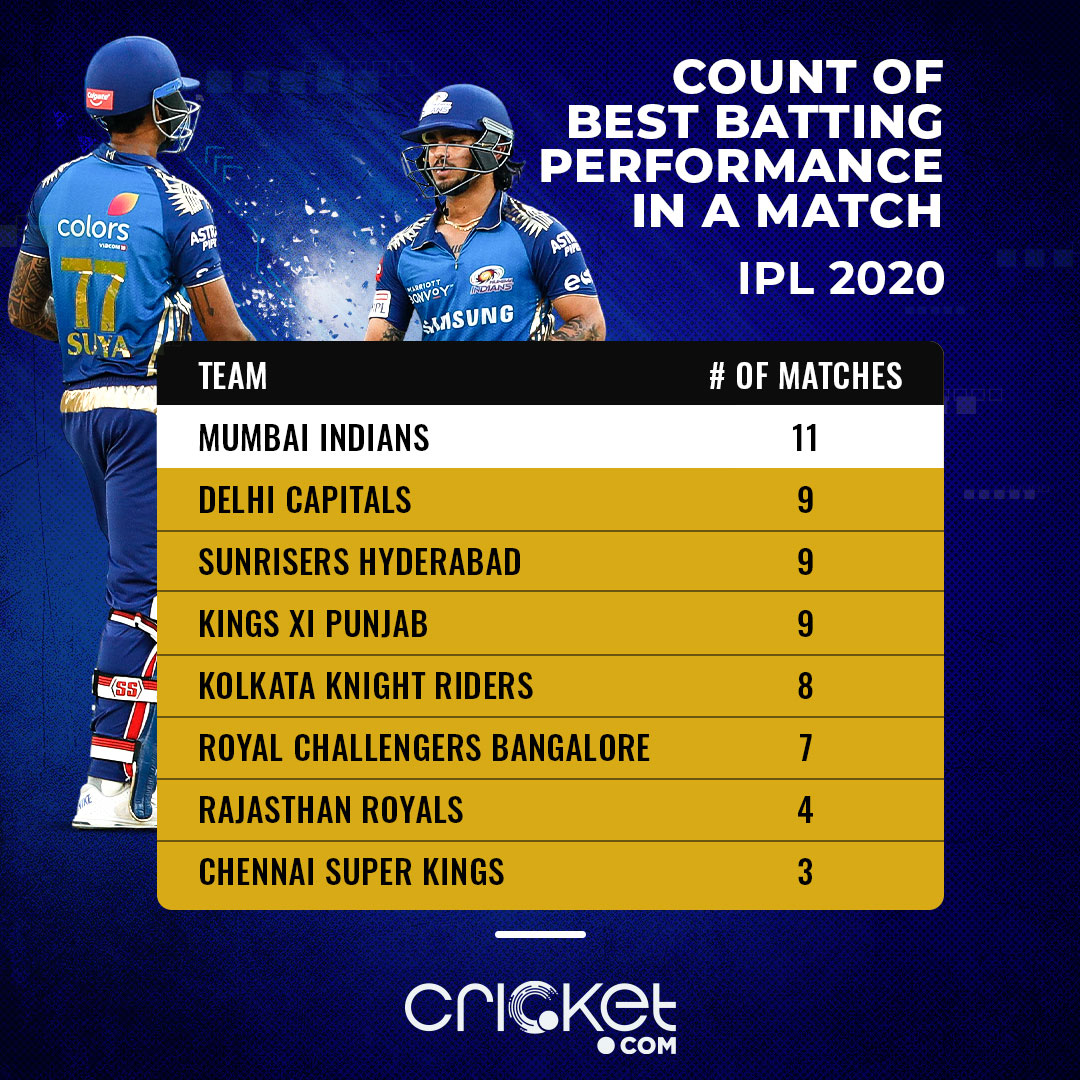 Looking at the top-10 list, it is easier to understand the dominance of MI in this year’s IPL. All four of their top-order batsmen find themselves among the most impactful batsmen this season. Overall, an MI batsman was the best batsman on the night on 11 occasions, the highest among all teams.