The playing XI puzzle for England's Test side

The playing XI puzzle for England's Test side

10 out of the 14 players that England announced for the first Ashes Test had a first-class hundred to their name and the other four had 26 fifties between them. Over the last few years, England built a proficient lower order that has put in crucial batting contributions. Since 2015, their lower order (number 7 to 11) averaged 22.8 runs per wicket in Test cricket. Only New Zealand did better. Hence, it was quite inexplicable when England did not show enough confidence in their lower order, naming both Jason Roy and Joe Denly in the XI for the Edgbaston Test.

It came at a cost. Both Jofra Archer and Sam Curran had to warm the bench. England’s fast bowling mitochondria lied in James Anderson, Stuart Broad and Chris Woakes - the same trio of fast bowlers who formed the fulcrum of England’s pace attack during Ashes 2017/18. England coach Trevor Bayliss then said, “(their bowlers) did not have a clue” against the Australian batsmen because of a one-dimension pace attack. In the Edgbaston Test, with Bayliss still holding the coaching role, England went in with the same monotonous fast bowling attack despite having Archer and Sam Curran at their disposal.

Yes, it was tough to omit any one of Anderson, Broad and Woakes from the XI knowing the kind of mayhem they can cause in English conditions and Archer had a niggle but with the option of adding the variety of Curran’s left-arm angle, England, instead, went for an extra batsman. What made the decision more baffling was the fact that Curran had averaged higher with the bat than most of England’s top batsmen.

Once the action begins on the field, there are certain aspects which are beyond human control. Your team can come up against an invincible bowling spell/innings, a key player of your side can get a wrong decision from the umpire but one controllable facet of the game is getting the XI right. England, being an elite Test nation, have fallen behind in that aspect quite consistently. Throughout the Ashes, England kept making major changes to their balance and after the conclusion of the series, one may still question if they have found their perfect XI.

Anderson’s calf strain allowed Archer to make his debut in the second Test at Lord’s. And Archer left his mark on the series straightaway, rattling the Aussies with his pace and bounce.

In a memorable duel with Steve Smith, he hit the former Australian skipper on his neck. Archer may not have got him out, but the blow to Smith’s neck played a part in him being dismissed for his first sub-100 score in the series when he looked set for his third hundred in a row. In the second innings, he picked three for 32 allowing England to dominate the game on the last day.

It took long but England finally found pace in their attack, something they had been yearning for. In the third Test at Headingley, England did not have to alter their XI. However, they still had some major changes to make, especially when it came to reshuffling their middle-order.

Jos Buttler who had batted and struggled at number five in the first two games was pushed to seven, Ben Stokes moved from number six to five while wicketkeeper-batsman Jonny Bairstow was moved to six. It took two Tests for England to realize that number five is too high for Buttler whose prominent job should be to bat with the lower order and augment the team’s total, instead of grinding at five. 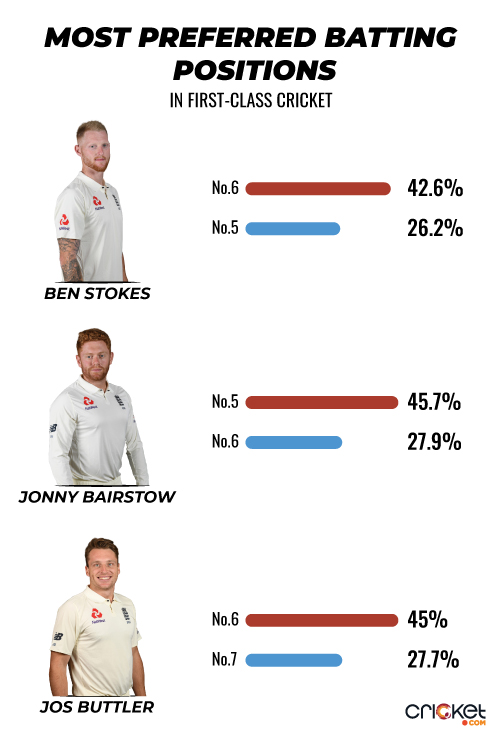 The problem exaggerates with two wicketkeepers - Buttler and Bairstow - in the same XI. Having batted majorly at five, Bairstow should be an automatic choice for that spot in the Test side. On the contrary, he wants to bat at seven and retain his place in the team via wicket-keeping duties. Meanwhile, Buttler has batted for most of his first-class career at six followed by number seven. There should have never been any question on their batting positions.

In the fourth Test, England replaced Woakes with Craig Overton. But the more noticeable change in their balance was Roy and Denly swapping batting positions. Before the series, Australian pacer Josh Hazlewood had raised questions over Roy’s selection as a Test opener. He took the example of Aaron Finch’s struggle against the moving ball even in ODI cricket which translated to Test cricket. It all came true when Roy managed an average of only 8.85 while facing the new ball, the lowest by any England batsman who has opened in at least five innings.

Yet, England were adamant to keep Roy in the XI, this time by playing him at four and pushing Denly to open the innings, who had opened just once in county cricket in the last four years. Roy showed some resistance, scoring 22 and 31, before being bowled through the gate twice in the match.

By the fourth Test, it was clear that England still hadn’t figured out the right bowling line-up, were not sure about the apt batting positions in their middle-order and had no clue about who their top four were. Except Rory Burns as the first-choice opener and Joe Root at three, who actually has preferred to bat at four throughout his career, everybody moved around.

In the fifth Test, England came close to their best possible XI. That too was triggered by the injury to Stokes’ shoulder, which forced England to consider Curran to fill up for Stokes’ bowling duties. As a result, they had to drop Roy and promote Stokes to four. Subsequently, Bairstow batted at five and Buttler scored 70 and 47 in the game batting at six, both innings came at a strike-rate in excess of 70.

Number seven might be one spot too high for Curran, but he left his imprint with the ball. He scalped three for 46 in the first innings picking Matthew Wade, and then dismissing Tim Paine and Pat Cummins off successive deliveries which derailed Australia’s innings. Moreover, he troubled Steve Smith straightaway, even threatening to swing the ball through his opened up stance a couple of times in his first spell against England’s biggest headache in series.

As stated above, the fifth Test was the closest England came to playing their best XI in the series. Not surprisingly, this was the only game in which they were able to dominate Australia throughout. Yes, Paine electing to field first helped but let’s be fair, even the visitors were not at their best and their campaign was largely driven by four players in the series - Smith, Pat Cummins, Hazlewood and Marnus Labuschagne. In the fifth Test, with the right set of players playing at the right positions, England were finally able to take advantage of Australia’s mistakes and level the series.

Curran has now played seven Tests at home and England have emerged victorious in each one of them. His batting average in Test cricket is currently better than his bowling average. In an ideal world, such cricketers are undroppable. England, somehow, keep dropping him, more surprisingly in England, to accommodate more star names.

There are also dark clouds lingering over the role of Bairstow and Buttler. The only reason that Bairstow keeps wickets in Test cricket while Buttler performs the same duty in the shorter formats is that the former was a regular in the longer format before Buttler. It’s time to keep seniority aside, hand the gloves to Buttler asking him to perform the role that Adam Gilchrist did for Australia and persuade Bairstow to be the batsman at five he was always believed to be, even if that comes against his will. If the word on the street holds relevance then this is what is going to happen when England tour New Zealand in November.

But the biggest obstacle in front of the England management is not be too fazed by their ODI success which saw a Test debut for Jason Roy. While batting averages in ODI cricket are escalating to unprecedented heights, the same figures in Test cricket are reducing with every series. It was never Roy’s fault that he got to play Test cricket but an error on the part of the management and selectors who failed to notice the contrary patterns in both forms of the game.