The transformation of KL Rahul the Test batsman 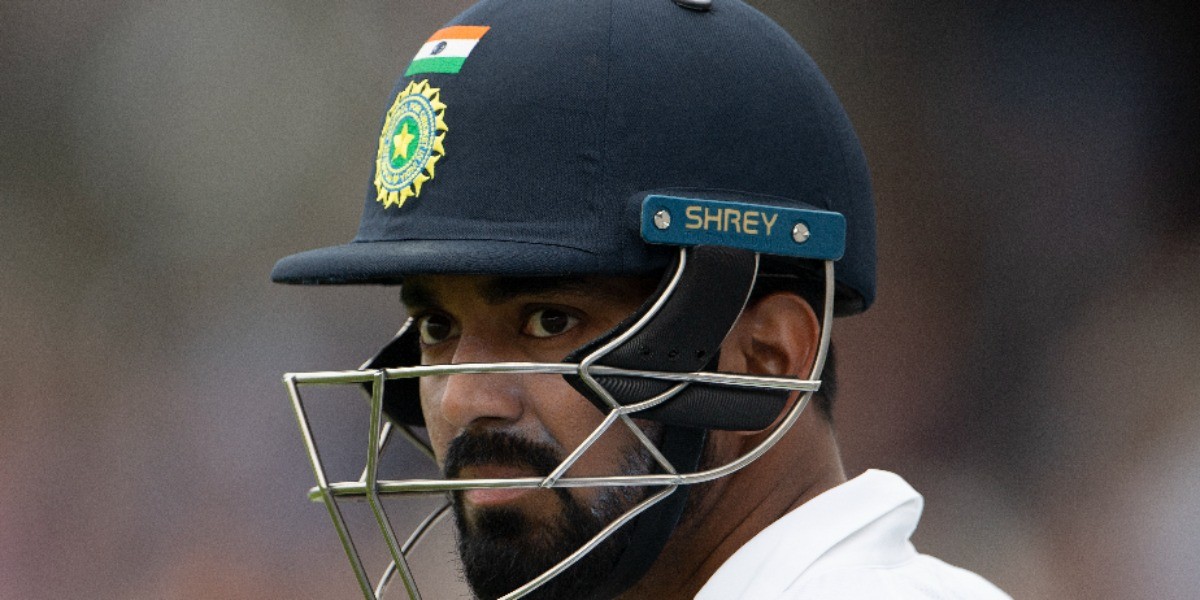 The transformation of KL Rahul the Test batsman

When life gives you a second chance, make sure that you do a KL Rahul.

Six months ago, when it was revealed that Rahul, in the absence of Shubman Gill and Mayank Agarwal, would be partnering Rohit Sharma up the order in England, the world feared the worst.

Upon hearing the name ‘Rahul’, nearly everyone pictured the batsman from two years ago that was a sitting duck against the red-ball.

However, the universe was in for a wild but pleasant surprise.

Tight in defence and more disciplined than ever, the Karnataka batsman unleashed a never-seen-before, transformed version of himself that not just floored England, but everyone who tuned in.

In a series where most batters were walking wickets, Rahul stood out, finishing as the third-highest run-getter, holding his ground against an English attack tailor-made to ravage batting units at home.

Any suspicion of the England series being a false dawn was shattered in the first Test against South Africa in Centurion, where he delivered a Man of the Match performance to firmly cement himself as one of the first picks in the Test side.

Rahul’s talent has always been unquestionable, but even for a player of his ability, this 180° transformation has been a sight to behold.

We decode what has enabled this transformation, and try to make sense of how Rahul has now become the epitome of discipline and solidity, unrecognizable from the pushover that he was three years ago.

A new-found penchant for leaving

In his very first knock upon returning to the side, Rahul took everyone aback. In testing conditions at Edgbaston, he faced a staggering 214 balls and was resolute at the crease like never before.

The hallmark of that knock was how well and just how much he left the ball - Rahul left alone 36.4% of the 214 balls he faced. The approach provided him instant success and since then, leaving the ball has pretty much been the bedrock of his Test game.

Since his comeback to the Test side, Rahul has left alone 31.20% of the balls he’s faced. No other batter during this period has left the ball as much as him, with Marnus Labuschagne (29.80%) being the second highest. 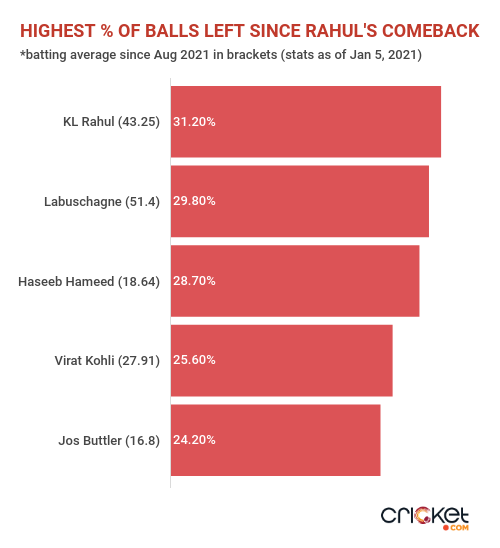 Crucially, unlike most of the batters in this list, Rahul has made the leaves count, using it as a base for his innings. In the 123 he struck in Centurion, Rahul left 37.3% of the first 150 balls he faced.

To leave the ball more often is certainly a conscious approach he has adopted. Prior to his comeback to the Test side, Rahul left just 21.8% of the deliveries in games he played outside Asia. Since last year, there has been a 10% rise.

In the aftermath of the first Test, Rahul himself revealed how he is now ‘enjoying’ letting balls go.

"It's something that I'm enjoying doing a lot, to be honest, and that's the key to Test cricket - you need to enjoy leaving balls outside the off stump," Rahul said.

"The mistakes happen when you get bored of doing the same things, but for me I've tried to enjoy leaving balls outside off stump, enjoy playing the defensive shots, enjoy tiring the bowlers out at times. That is what is expected out of me as an opening batter for the team.

Leaving the ball, however, is just a part of the reconstruction he’s done to his batting. Overall, Rahul has noticeably curbed his aggression since returning to the side last year.

This current, transformed version of the Karnataka man, though, couldn’t be farther away from the term ‘loose’.

Just how much Rahul has consciously curbed his aggression can be seen from the sheer discipline he’s shown early in his innings.

What’s been most impressive, though, is his off-stump awareness. Since his comeback to the side, Rahul has been impeccable in his judgement - almost never chasing anything outside of one particular ‘zone’.

In a montage on the morning of the first day of the second Test, the host broadcaster showed how Rahul’s bat almost never goes out of an imaginary rectangle that’s close to his body.  He’s trained his mind and body to not go chasing unless and until the ball falls under the ‘accessible’ area. This approach yielded him success first in England, and now in South Africa. 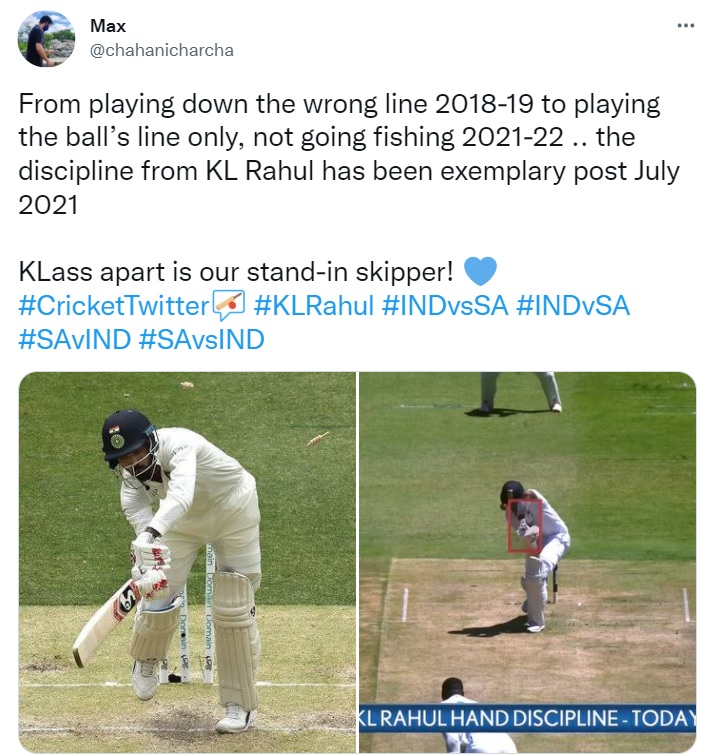 What seems an obvious approach has been a conscious decision taken by Rahul after consulting with his childhood coach upon his selection for the tour of England.

“Before the England series, we had a conversation. I said ‘Do you remember the three hundreds you scored for U15s?’ He just said one thing – ‘That means I have to play close to the body. That is all, sir’. That is all. He understood,” Rahul’s childhood coach Samuel Jayaraj recently told Wisden.

That Rahul is now able to do everything mentioned before is down to the fact that he’s completely remodeled his technique. KL Rahul the Test batsman the world has been witness to since last year is completely different from the Rahul that donned the whites three years ago. Quite literally.

He now has fractionally opened up his stance, does not move too far across and takes minute steps towards the right (with his left foot) as the bowler approaches. His head no longer falls over, he is perfectly balanced and he stays in a strong neutral position that allows him to make the right decisions.

According to JP Duminy, his strong off-stump positioning has made all the difference.

“I think what has been noticeable for me, having played a little bit against him, is the shift on to the off-stump,” Duminy tells Cricket.com.

“It has certainly given him the mindset and belief that he has got to back his straight game so he has the ability to hit straight down the ground whenever the line of the ball is hitting the stumps. He has always been strong on his legs. He’s relying on the fact that he is in a strong position on that off-stump, so anything on his legs he’s going to be clipping.

“We’ve seen in the past that outside his off-stump is where he’s been vulnerable. So he’s gone on to his off-stump and has basically told himself that anything outside my eyeline around my right side, is an opportunity to leave the ball pretty well.

“In Test cricket, one of the fundamentals for the opening batter is to make sure that you have a strong defence. He has made sure that he’s solidified the technical side of things.” 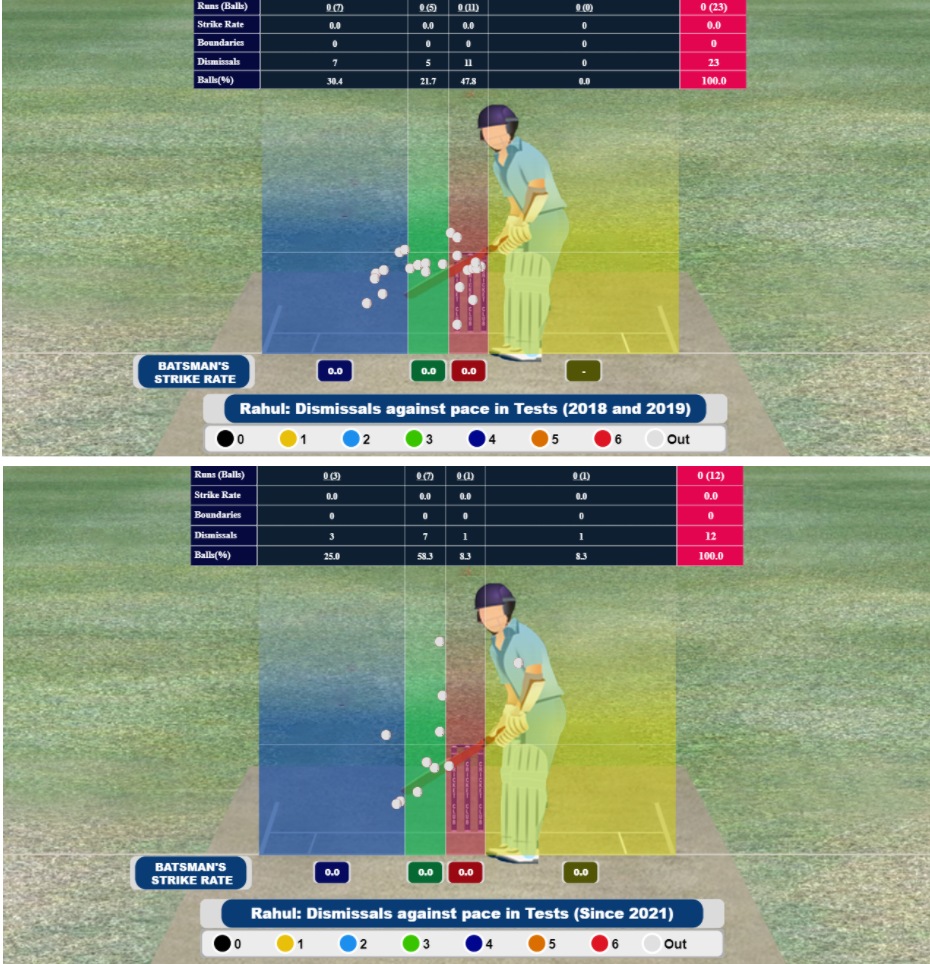 As evident from the beehive comparison above, this alteration has helped Rahul completely weed out dismissals against balls in the third and fourth stump channel.

It has also helped him completely eliminate LBWs, something that was his Achilles Heel three years ago. Between 2018 and 2019, Rahul was dismissed bowled or LBW 14 times in 27 innings (51%). Since the technique remodel, he’s been out LBW just once and he averages 49.8 vs the balls coming in to him.

Naturally, this peak won’t last. With time, there will be chinks in Rahul’s armour that teams will identify and exploit, and it might even get to a point where he might need to another remodel.

For the time being however, credit has to go to Rahul for reinventing himself to the extent that he is unrecognizable from the version we saw three years ago. Just who would have thought?