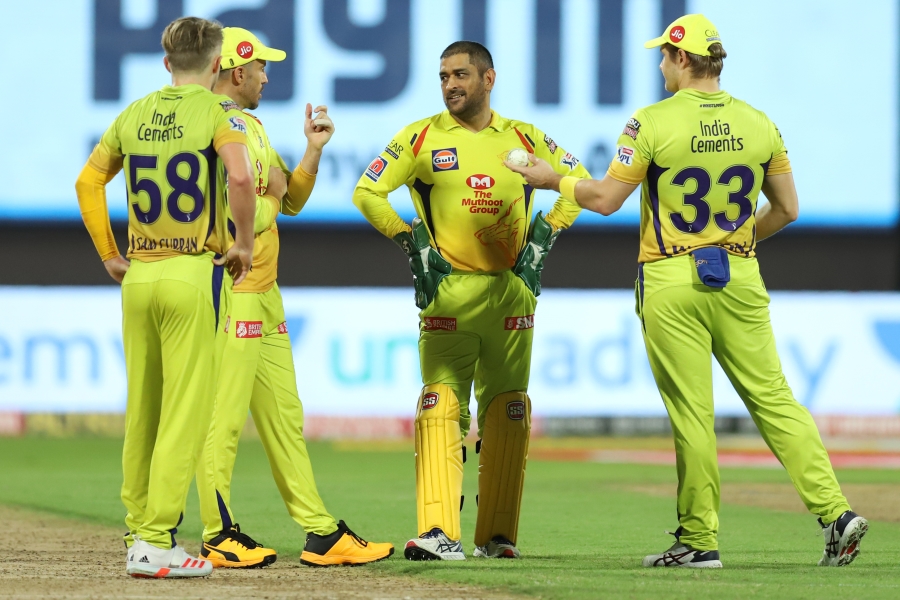 2020 really is strange. Who would have thought that 10 matches into the competition, Chennai Super Kings would be placed last on the points table having secured only 3 wins? A team led arguably by the greatest white-ball captain India has ever produced and consisting of players who have tasted victories across the international circuit now face the genuine prospect of not qualifying for the playoffs of the IPL for the very first time in their existence.

The cracks are visible, the leadership is being questioned, and suddenly the Dad's Army is looking jaded, lost and stuck.

Before jumping to any sort of conclusions, let's first see where CSK stand currently and what their chances of going ahead are. At the time of writing, Chennai are at No.8 on the points table. They have 4 more games to go:

In a perfect world, Chennai will want to win all 4 of their encounters, finish on 14 points and aim for some help from other teams to qualify into the playoffs. Realistically, their chances are very slim especially considering 2 of their next 4 games are against Mumbai and Bangalore, two teams that have hardly put a foot wrong in this tournament.

Chennai did not have the kind of pre-tournament preparation as they would have liked. Before the start of the tournament, there were major issues. 13 members of the squad, including two players, Deepak Chahar and Ruturaj Gaikwad, tested positive for COVID-19. Suresh Raina then returned home from UAE citing family reasons while Harbhajan Singh too pulled out. In addition, Dwayne Bravo was injured for a chunk of the tournament which meant the balance of the side went totally awry.

Despite the reasons, Chennai still had a decent side, yet they have floundered. Here, we take a look at some of the reasons behind the crash.

Overs 1-6 have been Chennai’s Achilles Heel all through this tournament. Such has been their desperation that they had to send Sam Curran, a pinch-hitter, at the top in the last few matches to boost the scoring.

Their run-rate during the Powerplay this season has been 7.1, easily the worst among all teams. A major reason for this is also to do with the fact that they have not had a fixed opening pair. For the first three matches of the tournament, Shane Watson and Murali Vijay opened the batting. This did not work well for Chennai who then had Faf du Plessis to partner Watson. Other than the one innings where Watson and du Plessis put up an unbeaten 181, they failed to post a 30-plus partnership in three more games. The slow scoring rate at the top forced Chennai to open with Sam Curran. 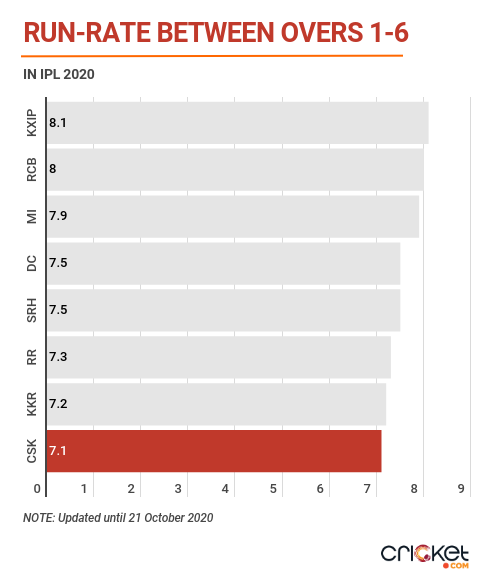 It is this indecisiveness that has hurt Chennai the most. Not having a stable top-order has meant they have not gotten those flying starts which has further put pressure on the middle-order.

Chennai have hit 140 fours this tournament so far, which is second-highest of all teams only behind current table-toppers Delhi (147). They have hit 55 sixes, which is at par with Bangalore. Their balls/boundary ratio of 6.1 is not one bit shabby. Yet, their overall run-rate in the competition so far is 8.1, the second-lowest of all teams. This is primarily down to the lack of rotation of strike. In 10 matches, Chennai have faced 429 dot balls, the second-most in the competition, just behind Kolkata. 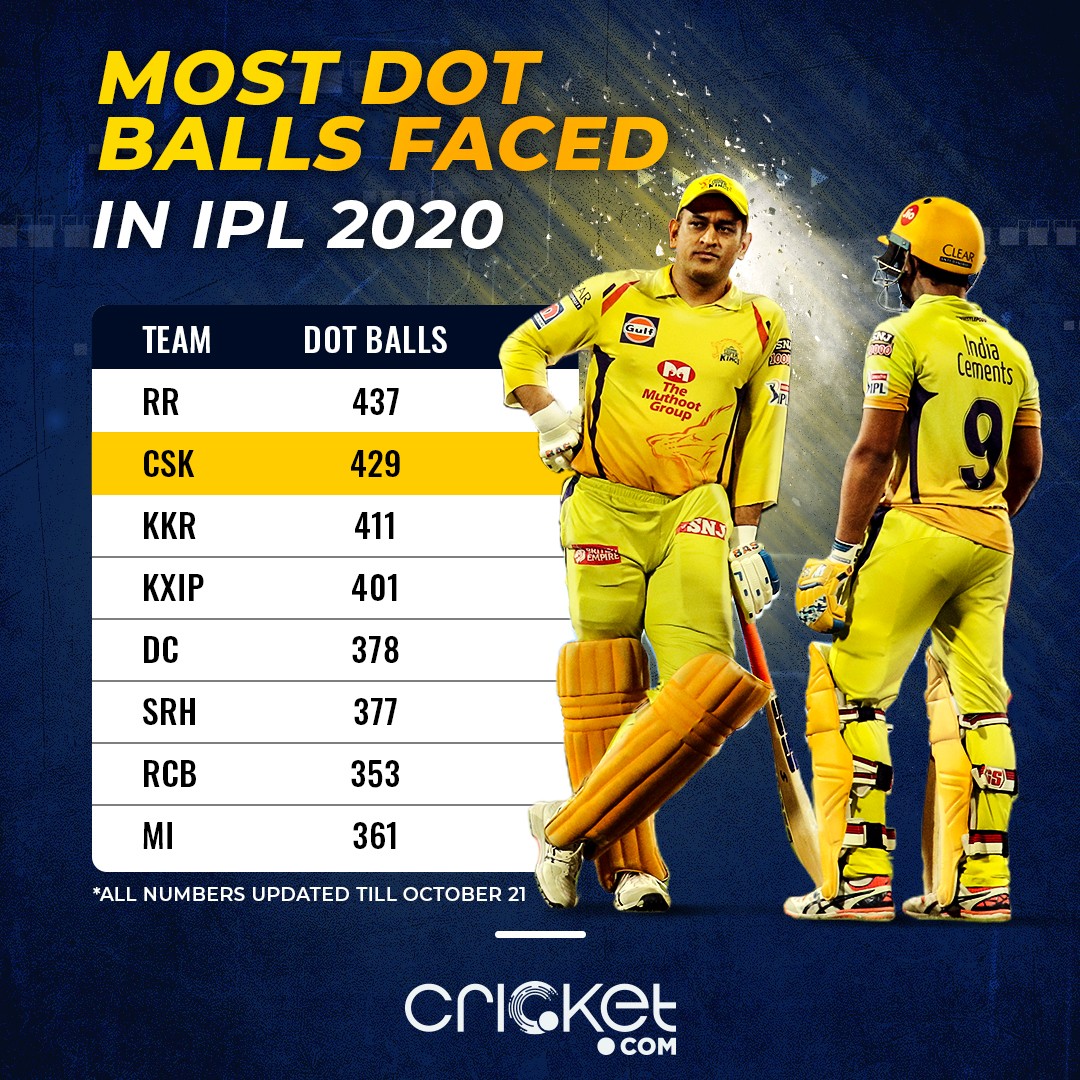 What is going on with the spinners and where is Imran Tahir?

Hindsight in cricket is a beautiful thing but it doesn’t take a genius to realize that on surfaces where spinners have been effective, one of the best legspinners in the world is yet to play. MS Dhoni, for some reason has been obstinate with his selection, especially with regards to Imran Tahir.

Chennai have oscillated between three spinners this season – Piyush Chawla, Ravindra Jadeja and Karn Sharma. The trio, to put it mildly, have been atrocious.

They have collectively conceded runs at an economy of 9.1, the most expensive in the tournament, have the least dot ball percentage (25.5), have the joint second-worst bowling average (40.5) and picked the joint second-lowest number of wickets (14). 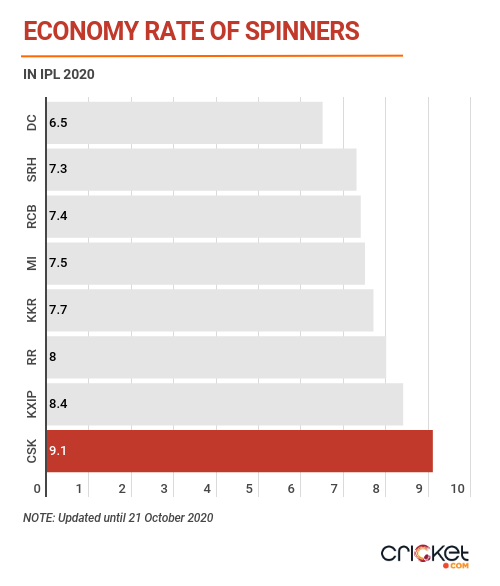 All this time, the leading wicket-taker in all T20s since the start of 2019 who has 104 wickets in 70 games and the purple cap winner of IPL 2019 is cooling his heels in the dressing room. Or occasionally carrying the drinks.

What exactly is Kedar Jadhav’s role?

Jadhav would have harboured hopes of gaining some sort of confidence with his unorthodox offspin but he hasn’t bowled a single over thus far.

Every player has an off-season or two, but Jadhav’s intent or lack of it is what has posed serious question marks. 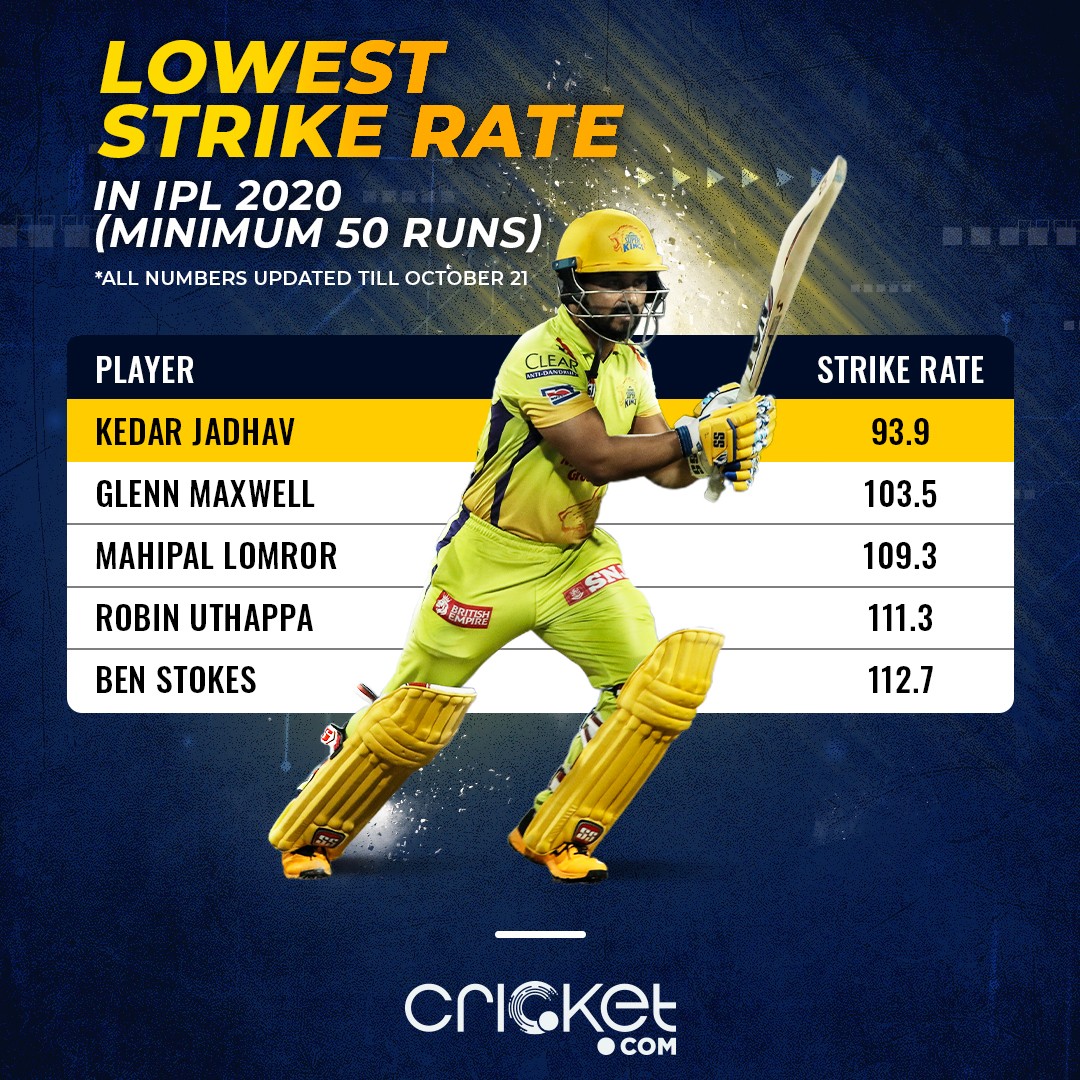 “The youngsters, we didn't see the spark to push the guys”

"You don't want to chop and change. Insecurity is something you don't want to prevail in the dressing room. Also the youngsters, we didn't see the spark to push the guys.”

Dhoni’s statement about lack of spark in youngsters after Chennai’s loss to Rajasthan in Match 37 was particularly hard to digest.

What youngsters could the Chennai captain possibly be talking about? The youngest Indian player in CSK’s squad is Gaikwad, at 22. The only younger man in the squad is English allrounder Sam Curran, 21, who has played in each of CSK’s 10 games this season. Next are N Sai Kishore and N Jagadeesan at 23, followed by Monu Kumar, 25, and KM Asif, 26.

Gaikwad played 2 matches for CSK where he scored 0 and 5 after which he was unceremoniously dropped. Jagadeesan played a solitary game, where he scored 33 off 28 balls, still better than some of the other “seniors” in the side, Sai Kishore is yet to feature in a game, so is Asif. Monu Kumar has been cooling his heels for the last three years in the CSK dugout.

Which once again begs the question, which youngsters is Dhoni talking about. Surely at 35, Jadhav is no longer a youngster, is he?

Chennai have for the longest time faced this issue of not breeding Indian youngsters. Look at any other franchise: Bangalore have Devdutt Padikkal, Kolkata have Shubman Gill, Delhi have Prithvi Shaw, Punjab have Ravi Bishnoi, Hyderabad have Priyam Garg, Rajasthan have Kartik Tyagi, Mumbai have Ishan Kishan.

Every franchise has at some point given their youngsters a long rope, Chennai have for the longest time banked on experience. They reached the final of 2019 IPL because of that but the bubble had to at some stage burst. It has in 2020.