The yellow brigade are all set to conquer Jaipur

The yellow brigade are all set to conquer Jaipur

After a drubbing at the hands of Kolkata Knight Riders in Match 21st at Jaipur and a record that now reads one win in five matches, Rajasthan’s chances of making the playoffs has decreased drastically. When the tournament kicked off, our prediction engine had given RR a 54 % chance of making the play offs; that has now decreased to 13 %. Against that, Chennai has actually gone up in the probability charts, and is sitting on top of the points table.

The following Criclytics engine provides a snapshot of how the chances have altered for the competing teams. 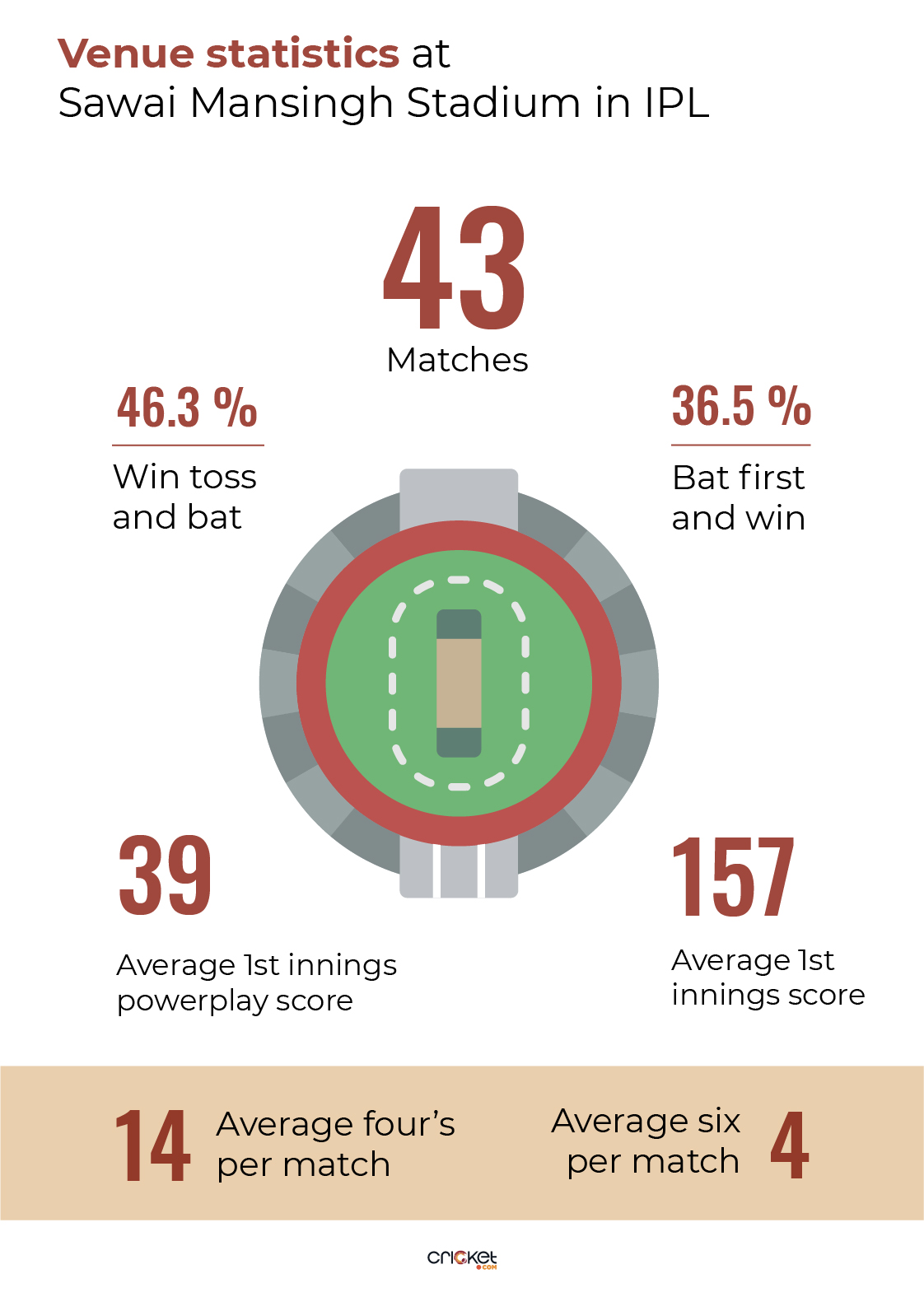 Across the three games played at this venue, the wicket in Jaipur has consistently played on the slower side, with the ball gripping on the deck providing some lateral movement for the medium pacers, and turn for the spinners.

CSK has put together a balanced attack characterized by its ability to throttle any opposition, at any stage of the game. Deepak Chahar has had a particularly impressive season; his captain MS Dhoni trusts him with the opening over despite Chahar not being the paciest, and the bowler has repaid the captain’s faith abundantly, both by picking up wickets upfront and maintaining a tight economy rate. 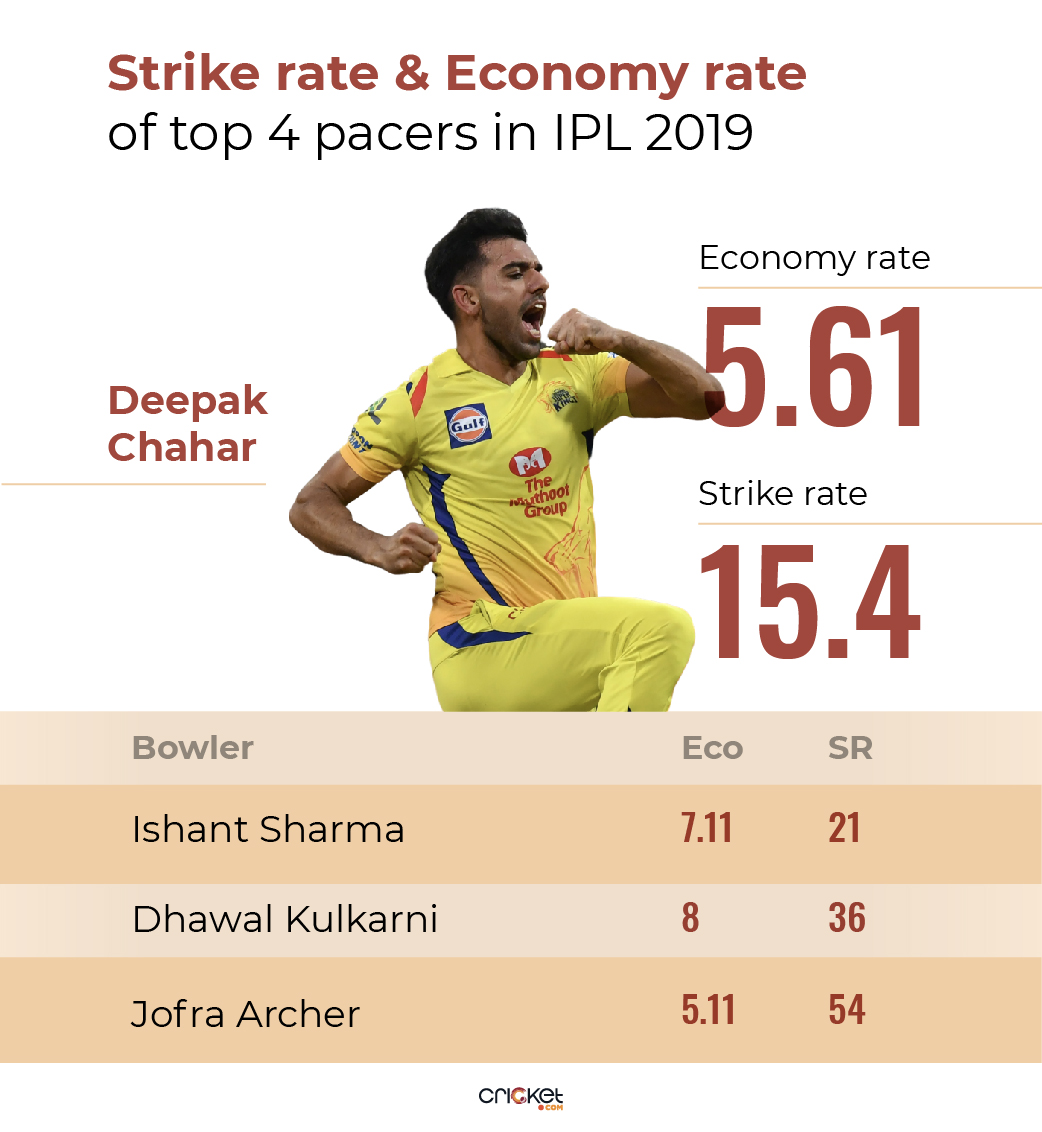 One of the mantras when playing at Jaipur is “pace off the ball”. A good example comes from the previous game when RR hosted KKR. Harry Gurney bowled at an average speed of 116.58 kmph , and by slowing it down, found that he was getting good purchase and movement off the deck. The other plus with slowing the ball down further on an already slow track is that the batsman has no pace to work with; he finds that he has to hit harder just to get the ball off the square, and that is when the timing goes away. 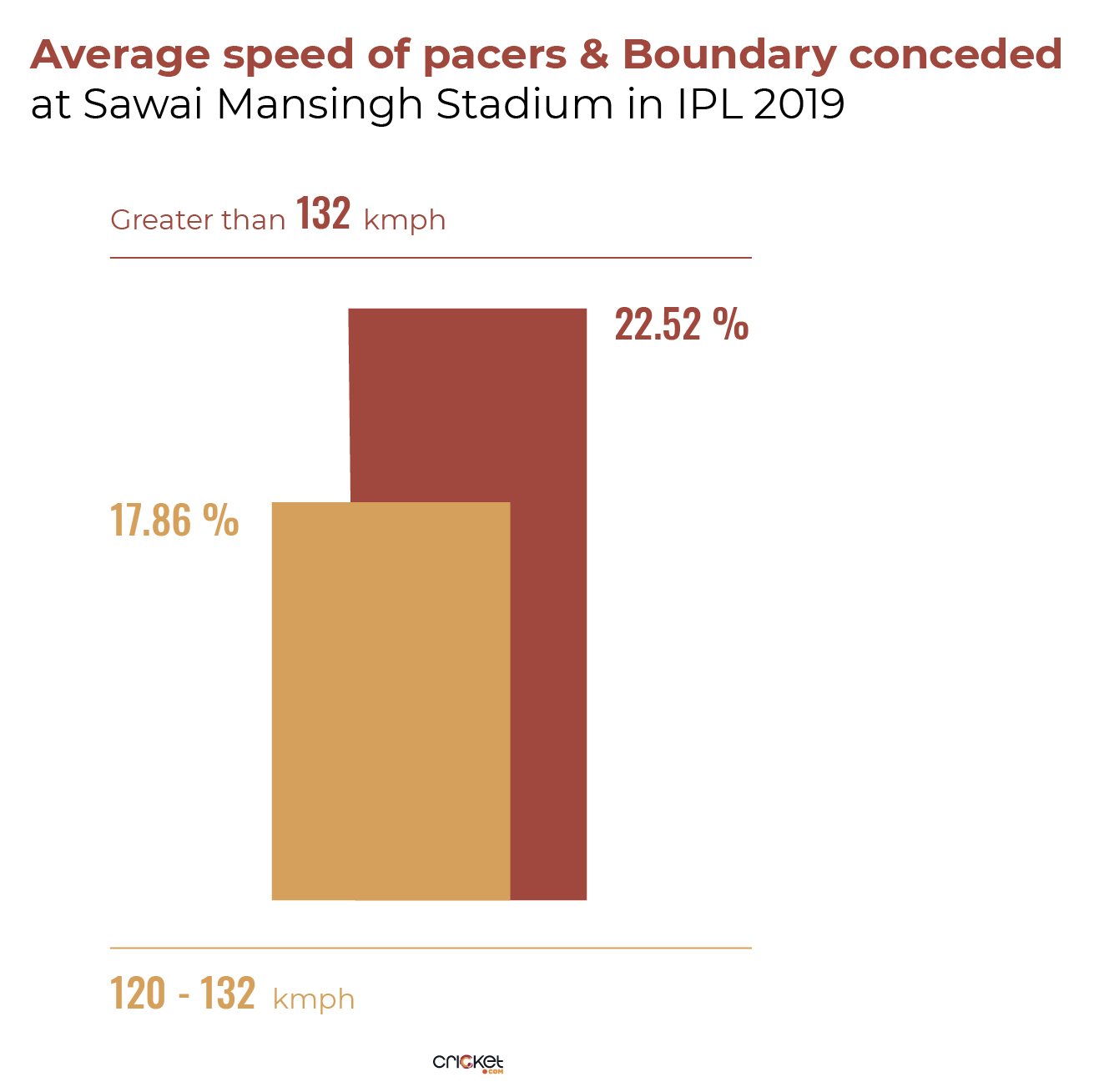 For CSK, the form of spin twins Harbjajan Singh and Imran Tahir has been a revelation, with the former bowling in the powerplay while Dhoni brings Tahir on towards the middle of the innings. Jaipur should suit both the offie and the leggie – thus far, spinners who have slowed the ball down, bowling at an average speed of 84-87 kmph, have been successful particularly in the middle phase. CSK’s spinners will know exactly how to go about things in Jaipur, because they are used to playing at the MA Chidambaram Stadium, which is easily one of the slowest venues this season. 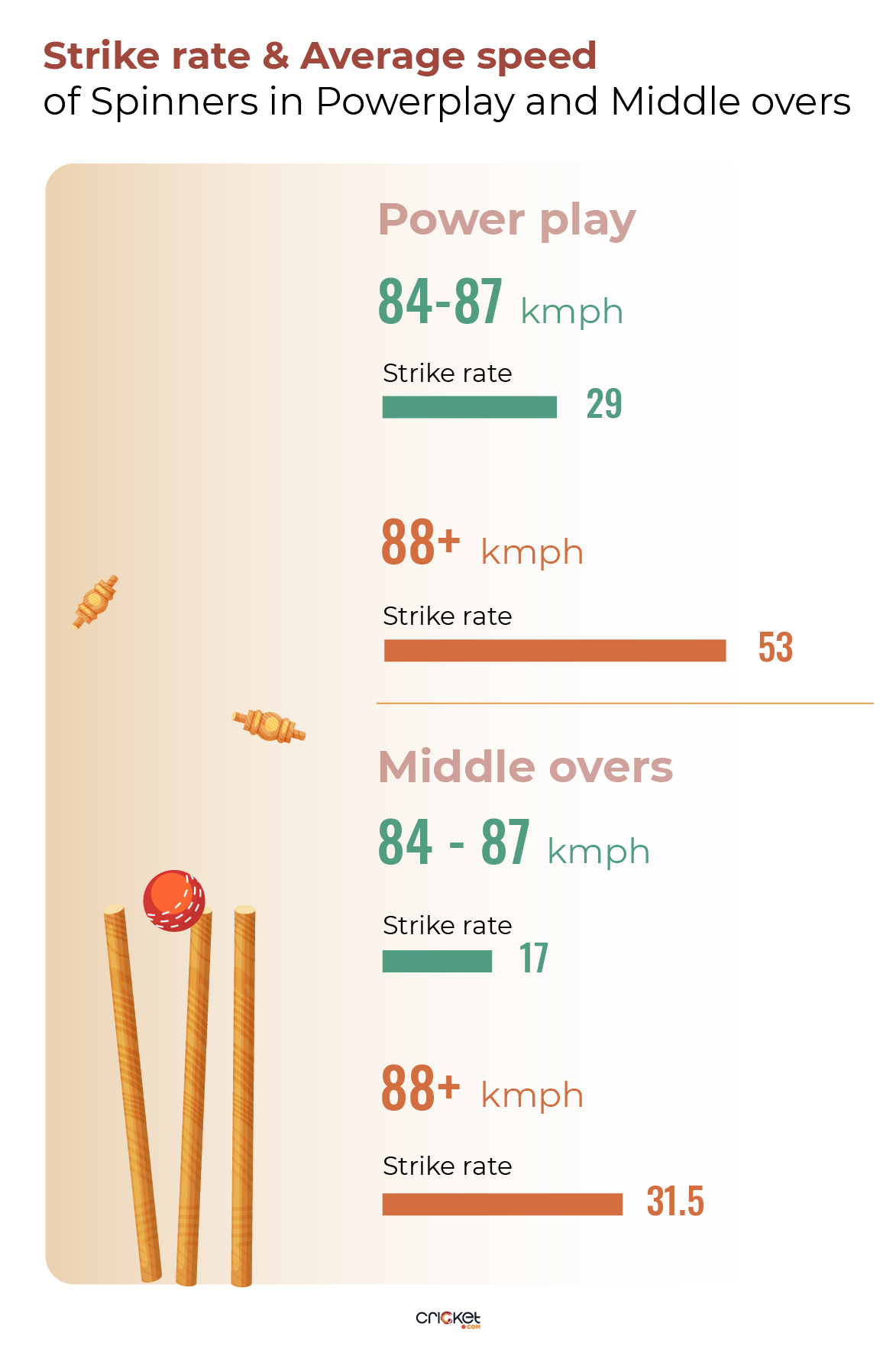 If CSK is well served by its spinners, RR is the exact opposite: Only Shreyas Gopal has performed to expectations thus far, while off spinner Krishnappa Gowtham has disappointed. One major factor that accounts for Gowtham’s lack of success is his speed – he averages around 96 kmph, which is not helping his cause on a home ground where, as an earlier chart showed, the slower you bowl the more purchase you get. 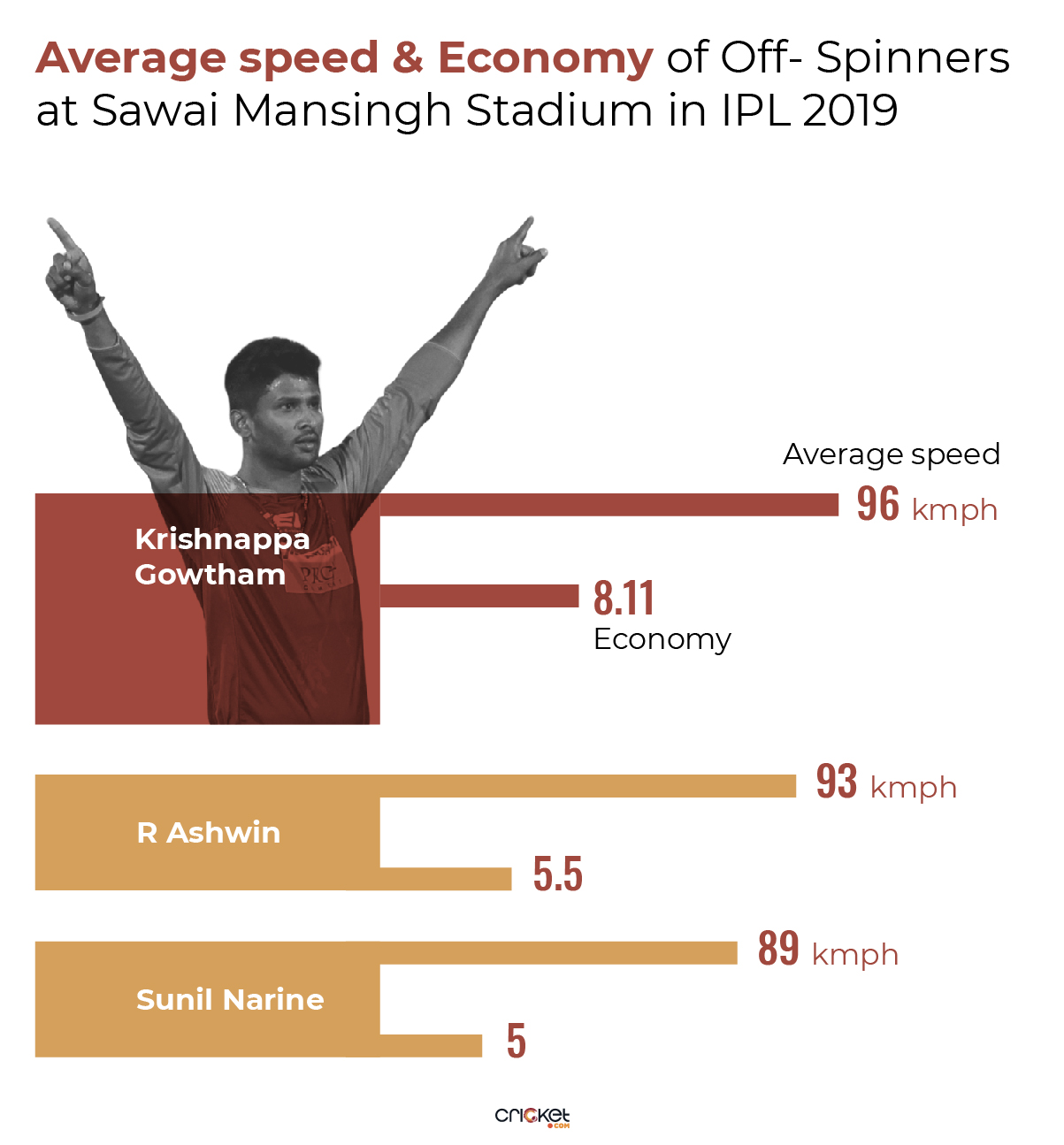 Rajasthan’s batting has been somewhat pedestrian thus far; the lineup has lacked both consistency and the ability to go big, with only the occasional 30s and 40s to show. Overseas star Jos Buttler hasn’t been able to replicate his form from the previous year – he invariably gets a start, but fails to convert it into a substantial innings. Sanju Samson’s injury has made things worse for the home team, since it deprives RR of explosive power in the middle. Steve Smith, who anchors the RR innings, scores at 113 in the middle overs, which is way below par for T20s even on a slow pitch. And to compound things, the other overseas star Ben Stokes has not lived up to his billing as a finisher. Thus, Rajasthan’s batting suffers at both ends, and in CSK they go up against an opposition capable of exploiting the smallest weakness.