Thunder look to feed off the hurting Stars 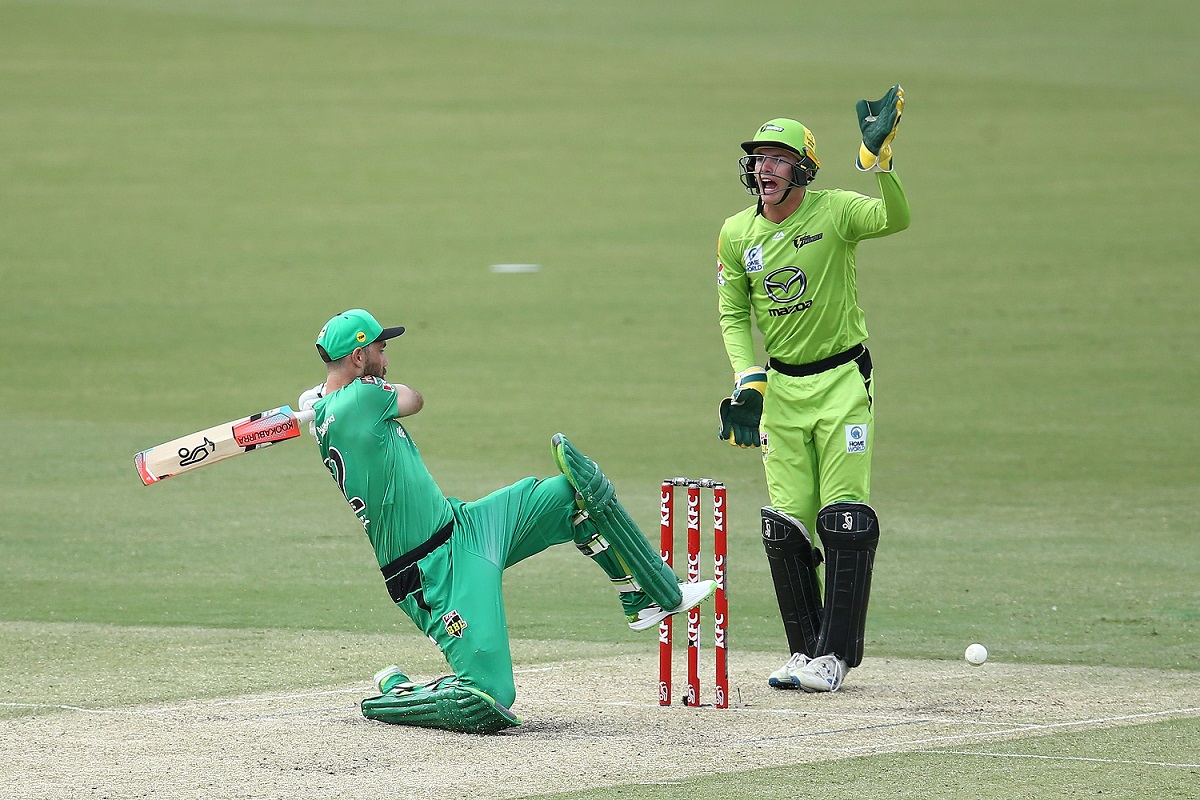 Thunder look to feed off the hurting Stars

After the Final in the last season, the Sydney Sixers broke the hearts of Melbourne Stars yet again. At the end of 39 overs of the game – played on Boxing Day - it seemed like the Stars will finally have their revenge. As it turned out, an ill-timed injury to Nathan Coulter-Nile and some imperious hitting by Daniel Hughes made it a night to remember for the Sixers and a night to forget for the Stars. There was an expression of utter shock on the face of Glenn Maxwell’s face, who failed to defend 20 runs in the last over.

Stars were without the services of their most dependable batsman, Marcus Stoinis – who is taking some time off from the bio bubble. In recent seasons, the Stars relied on him and Maxwell to carry the load with the bat. This was the reason that their run-rate at the death ahead of the last game was lowest in the season.

The problem of dealing with death overs found a solution in Nicholas Pooran. Until his arrival at the crease, the Stars were struggling at 64/4 at the end of 11th over. Pooran, one of the cleanest strikers of the ball in world cricket going around, scored 42 runs in the next eight balls he faced. Stars ended up scoring 129 runs in the last nine overs. The target for the Sixers was huge, the Stars were favourites.

With the ball, frequent wickets kept the game tilted in the Stars’ favour. But, there was one man chipping away the deficit. Two wickets in hand, 20 runs to get, Stars had Coulter-Nile to go to. Only he was off the field, out injured. Maxwell took it upon himself. He had done this before, for Australia with fewer runs to defend. The only difference was that this time, he had the opposition captain on the strike batting at 80. He had already taken the best spinner of the Stars – Adam Zampa – to the cleaners in his last over. With three hits in three balls, Hughes spoilt the script for the Stars. He could not finish the chase off and felt four short of a memorable ton. But, he had done enough to leave the Stars perplexed.

The loss will hurt. But, T20 leagues do not provide much time to sulk. Having dominated most of the last game, the need to take with them positives as they face the other Sydney side at the Manuka Oval. The only lingering question is around the fitness of Coulter-Nile and finding his replacement in case he cannot make it.

The resurgence of the Thunders

The Sydney Thunders played the Stars in their first game of the season at the same venue. That evening, they had no counter for Stoinis while Zampa foxed them with a spell of 2/10 in his quota of overs.

Since then, they have roared back into the tournament with three successive victories. After wins against the Heat and the Scorchers, they humiliated the Renegades in their last game. Playing at the same venue as their next game, they scored 209. Helping them along the way was their rising star Oliver Davis – who also represented Australia in the Under-19 World Cup in 2020. While there were collective contributions, Davis hit five consecutive sixes spread across two overs to infuse momentum in the innings. When it was their turn to bowl, they bundled the Renegades for 80 as they suffered their second loss of over 125 runs this season.

It is usual for teams in BBL to lose players due to international duty. This year the quarantine rules have been an added challenge. However, Thunder have been lucky on that aspect. Their two main international players – Alex Hales and Adam Milne – are not regular for their international sides while Sam Billings is done with his quarantine and will now be available for selection.

Milne’s addition has been fruitful for Thunder. In the two games he has played so far, his economy has been 5.42. Helped by the 19-year Tanveer Sangha who has seven wickets so far with an economy of 6.71, Thunder have been the second-most economical team in the early stages of BBL-10. 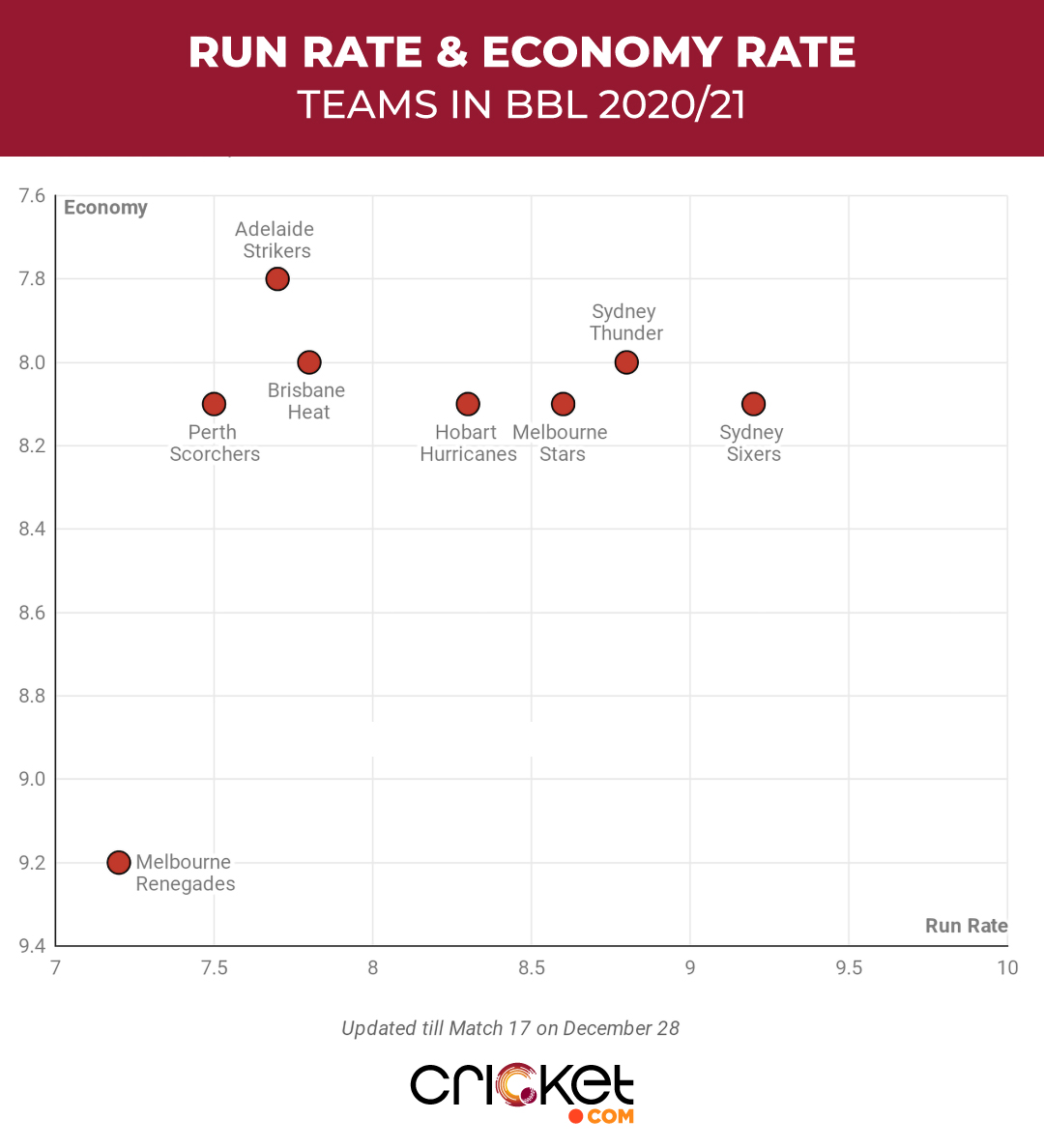 With the bat, their skipper Callum Ferguson has led the way with an average of 48.66. Helped by the contribution of others, Thunder have the second-highest run-rate after Stars so far.

But all is not rosy for the team with the lowest win percentage in BBL history. After a re-modelled action, Chris Green, with an economy of 8.9 has not been as effective as he used to be earlier. Also, Daniel Sams who had an economy of 7.8 in the last season and picked 15 wickets in the death overs - the most by any bowler – has looked out of touch so far. However, he has made up for an unimpressive economy of nine with 87 runs of 38 balls in the season so far.

Bouncing back after their loss against the Stars, Thunder look well settled to not allow Maxwell and his side get over the Boxing Day blues.