To get the wicket of Kohli at the end was huge: Robinson 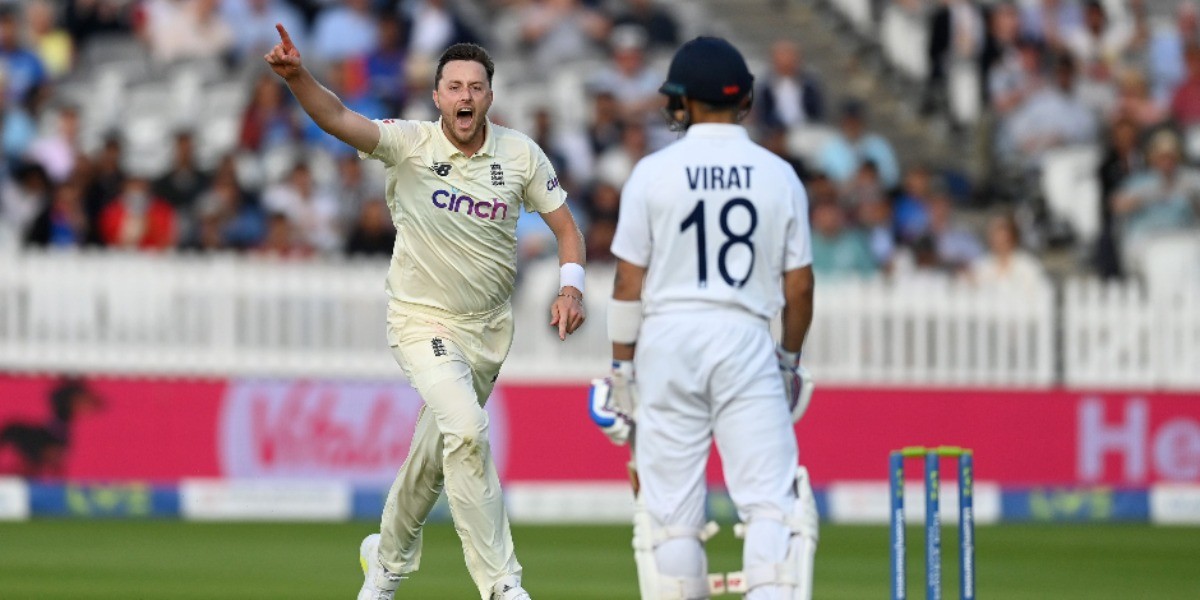 To get the wicket of Kohli at the end was huge: Robinson

Thanks to KL Rahul and Rohit Sharma, India dominated the first day of the second Test against England at Lord's. However, Ollie Robinson believes that his late dismissal of Indian captain Virat Kohli could give England an opening on day two. The visitors were 276/3 when the stumps were drawn on day one, with Rahul still batting on 127.

"We toiled hard today against their batters and, to be fair, they played well. So to get the wicket of Kohli at the end was huge and gives us a bit of momentum for the morning. The plan to him was always to bowl fourth or fifth stump, back of a length...luckily the plan worked," said Robinson, who took 1/47 in 23 overs on day one.

Robinson, who was England's most economical bowler on the first day, feels his skipper Joe Root made the right call to put India into bat after winning the toss. Indian openers Rahul and Rohit had to toil hard to survive the first hour as they could only manage 14 runs in the first 12 overs.

However, once Sam Curran was introduced into the attack, Rohit went after the left-arm paceman and turned the tide in India's favour. Rohit slammed 83 and put on 126 runs with Rahul. The latter then added 117 with Kohli (42) to put India in a commanding position.

"I expected that. County cricket, you get two or three good batters, here you get six or seven good batters. That's international cricket. I've shown over the last couple of games that I'm ready for the toil when it comes.

"There were probably 10 or 15 play-and-misses that I could count and, on another day, we might have had them two- or three-down early. We definitely looked at conditions and thought we could get a few early ones here. It's just one of those days where they didn't nick it to be honest.

"The swing was a little bit inconsistent, I don't know if it was the ball or the overheads. We decided to go wobble-seam for a little bit, which we felt was a good plan, but the wicket was a little bit slow for it and not as receptive as we thought it might be."

England have already lost Stuart Broad (calf tear) for the entire series but the hosts were delighted with the news of James Anderson (tight quad) being fit and available for the second Test. The third-highest wicket-taker in Test cricket, Anderson was still England's best bowler on day one. The 39-year-old dismissed Rohit and Cheteshwar Pujara in quick succession but Rahul and Kohli ensured India didn't collapse like they did in the first Test.

"From speaking to him personally, he said he was absolutely fine. I think it was more precaution. It's a long series. But he declared himself fit in the morning and you can see he's bowled 22 overs... same old Jimmy. He bowled very well, we've come to expect that of him now, and he just keeps on providing," said Robinson, who shared the new ball with Anderson.

"We spoke about getting one or two with the new ball and to have them four- or five-down overnight would have been a good day. If we can get a couple of early ones in the morning we're right in it."