Struggling to stay afloat, SRH has a batting problem to solve: After Warner and Bairstow, it is bye-bye

Chennai fetishes the outsize hero; its prolific movie industry is built around the archetype of the ordinary man who battles impossible odds and emerges triumphant in the last reel. And in CSK the city, and the state, has found the cricketing equivalent of the Rajnikanths, the Ajiths and Vijays who have elevated this trope to mythic levels. (It is no coincidence that CSK’s iconic captain MS Dhoni is, to the legion of fans, ‘Thala’- the sobriquet conferred on the most popular of Tamil Nadu’s biggest heroes.)

In the 2019 tournament opener, admittedly on a pitch from hell, CSK dragged a chase of 71 into the 18th over before sealing the deal. In its second game, against Delhi Capitals, CSK got to 98/3 in the 11th over chasing 150, then made heavy weather of the second half and won with just two balls to spare. In its sixth game, against Rajasthan Royals, CSK dawdled along, found itself needing 18 in the last over, and only a combination of a woozy MS Dhoni’s fortuitous dismissal off the third ball of the 20th, and a Mitchell Santner six off the very last ball of the match, won the game.

When Chennai bats first, it defends to perfection irrespective of the nature of the wicket; when it chases, cardiac units across the city are alerted to be on standby.

The Tale of the Table

Chennai, with 14 points from seven wins out of eight games, is in the playoffs - its only aim, from here on, is stay top of the table so it gets to play the weakest of the other qualifiers. Against that, Sunrisers Hyderabad - which started the tournament looking a cert to qualify - is poised on a precipice. The side, with three wins and four losses has six points, with tough games to follow including two against CSK; and one each against KKR, KXIP and MI all of whom are ahead of SRH on the table, does not look good for the Sunrisers’ chances of qualifying.

It doesn’t help that the pitch at the Uppal Stadium has done a u-turn in course of the tournament. In the first game of this season, SRH chased down 198 with an over to spare; in the second, SRH posted 231 for the loss of just 2 wickets. It looked like Uppal would be a batting paradise - and then it went downhill. SRH collapsed to 96 all out in response to MI’s mediocre 136/7; the par kept getting lower, and in the last match played here, SRH collapsed to 116 in response to DC’s 155/7, in a game that saw Keemo Paul bowling at around 97k.

Slow, low wickets are tricky in themselves; for SRH, which comes into this game on the back of three successive losses, the task becomes doubly difficult because in CSK, they are up against a side that has perfected the art of playing on such tracks.

And the clincher: SRH last won a match against CSK way back on May 2, 2015. The teams met four times in 2018, when SRH with an in-form attack was at its peak - and CSK chased successfully every single time.

A key reason for this success rate lies in the matchup of CSK’s most influential batsman, MS Dhoni, against SRH’s best death bowler, Bhuvneshwar Kumar. 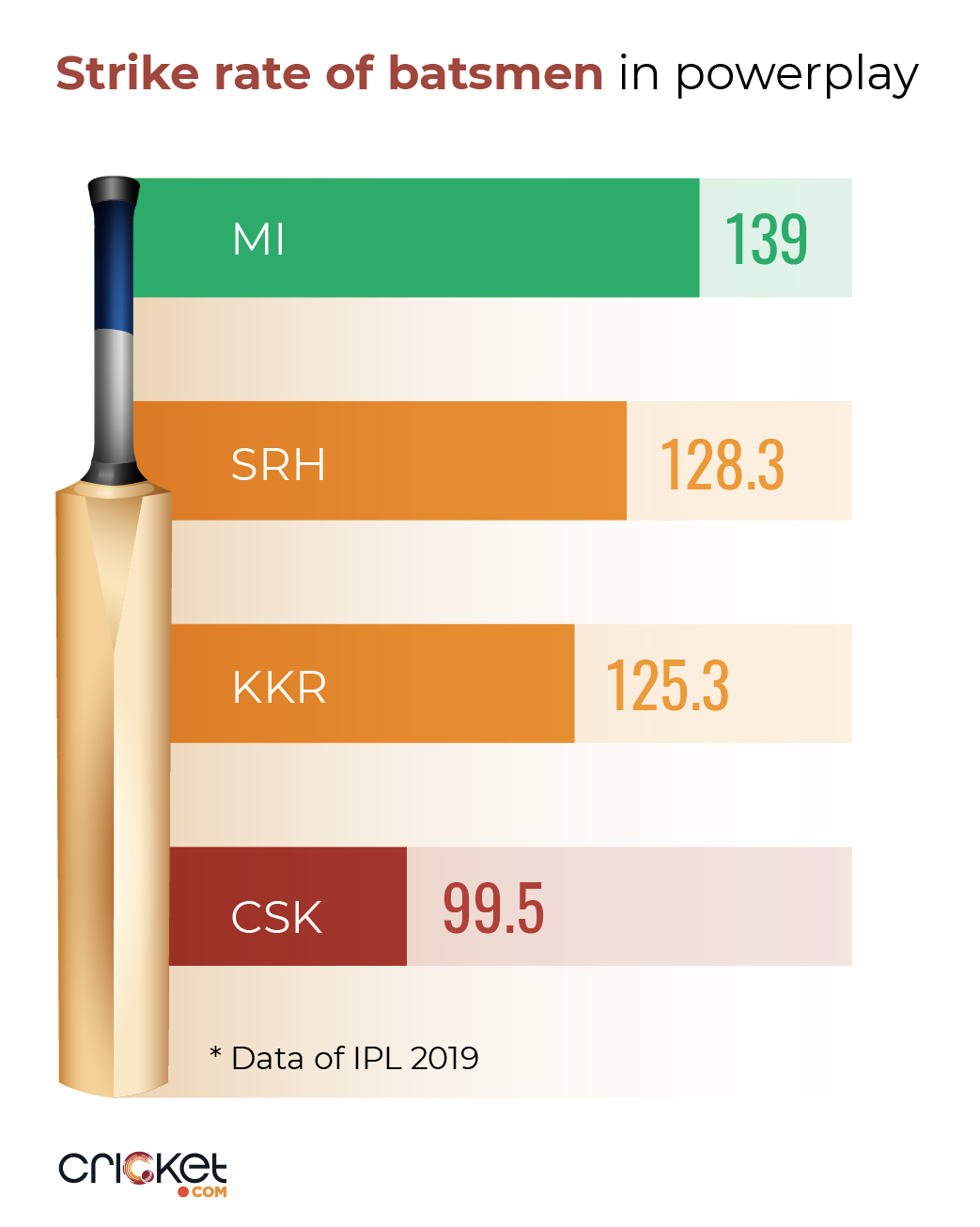 CSK is not just a slow starter - it ambles along till almost the very end. In the powerplays, it has the worst run rate of all teams (5.97); in the middle overs, again, it is the worst, scoring at just 6.45.

It depends for a late-overs finishing kick on Dhoni, who in six innings thus far has scored 230 runs off 181 balls faced, at a strike rate of 127.07. It is not the hottest strike rate going - currently, MS ranks 31st in the list of batsmen with the best strike rate this season - but he is the best CSK has (Raina, CSK’s second best, ranks 38), and he gets the job done.

Solving the Dhoni problem becomes crucial, and this is where SRH could take a calculated punt by holding Rashid Khan in reserve. Dhoni scores at just 63.5 per cent against the Afghan leggie.

Khan, interestingly, is in the form of his life: In seven matches thus far, he has bowled 168 balls, given away just 162 runs for his six wickets, and has an economy rate of 5.78, fourth on the table behind Harbhajan Singh, Mohammad Nabi and Imran Tahir.

That solution, however, creates its own problem. SRH depends on Rashid Khan to hold down the middle overs; if they keep Khan for the end, and Mohammad Nabi - who has a better economy rate, and has taken more wickets than his countryman - can’t play because SRH wants to fit in Kane Williamson, then it will lack a quality spin option to attack in the powerplay, and to play enforcer in the middle.

The best solution would be for Williamson to discover an injury that keeps him out; failing that, an interesting put would be to rest Sandeep Sharma and bring in the left arm spin of Shahbaz Nadeem.  A good part of the reason why is Shane Watson. Even with his big-hitting prowess, CSK are painfully slow in the powerplays; attack Watson with left arm spin, to which he is susceptible, right at the top and SRH can put the skids under CSK from the get-go.

To revert to the Williamson question, it seems a harsh call for the captain to drop himself - but if the goal is to qualify, you make the call that is in the best interests of the team. Williamson coming in leaves the team a bowler short. In its last game, against Capitals, SRH needed a combination of Deepak Hooda, Abhishek Sharma and Vijay Shankar to bowl four overs, and those overs cost 35 runs.

If logic suggests that Nabi -- 7 wickets in four games, with the second-best economy rate of 5.49 - should make the side, why is the call not being made? The chart below provides a clue: 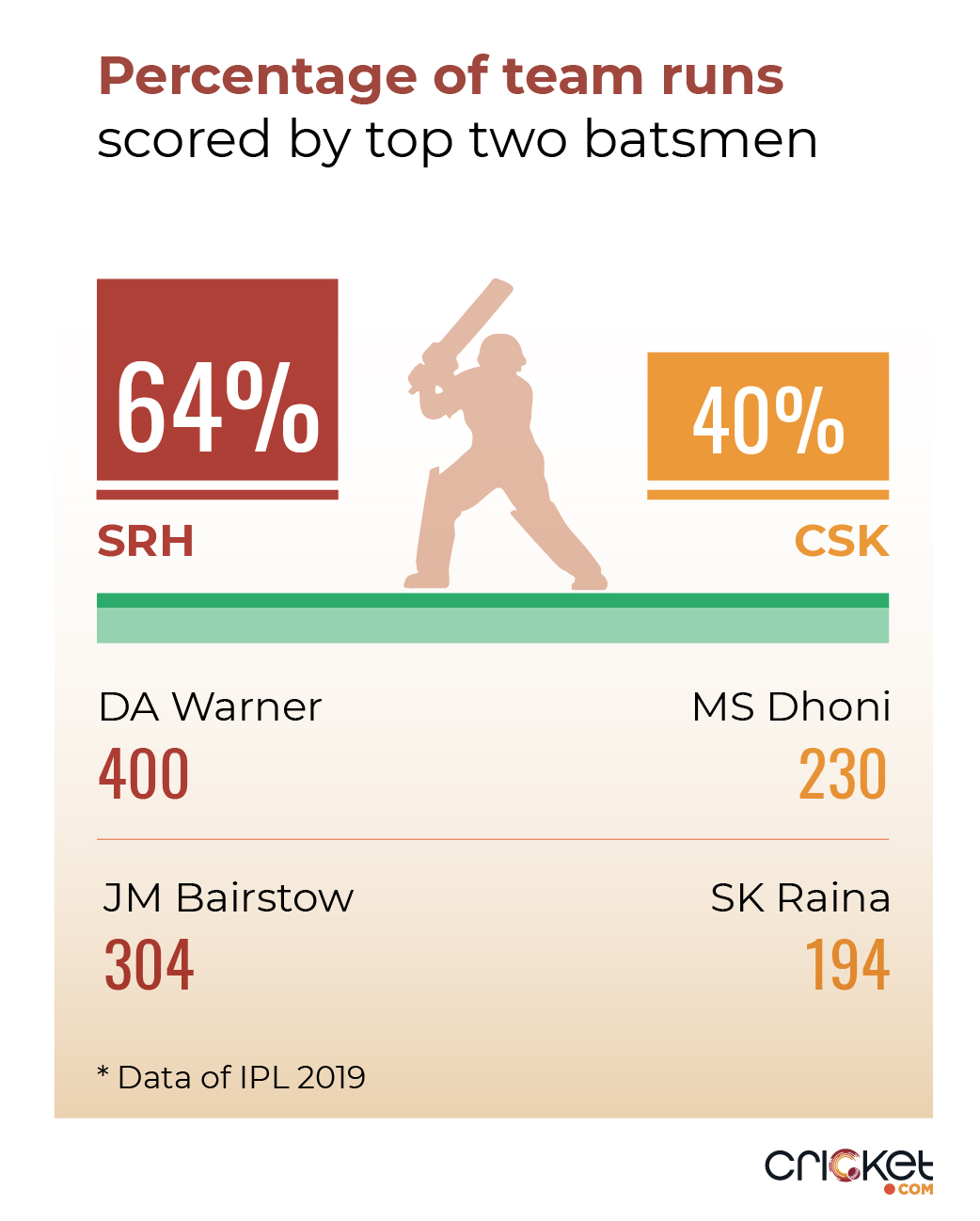 SRH is top heavy; the openers contribute 60% of the team’s total runs. Warner tops the batting charts and Bairstow comes in at six; the only comparable pairing is KL Rahul and Chris Gayle (who rank 2 and 3 in the batting charts at this point). The SRH problem is, there are two gun openers, and then there is nothing.

SRH’s last game, against Delhi Capitals, is a classic example: Chasing 156, SRH was 66/0 at the end of 9 overs, needing 90 runs off the next 66 balls with all ten wickets in hand. Bairstow fell in the 10th over with the score on 72 - and SRH lost 9 wickets for 44 runs in the space of the next 54 balls, including a spell of play where they lost eight wickets for 15 runs (Williamson made three runs in eight balls).

CSK is not similarly handicapped. Though Dhoni and Raina contribute 40% of the team’s runs, one or the other of Shane Watson, Faf du Plessis, Ambati Rayudu, Kedar Jadhav and Ravi Jadeja can be counted on to chip in.

The question SRH needs to answer - urgently, because time is running out on the franchise - is which department gives it the better chance of winning against CSK: Batting, notionally boosted by Williamson’s return but still prone to crumble, or bowling, with Nabi playing enforcer at the top, Shahbaz Nadeem in the middle, and Rashid as the Dhoni-specific weapon?

CSK’s selection problems are simpler: Dhoni prefers to keep things stable, and the only change he might contemplate is bringing back Harbhajan Singh to take on Warner in the powerplays.