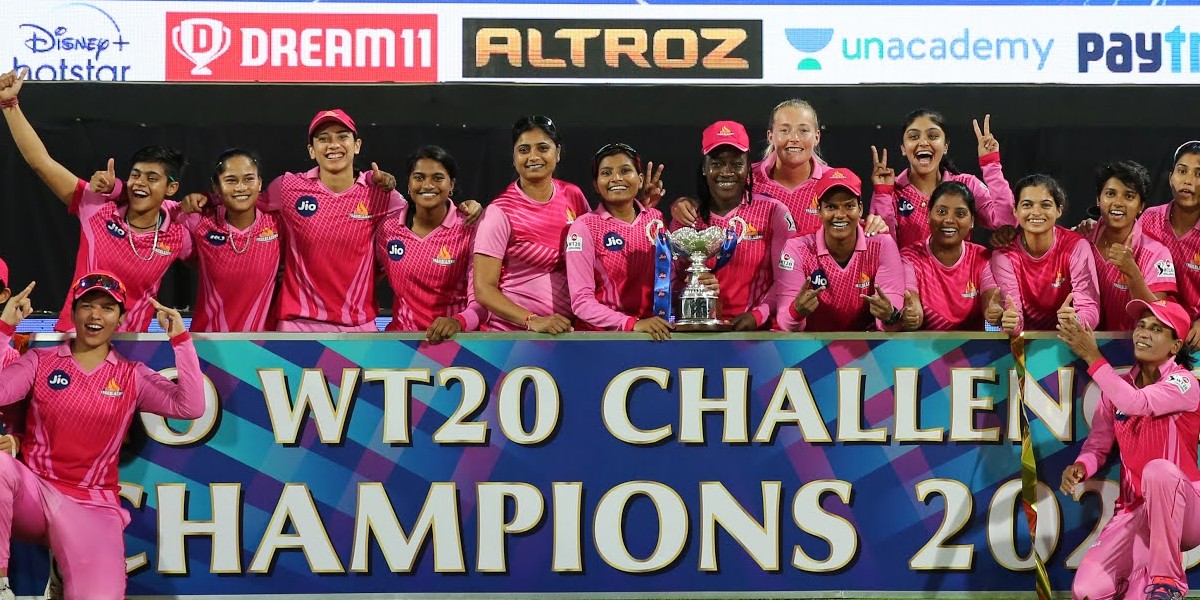 Trailblazers finally dethroned the mighty Supernovas to win their maiden Women's T20 Challenge 2020 title in Sharjah on Monday (November 9). Smriti Mandhana led from the front and played a stunning knock on a surface on which every batter struggled. There was a massive collapse as Trailblazers lost seven wickets for 17 runs, but the bowlers stepped up and defended a below-par total, leading their team to an outstanding 16-run victory.

Asked to bat, Mandhana smashed a 49-ball 68 and got Trailblazers off to a super start. The left-hander however didn't find any support from the other end as they kept losing wickets and could only manage 17 runs in the last five overs. Trailblazers collapsed from 101/1 to 118/8 in their 20 overs, courtesy Radha Yadav's 5/16. In reply, the defending champions never looked in the game and could only manage 102/7 in their 20 overs.

Having struggled in the last two encounters, Mandhana looked in sublime touch from the word go. The stylish left-hander, who scored 33 off 40 in the last league game, came out all guns blazing and went after Anuja Patil in the second over. The offspinner was either too full or too short and extracted no turn whatsoever with the ball. Mandhana crafted Patil for consecutive fours before finishing the over with a maximum down the ground.

Deandra Dottin unsurprisingly wasn't at her brutal best but the right-hander from West Indies ensured Mandhana had most of the strike in the first six overs. The Trailblazers skipper didn't allow any bowler to settle in and was outstanding through the off-side. Mandhana used Ayabonga Khaka and Shakera Selman's pace to perfection and slammed them for a boundary each. She hit 33 of the 45 Trailblazers scored in the powerplay.

The runs kept flowing from Mandhana's bat, while Dottin simply couldn't get going. The onus was on Poonam Yadav to slow things down and the legspinner didn't disappoint. Poonam only bowled one over in the last encounter but the 29-year-old looked much more comfortable tonight and troubled both Mandhana and Dottin with her slow and loopy legbreaks. The scoring rate dropped from 8 to 6.4 in the space of four overs and the pressure started to build on both the batters.

The likes of Poonam, Patil and Shashikala Siriwardene bowled way outside off to Dottin and the right-hander failed to get those big shots. It was Poonam who finally put an end to Dottin's (32-ball 20) misery as the opener miscued a heave straight into the hands of the fielder at long-on. Having scored just 15 in four overs, Mandhana finally managed to cut loose and tonked Poonam for 14 runs in the 12th over. In the process, Mandhana also brought up her fifty. Siriwardene was the one who kept Mandhana in check and also had her stumped in the 15th over. Mandhana smacked five fours and three sixes in her 49-ball 68, but was dismissed at a crucial juncture of the game. 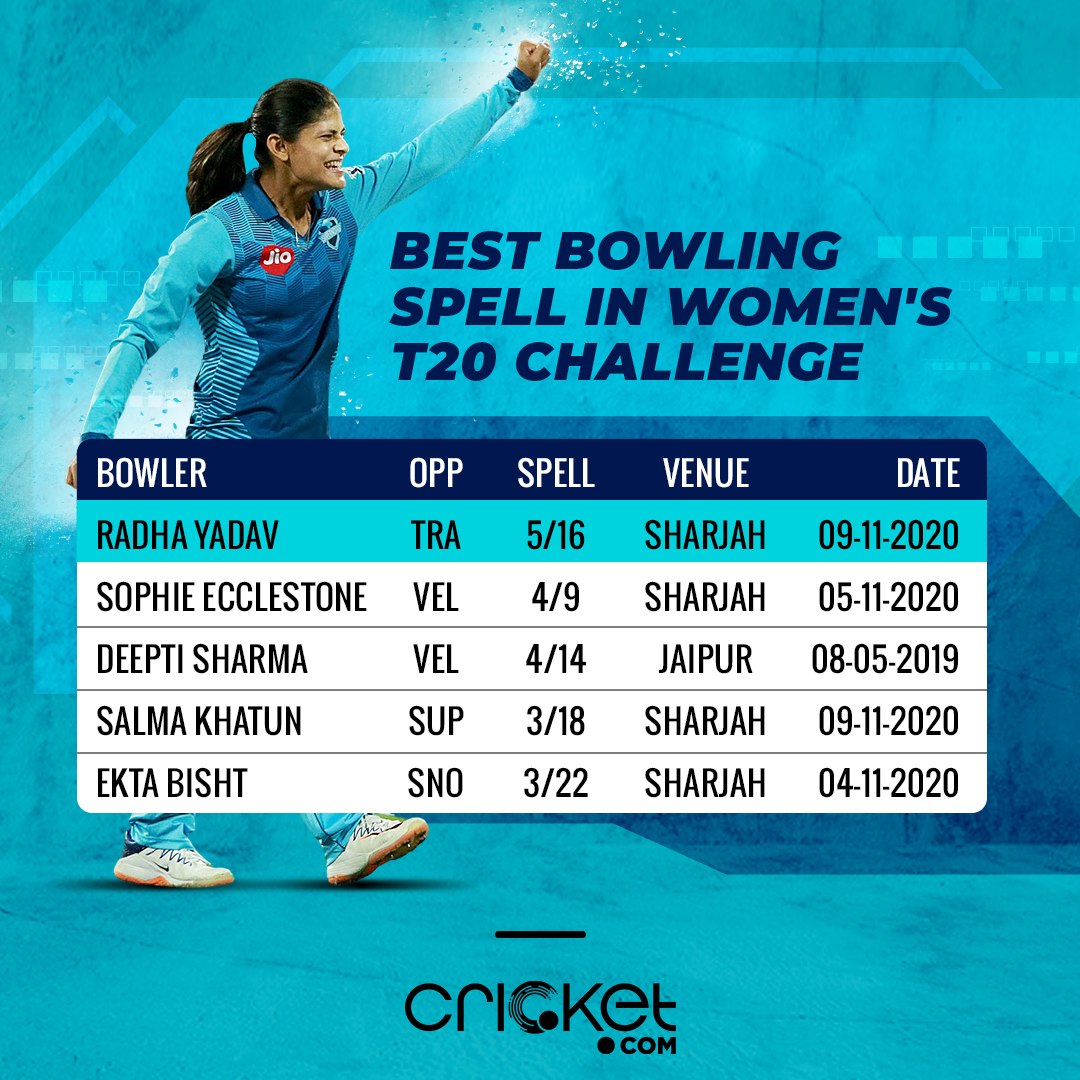 That's when the collapse happened. The departure of Mandhana affected Trailblazers' scoring rate as Richa Ghosh and Deepti Sharma failed to hit those boundaries. The spinners offered no pace to the batters and Radha got rid of both Ghosh (16-ball 10) and Deepti (10-ball 9) in the 18th over to turn the momentum in Supernovas' favour. The left-arm spinner, who defended nine runs off the final over in the last game, picked three more wickets in the last over and became the first bowler to take a five-wicket haul in the history of the Women's T20 Challenge.

Trailblazers needed early wickets, especially of Chamari Athapaththu. The leading run-getter of the tournament could have easily killed the game in few overs but the top-ranked T20I bowler Sophie Ecclestone sent her back to the hut only in the second over. After being swept for four, the left-arm spinner pinned Athapaththu (6) right in front of the stumps with a quicker one. With Priya Punia not playing, Jemimah Rodrigues was sent out to open the innings, while Taniya Bhatia too was promoted to No. 3. Trailblazers were not going down without a fight and they didn't allow Rodrigues and Bhatia to score freely. 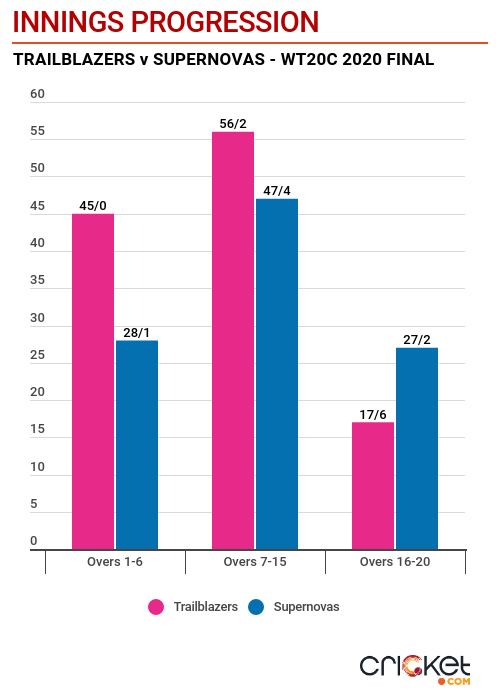 The wicketkeeper-batter struggled with the strike rotation and scored 14 off 20 before falling to Deepti just after the powerplay. The surface wasn't easy to bat on but the Supernovas batters were overcautious with their approach and that pushed the asking rate over 7. While the bowlers were doing their job, Thailand's Nattakan Chantam was outstanding on the field. The 24-year-old pulled off a stunning catch at cover-point and sent Rodrigues back for 13.

The pressure was mounting on Supernovas and the onus was once again on Harmanpreet Kaur to pull them out of the bog. The skipper along with Siriwardene started building a partnership but was struggling with her fitness. Rajeshwari Gayakwad, Deepti and Salma Khatun were all brilliant in the middle phase of the innings and brought the equation down to 44 off 30. Siriwardene and Harmanpreet added 37 runs for the fourth wicket before the former fell to Khatun after scoring 19 off 18.

Harmanpreet was limping but didn't find much support from Patil (8). The required rate kept getting higher and higher and despite trying their best, Harmanpreet and Patil failed to get those boundaries. With 28 needed off 12, Khatun bowled a tremendous penultimate over, and also knocked over Harmanpreet for a 36-ball 30. The offspinner from Bangladesh finished with figures of 3/18, while the other bowlers also did a fantastic job.