Here are a few tips that might help you in creating your fantasy team for the opening CPL fixture between TKR and GAW at Brian Lara Stadium, in Trinidad

After a long, arduous wait, we finally have some T20 action to look forward to as the CPL 2020 kickstarts from August 18, in Trinidad. The opening game promises to be a mouthwatering one with three-time CPL champions Trinbago Knight Riders all set to take on the 4-time finalists Guyana Amazon Warriors on Tuesday. 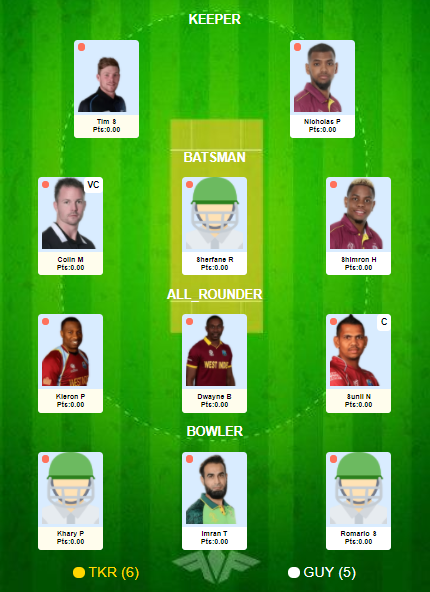 While you could go for the above team, you also have the option of choosing your own team from cricket.com’s Fantasy Research Centre. Based on algorithms we come up with six different teams that could fetch you crucial points. 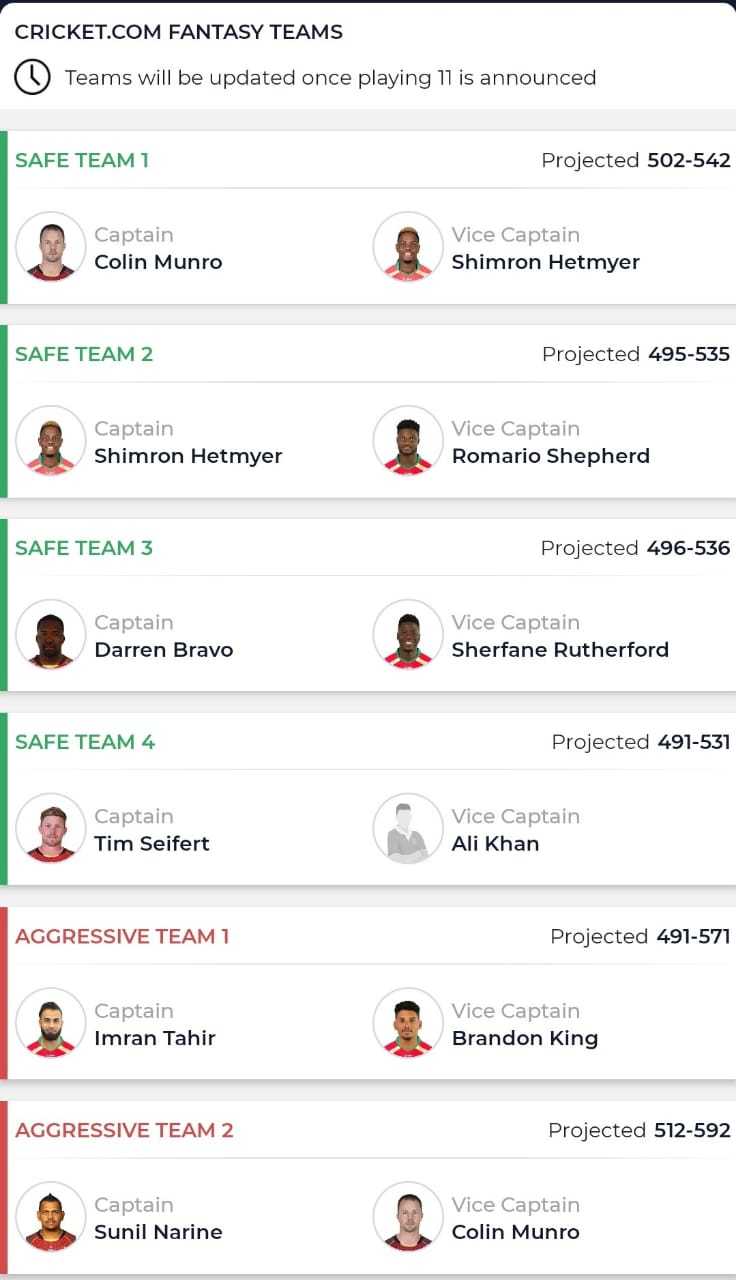 A bowling heavy setup should be the way to go for matches played at this venue.

While pacers have been slightly better at this venue in terms of bowling strike rate and wickets taken since 2017, spinners haven’t been too shabby either. 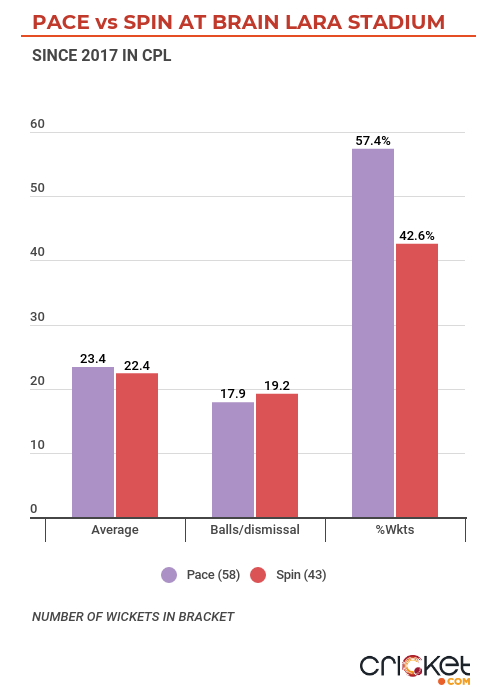 Both Trinbago and Guyana have a plethora of pacers and spinners to choose from. Trinbago, in particular, are a well-packed team. As for Guyana, their youngsters are their strength.

Among the pacers, you could go for the likes of Romario Shepherd, Ali Khan or Naveen-ul-Haq. The highest wicket-taker of CPL, Dwayne Bravo, is also not a bowler to be left out.

As far as the spinners are concerned, you are truly spoilt for choice. Sunil Narine and Imran Tahir are the obvious choices. However, Narine’s batting is an advantage, particularly if he opens the innings. There are other spinning options such as Fawad Ahmad and Khary Pierre.

Among the batsmen, Colin Munro, Sherfane Rutherford and Nicholas Pooran should make it to your side.

Pooran has enjoyed his time against Narine in the shortest format of the game. In the 8 innings he has faced the offie, he has scored runs at a strike rate of 162.5 in T20s. 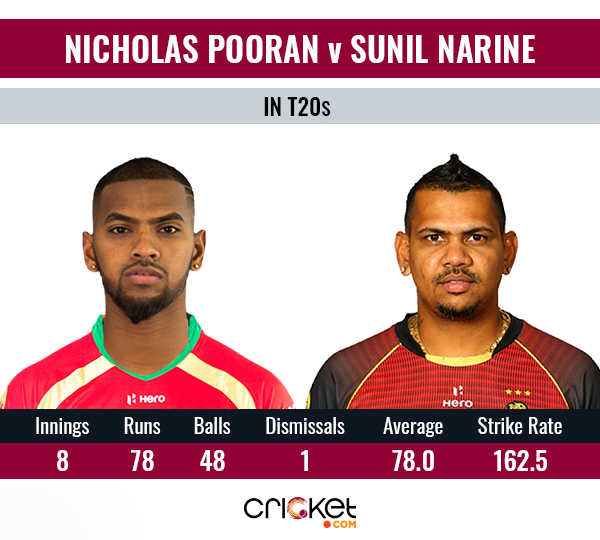 Probably Pooran’s only weakness amongst the Trinbago bowlers would be Bravo. The medium-pacer has dismissed Pooran three times in 23 balls at an average of 10.0 and a strike rate of 130.4 in T20s 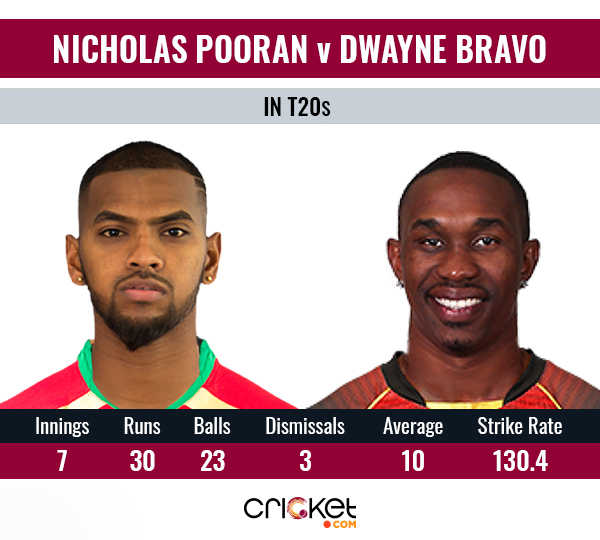 Lendl Simmons has an excellent record against Imran Tahir. The batsman has an average of 60 and a strike rate of 142.9 in T20s against the leg-spinner. 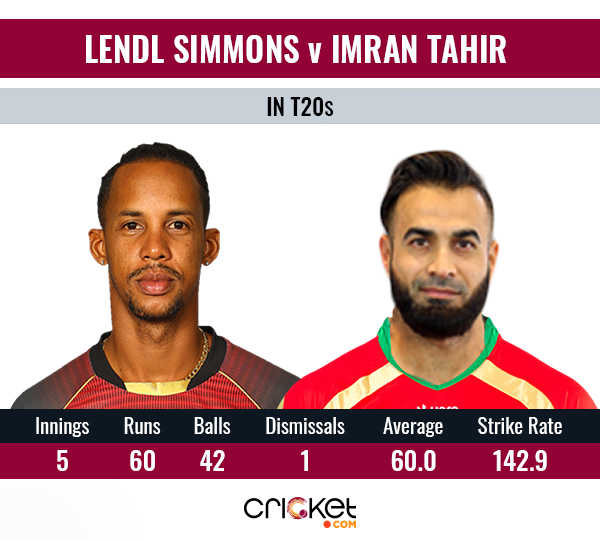 SUNIL NARINE: The off-spinner undoubtedly would be our suggested captain. With the likes of left-handed batsmen abundance of Guyana, the off-spinner will be troublesome. His records against Guyana is impeccable in the CPL. In the 8 innings he has bowled against them, he has bagged 11 wickets at an economy of 4.6 and balls/dismissal ratio of 17.5. His economy is the best against a team when a bowler has bowled more than 5 innings in CPL. Adding to that his bowling record at the venue in CPL is also fantastic as he has taken 6 wickets at an economy of 5.4.

COLIN MUNRO: The left-handed batsman enjoys himself when batting against the Guyana Amazon Warriors in the CPL. Munro has scored 465 runs in 11 innings at an average 66.4 and a strike rate of 136 against Guyana in CPL. Those 465 runs are the 2nd most scored against Guyana in CPL. On top of that, he has scored over 200 runs with an average of 51.0 and a strike rate of 122 in the 6 innings he has played at the venue. Certainly, those records suggest that he is one of the red hot buys in the fantasy team 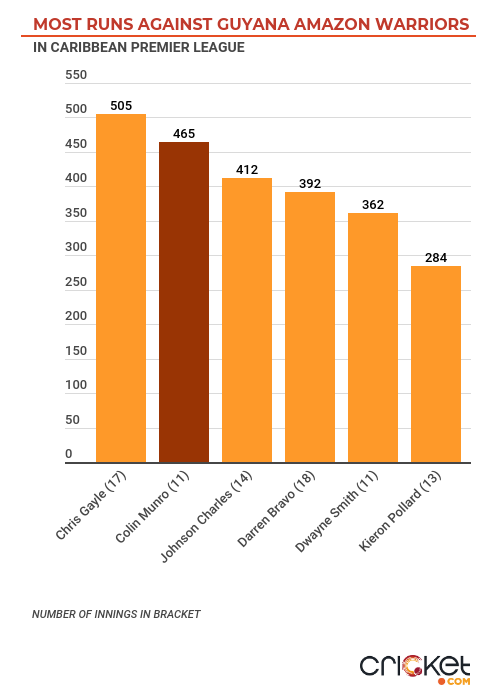 SHERFANE RUTHERFORD: The middle-order dasher has a liking towards the Knight Riders in CPL. He, in just 4 innings against them has struck 88 runs at a strike rate of 225.6. Even though he comes low down the order to bat, his ability to score a quickfire 30 certainly is a potential point seeker. Also, his records against TKR’s death bowlers makes him one of the X-Factor batsman.

KHARY PIERRE: Even with all the left-handers in the Guyana batting line up, Khary Pierre has a good record against them. In general, against the Guyanese he has a good record in CPL. In the 8 innings against them, he has bagged 10 wickets at an average of 18.7 and balls/dismissal ratio of 17.4. The venue providing great support since 2017 in CPL for the left-arm orthodox, there lies a natural advantage.