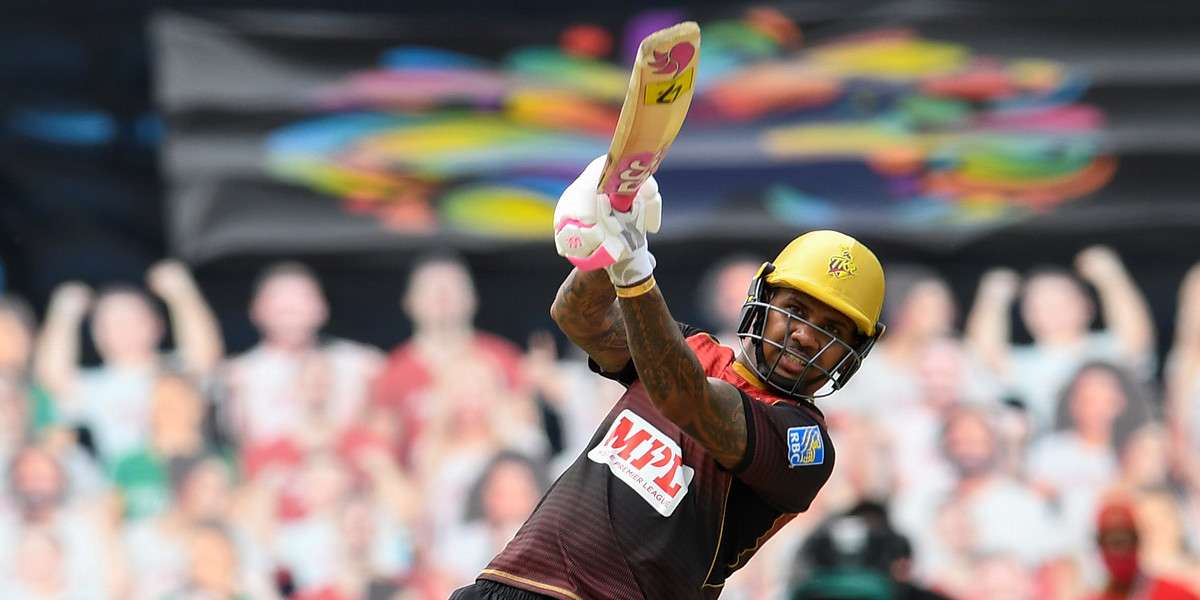 Trinbago Knight Riders and St Kitts and Nevis Patriots have endured contrasting fortunes in CPL 2020 so far, to say the least. On one hand, the team from Trinidad and Tobago are flying high and find themselves on the top of the table after securing seven wins from as many matches this season. On the other hand, the Patriots have won just one game out of seven and are bottom of the standings.

The Knight Riders have been quite dominant in matches against the Patriots as well, winning 10 out of 14 past encounters. In the last five contests between these two sides, the Knight Riders have won four while Patriots’ sole win during this sequence of matches came via a Super Over last season. 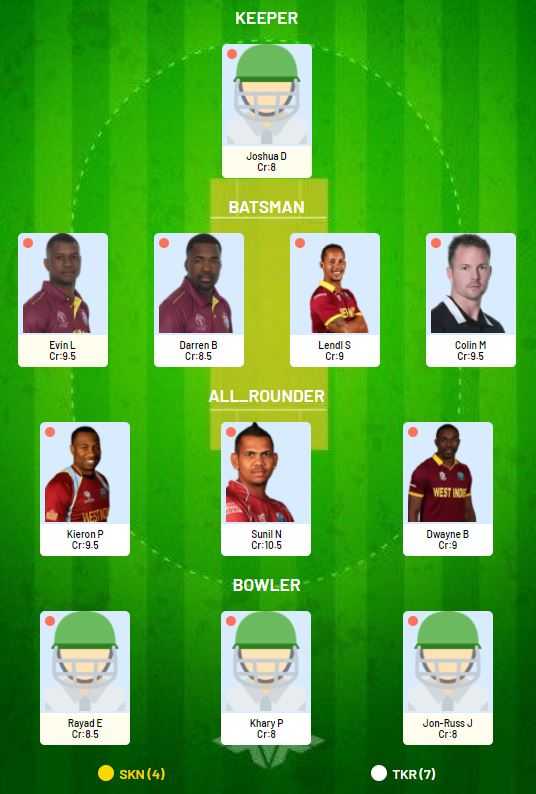 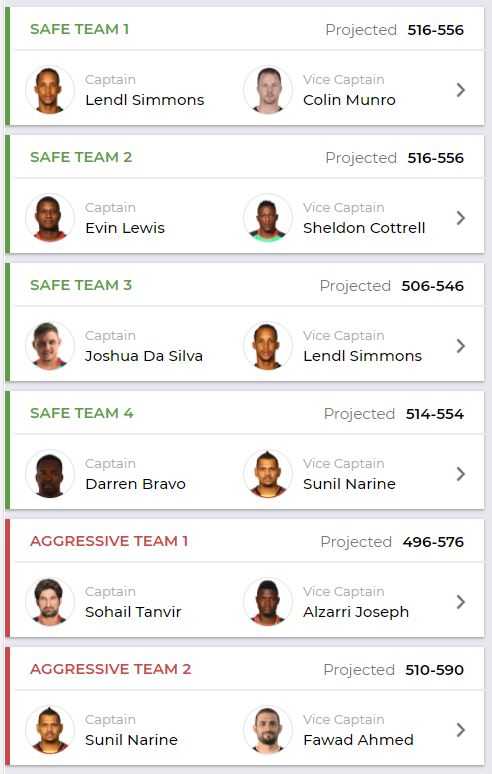 It’s no secret that conditions have favoured bowling a lot during CPL 2020 so far.

But when compared to Queen’s Park Oval in Port of Spain, the Brian Lara Stadium in Tarouba has slightly better stats for batsmen this season. The average is better off for batsmen by 3.4 runs per wicket and there is a difference of 0.7 when it comes to balls per dismissal.

In 12 matches at the Brian Lara Stadium in CPL 2020 so far, there have been six wins each for sides batting first and second. The teams, though, have favoured bowling first with captains winning the toss opting to chase in nine of those matches. 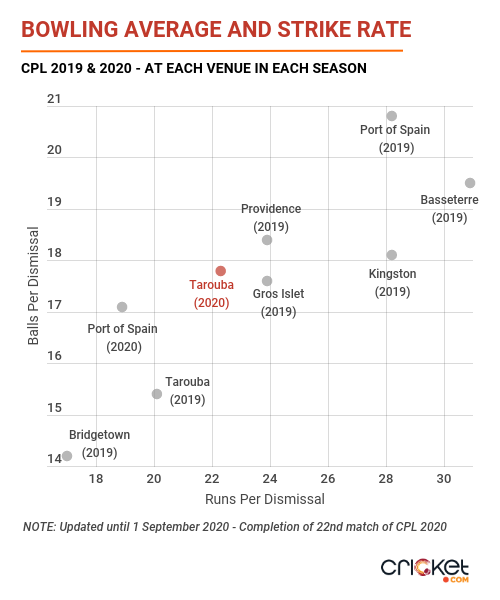 In CPL 2020 so far, at the Brian Lara Stadium, pacers have picked up more wickets but you could say that spinners have performed better.

Pacers accounting for more wickets could be attributed to the fact that they have bowled more too. In Tarouba this season, fast bowlers have bowled 52.6% of the overs and taken 52.7% of the wickets.

While slower bowlers have enjoyed a better average (20.9 vs 27) than pacers, there isn't much to differentiate when it comes to strike rate. Spinners have also conceded 1.9 runs per over lesser at this venue during CPL 2020.

Going by these stats, you might want to pick a good mix of pacers and spinners in your team. 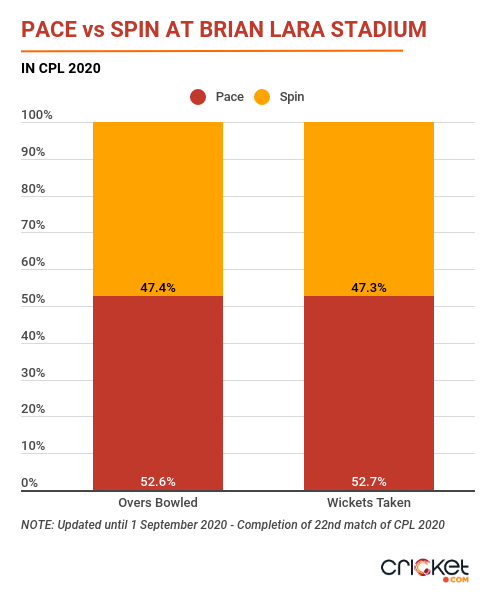 Lendl Simmons has really struggled against Sohail Tanvir in the past. While he might have been dismissed just once by the Patriots left-arm pacer, the Knight Riders opener has managed to score just 72 runs from 101 deliveries. That’s a very poor scoring rate in T20 cricket, especially considering that 85 of those deliveries have come in the first six overs of the innings. 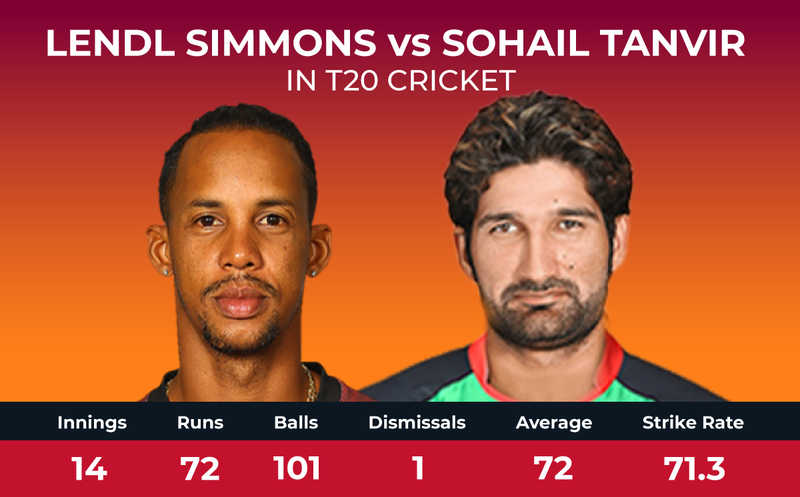 In the Knight Riders’ final two matches in Port of Spain, Colin Munro was dismissed for a duck on both occasions. But he returned to form with a Player-of-the-Match performance in Tarouba on Tuesday, and in this game, his match-up against Patriots skipper Rayad Emrit could be an interesting one. Emrit has been in good form with the ball this season, but he doesn’t possess the best of records against Munro in T20 cricket. 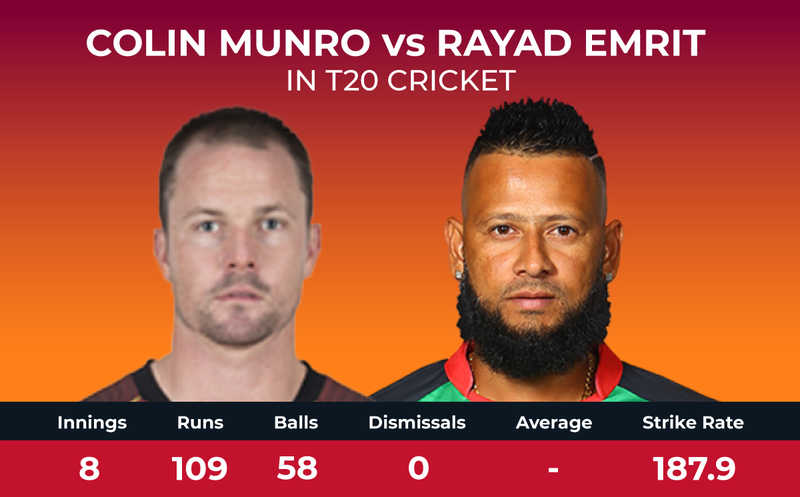 Denesh Ramdin and Dwayne Bravo, who have won two World T20s together with the West Indies, haven’t faced each other in a batsman-vs-bowler contest for just over five years now. This is mainly because both were part of the same CPL franchise – the Trinbago Knight Riders – between 2016 and ’19. Now, with Ramdin having moved to the Patriots, it will be interesting to see which way this match-up goes if it does take place. 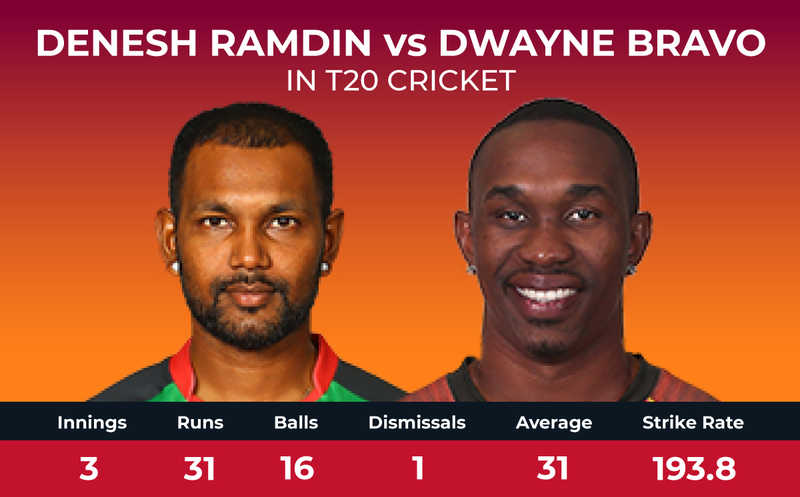 With Sunil Narine having returned to the side on Tuesday, you’d want to pick him as captain, given the form he has displayed so far this season. In CPL 2020, he has scored two fifties with the bat and taken five wickets with the ball in four matches, with at least one wicket in each game so far.

The Patriots have had a subpar tournament so far, but their captain Rayad Emrit is having one of his best CPL seasons as a bowler so far. In CPL 2020, he has taken 10 wickets in seven innings at an average of 14.7 and a strike rate of 15 which is very impressive. His economy rate of 5.9 in 2020 is his best in a CPL season yet. 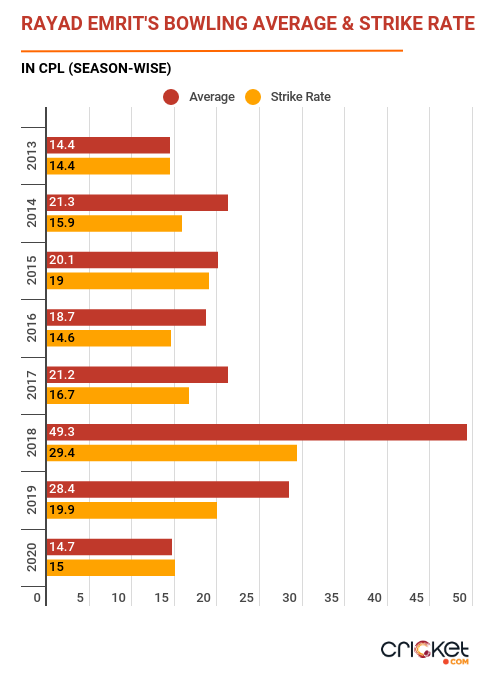 After outstanding performances against Barbados Tridents and Jamaica Tallawahs, Kieron Pollard is likely to be among one of the top picks for this match. His batting position could be an issue because if the Knight Riders’ top-order performs well, then Pollard might not get many deliveries to face. But that could be made up with his bowling as in his last three matches, he has bowled a total of 11 overs.

Jon-Russ Jaggesar could prove to be a good differential pick. In six matches in CPL 2020 so far, he has taken six wickets. In each one of those half-dozen matches, he has completed his quota of four overs which is a good sign from a fantasy cricket perspective.