Ngidi's comeback will be a huge morale booster for the Proteas

The World Cup, turned into a marathon event because all teams have to play each other, is now entering that phase where the strong runners – Australia, New Zealand, England and India -- have established leading positions; the hopeful runners are jostling for positions in the middle, and the weak ones are gradually lagging out of the race.

On Wednesday, June 19, table-toppers New Zealand lock horns with South Africa, who have finally got off the mark with a convincing win over Afghanistan and is hoping to make a late run from the outside.

As the tournament moves towards the north of England, new venues replace the ones we have seen thus far. Edgbaston, in Birmingham, will host its first match of this World Cup. Since the 2015 World Cup, 7 matches have been played here; teams batting first have won twice, while teams chasing have won on four occasions.

The Proteas will be the first real test for the Kiwis, since the schedule gave them an easy start with games against sub-continental sides (Sri Lanka, Bangladesh and Afghanistan). Afghanistan gave them a bit of a scare, but the lower order saw them home. India would have been a different ball game, but the fixture got rained out with the Black Caps and Men in Blue splitting points.

The New Zealand bowling looks a class apart in this World Cup, even granting they haven’t faced a stern examination yet. The Kiwis are the only team who have bowled out the oppositions in all their matches. The pace duo of Trent Boult and Matt Henry has the second best strike rate (45) after the West Indies (25) in the first ten overs. Since 2017, Trent Boult has taken the most wickets inside the first power play among all international bowlers.

In the middle overs, they have the services of the pacy Lockie Ferguson, who is more of a hit the deck bowler with the pace to match. In 2019 thus far, he is the highest wicket taker (13) in the middle overs (11-40), and he picks 27% of his wickets by bowling short or yorker-length.

Their main worry will be the form of opener, Colin Munro, who has thus far succumbed to the new ball repeatedly. In his ODI career, Munro has played 30 innings as an opener out of which he has been dismissed 22 times inside the first ten overs. Though he is a fast starter with a strike rate of 106 in the first 20 balls of his innings, that is negated by the fact that 55.2% of his dismissals are in the 1-20 balls range.

Kane Williamson and Ross Taylor, who follow Munro in the order, have since the 2015 World Cup contributed 56% of their team’s total runs. Taylor is the key in the middle order. In 2019, he averages 72 with bat, the highest for any batsman among all teams. Taylor’s main area of improvement has been his game against spin. Since the 2015 World Cup he averages of 88 against spin with a decent strike rate of 77.

The lower middle order hasn’t been tested enough, thanks to the form of Williamson and Taylor – but against the Proteas they will be, since they go up against the lethal abilities of Imran Tahir. Tahir has troubled the best of the New Zealand batsmen including Taylor and Williamson. His record against the Kiwi batsmen speaks for itself: 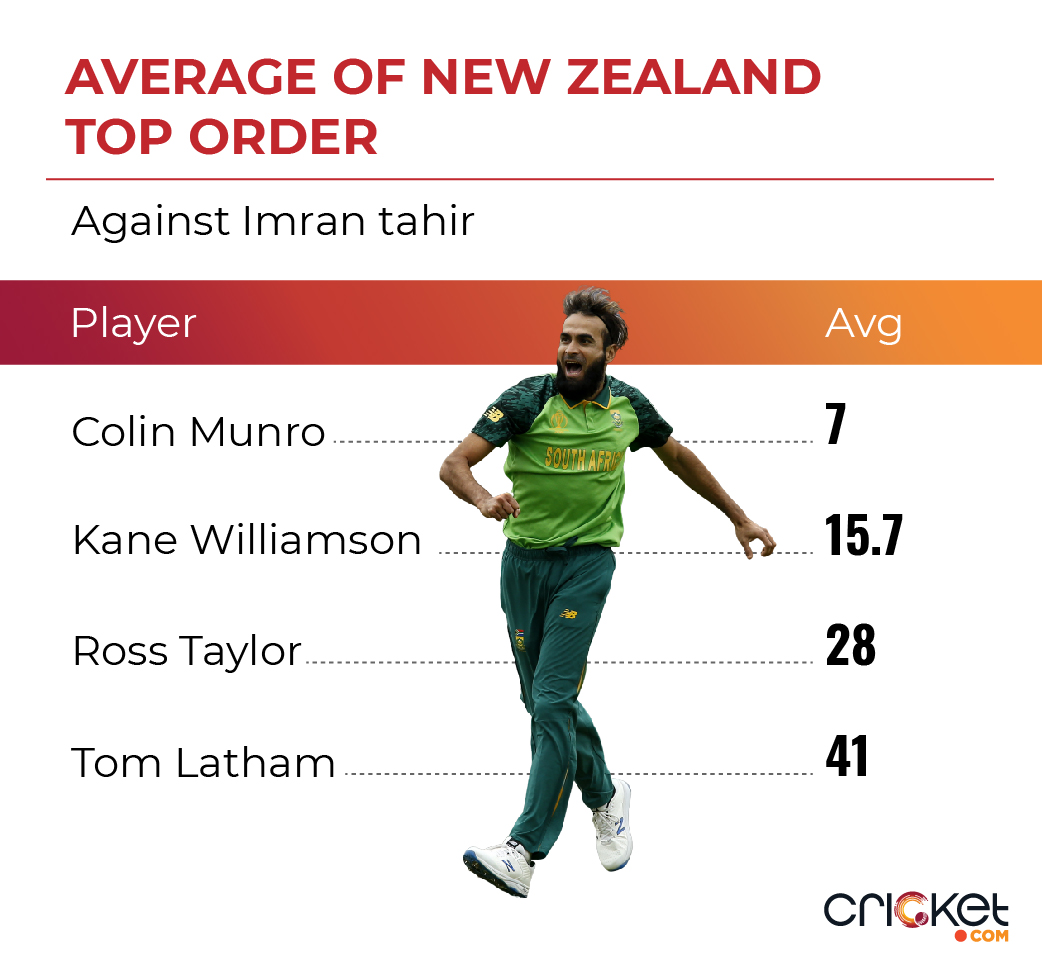 South Africa entered every World Cup as one of the favourites, but that is not the case this time, for a multitude of reasons:

# 1 They couldn’t pick the best possible squad. Superstar AB de Villers opted out leaving a huge vacuum in the middle order. Hence Faf du Plessis, who generally plays at number 3, has been forced to drop down to 4 to fill the void. They picked Jean-Paul Duminy, who had played just 2 matches leading to the World Cup – and that lack of big match practice shows in his woeful form.

#2: Injuries didn’t help their cause. They lost Anrich Nortje even before the World Cup began. Dale Steyn was coming into the tournament carrying an injury sustained during the IPL. His shoulder never recovered, and though he came to England with the squad, he has since had to fly back home, to be replaced by Beuran Hendricks. Lungi Ngidi caught a hamstring strain in the game against Bangladesh and is still in process of recovery.

#3: South Africa have been slow off the blocks with the bat, be it in the first phase or the second, which has hurt them in securing match-winning totals. Despite the fact that they score at 6.89 runs per over in the final phase, their run-rate of 4.26 and 4.92 in overs 1-10 and 11-40 respectively has given them very little momentum going into the death.

#4. The openers have not been able to see off the new ball. Hashim Amla, a mainstay of Proteas batting for so many years, has been inconsistent. He takes too long to get going, and gets out after playing too many dot balls, which puts enormous pressure on the following batsmen.

Their No 3 Aiden Markram hasn’t shown examples of the class he is known to possess. All this combines to put Faf at the crease much earlier than he would expect – and that is a handicap because he has to bat in circumspect fashion given the inexperience of those to follow.

#5: Although the Proteas have a pace attack to die for, they have been marred by injuries and underperformance -- especially Kagiso Rabada. In four matches he has managed to pick just 5 wickets. He took a wicket in every 45 balls, which is worse than Andile Phehlukwayo who picks a wicket once in every 34 balls. If the frontline bowler is not able to give breakthroughs, the Proteas have a huge problem ahead.
These are chinks the Kiwis will look to exploit, and they have the weapons to do it, as history shows.

Quinton de Kock doesn’t have a record to boast of against Trent Boult. In 7 matches, Boult has dismissed him on four occasions. In 2019, De Kock has scored 655 runs with an average of over 60. What is more important; he scored those runs at a strike rate of 102.66. He basically covers up the slow start of Amla.

The middle order adds insult to injury. In this World Cup they have scored at 4.67 runs per over, just above Sri Lanka and Afghanistan, with a paltry batting average of 26.

South Africa’s nemesis against leg spin is not a mystery. Their weakness have already been exploited by India. The duo of Kuldeep and Chahal cleaned the top 5 giving away just 97 in their 20 overs quota. So if New Zealand brings in Ish Sodhi, it won’t be a surprise.

There is much at stake in this game. The Kiwis want to win, in the process proving that their table-topping status is not merely because of the scheduling of easy games. And South Africa, with just one win against three losses in their five games thus far, has to win – not just this game, but every one of the games that follow – if they are to have a hope of getting to the knockouts.

Given South Africa’s struggle against leg spinners, New Zealand can be tempted to bring Ish Sodhi.