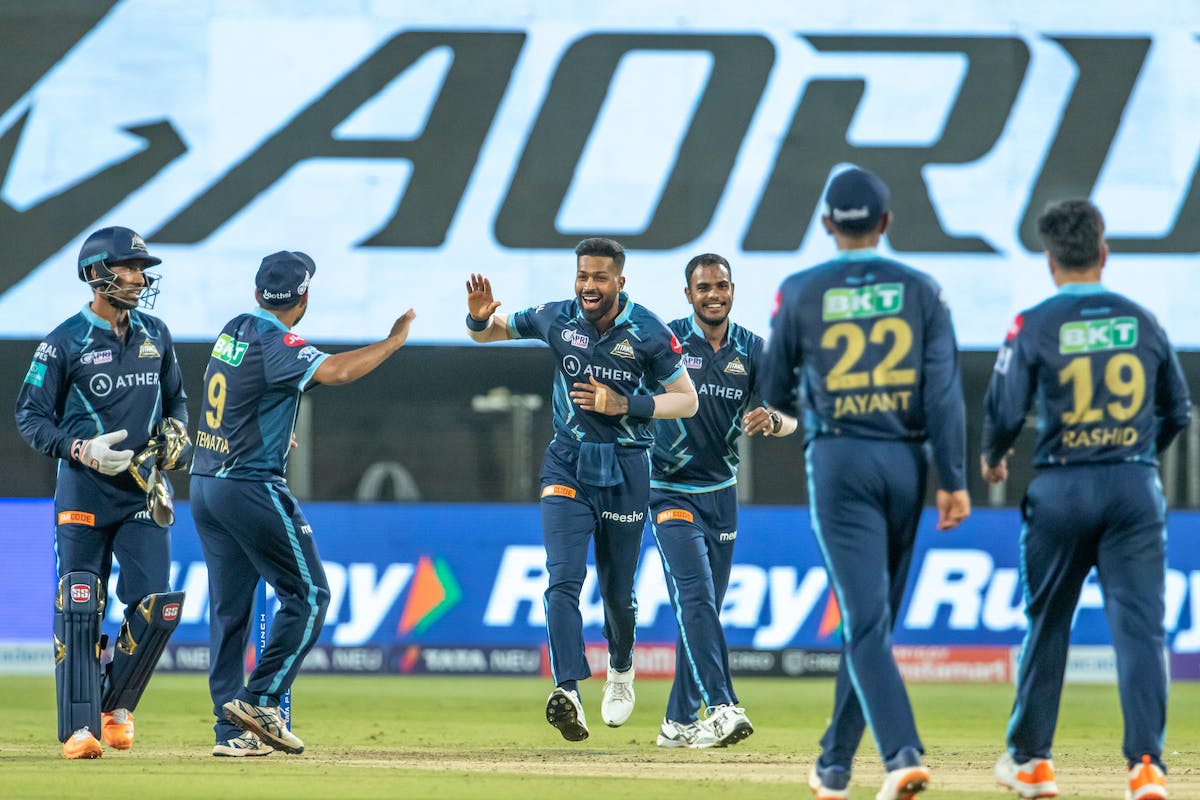 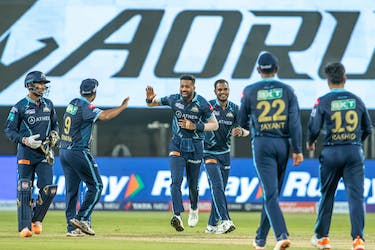 Gujarat Titans captain Hardik Pandya praised the collective strength of his team following their 62-run win over Lucknow Super Giants on Tuesday. The win also ensured GT's spot in the playoffs of IPL 2022, with two more matches to go in the league stage.

"Really proud of the boys. When we started this journey together, we obviously believed in ourselves, but before the 14th game to have qualified, it's a great effort and really proud of us," Pandya said at the post-match presentation.

After winning eight of their nine matches, Gujarat lost back-to-back games against Punjab Kings and Mumbai Indians. Pandya felt that the lessons from the MI loss, where they fell short by five runs,  served as a wake-up call for his side.

"I always feel when you lose a game like we did the last game, in a group what is important that you believe is we have won games as a team and we lose games as a team," he said.

Batting first, Gujarat put on 144/4 in 20 overs on a slow surface at the MCA Stadium in Pune. Pandya said he was confident of defending the total following Shubman Gill unbeaten 63 off 49 balls.

"The way everyone batted, especially Shubman, I felt with 145 we were in the game. Their bowling, I think they were a little too short. A little fuller length was working," he said.

Pandya said that the team was waiting to hand a debut to spinner R. Sai Kishore in spin-friendly conditions. The Tamil Nadu spinner, who came in for Sai Sudarshan, claimed 2-7 from his two overs.

"Sai, I've rated him as a left-arm spinner quite high. He's quite a technical bowler. Because of his height and his pace, he gets a little extra from the wicket. Because of the fast bowling attack, we were not able to make him play. But looking at this wicket, we thought if we can add a spinner with the right-handers, it'll make a big difference," Pandya said.

LSG skipper KL Rahul was not impressed with his team's batting performance as they were bundled out for 82 in 13.5 overs. The opener praised the bowling effort and felt that 145 was a chaseable total.

"We knew it was a tricky and challenging pitch. But we bowled really well I think. Restricting a team under 150 is really commendable on any pitch and the bowlers did their job," Rahul said.

"We should have batted a lot better. Some poor shot selections and a runout didn't help. Some good learning from this for us hopefully. A loss for this is not what a team wants but sometimes you need a little reminder to keep turning up every game and keep doing our best," he added.

Rahul said that the plan for him and Quinton de Kock was to take risks in the powerplay as the pitch aided bowlers later on.

"These low totals, you want to make use of the Powerplay. So for me and Quinton, it was about getting the team off to a good start, not necessarily getting off to a 60-run Powerplay, but at least get to 35 or 45 without losing too many wickets would have been ideal and set us up," he said.

Despite the loss, LSG remain second in the table as they aim to seal a playoffs spot with a win over Kolkata Knight Riders next Wednesday (May 18).

"Batting, you get one chance and you can make a mistake. So you don't want to overanalyze a game like this. You want to learn from it and see how we can do better if we're put in a situation like this again," Rahul said.