Welcome back, Warner… Not that you ever left! 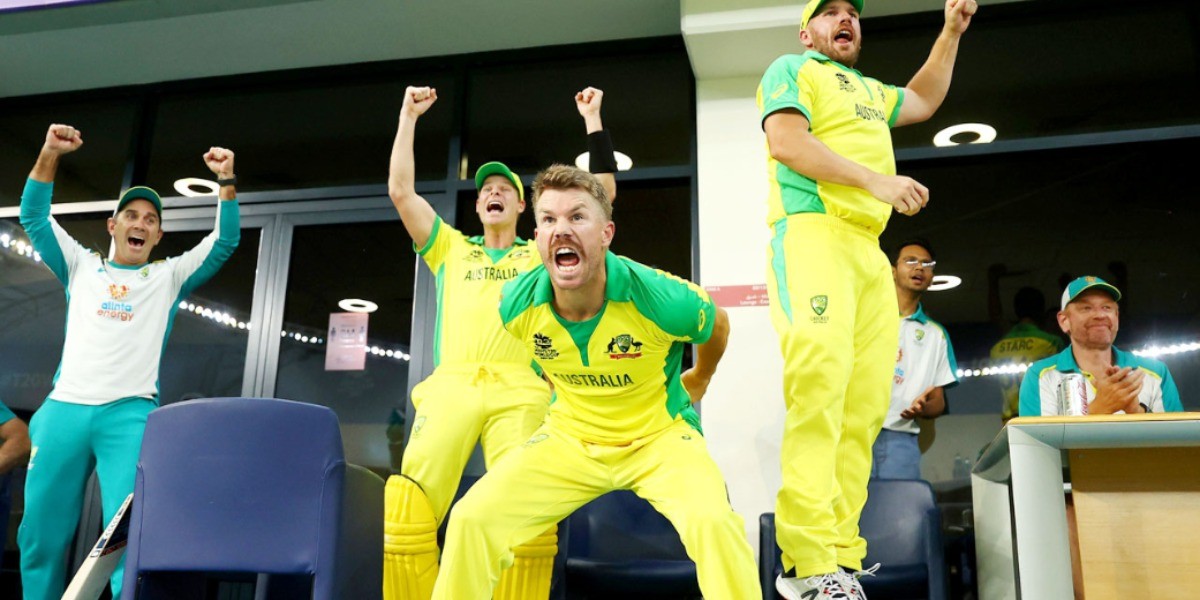 Welcome back, Warner… Not that you ever left!

"I actually think people talking about my form is quite funny. I laugh at the matter."

Well, Mr. David Warner, you can keep laughing! Keep laughing at your critics! And, keep laughing (joyfully) at what you and your teammates accomplished in Dubai on Sunday night! Oh, let’s make it early Monday morning if you are in Australia!

"Without a word of a lie, I promise you, I called Justin Langer a few months ago and said ‘don't worry about Davey, he'll be the man of the tournament". When his back is against the wall, that's when you get the very, very best of David Warner." The left-handed opener looked a shadow of his former self in the Indian Premier League 2021 but Australian white-ball captain Aaron Finch was always confident of his opening partner coming through in the clutch, which is exactly what Warner did in Australia’s last three encounters at the T20 World Cup 2021.

Coming into the showpiece event, Warner wasn’t too worried about his batting form and that was because he had only played eight T20s this year, which according to him was not a great sample size to judge someone’s form. All of those eight T20s came for his beloved IPL franchise Sunrisers Hyderabad, who not only stripped him of the captaincy mid-year but also dumped him from the team for their last five games. Yes, the same batter who hammered 3819 runs at an average of 52.32 and a strike rate 145 for them from 2014 until 2020. Just on the basis of a few bad innings, Hyderabad let go of arguably IPL’s best overseas batter.

From the outside, the entire chapter looked like a complete mess and it felt like even someone of Warner’s caliber might get bogged down under pressure. He is one of those rare batters who not only know how to consistently score runs in the shortest format of the game but also do that at a solid strike rate. He has been doing that for six-seven years and people have got used to seeing him deliver every single time.

However, things didn’t quite go as planned in IPL 2021 and it was difficult for everyone to digest Warner’s mediocre returns. The left-hander operated at a strike rate of just 107.7 in IPL 2021 but returned to his best in the World Cup. The 35-year-old ended the tournament as the second-highest run-getter and played a massive role in helping Australia win their maiden T20 World Cup title. 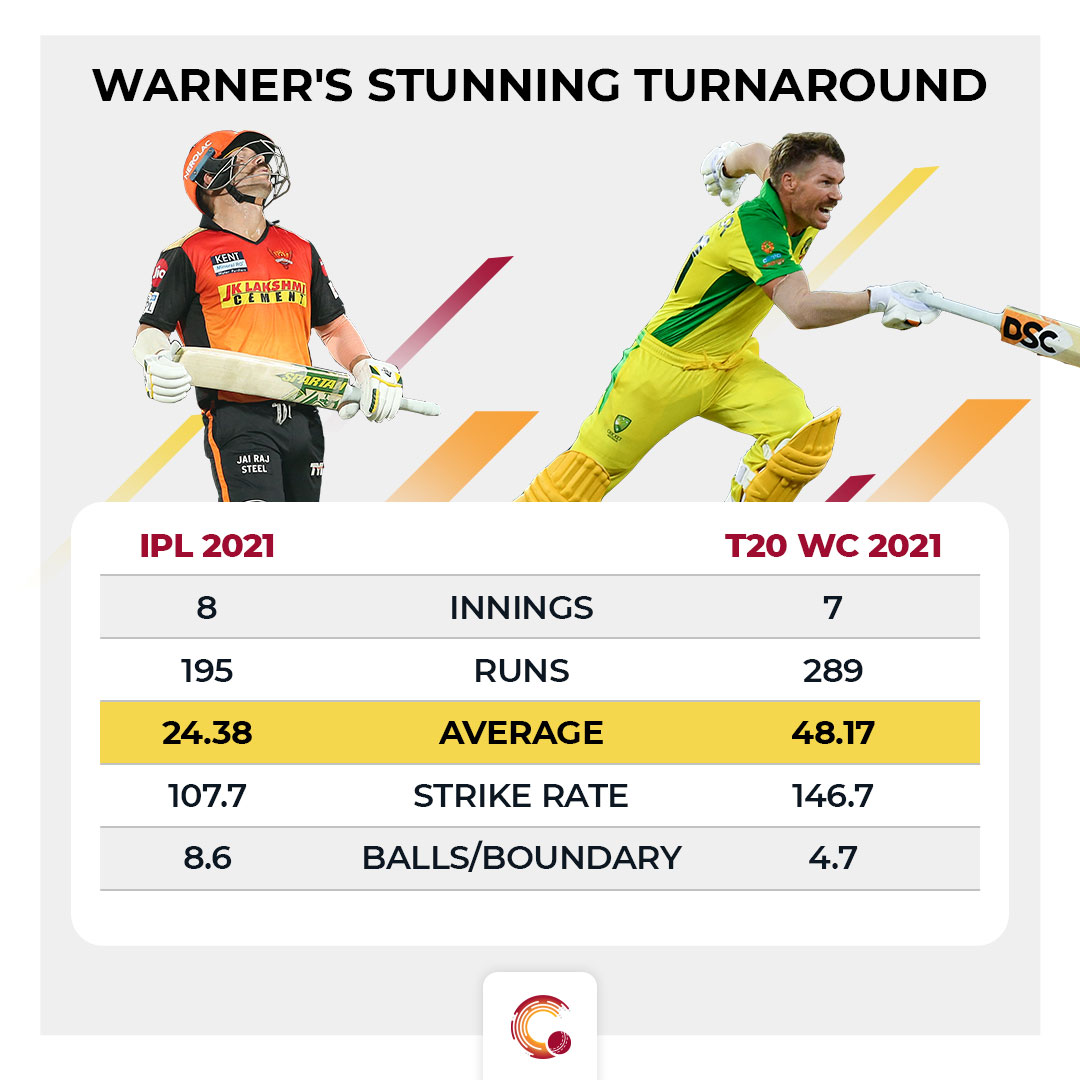 Considering he only played two games in the second half of IPL 2021, the two warm-up matches against New Zealand and India were crucial for Warner in order to get some batting time. Howbeit, he was dismissed for a duck against the Blackcaps and could only manage one run against India. Australia started their campaign against South Africa and Josh Hazlewood and Co. restricted them to 118/9. Warner once again had a perfect platform to get back into the groove and even started the innings with three authoritative boundaries. The opener scored 14 before getting caught at backward point.

That knock allowed him to carry some momentum into the next encounter against Sri Lanka and Warner (42-ball 65) finally made his presence felt. The flamboyant batter from New South Wales took the attack to Dushmantha Chameera and Lahiru Kumara and helped Australia chase down a tricky total of 154. It felt like Warner had found his rhythm and was set to tee off in the upcoming games, but low scores of 1 and 18 against England and Bangladesh once again started raising question marks. Having averaged 21.5 across four T20 World Cups, the pressure was on Warner to deliver in the next three must-win games and boy he delivered. 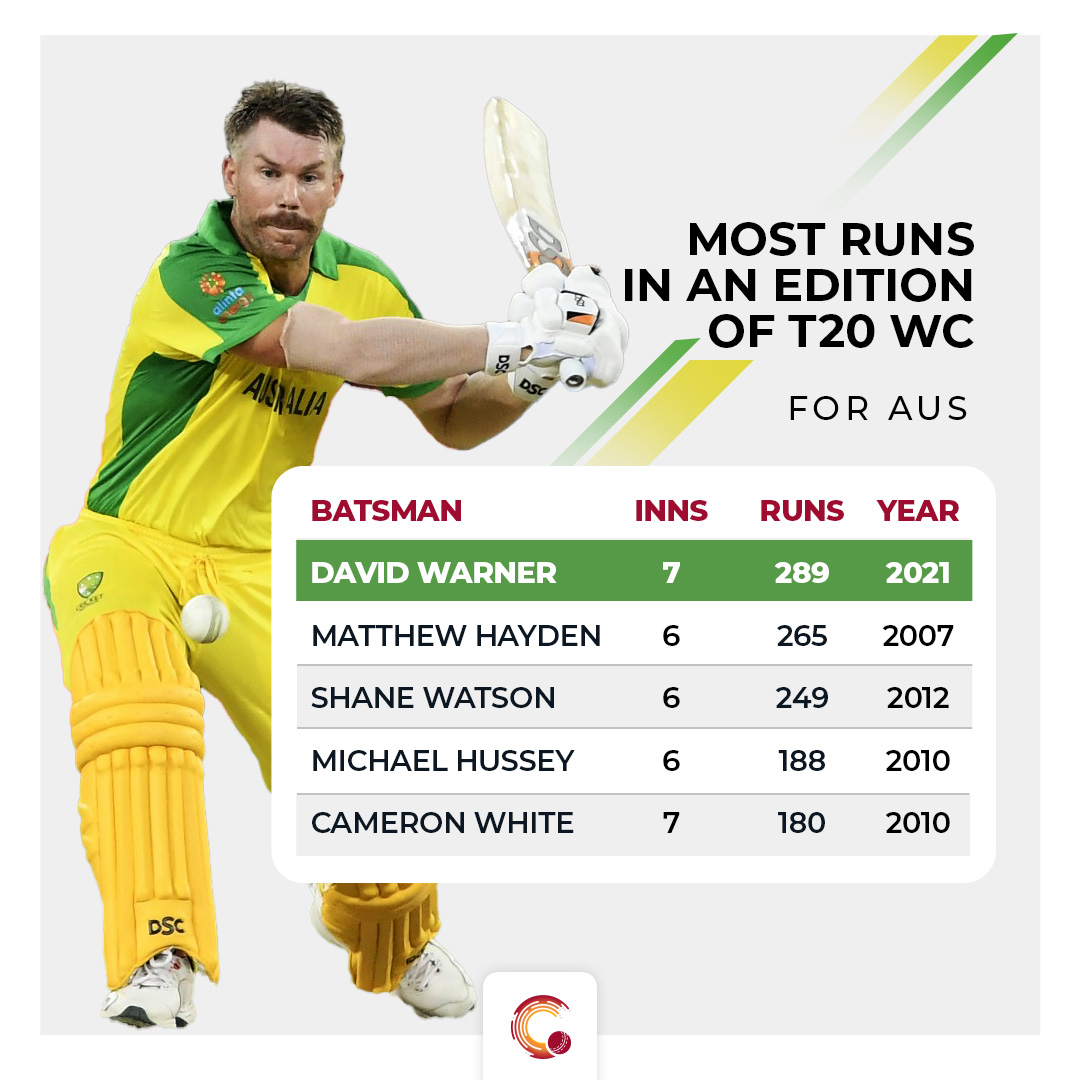 The Aaron Finch-led side had to win their final group-stage match against West Indies to qualify for the semis and they had to do it with a decent margin to make things more difficult for South Africa. The Men in Maroon managed a competitive score of 157 but were unprepared for what was about to hit them. The Reverend of the Australian team had a point to prove and he did that by smoking 89* off 56 deliveries, a knock studded with nine fours and four maximums. He slogged Hayden Walsh out of the park and then played a switch hit off Dwayne Bravo and for a while, it felt like we were watching Warner of 2009-2010 who wanted to prove everyone wrong.

Then came the semi-final against unbeaten Pakistan and Matthew Wade and Marcus Stonis hogged all the limelight by smashing 62 runs in the last five overs to help Australia snatch a victory from the jaws of defeat. Before the two went berserk, Warner (30-ball 49) took on the likes of Imad Wasim, Mohammad Hafeez and Shadab Khan inside the first 10 overs and kept the required rate in control. Oh, he could have carried on if he would have reviewed his caught behind. The left-hander was very smart with his approach and did allow the match-ups to come into play against Pakistan and West Indies. His innings in the semi-final went a bit under the radar but such was not the case in the grand finale against New Zealand.

His SRH teammate and New Zealand skipper Kane Williamson showed his class in the first innings and propelled his team to a challenging total of 172. The pressure was now on Australia and Trent Boult and Tim Southee were always going to be threatening with the new ball. Finch couldn’t do much but Warner stepped up once again and put on 92 runs for the second wicket with Mitchell Marsh. He was dismissed for 53 but the game was very much in Australia’s control by the time he left. It was Warner who titled the momentum in Australia’s favour by clobbering Ish Sodhi for two fours and a six in the ninth over. This is what Warner does, he goes after the spinners, against whom most of the Australian batters struggle. 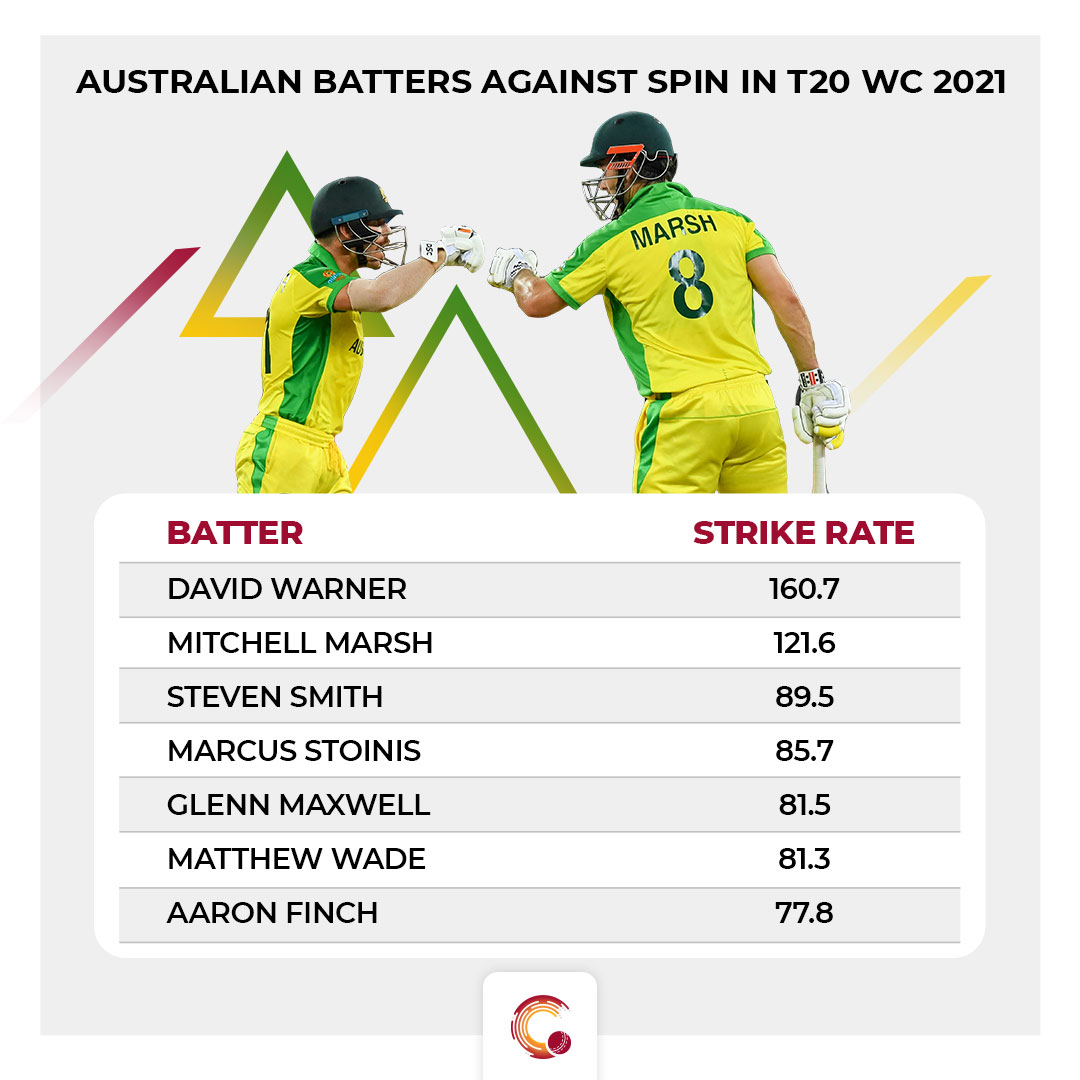 Prior to the World Cup, Australia lost eight of their 10 T20Is in West Indies and Bangladesh and that was largely because of their inability to play spin. Marsh was the only batter who got some runs in the two series and even in the T20 WC, he was the only Australian batter apart from Warner to have a strike rate of more than 100 against spinners. Even then, Marsh (121.6) was no match to Warner (160.7). Amongst batters who scored at least 50 runs against spinners in the Super 12 stage, Warner had the second-best strike rate against them after Shoaib Malik (205.7).

He is now on the wrong side of 30 but is showing no signs of slowing down. His future with SRH might be uncertain but there’s no uncertainty about his prowess as a T20 supergiant. Warner is a true family man off the field and won't be too worried about his future and neither should we.

For now, he can keep laughing! And, maybe can keep dancing down/on the track, both on and off the field!